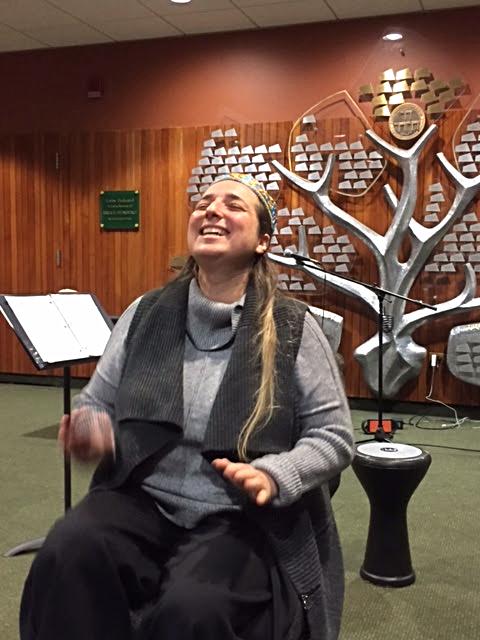 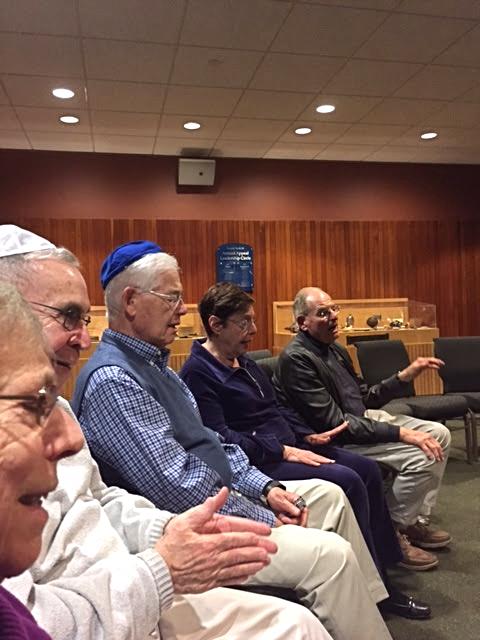 This evening, we bring in Shabbat and also enter the month of Shevat, a time to begin literally planting the seeds in anticipation of Spring.  This week's to do list:
- Have you gotten your Temple Rock reservations in yet?
- Join us for services this evening, with guest musician Cantor Ellen Arad joining Cantor Fishman, Assaf Gleizner and myself.
- Join us tomorrow for our main service at 9:30, Shabbat School and Shababimbam, culminating in lunch for everyone!

An Oasis in the Sky 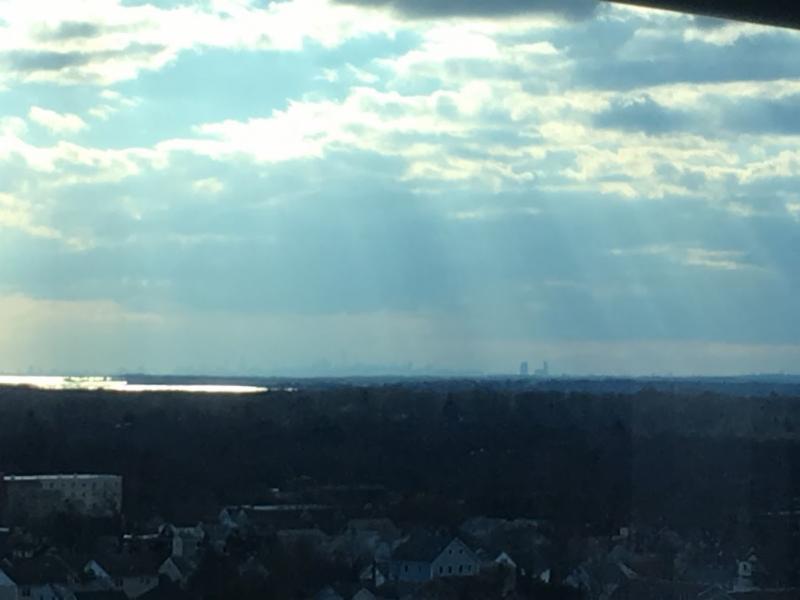 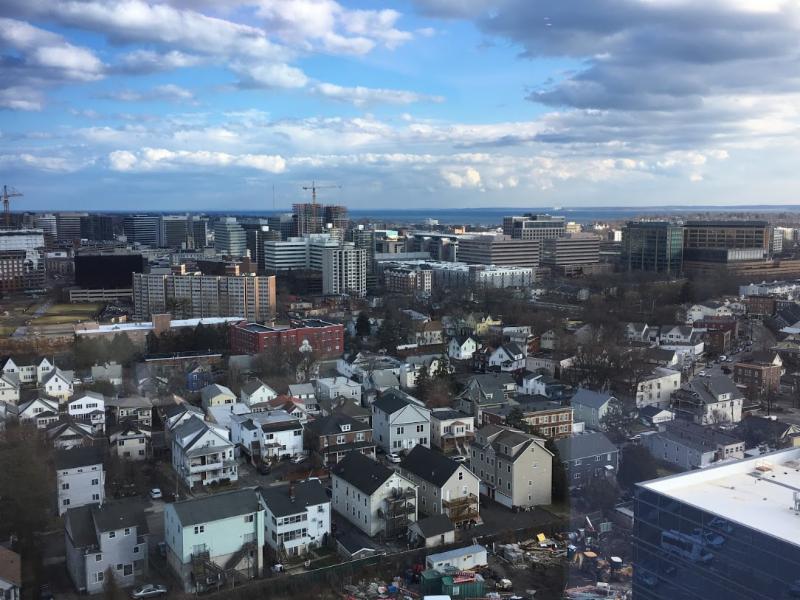 Carol King, James Taylor and the Drifters all knew what to do "when this ol' world starts a getting you down." They found comfort and calm "Up on the Roof."  And now, so do I - in the most ironic places: a hospital.  The new Stamford Hospital's upper floors are not entirely placid, and there's a good deal of sadness and pain in those rooms.  But look out the window and see Stamford unfold before you - and then over at the Sound, and the New York skyline in the distance.  The view of Manhattan was other-worldly yesterday afternoon - the photo above doesn't begin to capture how the cloud-directed rays of light from the late afternoon sun turned the miniature, distant skyline into what looked more like a gateway to heaven.  There are also quiet rooms on those upper floors, meant for families and the occasionally hassled clergy, complete with a massage chair.  So thank you to the new Stamford Hospital, and the oasis that can be found up-on-the-top-floors.

A couple of weeks ago, I announced my Jos-car nominations in this space, looking at the year's best films from a Jewish lens.  I followed up with an analysis of "La La Land," a film often called escapist that is in truth aspirational and transcendent, much like Judaism itself.

Now let's take a look at four other acclaimed films that could not be more timely: "Moonlight," "Hidden Figures," "Loving," and "Fences."

The Academy Awards' diversity problem was somewhat alleviated, as six African American actors received nominations this week, and several films addressing institutional racism both past and present were recognized with major nominations.

In films like "Moonlight," "Hidden Figures," "Loving," and "Fences," we confront the significant social obstacles faced by a young gay African American coming of age in Miami, three extraordinarily qualified female scientists-of-color in 1960's Virginia, an interracial couple in 1960's Virginia (Virginia evidently, wasn't for Lovers until later) and a hall-of-fame caliber black baseball player from Pittsburgh (Virginia gets a reprieve here) who was denied a chance to fulfill his dreams.

In some cases, these protagonists prevail over the overwhelming odds, and in others, their tragic predicament overwhelms them.  There is biblical precedent for this.
This week's Torah portion of Va-era funnels us through the experience of Israelite slaves struggling to surmount the burdens of unremitting servitude, which, in the words of the Ostrovtzer Rebbe, left the Israelites depressed, drained of their desire for hope and freedom.  They were beaten down, body and soul.  This early twentieth-century rebbe understood the ravages of suffering.  He rejected nearly all of life's pleasures - and fasted for forty years.  The Ten Plagues, seven of which are found in this portion, were intended to instill confidence, lifting the spirits of the Israelites every bit as much as they knocked the Egyptians down to size.

Racism has crushed the American spirit in a similar manner, rendering us numb and helpless as we grope to address a problem that just never seems to go away.  Time never has been able to heal the searing pain from that wound.  The pain exists on all sides.  The wrongs can never totally be righted.

In this new era, where the KKK shows up to rally in support of the Attorney General nominee and the "Small-Caps kkk" is now being accepted in polite company, we need to remind ourselves that the rights gained by the Lovings and their contemporaries are fragile indeed.

At a time when proven facts are being portrayed as annoying nuisances and the Trump Administration is doubling down on the fraudulent claim of mass voter fraud, these Oscar nominees are proving to be a protective barrier for the American conscience, the only wall we really need to be constructing right now.

If an inquiry is needed into voting irregularities, as President Trump now suggests, then the investigator's eye should be focusing on voter suppression and the fraying Voting Rights Act, rather than on spreading falsehoods about undocumented immigrants.
For that landmark 1965 legislation is all that separates us from a return to the days of rampant discrimination. Take a look at this nearly impossible Louisiana literacy test from 1964, which prevented legions of minorities from being able to vote.  Literacy tests, along with poll taxes and other forms of extra-legal intimidation, were used to deny voting rights to African Americans.  A number of these tests can be found online.

I'll bet not even the whiz kids of "Hidden Figures" could have passed them.  See how you do.

The pervasive need to address racial discrimination may be an inconvenient truth to some, but, from a Jewish perspective, an overwhelming moral case can be made for vigilance.  And it's a case that cannot be muddled by bogus investigations and "alternative facts."  President Trump likely doesn't realize it, but the fight we are waging is for him and his children - and his grandchildren too.

Like our ancestors in Egypt, Americans and Jews have lots of emotional scars to overcome.  But the schadenfreude of watching enemies succumb to vermin, frogs and cattle disease will not be nearly enough to save our national soul.  There will be no true victory until all parties can dance together on the shores of the Red Sea.

This quartet of acclaimed films celebrates the indomitable spirit of wounded warriors of an interminable struggle. "Moonlight," "Hidden Figures," "Fences" and "Loving" leave us heartbroken but resolute.  While none of these four movies may be "Best Picture" this year, they are all by far the most indispensable.

View and Share this on Times of Israel site