The Shabbat-O-Gram is sponsored by Anne Marie and Mario Segal in honor of their son, Daniel, becoming a Bat Mitzvah this Shabbat. 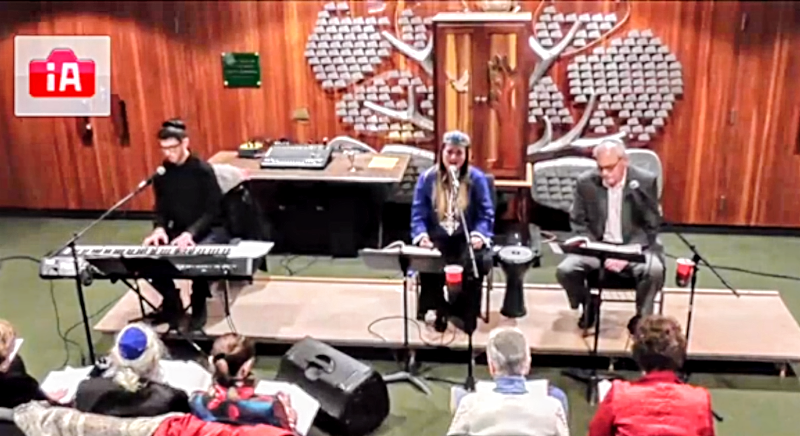 Last Shabbat for the first time, we beamed our Kabbalat Shabbat services out into the universe LIVE on Facebook.  As of today, the service was viewed, live or archived on Facebook (and the host site) over 2,000 times! If you can't be here tonight at 7:30 (always the best choice), go to our Facebook page (Temple Beth El (TBE) Stamford, CT) or click here for the live broadcast.  And please share our service with your friends.  To see our Hanukkah/Winter photo album, click here.

Mazal tov to Danny Segal and family as he becomes our first Bar Mitzvah of 2017!

Join us this evening and tomorrow for fabulous Shabbat services, including, for families with young children, another Shababimbam (see flyer here) with lunch!

We always have interesting conversations at Shabbat morning services.  Last week's relating to the Torah portion and Joseph's transformation as a public figure, revolved around the need for transparency and privacy in public life.  See the Parsha packet and discussion guide here.  What's particularly interesting is how the traditional commentaries try to rationalize Joseph's deception in hiding the truth about his identity from his brothers.  If you are looking for chance to immerse in relevant conversations about Judaism and values, join us on Shabbat morning! And don't forget that our series, "This Ethical Life (see flyer here) resumes this coming Tuesday and Wednesday.
Jewish Arts

For those interested in bringing a Jewish Arts Festival to Stamford for our kids and teens, (see flyer here) join us at 11:30 AM this Sunday morning for a brief organizational and planning meeting.
Secrets of the Warsaw Ghetto

Save the date of Feb 9 for a fascinating talk by Dr. Samuel Kassow, who discovered a hidden archive of material from the Warsaw Ghetto (see flyer here).  Kassow also helped to design the exhibitions at Warsaw's new Polin Museum of Jewish history, which we will be visiting on our Jewish Heritage tour this summer. The registration deadline is fast approaching:  For more information on the trip, see the group's website.
Do the Jews Control Hollywood?
Introducing the Jos-car Nominations

This Sunday's Golden Globes brings us to the heart of the awards season. See the nominees here.  So this is as good a time as any to reflect on some of the films that have come out recently.  In between funerals, services and brisses, I've managed to have seen a number of good ones and feel a need to add one more category to the awards mix, one emphasizing the Jewish content of the film.

I call these the "Jos-car Nominations."  Combines my name with "Oscar."  Get it?
By "Jewish content," I'm not necessarily pointing to the contribution of particular Members of the Tribe, as stars, producers, directors, writers or, for that matter, gaffers of any given film.

Incidentally, have you noticed just how many gaffers, grips and best boys are Jewish?
Neither have I.
The criteria for a Jos-car nomination is simple: the Jewish aspect of a film can include Jewish subject matter, Jewish values, or Jewish participation.  With these criteria, you can find something "Jewish" in almost every film.
Every film?  Jewish?  This brings to mind the classic anti-Semitic claim that "the Jews own Hollywood."  Of course that is ridiculous, but not for the reason you might think.
If the claim is that Jews are significantly represented at all levels in the production and dissemination of culture, which includes movies, books, music, drama, journalism, dance, the visual arts and the humanities, my response is "guilty as charged."  Jews have been disproportionately involved in these areas for a number of reasons, including the traditional values of inquiry and curiosity (think "Four Questions"), an age-old preoccupation with social change and justice and engagement with this world (as opposed to a preoccupation with the afterlife), along with our unique position at the margins of society and longstanding position bridging cultures across the world.
The ridiculous part is the usage of the world "the" in relation to "Jews," as if to imply that Jews are a single, coherent, conspiratorial group.   Anyone who tries to lump all Jews into one unified group clearly doesn't know Jews.  And you know, that's precisely the problem. If only Jews were united enough to smoothly run a lemonade stand, much less an entire cultural industrial complex!

Those who subscribe to grand Jewish conspiracy theories are typically those who have the least familiarity with real live Jews.  The ADL's Global survey of 100 nations discovered that people living in countries with larger Jewish populations are less likely to hold anti-Semitic views than people living in countries with smaller Jewish populations.  The same is true of places in America. It's true with other groups too: familiarity reduces bigotry.  In this case, absence makes the heart grow hateful.

But I will say this - proudly.  The influence of Jewish values, those principles Jews have long held sacred, has been most profound on the American cultural scene.  If you want to see what values I'm talking about, see my Mensch Marks series from this past High Holidays.

These values, which are neither exclusively left nor right, but  Jewish through and through, include humility, love and freedom and dignity.  They clash markedly against the "values" of the "traditional" anti-Semite, who, as defined by the US Holocaust Memorial Museum, tends to be xenophobic, anti-intellectual, populist, racist, brutish and, if unchecked, ultimately genocidal.

And here's the rub - the part that drives anti-Semites absolutely bananas.  The influence of popular culture, in this country and throughout most of the world, continues to be far, far more pervasive than that of any government or branch of government.   When Chief Justice Roberts (who is decidedly not an anti-Semite) wrote about the "undeniable appeal" of arguments of social fairness and equality in the 2015 same-sex marriage case, he was speaking of the undeniable influence of TV programs like "American Family" and films like "Loving,"  whose influence on the culture will continue to be profound.

So when anti-Semites say "The Jews control Hollywood," or "The Jews control the media," they are really cursing the fact that their agenda can never achieve the ultimate triumph they seek until the instruments of culture are co-opted.  And, yes, I can proudly say that Jews are continuing to hold up our end of the bargain, not by owning Hollywood, or by propagating any particular agenda, but by driving haters crazy.

Which brings me to my Jos-car nominations for 2016.

My nominees for "most Jewish film," in no particular order are:

I recommend them all - several are top Oscar contenders.  I also left out a number of movies that I really liked (eg "Fences,") that just couldn't make the cut from my subjective Jewish perspective.  I'd also have loved to include "Woman in Gold," and "Gett," but they aren't recent enough.  But hey, that's why they make Top Ten Lists - to force some hard choices.

I'll explain what I found to be "Jewish" about these films as we get closer to the Oscars.  In the meantime, I invite you to share which film you think is the best - and the most Jewish - film of 2016.   Israeli films like "Sand Storm," BTW, are now plentiful on Netflix.And I reserve the right to alter this list, whether because I see another film that should be there (haven't seen "Miss Sloan" or "Hidden Figures" yet) or because you convince me that I left something worthy out.

Last week I shared links to a number of opinion pieces covering different aspects of recent events involving Israel.   Today I share some more.  Given the propensity of noise and lack of respectful dialogue out there,  as well as the complexity of the issues, I offer the following:  If you are looking for a little balance and not simply to accumulate talking points, I suggest you read at least one column from Column A and from Column B.
COLUMN A
US House Votes to Condemn UN Security Council Resolution (Washington Post)
The Biggest Sin on the Planet: Jews Building Houses (LA Jewish Journal)
The Israeli Left Should Endorse Moving the US Embassy to Jerusalem (Ha'aretz)
Palestinians Hate Blue Israel Too (Commentary)
COLUMN B
Congrats on Burying the Two State Solution, President Trump:  Now What? (Forward)
David Ben Gurion Agreed with John Kerry's Speech (Facebook post by Gershom Gorenberg)
Israel and US Move Right - Away from Most American Jews (Arnold Eisen, JTS Chancellor)
Any Love Unaccompanied by Criticism is Not Love at All:  America, the UN and the Future of Israel (Rabbi Jeremy Kalmanofsky) - As a fellow Conservative rabbinic colleague struggling to articulate his position with sensitivity and wisdom, this piece resonated with me.

MEANWHILE, IN OTHER NEWS...
Hebrew Union College hit with Swastika Graffiti
Jewish Museum Poster Defaced with Swastikas in NY Subway Station
And for a little change of pace...some good news:
ADL's Ten Most Inspirational Moments of 2016
Israeli Breathalyzer Diagnoses 17 Different Diseases in a Single Breath
Six Israeli Start-Ups that Want to Change Your Everyday Life
On this week's manslaughter conviction of Elor Azaria
Elor Azaria and Israel's Moral Core (Times of Israel)
To Pardon the Rebellious Son (Times of Israel)
I Wrote the IDF Ethics Code: Here's My Take on the Hebron Shooting (Forward)
Shabbat Shalom!