Shabbat-O-Gram for Aug 29: A Flood of Biblical Proportions

I'm sending this week's O-gram out early in anticipation of the long holiday weekend and in response to the terrible flooding in Texas and Louisiana.  Join us for services this Friday night at 7:30 and Shabbat morning at 9:30. Minyan on Sunday and Monday this week is at 9 AM.

The Interfaith Council of Southwestern Connecticut and the United Jewish Federation of Greater Stamford, New Canaan, and Darien strongly condemn the defacement of the Academy of Information Technology and Engineering building in Stamford with Nazi and racist symbolism.

This action denigrates our community and all efforts to live peacefully, respectfully, and honorably. We stand with those communities targeted and threatened by such actions, particularly the Jewish, Muslim and African-American communities.

We will not remain silent when these affronts to our common humanity occur. Our religious traditions call us to speak out and to act. When one of us is attacked in such a way, we all are attacked. 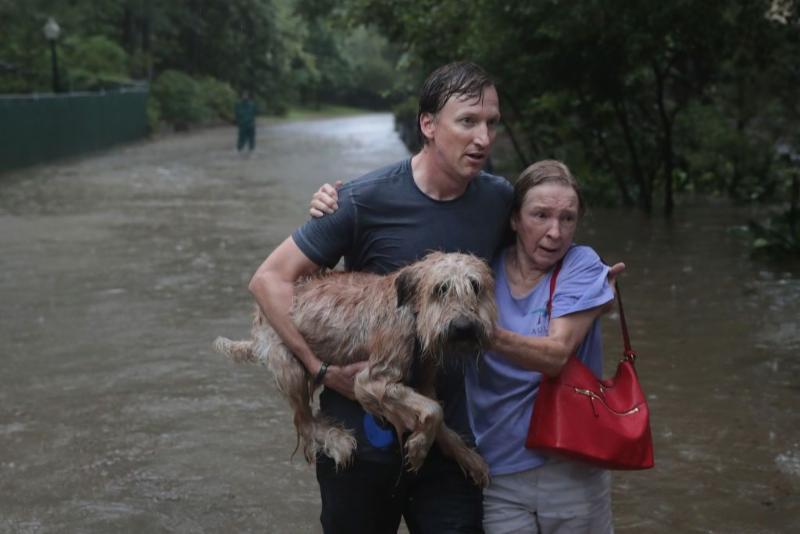 While as a rabbi I would prefer that the Bible not be seen simply as a book where horrific events occur, there is almost no other way to describe what is happening along the Gulf Coast, particularly in and near Houston. We are witnessing scenes that we never imagined could happen, as one of America's great cities has literally been submerged.  We've also seen acts of unbelievable bravery and tragedies of bottomless sadness.  Our hearts go out to everyone suffering there.  We at TBE, remembering how we had to open up our synagogue to refugees during Sandy, feel their pain.

This prayer was written on their behalf by my colleague, Rabbi Menachem Creditor:

Elohei haRuchot, God of the Winds,
Fixated as we are by incalculable losses in our families, our neighbors, human beings spanning national borders, we are pummeled into shock, barely even able to call out to You.
We are, as ever, called to share bread with the hungry, to take those who suffer into our homes, to clothe the naked, to not ignore our sisters and brothers. Many more of our brothers and sisters are hungry, homeless, cold, and vulnerable today than were just a few days ago, and we need Your Help.
We pray from the depths of our souls and we pray with the toil of our bodies for healing in the face of devastation. We join our voices in prayer to the prayers of others around the world and cry out for safety. We look to the sacred wells of human resilience and compassion and ask You for even more strength and hope.
God, open our hearts to generously support those determined to undo this chaos.
God, be with us as we utilize every network at our disposal to support each other. Be with First Responders engaged in the work of rescue as they cradle lives new and old, sheltering our souls and bodies from the storm. Be with us and be with them, God.
Be with those awaiting news from loved ones, reeling from water and wind that have crippled cities, decimated villages, and taken lives. Be with all of us, God.
Be with us God, comfort us, and support us as we rebuild that which has been lost.
May all this be Your will.
Amen.
While the devastation has affected everyone, as Jews it is natural for our concern to focus first on "our own" and then for it to radiate outward.   The rule of thumb, as delineated in the Talmud (see the verse) is offer charity first to the "poor in your town" and then extend the caring to places farther away, with the exception being those who are in the Land of Israel, who also receive priority attention. So let's draw those circles of caring, beginning with our fellow Jews.

The Jewish community of Houston has been devastated by the storm and its aftermath, and the extent of damage is still not known.  There is no more Kosher food to be found in the city - a relatively small nuisance, when compared to concerns of life and death, but indicative of how desperate things have become.  The Jewish Federation of Houston's Facebook page can give you the latest information on what is happening, what the community needs and where to donate.  Amazingly, they are open today.
Steve Lander has heard from the exec of one of Houston's Conservative shuls via the executive director's listserv.  Here is today's dispatch

Still raining, but beginning to taper off in Houston.  Waters subsiding in most places.  Storm is sliding east toward Louisiana.  East Texas and West Louisiana are getting what we got.  Wishing and praying for them.
Now that the roads are clearing somewhat, the work is beginning.  We started drying the synagogue (Beth Yeshurun) today.  This will continue for several days.  Then the demolition of damaged areas, and after that the renovations.  Days will turn into weeks, weeks into months.
Larry's synagogue (Brith Shalom) is hosting us this weekend for our Bat Mitzvah.  Thank you, Larry and Brith Shalom.  We are still trying to figure out the future.  We won't be in our own shul for Rosh Hashanah, but we'll be somewhere.  Can't move the date so we'll have to move the congregation.
Many of you, and others around the country have asked about how to help, both with donations and volunteers.  Our community is still assessing the volunteer issue.  Until it's safe for people to drive everywhere, volunteers will have to be patient.  Based on the last couple of floods, we'll need volunteers for a couple of weeks.
The donations issue is different.  In the past Beth Yeshurun has always been in a position to help others.  Now, we need help.  The question of where to donate has to be answered by the donor - help individuals (by donating to the community fund - our Federation at houstonjewish.org) or help the synagogue.  We don't know exactly what our needs will be.  We have good insurance, but it won't cover everything, and our indirect losses will be substantial.  If people would like to donate to the Beth Yeshurun for synagogue needs, we will be accepting donations to the Beth Yeshurun Flood Recovery Fund, c/o Congregation Beth Yeshurun.
Thanks for all of your prayers and support.  Houston will recover.  Hope to see you in Israel.
Lu Dorfman, FSA
Executive Director
Congregation Beth Yeshurun
4525 Beechnut Street
Houston, TX. 77096
The circle grows wider, to include people of all backgrounds who are living in that region.  Be careful in giving, as there have been several scams.  Click here for an extensive and vetted list of organizations helping the people (and pets) of that region.
And the circle gets wider yet, for there is one additional region of concern this week. The relentless monsoon flooding in South Asia has resulted in well over a thousand deaths thus far.  Many have been quoted as saying, "We're used to flooding, but we've never seen anything like this in our lives."

If it is hard for you to summon up just a little more compassion for people half a world away, watch this BBC video.  And to emphasize that we are all connected, read from the Times of India about how Indian students had to be evacuated from their living quarters in Houston.

One wonders, evacuated to where?  If they are headed home, I'd keep the boots on.

This has certainly been the summer of living biblically.

When we are routinely talking about one-in-500 year events and 1000 year events, as we are, we know that something scary is happening to our planet.  We at TBE have been doing our part to raise awareness, through our award winning solar roof project and our upcoming endowment and capital campaign that will focus on sustainability, but recent events signal that much more needs to be done in the face of a truth that is not merely inconvenient - it is incontrovertible.

For now, though, the focus remains on the immediate needs of those who are trapped, hungry, wet and cold, as we do all we can to return a sense of normalcy to their lives.

Then the channels of waters were seen, and the foundations of the world were discovered at your rebuke, O Lord, at the blast of breath from your nostrils

Notice how verse 17 completely reverses the sentiment of the prior verse.  God, the source of the raging waters, becomes the force within each of us that drives us to help, to reach out and save those who are struggling in those same waters.  And the word for "draw out" in Hebrew contains the root letters for the name Moses (Moshe), the one who was drawn out of the Nile by a total stranger - ostensibly an enemy - Pharaoh's daughter.  Our people's history began with an act of kindness by a stranger,  the saving of a child from raging waters, the same act being repeated time and again this week.

To live biblically is not to bear witness to divine rebuke, but to be an instrument of divine salvation, to help draw the suffering out of the waters.

To live biblically is to be part of the solution, not to add to the problem.

To live biblically is to save the suffering in Texas, India and everywhere else in our parched and flooded planet; because we have all become one community.  There is now really only one circle to draw, that beautiful blue orb called earth. (Click below to see a stunning time-lapse video of earth taken from one million miles away)

Shabbat Shalom and have an enjoyable Labor Day