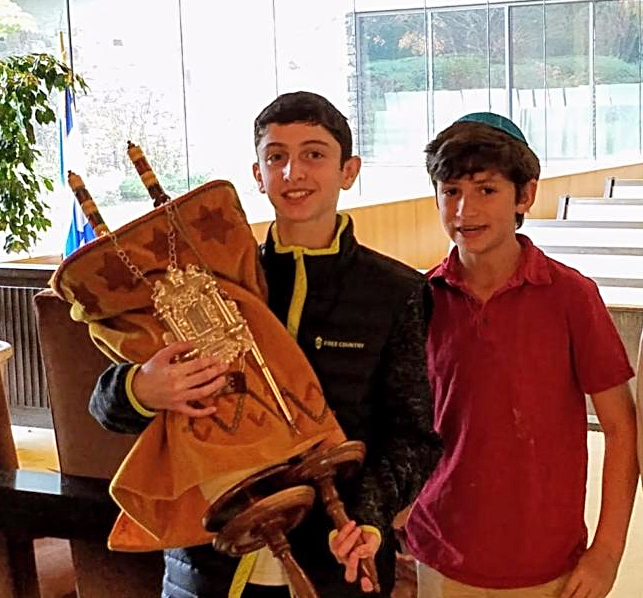 Mazal tov to Samantha Laichtman and family as she becomes Bat Mitzvah this Shabbat morning.  Join us also on Friday night, and next week too (next week is Rock Shabbat!).  And see last week's d'var Torah by Julia Marrinan. 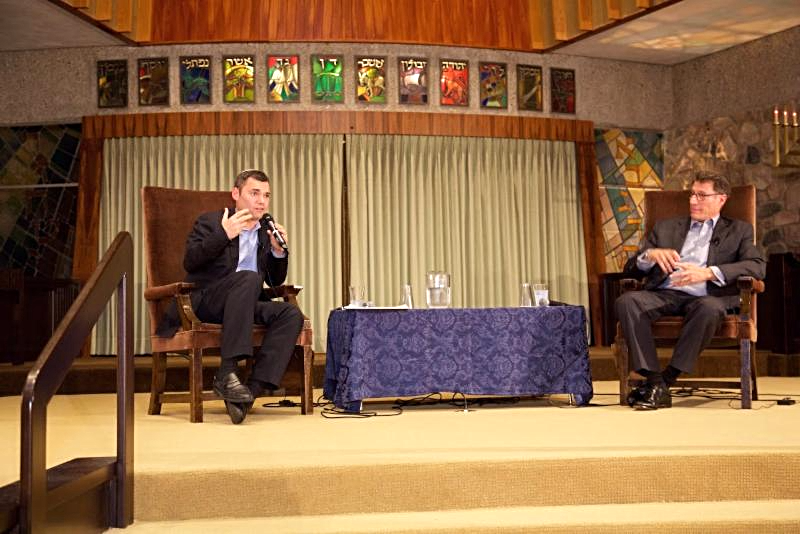 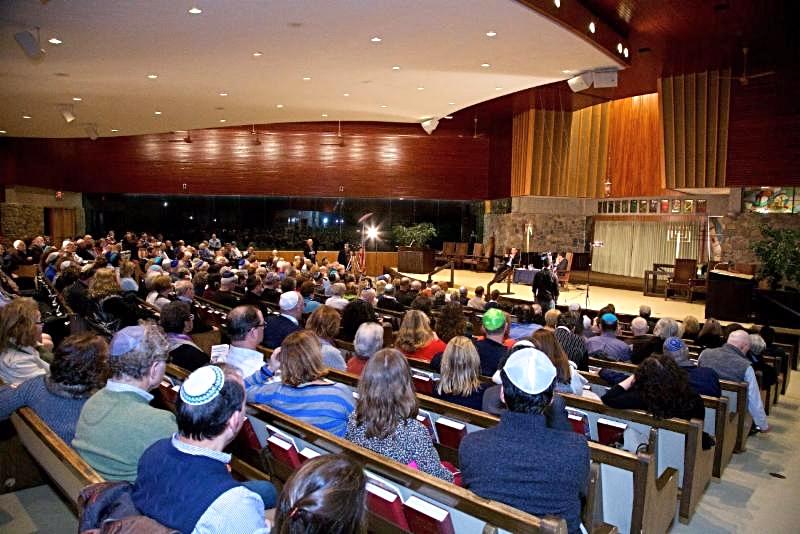 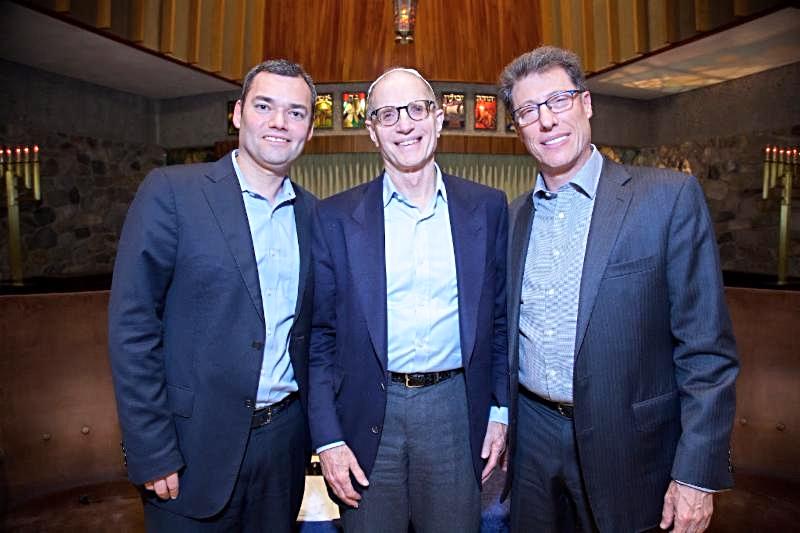 This week's Hoffman lecture filled our sanctuary, both with people and with passionate but respectful dialogue about Israel.  People have been commenting that it was one of the best ever, and that's a very high bar to have surpassed.  Both speakers were articulate and convincing - there were many "He's right and he's right moments," even on some issues where they were diametrically opposed.  They also agreed on more issues that one might have expected.  The conversation was taped for broadcast on JBS (Cablevision channel 138).  I will let you know when it is going to be shown.

There were a number of key takeaways, including Gordis' sobering assessment of the grave possibilities of a potential war with Lebanon and Beinart's reflections on why American Jewish college students are completely unprepared to deal with anti-Israel sentiment on campus.  Both had interesting points about whether Israel or America is facing the greater threat to their democratic values.

You can find many of these issues discussed on the Fault Lines podcast web page.  I would love to hear - and share - what points you thought were most interesting from Thursday's event.  I'll inform everyone as soon as I know when the talk will be broadcast on JBS.

Kristallnacht and Larry David:  Too Soon?

Today is Kristallnacht plus 79 years, the end of the seventh decade since the Holocaust unofficially began with the Night of Broken Glass. Here is some background on this foreboding event, from the Jewish Virtual Library.  With the completion of seven decades, has a threshold been passed where the Holocaust is no longer to be seen as "recent" and must now be considered exclusively to be in the past tense?
According to the Urban Dictionary, "too soon" is "a phrase used to respond to someone making a comment that was intended to be funny, but touches on subject matter that shouldn't be joked about, usually because it was a recent event (being in the last decade or so).

When a joke is no longer considered "too soon," we know that a threshold has been passed.  That might be the best indicator that we've reached a different moment in the perception of an event.

It might always be "too soon" to joke about certain elements of the Holocaust.  But the same thing might have been thought regarding the Lincoln assassination until someone uttered sometime in the 1950s, "But how did you like the show, Mrs. Lincoln?"  Some say the joke came from a New Yorker cartoon, others say it was from a comedian like Tom Lehrer or Bob Newhart.  Either way, we're talking about nearly a century before it was not "too soon."

With the Holocaust, that moment might have come last weekend, when Larry David went on Saturday Night Live and talked about the absurdity of coming up with good pickup lines at a concentration camp.  The monologue was met with considerable shock from the Jewish community, even though it hardly is the first time the Holocaust had been a source of humor by Jews - but most of the prior jokes had been told at the expense of the perpetrators rather than the victims.

When I heard David's quip, I recoiled at its insensitivity, instinctively saying to myself, "too soon."  But then I reflected for a moment about the shock I was feeling that this joke was "too soon." Was it because survivors are still among us and that it actually is still "too soon?" Or did I gulp so hard at the realization that the "too soon" moment had just passed before my eyes.  It is no longer "too soon" to usher the Holocaust into the realm of normalcy, to treat it as history, to begin to remold it, rethink it, and even play with it, and in doing so, to re-imagine the Judaism that the victims bequeathed to us.

In fact, Larry David's monologue was just the most visible eruption of something that has been slowly boiling beneath the surface as a new generation of writers and artists has come of age.  In Shalom Auslander's angry, narcissistic, yet shockingly brilliant memoir "Foreskin's Lament," published a decade ago, in 2007, he describes the horrible way his parents inflicted guilt as "going Holocaust" on him, as in "Do you know how many Jews died at the hands of the Nazis so you can keep kosher?"  The Holocaust itself becomes a character in the narrative: "Mr. Holocaust," he calls it, the bearer of eternal Jewish trauma. Auslander is numbed by the naked bodies in the newsreel footage he watches at school assemblies. He struggles with the horror even as he trivializes it, out-Rothing even Philip Roth in his cynical detachment.

Similarly, in the documentary "Kike Like Me," also released in 2007, Jamie Kastner takes us on a sophomoric, self-indulgent road trip through the Jewish world, culminating with a visit to Auschwitz. It is an infuriating yet revealing window into the YouTube generation at its most cynical and most shallow. Borat meets Buchenwald. Kastner, like Auslander, is simply one lost young Jew trying to figure out how this big Holocaust piece fits into the rest of the puzzle known as Jewish identity. It's a big piece, but it's just another piece.  Even Larry David might have recoiled to read this bit of "humor" from David Deutch's, as quoted in Heeb Magazine: "So I guess you don't think the Holocaust is funny. But I gotta tell you, it killed them back in Poland."

That's shocking, but no less so than Mel Brooks' "The Producers" was in 1967, when, for many, "Springtime for Hitler" came much "too soon."

The Holocaust has receded far enough into history to begin its assimilation into the larger Jewish story. This process is inevitable and for the most part beneficial. When we lose a loved one, the grief eventually gives way to "normalcy" - but not normalcy as it was before the person died. Instead, a new equilibrium forms, an altered worldview, in which the story of that departed relative's story becomes one with our own, imbuing our lives with added meaning.

The year 1648 was a dark one for Eastern European Jewry, as a Cossack revolt killed upwards of 100,000 Jews in Poland.  Almost exactly 70 years later, the Baal Shem Tov introduced the Hasidism to Polish Jewry.  In early Hasidic literature, his followers specifically drew a line from the ordeals of 1648 to their teacher's career, asserting that this charismatic leader "awakened the people Israel from their long coma and brought them renewed joy in the nearness of God."   Seven decades was precisely when it was no longer "too soon."

The folklore of the early Hasidic masters demonstrates that that the Cossack massacres were still very real to them, well over a century after they occurred.  Those tales are filled with the pathos of illness and poverty and loss - but they took that sadness and transformed it into song.  They could not succeed in doing that until a full generation had come and gone and few if any actual witnesses were left.  Otherwise, to sing and dance, as they did all the time, would have been to sing and dance on someone's fresh grave.

So, based on historical precedent, it makes perfect sense that after seven decades, the rabbinic equivalent of a lifetime, we can begin to envision new possibilities and remove ourselves, ever so slightly, from the traumas of the past, even if it's done in bad taste.

Perhaps the realization that the Holocaust might be transitioning to becoming purely historical is what shocked us most of all about Larry David's monologue.  Perhaps then, for a new generation, such humor is no longer "too soon."

What do you think, Mrs. Lincoln?
Report from Uganda

Our TBE Millennials have fanned across the globe doing incredible acts of World Repair.
Exhibit A - this correspondence from Melissa Miles:

Hi Rabbi Hammerman,
Hope all is well! My mom told me she forwarded you the gofundme page I've started and I wanted to share some more background info!
I've been volunteering in Kampala, Uganda for the past month (and I will be here until December) at Community Microfinance, an organization that lends money to those who are otherwise excluded from the financial services sector. Their clients are mainly women entrepreneurs engaged in all types of business, agriculture, and community leadership roles. With the help of these loans, many have been able to lift their families out of poverty and serve as strong role models. One especially inspirational client for me is a woman named Lilian who quit her job as a teacher to start a school for children in her village. These children were not previously attending any school due to a lack of their family's ability to pay the associated fees. I would love for those interested to read more about Lilian and the project on the fundraiser page: https://www.gofundme.com/school-for-vulnerable-children
Let me know if you have any questions and thank you so much for helping to spread the word!
Best,
Melissa
Melissa - we could not be more proud of you!

I encourage everyone to read about Lilian, her courage, persistence and love. Click here to donate to Melissa’s project.
Shabbat Shalom
Rabbi Joshua Hammerman
Posted by Joshua Hammerman