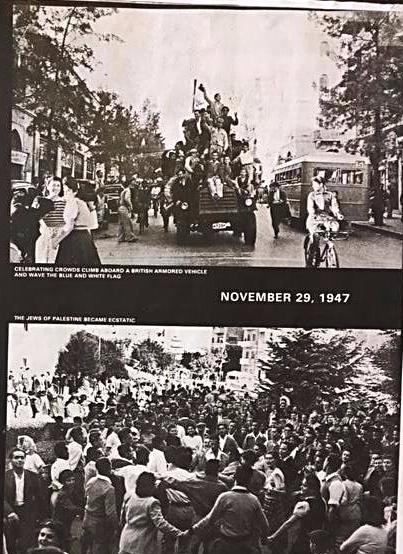 Shabbat morning brings another B'nai Mitzvah Club Shabbat, along with Shababimbam for younger set.  We'll also have babysitting on Friday night.  Just before Thanksgiving, Emily Goodman became the final student from this past year's graduating Hebrew School class to become Bar/Bat Mitzvah. Here's her d'var Torah.  To honor this superb group off young leaders, during the service I read excerpts from each of their B'nai Mitzvah speeches.  You can find those excerpts here.  Mazal tov once again to the class, and we look forward to seeing them here often in the future, including a number who will be helping us out at our Hanukkah dinner (and after party) in a couple of weeks.

Our TBE weekend also features Comedy Night on Saturday evening and Cynthia Blumenthal's registration-only appearance on Sunday at our Sisterhood Paid Up Membership event.  And December is just heating up! Next week, for instance, I'll be conducting a "Home and Home" December Dialogue with Rev Mark Lingle on how our different faith traditions view the Messiah.  See the flyer at the bottom of this email for more info.  And after that, Hanukkah, and our Disney-themed service and Shabbat dinner.  Lots to look forward to.

And don't forget that our registration deadline for next summer's Israel Adventure is just two weeks away!! Check out the details and reserve your spot here.   See below another of our series of great moments TBE Israel trips... our March of the Living group from 2010: 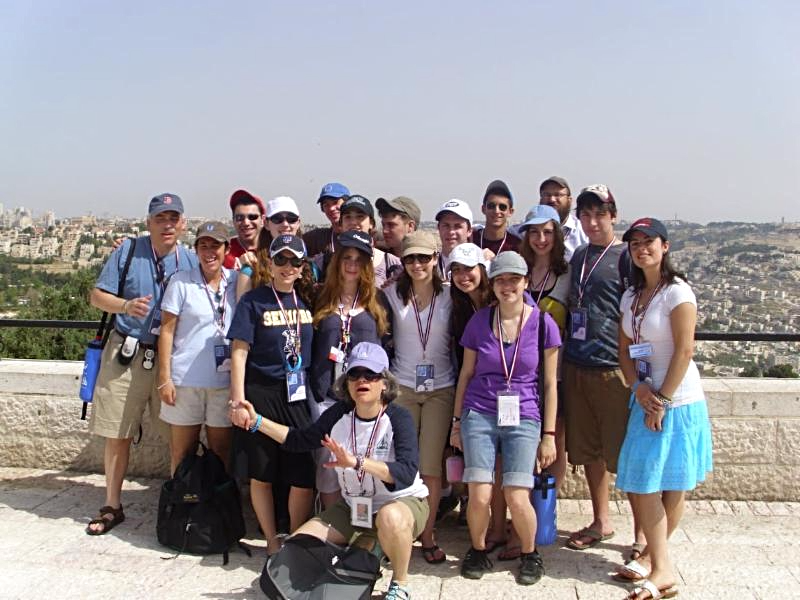 A People or a Faith?

This week, our year-long focus turns to a particular challenge facing the Jewish State, and that is to be truly a state for Jews of differing beliefs and practices.  Our first "IEngage" class focused on how there are two types of Judaism that must remain in balance, the Judaism of Belonging, stating that one is Jewish, a part of the Jewish people, simply by virtue of birth or conversion - the biggest tent of all, and the Judaism of Becoming, a Judaism of beliefs and practices, a Judaism of religion, that places different demands on those of different denominations.  Israel needs to be the place where all Jews can feel that they belong.  The big question is, are Jews a people or a religion?  Are we Jewish Americans or American Jews?  It's a complicated question and I can't hope to do justice to it - there is still time to join the class (register here) as we've only had one session (and about 40 have signed up already).
Tonight, we'll explore the topic in greater depth, tonight with the free screening of the acclaimed film, "The Women's Balcony," a comedy that poses serious questions about Judaism, Israel, religious authority and - a most timely topic - the abuse of women.
And tomorrow, we'll hear from a man that I consider to be one of the two foremost advocates for pluralism and religious freedom in Israel, Rabbi Uri Regev(Anat Hoffman is the other).  He's a great speaker as well.  He'll speak at the end of our 7:30 Kabbalat Shabbat service, led by myself and Katie Kaplan, who is sitting in for the cantor this week as she will be presenting at the USCJ Convention in Atlanta.  The title of Regev's talk is, Kotel, Conversion and Rabbinic Blacklists: What are the effects of the latest conflicts on Israel/Diaspora relations?" 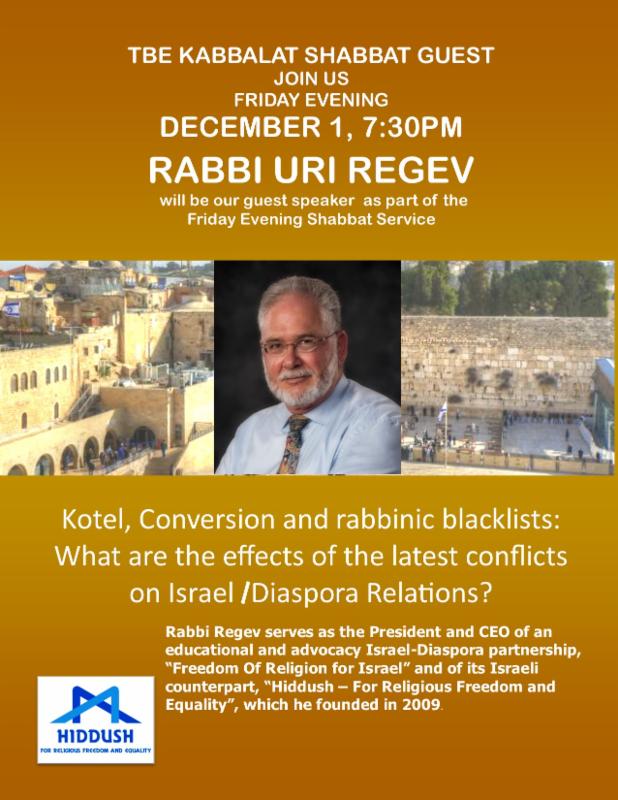 Rabbinical Assembly Statement on Sexual Misconduct
Given the flood of disturbing revelations of abuse by well known figures in entertainment, the media and politics, the Rabbinical Assembly has issued this statement, shedding light on how Jewish values might inform this national conversation.  Incidentally, this week's portion of Vayishlach features the abduction and rape of Dinah, Jacob's only daughter, and subsequent revenge of his sons on those who did it, including those who stood by and allowed it to happen. For a solid, timely and in-depth look at this crucial incident and how the (nearly exclusively male) commentators interpreted it over the centuries, see Dr. Alison Joseph's fascinating article, "Who is the Victim in the Dinah Story?"
The R.A. Statement:
"In the wake of ongoing revelations of alleged sexual misconduct, including the willingness of more and more women, and sometimes men, to tell their stories publicly, the Conservative Jewish movement condemns the behavior of those who use their positions of power to take advantage of others. We must be better attuned to these incidents, develop procedures and policies to prevent them, and condemn and when appropriate prosecute the perpetrators.
Jewish tradition prohibits physical or sexual abuse and teaches that kvod habriyot, the dignity of each person, is to be honored and maintained, and that ona'at d'varim, verbal, and by extension other nonphysical abuse, is strictly forbidden, and cannot be tolerated at any level.
We must work to ensure that our Jewish organizations and also our society at large emphasize standards of propriety and respect, and that we have in place policies and structures where those abused or harassed can safely report incidents and know their concerns will be taken seriously. We agree with the Child Safety Pledge, signed by top philanthropists in the Jewish world who have committed to support only those schools, camps and other institutions that work with children to take steps to 'prevent, report and investigate sexual abuse of minors.' Let us ensure that our Jewish institutions meet their criteria."
Neil Gillman z'l 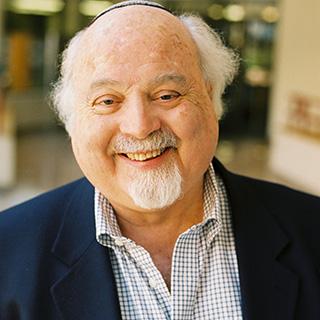 The Jewish world suffered a major loss this past week with the death of Neil Gillman.  Rabbi Gillman, the author of many books, was Conservative Judaism's foremost theologian of the post-Heschel era.  He appeared here at Beth El several times, most notably as a scholar in residence in the mid '90s and a teacher of a series of seminars on Jewish thought in 2010.
A highlight of that earlier scholar in residence weekend happened on Sat night.  For many years, those Sat. night / Havdalah programs were held at the home of Milton and Norma Mann.  They were gracious hosts and their house was the perfect setting for informal, deep and probing conversation.  On that memorable evening, Pref. Gillman led a faith development seminar in which he asked each of us to describe what God is to us - what metaphors would we use to describe God's role in our lives.  The metaphors that emerged were astonishing.  A fertility specialist spoke of encountering God when witnessing a new life that she has created in a petri dish.  I recall that I described God as a large screen TV (I was definitely shopping for one at the time), with each human being as a single, transient dot on that screen.  We never get to see the big picture, but we know that somehow, we are part of a greater order, that all of us are connected, and that the script calls for a divinely-ordained conclusion of some sort.  God also operates the remote control and could change the channel at any moment, especially if our dots separate or weaken and the picture becomes snowy.
In his 2010 seminar, Gillman also got us thinking imaginatively about a range of Jewish topics.  At one point, he had us open the prayer books of several denominations and discuss how we all deal with similar questions in very different ways.  He was supremely open and honest and craved questions and independent thought.
On a personal level, he was a caring teacher, colleague and friend.  Neil was Dean of the Rabbinical School of JTS when I entered, and in fact, he was the one who encouraged me to pursue my candidacy when I came to interview.  He was a constant source of support throughout my time at JTS and beyond.  Here is what he wrote in 2000 as a blurb for the cover of my book, "thelordismyshepherd.com: Seeking God in Cyberspace:
"In this engaging, imaginative, and beautifully crafted essay, Rabbi Hammerman challenges the conventional assumptions that the new technology is inherently dehumanizing and desacralizing.  Instead, he traces the impact of his personal adventures in cyberspace, and demonstrates how they have provided him with a new sense of community and connectedness, of intimacy, and of spiritual and religious insight.  The notion that the Web can serve as a powerful new metaphor for God's presence in the world is not the least of the teachings suggested by this compelling and subversive book."
No doubt that book on seeing God within new technologies had its origin, in part at least, on that Saturday evening at the Manns'.
Rabbi Gillman was a little subversive in his own right, and he often challenged his more cautious colleagues on the JTS faculty.  When I was there, his courage was shown more than once during the contentious debate over the ordination of women.
Although he retired from the faculty several years ago, I occasionally saw him around, both live and in print. Once when he stayed at my home as our scholar in residence, he looked into the eyes of our baby and whispered, in a very soft, spiritual  tone, "What a wonder! What a miracle!"   Abraham Joshua Heschel could not have had a more fitting successor on the JTS faculty.
Posted by Joshua Hammerman