The Shabbat-O-Gram is sponsored by Michelle and Greg Marrinan in honor of their daughter, Julia,
becoming a Bat Mitzvah.

Cartoon from the The New Yorker 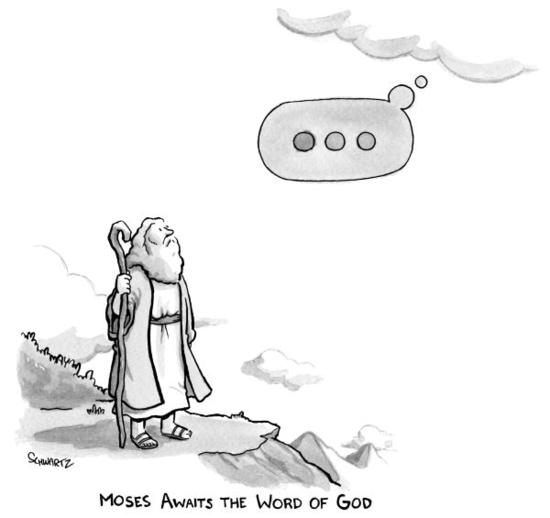 Well, he'll need to wait an extra hour this Sunday!

Rabbi Tarfon would say: The day is short, the work is much, the workers are lazy, the reward is great, and the Master is pressing. He would also say: It is not incumbent upon you to finish the task, but neither are you free to absolve yourself from it.

In other words,
Don't forget to turn back your clocks!!!

Mazal tov to Julia Marrinan, who becomes bat mitzvah this Shabbat morning, and of course, join us this Friday night as well.  As we move into November, our programming focus turns to Israel, but at the same time, the kickoff of our Campaign for Beth El on November 15 at 7 PM.  Join us that night to hear all about our exciting plans.  There will be no solicitations.

Because we can all use a laugh...
In honor of this week's portion, here are...

...The Top Ten Songs from the Portion of Vayera
(read more about Vayera here)