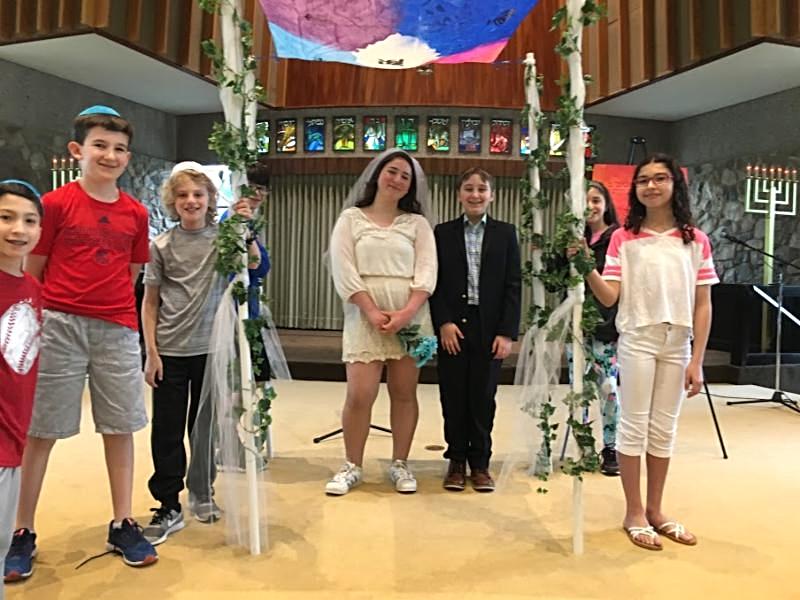 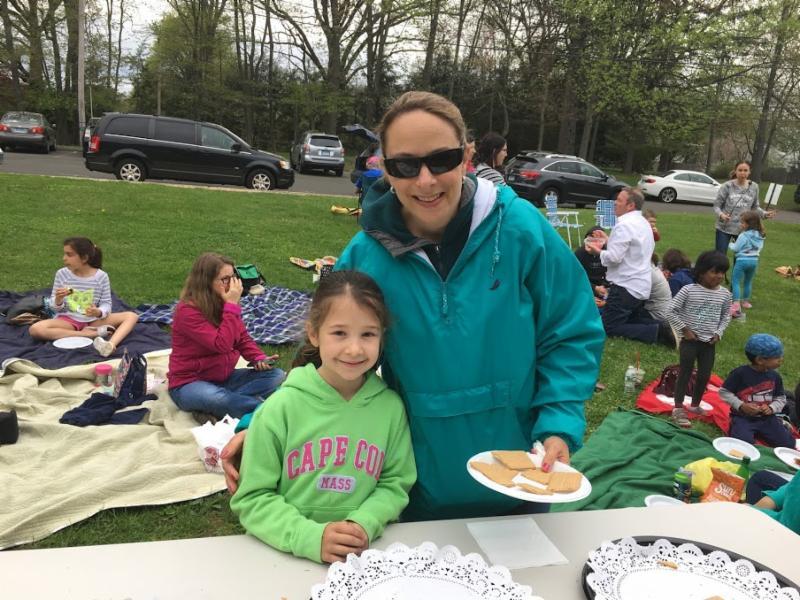 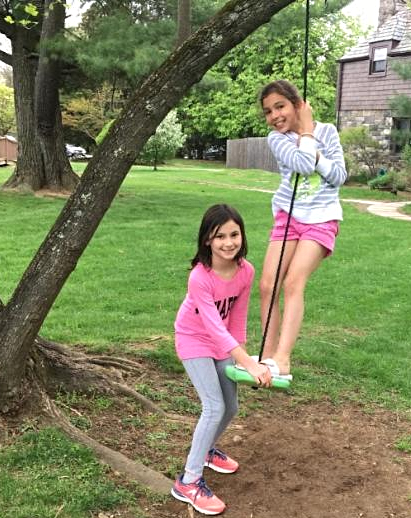 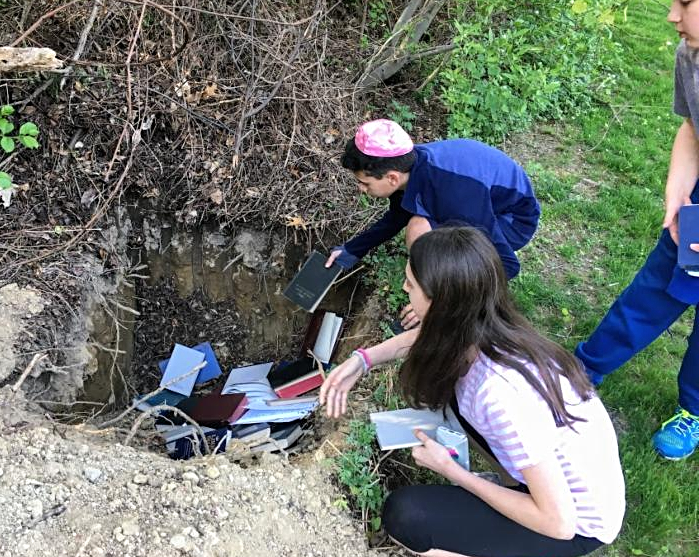 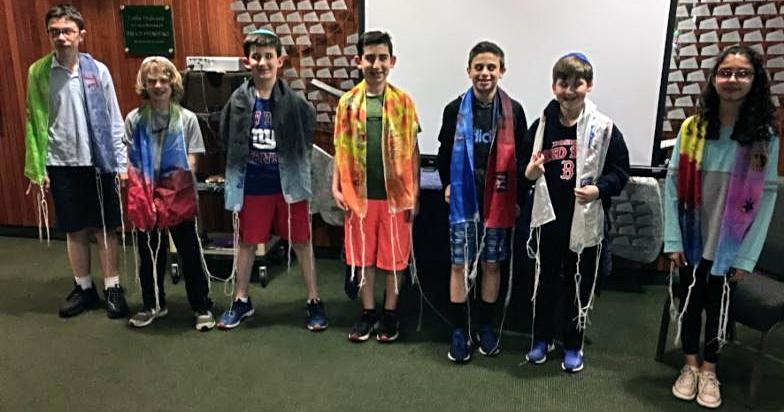 Scenes from our Religious School Mock Wedding and Lag B'Omer Family Fire Festival, both held last Sunday, and 7th graders burying sacred books at Beth El Cemetery yesterday, as part of their life cycle curriculum.  On bottom, our 6th graders unveiled their own hand-made tallises (tallitot), as they begin preparing for bar/bat mitzvah.  If you look closely, you'll see Red Sox and Yankee themed tallises, side by side!

See more photos by going to our Spring photo album and scrolling down.

This week is our annual Sisterhood Shabbat, and I look forward to sitting back and enjoying the service that our sisterhood members have prepared, and lunch a la mens' club.

In other congregant news, mazal tov to Sheryl Young who this coming week will receive the Hoffman award from the JCC, and to Joy Katz, who will become the JCC's new president.  Mazal tov once again to last week's bat mitzvah, Nora Amsellem, whose dvar Torah can be seen here. Also, mazal tov to Linda Simon - her story is online, along with those from dozens of women writing about cooking with their moms. Perfect for Mothers Day.  See it at EatDarlingEat.net.  After you've read Linda's excellent piece, peruse around the site - perfect for this weekend.  And for some Jewish background, see my piece, What's So Jewish About Mother's Day?
This weekend is also Fair Trade Shabbat.  See the discussion packet on Judaism and Fair Trade that I prepared for last Shabbat morning's service.  Read more about World Fair Trade Day and Fair Trade Shabbat. 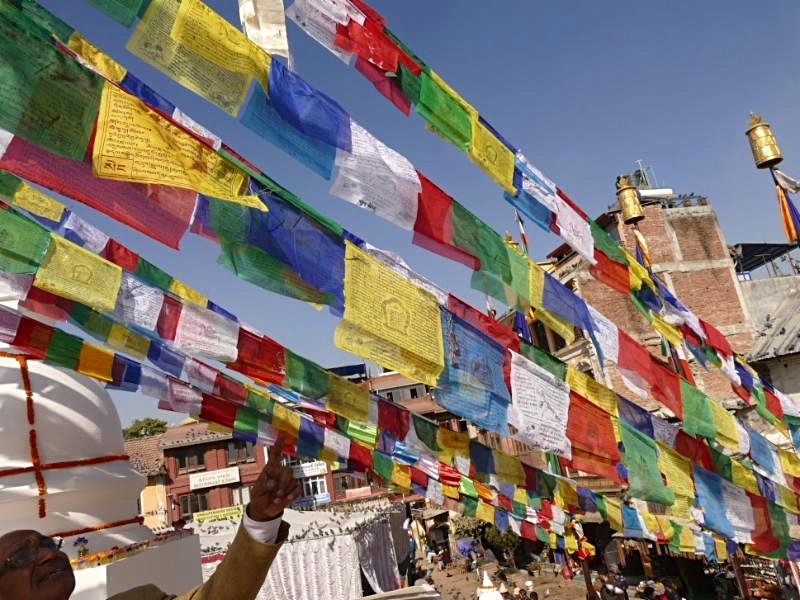 Last winter when I traveled to Nepal, it was impossible not to notice Tibetan prayer flags flying everywhere, carrying their message of compassion, joy, long life, and prosperity.  Imagine writing a note at the Western Wall, but instead of placing it into a crevice, letting it fly freely in the wind.  That's what these personally-inscribed flags are like.

In the Tibetan tradition, prayers are carried on the wind. The Hebrew word for "wind" is "ruach", which is also translated as "spirit" or "breath," as if the blessings of our spirit are carried in the wind.  There is so much that we share.


The colors and imagery of the Blessing Flags are based on ancient Jewish tradition (Exodus 28:1-8, 33-34). The High Priest's garments were primarily blue, purple, and scarlet, and the tunic hem was adorned with embroidered bells and pomegranates. The hamsa (hand image) is a symbol of blessing and protection in many Near and Middle Eastern traditions, including Judaism. Also known as the "Hand of Miriam", it is often used for protection in amulets and other ritual items. Five (hamesh in Hebrew) represents the five books of the Torah.

The blessing flags were produced by Mahaguthi, a fair trade organization in Nepal, according to fair trade standards, which reflect Jewish values of economic justice, fair treatment of workers, environmental sustainability, and consumer responsibility.

These flags will eventually fly in our sukkah, but in honor of Fair Trade Shabbat, on Friday night they'll be on display in the lobby, to enrich our prayer experience, and to inspire is all to live lives of simplicity and goodness.

Sunday is Jerusalem Day and next week, at long last, the American embassy in Israel will officially be moved to Israel's capital of Jerusalem.  Next week also marks the secular anniversary of Israel's independence, a date that is mourned by Palestinians as the "Nakba," - disaster.  One might argue that it's time for the Palestinians to "get over it," in which case I suggest that we stop commemorating Pearl Harbor Day and Tisha B'Av.  There are plenty of good reasons to commemorate catastrophes, not the least of which is that it can lead to positive soul searching on all sides.  It's hard to soul-search, though, when some parties are determined to stir things up, which is precisely what Hamas is planning to do on the Gaza border next week - and, sadly, it's what will be happening in Jerusalem too.

Jerusalem Day, which commemorates that wondrous moment in 1967 when the Jewish people returned to our most sacred precinct, has already been abducted by those wishing to demonstrate an "in-your-face" slap at those who were vanquished.  I led a TBE group to Israel for Jerusalem Day way back in 1991, where we attended the opening ceremony for the Western Wall Tunnels.  That excavation is remarkable (and our group will go there next month), and in no way does it infringe on any Muslim or Christian holy site.  Minority religions remain free to worship as they wish in the Holy City (unless they happen to be Conservative or Reform Jews at the Kotel). But Jerusalem Day also includes an annual in-your-face parade of Jews through the Old City that has become needlessly provocative.  Because of Ramadan, last year's marchers were limited in the time they could spend taunting residents of the Muslim quarter.  Lets hope cooler heads prevail again next week.

So the question we must ask is whether the dedication of the new American Embassy adds more to Israel's sense of security or to this atmosphere of provocation, at precisely the time when things are most volatile. 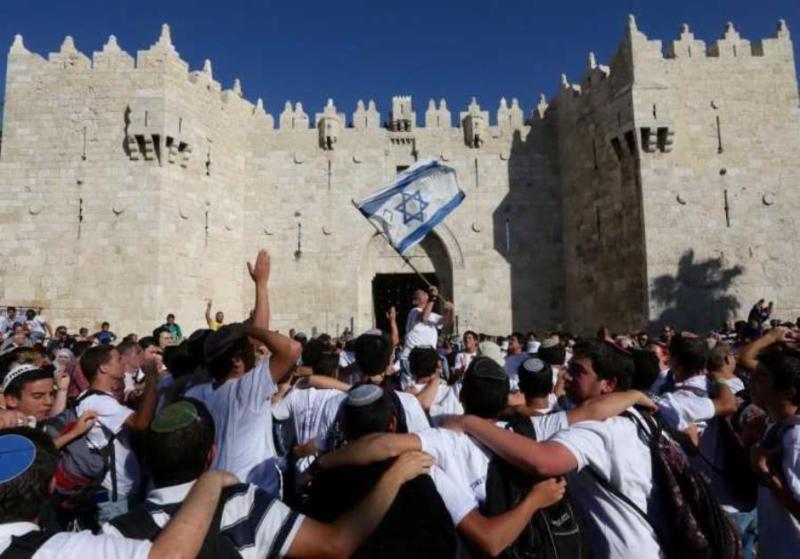 During these weeks when we are looking back at my 30+ years of service here, it's timely to look at an op-ed I wrote for the Stamford Advocate in 1994 (see the article below), calling on Washington to recognize Jerusalem as Israel's capital.  As I stated then, even though the Jerusalem's final borders would be determined by an Oslo process still in its infancy, Jerusalem's status as Israel's capital was non-negotiable.  I suggested that the time was right for President Clinton, who was about to visit the region, to give Prime Minister Rabin a "peace dividend" that would isolate extremist elements among the Palestinians and diminish growing resistance to the peace process among Rabin's Israeli opponents.

Imagine how history could have been changed had President Clinton taken that bold step to reward a friend - and remember, Israel had only recently "taken one for the team," in absorbing 39 Iraqi Scud missile during the Gulf War.  Perhaps this vote of confidence would have weakened the hand of Rabin's critics and boosted the morale of those willing to take large risks for peace. "America no longer needs to be an even handed broker," I said back in 1994, adding that a gesture of support toward an Israel bent on peace would send just the right signal to the Arab world.

Unfortunately, President Clinton did not choose that bold path in 1994, and the Oslo process begin to break down almost immediately after that.  Would things have been different?  Would the forces that led to Rabin's assassination the following year have been quelled?  Would Arafat have been chastened by such a strong show of support for Israel by the Americans?  We will never know.

As I wrote last December, the decision to move the embassy to Jerusalem remains the correct one, but the timing remains wrong for a variety of reasons.  Those reasons have not changed, and in fact, they have become more pronounced.  Israel's need to assert itself to protect its northern border is a priority right now, as is the search for ways, ideally diplomatic, to diffuse the tinderbox in the south.  With instability increasing along Israel's borders (and whatever you think of the decision to back out of the Iran deal, it has created more instability, at least in the short term) we can only hope that some day soon, the promise of Jerusalem, as a city of peace and reconciliation, will be fulfilled.

Next week's embassy photo-op  - it is hardly the "peace dividend" so richly deserved in 1994 - will do nothing to help us get there, especially when it will be displayed in concert with images of misguided celebrants, kicking sand in the faces of people who have called the place home for many generations.

In my mind I keep returning to the amazing concert I attended at the Jerusalem YMCA last Christmas Eve, where Israeli and Palestinian children together sang, in perfect harmony, "I'm gonna make this place my home."

Jerusalem is ours - and it should be.  But for everyone, it is home.

Video I took of the Jerusalem Youth Chorus singing "Home"

To honor Jerusalem Day, see a packet of historical maps and information on Jerusalem that I prepared for our Israel Adventure group, which departs June 24.

Click here for a pdf version of the article below 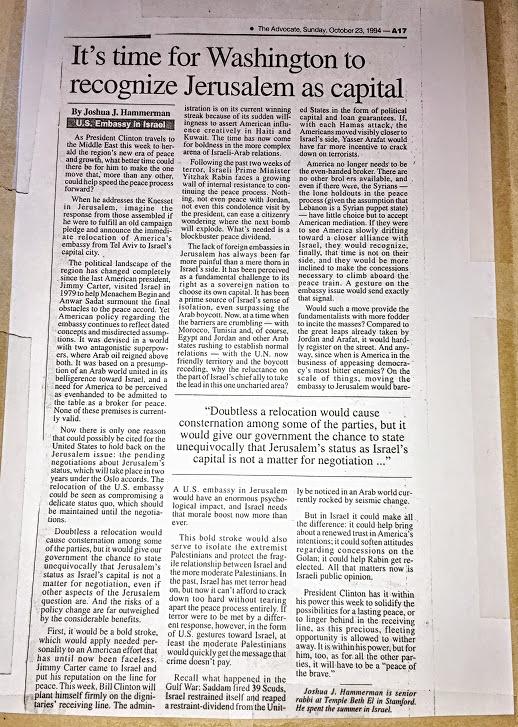