This Shabbat-O-Gram is sponsored by Marni Amsellem and David Amsellem, in honor of Nora's becoming Bat Mitzvah this Shabbat. 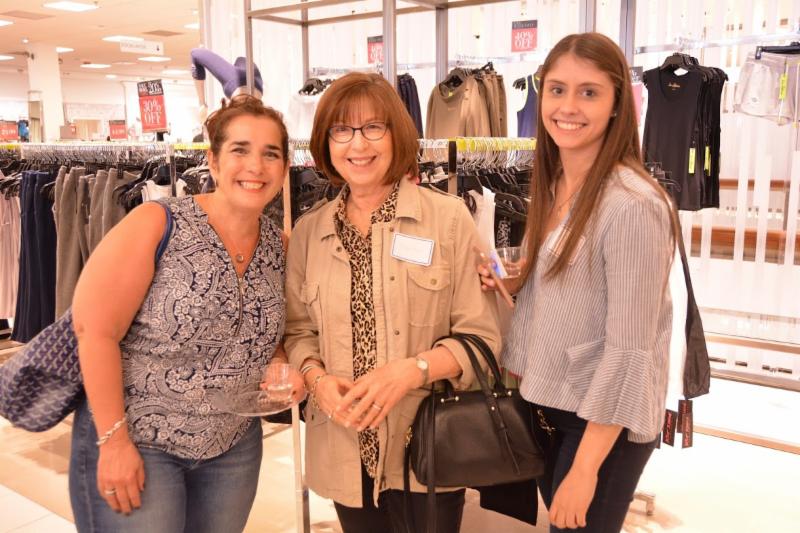 From last week's Sisterhood Fashion Show. Click here for the all the photos.
Thank you to Stephanie Zelazny for the photography

Mazal tov to Nora Amsellem, who becomes Bat Mitzvah this Shabbat morning.  Join us Friday night as well - and don't forget our Lag B'Omer Fire Festival this Sunday, along with our Men's Club Blood Drive.

The Band's Visit
This week, "The Band's Visit" received multiple Tony nominations and is seen as a favorite in several categories.  Last night, approximately 50 from TBE went to see it, as part of our new "Broadway Club," led by Cantor Fishman.  A great time was had by all. 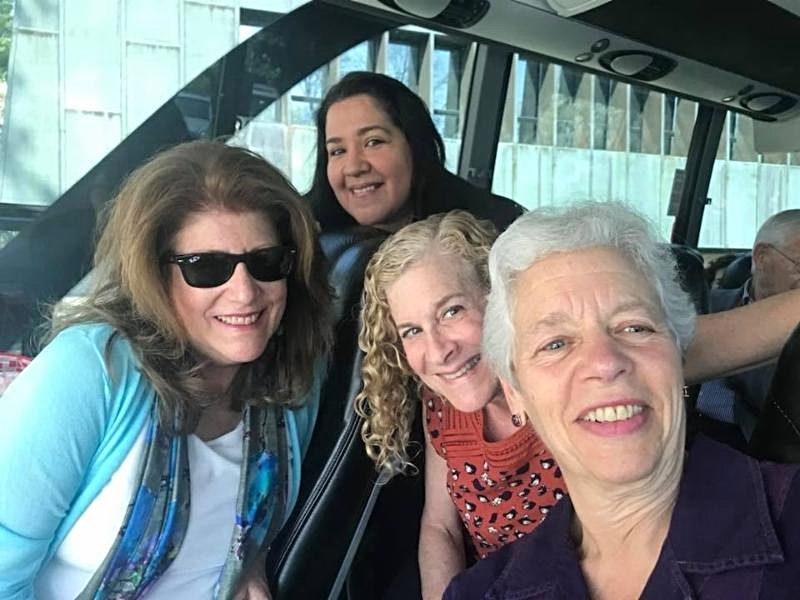 See more photos from last night in our Spring Album - scroll down to the end.


Donna Wolff commented, "I loved this show! So poignant, sweet and heartwarming. Nice to see Arabs and Israelis be kind and human to each other. This how to welcome the stranger. Hope they win some Tony Awards."

Heidi Ganz, who helped to coordinate the event, called it "magical, entertaining, and beautiful!"  But even more than the show itself, "what everyone  was raving about was the warm feeling of togetherness!"   Cantor Fishman concurred, stating that what she loved even more than the show itself was "to look on the bus and restaurant and see people talking to each other."

Ironically, that is precisely what the show is about too.
I saw "The Band's Visit" last fall, right as it opened - and already was a big fan of the 2007 film on which the musical is based. But the addition of music makes the Broadway version even better.   It's the story of an Egyptian police band that gets sidetracked to a dead-end Israeli development town in the 1990s.  The acting is superb, the music spirited, the theme universal and the ambiance authentically Israeli.

The overarching message is of overcoming difficulties in communication and developing authentic relationships. The premise of the show is a mix-up at the border that sends the band to Bet Hatikva, instead of Petach Tikva, "with a P."  English is the common ground where the Israelis and Egyptians meet, but it's also slippery ground for all of them, and the words never flow easily.  Audience members get to feel that first hand, as some of the dialogue is in Hebrew and Arabic, and goes untranslated.  BTW, understanding Hebrew - and Israeli culture - adds a whole new dimension to the experience of this play, and I assume that is the case with Arabic too.

In some ways, though, the communication issues are more acute among couples and families that have known each other for years in the town, who, in a literal sense, speak the same language, but really don't.   It's nice to see a show about Arabs and Israelis where not a word is spoken about territories, terrorism or anything remotely political.

In the end, the languages that are truly universal are the ones that matter here the most: music and love.

The expression means "backtrack," and we saw a number of examples of it this week, even a few that did not involve a certain former mayor of New York.

There was Mohammad Abbas, retracting one of the most blatantly anti-Semitic speeches ever given by a world leader.  There was Paul Ryan, reinstating the House Chaplain who had been unceremoniously dumped, for what appear to have been all the wrong reasons.  That one hit home for me.  Boy, people say synagogue politics can be brutal, but imagine having as your bosses 435 people serving in the most hyper-political, dysfunctional place around.  Kudos for Father Patrick J. Conroy for standing his ground and not allowing innuendo to trample upon his hard-earned reputation.

I hate it when my GPS inadvertently circles me back past my point of departure, but sometimes, once you've reached the destination, you realize that you were far better off at Square One. (Is it a mixed metaphor to use squares and circles in the same sentence?)  It's axiomatic that sometimes the best decisions are the ones never actualized.  But the corollary to that is true too.  Sometimes the best decision is the one where you walk back your prior decision.

Jews have another word for backtracking - it's called Teshuvah, and it's not just meant to happen around the High Holidays.  In fact, the High Holidays are discussed in this week's Torah portion of Emor, and we are half a year away!

It's the Torah's way of reminding us that it is never too late - or too soon - to back off false statements and come clean.  In order to move forward, it's perfectly fine to backtrack - as long as the goal is to, at long last, get it right.

Here's another in my series of personal favorites from yesteryear, as we all celebrate 30 years together.  This article was written in 2010, just before I want to Poland for the first time.  One particular stop in our itinerary made me reflect on matters both ridiculous and sublime: 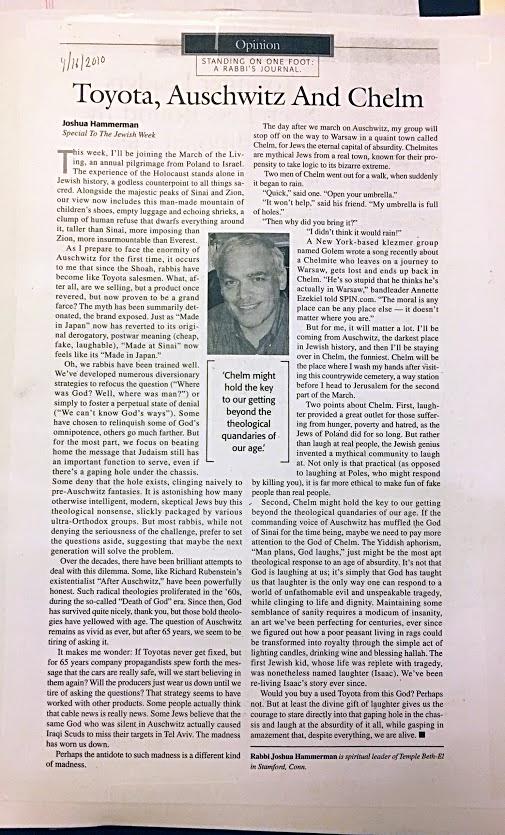 This week, I'll be joining the March of the Living, an annual pilgrimage from Poland to Israel. The experience of the Holocaust stands alone in Jewish history, a godless counterpoint to all things sacred. Alongside the majestic peaks of Sinai and Zion, our view now includes this man-made mountain of children's shoes, empty luggage and echoing shrieks, a clump of human refuse that dwarfs everything around it, taller than Sinai, more imposing than Zion, more insurmountable than Everest.
As I prepare to face the enormity of Auschwitz for the first time, it occurs to me that since the Shoah, rabbis have become like Toyota salesmen. What, after all, are we selling, but a product once revered, but now proven to be a grand farce? The myth has been summarily detonated, the brand exposed. Just as "Made in Japan" now has reverted to its original derogatory, postwar meaning (cheap, fake, laughable), "Made at Sinai" now feels like its"Made in Japan."
Oh, we rabbis have been trained well. We've developed numerous diversionary strategies to refocus the question("Where was God? Well, where was man?") or simply to foster a perpetual state of denial ("We can't know God's ways"). Some have chosen to relinquish some of God's omnipotence, others go much farther. But for the most part, we focus on beating home the message that Judaism still has an important function to serve, even if there's a gaping hole under the chassis. Some deny that the hole exists, clinging naively to pre-Auschwitz fantasies. It is astonishing how many otherwise intelligent, modern, skeptical Jews buy this theological nonsense, slickly packaged by various ultra-Orthodox groups. But most rabbis, while not denying the seriousness of the challenge, prefer to set the questions aside, suggesting that maybe the next generation will solve the problem.
Over the decades, there have been brilliant attempts to deal with this dilemma. Some, like Richard Rubenstein's existentialist "After Auschwitz," have been powerfully honest. Such radical theologies proliferated in the '60s, during the so-called "Death of God" era. Since then, God has survived quite nicely, thank you, but those bold theologies have yellowed with age. The question of Auschwitz remains as vivid as ever, but after 65 years, we seem to be tiring of asking it.

It makes me wonder: If Toyotas never get fixed, but for 65 years company propagandists spew forth the message that the cars are really safe, will we start believing in them again? Will the producers just wear us down until we tire of asking the questions? That strategy seems to have worked with other products. Some people actually think that cable news is really news. Some Jews believe that the same God who was silent in Auschwitz actually caused Iraqi Scuds to miss their targets in Tel Aviv. The madness has worn us down.
Perhaps the antidote to such madness is a different kind of madness.
The day after we march on Auschwitz, my group will stop off on the way to Warsaw in a quaint town called Chelm, for Jews the eternal capital of absurdity. Chelmites are mythical Jews from a real town, known for their propensity to take logic to its bizarre extreme.
Two men of Chelm went out for a walk, when suddenly it began to rain.
"Quick," said one. "Open your umbrella."
"It won't help," said his friend. "My umbrella is full of holes."
"Then why did you bring it?"
"I didn't think it would rain!"
A New York-based klezmer group named Golem wrote a song recently about a Chelmite who leaves on a journey to Warsaw, gets lost and ends up back in Chelm. "He's so stupid that he thinks he's actually in Warsaw," bandleader Annette Ezekiel told SPIN.com. "The moral is any place can be any place else - it doesn't matter where you are."
But for me, it will matter a lot. I'll be coming from Auschwitz, the darkest place in Jewish history, and then I'll be staying over in Chelm, the funniest. Chelm will be the place where I wash my hands after visiting this countrywide cemetery, a way station before I head to Jerusalem for the second part of the March.
Two points about Chelm. First, laughter provided a great outlet for those suffering from hunger, poverty and hatred, as the Jews of Poland did for so long. But rather than laugh at real people, the Jewish genius invented a mythical community to laugh at. Not only is that practical (as opposed to laughing at Poles, who might respond by killing you), it is far more ethical to make fun of fake people than real people.
Second, Chelm might hold the key to our getting beyond the theological quandaries of our age. If the commanding voice of Auschwitz has muffled the God of Sinai for the time being, maybe we need to pay more attention to the God of Chelm. The Yiddish aphorism, "Man plans, God laughs," just might be the most apt theological response to an age of absurdity. It's not that God is laughing at us; it's simply that God has taught us that laughter is the only way one can respond to a world of unfathomable evil and unspeakable tragedy, while clinging to life and dignity. Maintaining some semblance of sanity requires a modicum of insanity, an art we've been perfecting for centuries, ever since we figured out how a poor peasant living in rags could be transformed into royalty through the simple act of lighting candles, drinking wine and blessing hallah. The first Jewish kid, whose life was replete with tragedy, was nonetheless named laughter (Isaac). We've been re-living Isaac's story ever since.
Would you buy a used Toyota from this God? Perhaps not. But at least the divine gift of laughter gives us the courage to stare directly into that gaping hole in the chassis and laugh at the absurdity of it all, while gasping in amazement that, despite everything, we are alive.