Here's the video montage of my first 30 years at TBE, shown at this week's Annual Meeting.
Thank you especially to Stephanie Zelazny for putting this together.  #grateful/blessed 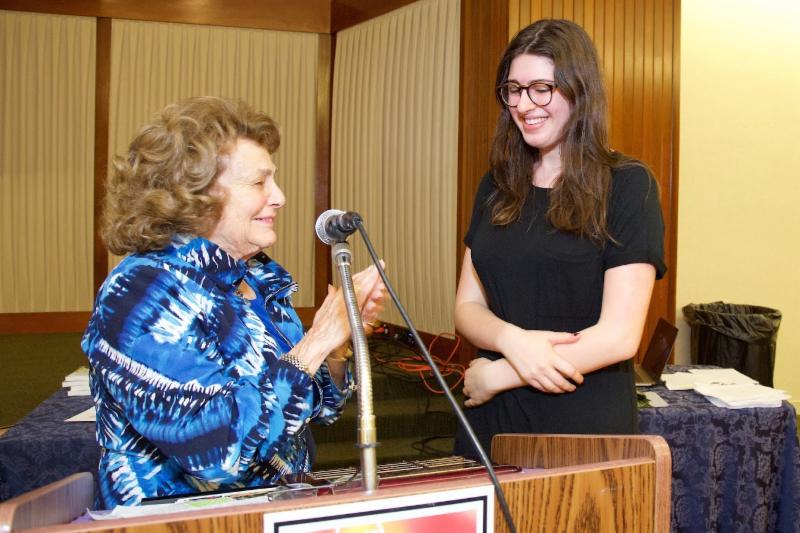 Joan Weisman presenting the Fred Weisman award to Alyssa Goldberg at the annual meeting.  See our End of Year Album, which includes photos from the meeting, including award winners and graduates. Thank you to Aviva Maller Photography for the annual meeting and 7th grade class photos. 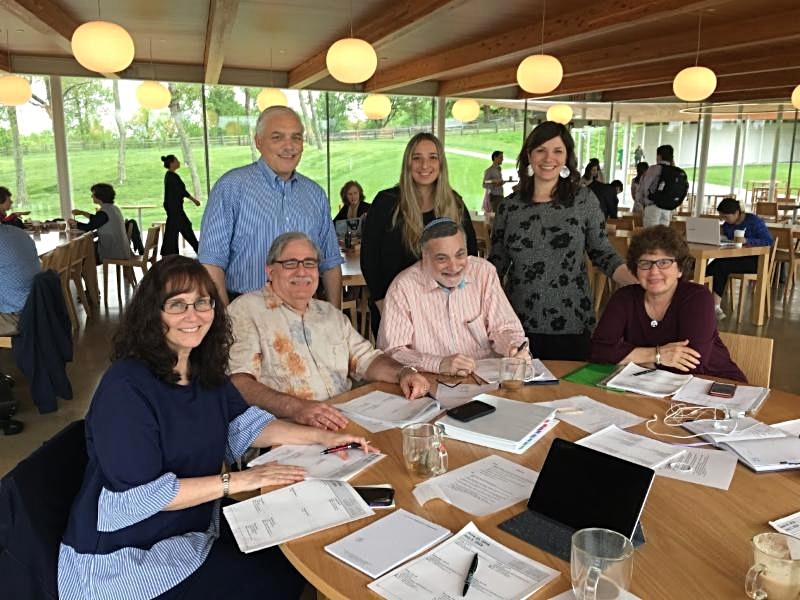 And never ones to rest on our laurels, our senior staff and lay leadership had a mini-retreat at Grace Farms this week to begin planning for 2018-2019

The "official beginning of summer" always sneaks up on us, never more than this year, with volatile temperatures and dizzying news cycles distracting us.  But here we are.  If you are i town this weekend, stop by to slow down the pace of life a bit, at services this evening and Shabbat morning as well - along with Sunday and Monday at 9 AM.

Memorial Day, meanwhile was originally a day to remember war dead ("Memorial" Day...get it?), before it became an occasion for car sales, beach trips and barbecues.  Maybe this year we can regain some of the deeper meaning of this special weekend.  I hope that each of us will take a moment to recall those who have made the supreme sacrifice. As I have in prior years on Memorial Day weekend, I share with you the words of Rabbi Roland Gittlesohn  in a speech delivered at the dedication of the 5th marine Cemetery on Iwo Jima, in March 1945. It has been called one of the great battlefield sermons to come out of World War Two.

Here lie men who loved America because their ancestors generations ago helped in her founding, and other men who loved her with equal passion because they themselves or their own fathers escaped from oppression to her blessed shores. Here lie officers and men, Negroes and whites, rich men and poor . . . together. Here are Protestants, Catholics, and Jews together. Here no man prefers another because of his faith or despises him because of his color. Here there are no quotas of how many from each group are admitted or allowed. Among these men, there is no discrimination. No prejudices. No hatred. Theirs is the highest and purest democracy ...
Whosoever of us lifts his hand in hate against a brother, or who thinks himself superior to those who happen to be in the minority, makes of this ceremony and the bloody sacrifice it commemorates, an empty, hollow mockery. To this, then, as our solemn duty, sacred duty do we the living now dedicate ourselves: to the right of Protestants, Catholics, and Jews, of white men and Negroes alike, to enjoy the democracy for which all of them have here paid the price ...
We here solemnly swear that this shall not be in vain. Out of this and from the suffering and sorrow of those who mourn this will come, we promise, the birth of a new freedom for the sons of men everywhere.

Many years ago, the American Jewish activist Leonard Fein wrote that there are two kinds of Jews in the world:

There is the kind of Jew who detests war and violence, who believes that fighting is not the Jewish Way.

And then there is the kind of Jew who is convinced that we have been passive long enough, who is convinced that it is time to strike back at our enemies, to reject once and for all the role of victim, who will willingly accept that Jews cannot afford to depend on favors, that we must be tough and strong.

And the trouble is, Fein added, that most Jews are both kinds of Jew.

As I came of age, I felt that tug embodied most in the characters of Philip Roth and Leon Uris. The two books that were most formative of my polarized Jewish psyche were, hands down, "Exodus" and "Goodbye Columbus." I marveled at the pride of Ari Ben Canaan and his ability to stare down an anti-Semitic British officer who could "spot a Jew a mile away." At the same time, I felt the unease of Jews just finding themselves in America, feeling the tug of both maternal and Holocaust guilt while wallowing in passivity and helplessness.

Roth's work profoundly influenced me. It would probably have given him a perverse thrill to
know that his fiction had a lot to do with a young Jew's decision to become a rabbi. I would venture to guess that there is an entire generation of Rothian rabbis, which is a pretty big deal considering how he was so excoriated by the rabbinic establishment for his early works, including "Goodbye Columbus" and "Portnoy's Complaint."

While Ari Ben Canaan was who we wanted to be, Roth's characters represented who we were, or at least who we perceived ourselves to be. And in their own way, those characters were equally heroic.

Roth was able to call out the materialism and superficiality of postwar American Jewry. In his stories, the insecurity of Jews was a source of weakness and shame, but their marginality was also a source of strength. It was those characters who had not "made it," who never fit in, who could best point out the hypocrisy that was so rife in their communities.

My favorite story of the "Goodbye Columbus" collection, is the last one, "The Conversion of the Jews," featuring Ozzie, a Hebrew School student who rebelled against an abusive teacher, who ultimately realized a degree of power of over his tormentors when he ran to the roof and threatened to jump. I was a Hebrew School student myself when I first read it - actually, it was read to my bunk at bedtime at Camp Ramah. My counselors were fully immersed in the counter culture, and through them, Roth's work was weaponized as a means of attacking the Jewish establishment. Combined with the music of Bob Dylan and Simon and Garfunkel, and films like "The Graduate," Roth enabled us to fight a very different battle from the one being waged by our Ben Canaan cousins in Israel at that same time, but no less revolutionary.

I recently picked up a new collection of Roth's nonfiction essays, called "Why Write," the final work published in his lifetime.

I was taken by a speech called "New Jewish Stereotypes," originally delivered at a symposium in Chicago in 1961, at a time when the film version of "Exodus" had just been released, when Roth was enduring constant barbs from the Jewish establishment about "Goodbye Columbus."

Uris had criticized Roth indirectly in a New York Post interview, saying, "There's a whole school of American Jewish writers, who spend their time damning their fathers, hating their mothers, wringing their hands and wondering why they were born. This isn't art or literature. It's psychiatry.... I wrote "Exodus" because I was sick of apologizing. (I discovered that) we Jews are not what we have been portrayed to be. In truth, we have been fighters."

In this essay, Roth responds: "However you slice it, there does not seem to be any doubt that the image of the Jew as patriot, warrior, and battle-scarred belligerent is rather satisfying to a large segment of the American public."

He mocked the facile transition of the image of the Jew from victim to warrior, and noted that the new image was so off base that official version of the theme song for "Exodus" had to be sung not by Jewish singers Moshe Oysher or Eddie Fisher, but by the ultimate WASP, Pat Boone.

Roth suggests that "Exodus's" inflated popularity stems from the fact that both American Jews and Americans in general were desperate to change the subject following the Holocaust. "The Jew is no longer looking out from the wings of the unending violence of our age, nor is he any longer its favorite victim; now he is a participant."

He adds, "Mr. Uris's discovery that Jews are fighters fills him with pride; it fills any number of his Jewish readers with pride, and his Gentile readers less perhaps with pride than with relief."

Roth then compares Uris to a young author named Elie Wiesel, whose work "Dawn," a sequel to "Night" taking place in pre-state Palestine, depicts the true face of this new Jewish warrior, not the idealized Ari Ben Canaan, but one who has been profoundly wounded in Buchenwald and Auschwitz, who has seen and suffered so much.

Uris's depiction of fighter Jews is also an explicit rejection of the ghetto Jew so often mocked by early Zionists and, to a degree, still the stereotyped depiction of American Jews for modern day Israelis. When they look at the Diaspora, they are looking at it through Urisian disdain and Rothian ambivalence.

This might partially explain the Israeli right's infatuation with American evangelicals, who can be be compared to the "shiksa goddesses" of Roth's works. Meanwhile, the guest list at the recent American embassy relocation indicates that three quarters of American Jews were left at the altar while Prime Minister Netanyahu was pining for acceptance to the country club that would never have let Alexander Portnoy in.

The Roth-Uris battle still resonates, nearly six decades later. Who are we? The fighter or thekvetcher? The noble or the nebbish? The ideal or the real?

Or are we both types of Jew? Proud, but complicated. Or complicated, but proud of it.

We are Ari Ben Portnoy. So don't mess with us.

We make enough of a mess of things all by ourselves.