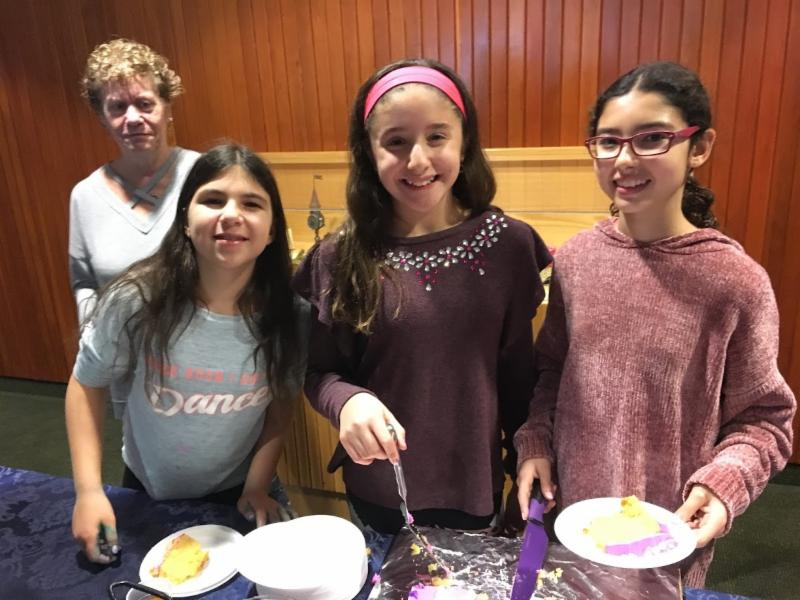 TBE Hebrew School and Day School 7th graders celebrated last Sunday at our mock bris and baby naming.  See more photos here.  And mazal tov to Jami and Scott Fener on the birth of a real baby boy this week!

Mazal Tov to Emily Sherman and her family, as she becomes Bat Mitzvah this Shabbat morning. Join us on Shabbat morning also for the visit of an interfaith group from the Afula region brought to our community by the UJF: guests are
Amani Masalha Zoabi, born in Daburiah, an Arab traditional village next to mount Tabor and now a resident of the  Israeli-Arab village of Tamra in the Gilboa Regional Council.
Amir Cahaner, a geographer specializing in the demographics of the Ultra-Orthodox;
Ayala Carmi, a therapist and Healthy & Balanced Life consultant, and
Ravid Pitaro, a physician and the head of this coexistence group.
On Friday evening, TBE congregant Ben Evans will be speaking of his personal experiences of Kristallnacht.
For those who have seen me this week and are wondering about the facial hair, no, I'm not trying to stir my inner Sean Connery (sorry, shaken, not stirred). I'm in the midst of shloshim, the 30-day intermediate period of mourning that both includes and follows shiva. If you are interested in learning more, I highly recommend this super informative article from MyJewishLearning, "Shloshim: The Bridge to a New Normal." While there is nothing pleasant about grieving, the process I'm going through does give me a chance to "teach 'em how to say goodbye," as I did last week when the Hebrew School paid a shiva call. During these 30 days, I will continue to grow the beard. Then, after visiting the facial hair capital of the world, Brooklyn, I'll shave it off (probably).
We still are trying to assimilate both the positives and negatives of the past few weeks. On the plus side, I want to share Kyle Nadel's bar mitzvah speech from two weeks ago.

And then there is the continued shock of the shooting at the Tree of Life synagogue (as well as last night's shooting in California). TBE transplant and new Pittsburgh resident Natasha Berman wrote to update me about how the community was coping. She wrote: