Shabbat-O-Gram for Oct. 4: High Holidays Sermons and Music, Tribes of Israel, Regression from the Meanness

Screen grab from the streaming video of our Rosh Hashanah services.
See more (and enlarge) photos in our summer-fall album

SPECIAL SHALOM TO OUR TBE COLLEGE STUDENTS AND THOSE WHO ARE ABROAD!  LET US KNOW WHAT THE HOLIDAYS HAVE BEEN LIKE ON CAMPUS OR AT WHICHEVER EXOTIC PLACE YOU HAPPEN TO BE!  WE MISS YOU!

Shabbat Shalom and G'mar Hatima Tova (May you be sealed for a good life)!

The Shabbat between Rosh Hashanah and Yom Kippur is called Shabbat Shuvah, (read more about it here), emphasizing themes of return and repentance. It's a quiet, reflective Shabbat, so join us on Friday night and Shabbat morning to quietly reflect.  Also, don't forget the sisterhood clothing drive on Sunday, our 2020 B'nai Mitzvah class family program, and of course our annual Person to Person food drive.

It's a time of both looking back and forward.  So let's look back for a moment, and thank our choir, Katie Kaplan and Beth Styles, for their inspirational music.  The services had so many "high notes," both literally and figuratively.  Here are a couple of samples from the fantastic music that we heard, taken from the "live" recording: Yevarechecha (Priestly Blessing), composed by Beth and sung by Beth and Katie, and a premiere of an Ahavat OIam (Eternal Love) that they wrote together.

Text and audio of my sermons for the two days of Rosh Hashanah can be found at
https://www.joshuahammerman.com/2019/10/high-holidays-sermons-5780.html.
Feel free to share.  Some snippets were also found in this article in the Forward that collected excerpts from the sermons of 65 rabbis across the country.

Looking ahead to Yom Kippur, the Martyrology section of the Musaf service will include original readings created to mark the murder of Jews in Pittsburgh a year ago.

My theme on the first day of Rosh Hashanah was re-imagining tribalism. See above how an Israeli artist depicts the current 12 Tribes of Israel (click for website): Ultra-Orthodox, Israeli Arabs, Ashkenazi, Mizrahim, settlers, American Jews, Ethiopians, Russians, LGBTQ, the young, the veterans and refugees.  While each tribe is distinct, the colors and designs produce a collective harmony that is far greater than the sum of the parts.  This work is based on the famous "Four Tribes" speech of President Reuven Rivlin a couple of years ago.

5780: Regression from the Meanness

My op-ed, 5780: Regression from the Meanness, featured by the Times of Israel, includes some highlights from my sermon on the first day.  Here is an excerpt from the article:

Despite this, Jews are continually taking the high road, demonstrating to the world that the ends don't justify the meanness. This past year, the old post-Holocaust mantra "Never Again!," created in the 1970s by Meir Kahane's Jewish Defense League as a call to vigilante vengeance, was usurped by young progressives who established "Never Again Action" to defend migrants facing deportation. "Never Again" had already found its way to the streets of America a year before, in the cries of the Parkland students and the anti-gun-violence movement they spawned. And now, the Kahanists have yielded that post-Holocaust refrain to the spiritual disciples of Heschel and MLK on the streets of American cities. Simultaneously in Israel, the one clear message of last week's otherwise inconclusive election was the decisive rejection of the Kahanist Otzma party.

The response to cruelty is visceral and universal. One photo of a dead girl and her father in the Rio Grande outweighed a thousand presidential tweets warning of an "invasion." In July, xenophobia in this country hit a new low with race-based attacks that several people of color - elected representatives - should go back "from whence they came."

In Pirkei Avot 3:1, Rabbi Akvaya gave perhaps the best Jewish comeback ever to that hateful assertion:

Reflect upon three things and you will not come to sin. Know from where you came and where you are going and before whom you are destined to give account and reckoning. From where have you come? -from a putrid drop. Where are you going? - to the place of dust, worm, and maggots. Before whom are you destined to give account and reckoning? - before the Holy One, blessed be God.

The rabbis understood that we all come from humble biological beginnings and we'll all end up in the same maggot-infested place, six feet under. So if anyone ever has the insolence to tell you to go "back where you came from," call 'em a putrid drop. But do it politely.

And Saul sent messengers to arrest David; and when they saw the company of the prophets prophesying, and Samuel standing over them, the spirit of God came upon the messengers of Saul, and they also prophesied.

Saul's messengers came to harm David, but they were so taken by the pure, tender faith displayed by Samuel that these thugs instantly melted into angels of mercy.

If you take the numerical value of each Hebrew letter of that verse, using the kabbalistic tool of gematria, the sum total - which occurs for no other verse in the Bible - equals 5780.

So let that verse inspire us to proclaim 5780 as the year when meanness will meet its match and kindness will at last prevail.
Eastern Europe Trip 2020 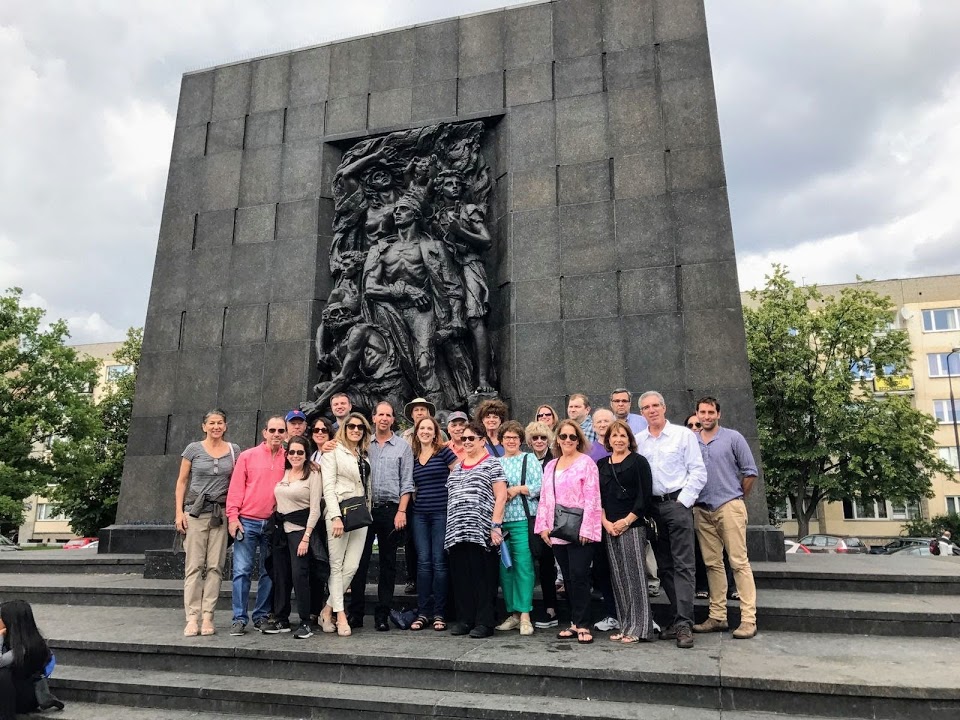 If you are interested in next summer's Eastern Europe trip, know that the site has now gone live. Check the itinerary and sign up now!   Click  here for the trip's home page - and see the flight information, which has just been posted.  Note that the early bird deadline is approaching quickly.  So reserve online and share the link with your relatives and friends!  And please note that we will be providing scholarships of $500 (or more) for all teens and college students who come with their families.