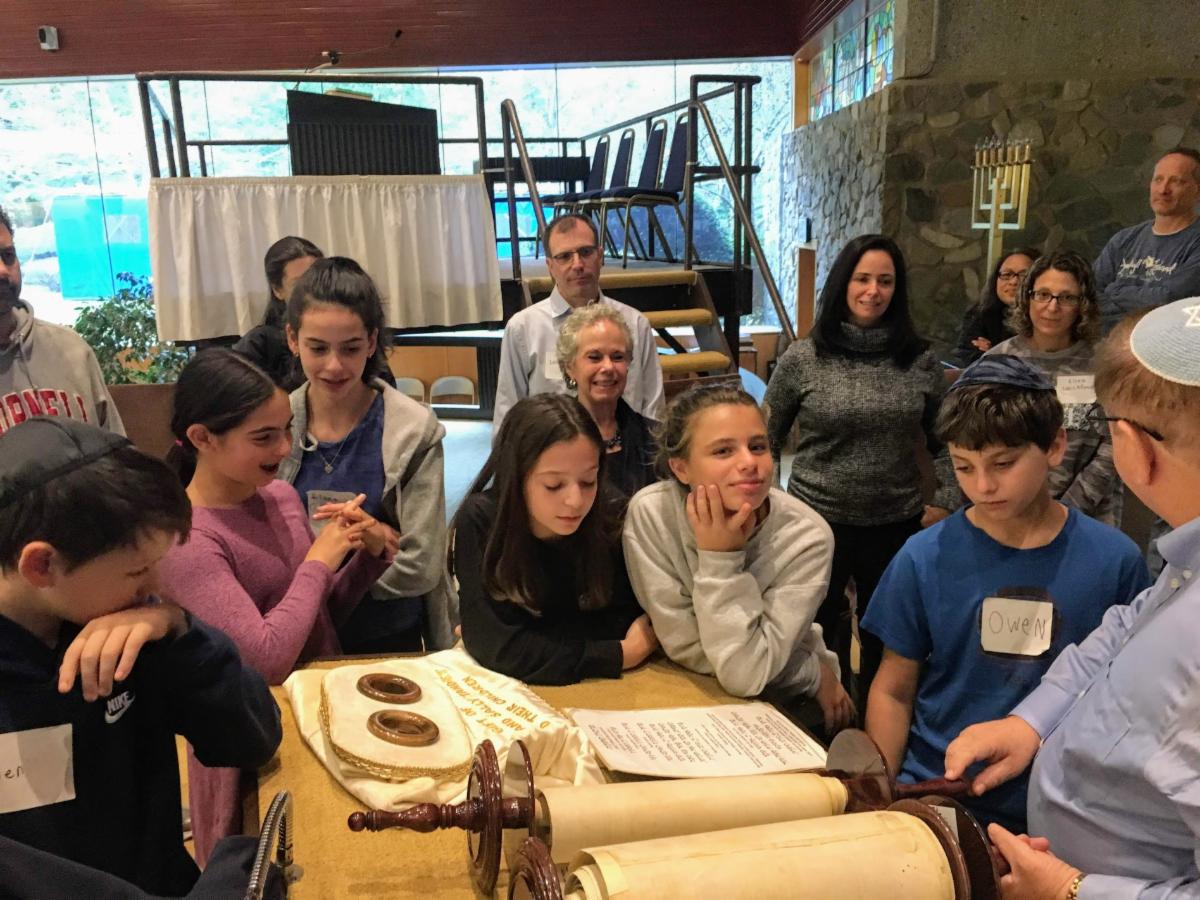 Below: the final shofar blast of Yom Kippur (screen grab from streaming video) 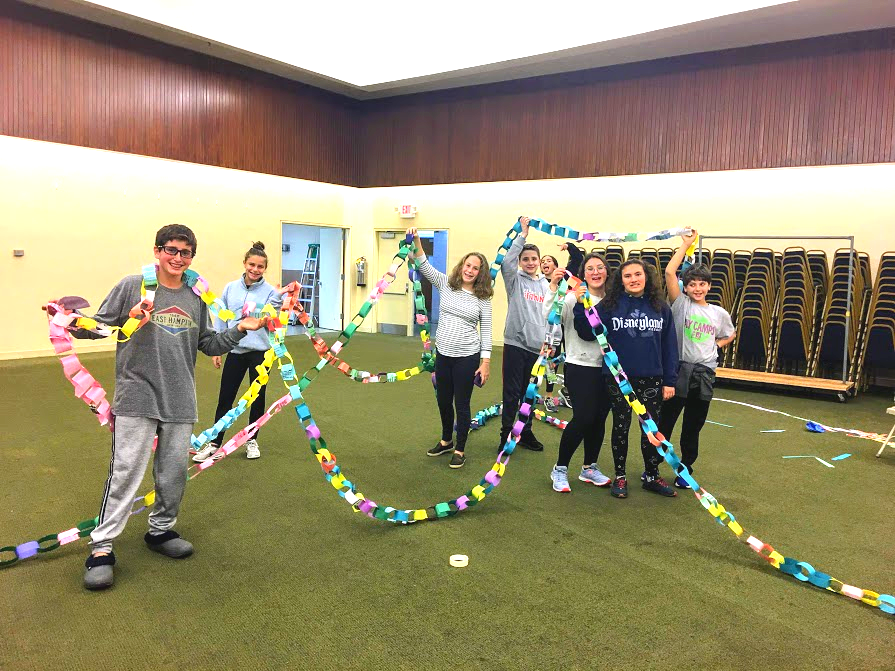 We are coming off a Yom Kippur that had so many high points.  Special thanks to Katie Kaplan, Beth Styles and all our musicians. The combination of new music and traditional gave the service a sense of timeless relevance and global reach, with a taste of Gospel, Irish and Mizrachi (Eastern Jewish) combined with good old fashioned Germanic / Ashkenazic traditional.  It was downright thrilling - and to know first hand just how much time Katie and Beth put in to envisioning and designing this service - along with the beauty of their voices and the energy of the choir and musicians - well, it was wonderful, and that's precisely what we are hearing from so many in the congregation.

As a special treat, and with Beth and Katie's permission, here are a couple of musical clips from our services:

Carl Weinberg shared inspirational words, we had lots of babies to bless (including at least two who were blessed remotely via streaming video), people came earlier and stayed later, and we were filled to the very back on Yom Kippur during the peak attendance period.

Now we move ahead.  Tonight's service will feature Beth Styles, assisted by Tricia Small, as well as our speaker on the Jews of India, Ruth Greenfield (see flyer at bottom).  Shabbat morning will feature Douglas and Nathaniel Herman reading Torah and the baby naming of Hannah Miller, daughter of Matt and Jamie.  Cantor Debbie Katchko-Gray will join me on the bima tomorrow.

Then, on to Sukkot on Sunday evening.  At five we'll bless our animals and enjoy "pizza in the hut."

See this G-dcast cartoon on how Sukkot helps us get back to basics.
And this web journey on the meaning and history of the lulav and etrog.
Herman Hesse wrote, "One never reaches home, but wherever friendly paths intersect, the whole world looks like home for a time."
The prime message of the sukkah is that what makes a home truly secure is not the strength of its walls but the love, faith and warmth shared within.
Or, as Rabbi Jonathan Sacks has written:
It's a simple festival. We take a palm branch, a citron, and some leaves of myrtle and willow, to remind ourselves of nature's powers of survival during the coming dark days of winter.
And we sit in a sukkah, the tabernacle itself, which is just a shed, a shack, open to the sky, with just a covering of leaves for a roof. It's our annual reminder of how vulnerable life is, how exposed to the elements.
And yet we call Sukkot our festival of joy, because sitting there in the cold and the wind, we remember that above us and around us are the sheltering arms of the divine presence.
Sukkot @ Home 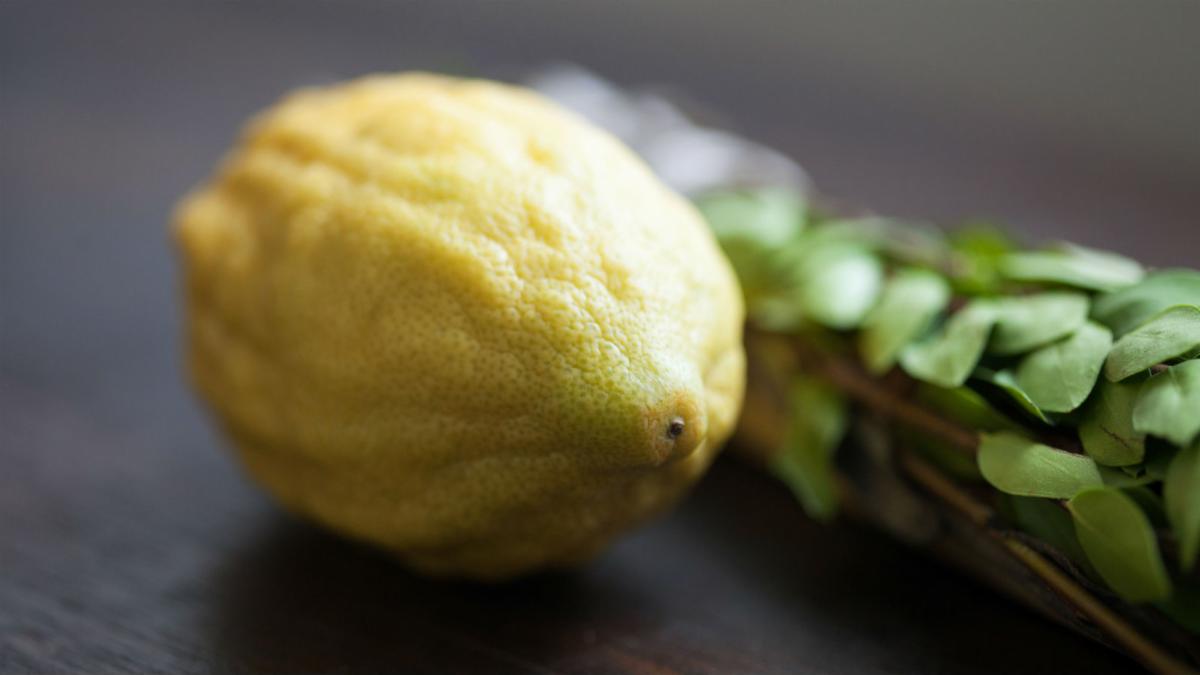 This article from MyJewishLearning gives some good basic background on how to celebrate the Festival of Booths.

The theological and agricultural dimensions of  converge in the symbolism of the temporary shelter, covered with cut branches, called the sukkah. According to traditional sources, the  commemorates both the temporary shelters in which farmers dwelt at harvest time to be close to their crops and those of the Israelites as they wandered in the desert.
Both the holiday's celebration of the harvest and its remembrance of Israel's vulnerability in the desert point to human dependence on God's beneficence and the consequent obligation to give thanks to God. The home customs of Sukkot also encompass both dimensions.

Basic Requirements for the Sukkah

The sukkah (plural: sukkot) gives the holiday its name, and one of its defining commandments is for Jews leshev ba-sukkah, "to dwell in the sukkah." A sukkah may take a variety of forms-from a relatively elaborate wooden structure, to a simple hut on an apartment balcony, to a prefab of aluminum poles and canvas walls-as long as it satisfies a few basic requirements. A sukkah must have at least three walls and be constructed of materials that can withstand an average wind, like heavy blankets, canvas, or wood. The roof must be covered with s'chach-a product of the earth that is no longer attached to the earth, for example, wood, bamboo poles, tree branches, but not a tree (it's still connected to the earth). The s'chach should provide more shade than sunlight in the daytime, yet allow the brightest stars to be visible at night.

How to Decorate the Sukkah

Having satisfied the basic requirements, the sukkah may reflect the imaginative fancy of the builder, and decorating the sukkah can be a creative whole-family activity. In line with Sukkot's nickname as zman simchatenu, "the season of our joy," it is a custom, although not a requirement, to decorate the sukkah. Possibilities are endless: Rosh Hashanah cards, paper chains, paper lanterns, mobiles on hangars, laminated posters with Jewish and Sukkot themes, or even strings of colored electric lights. To reflect the bounty of the harvest, people also hang fruit, gourds, cranberries on a string, or Indian corn, but some prefer plastic fruit to avoid waste. Another custom that expresses the sense of joy and celebration is to wear new clothes on this festival.

Meals in the Sukkah with Ushpizin (Guests)

Once the sukkah is assembled and decorated, it is time to "dwell in sukkot for seven days," as the  instructs. But what does this "dwelling" entail? Halakhah, Jewish law, understands this so mean that one must "make the Sukkah like a home." This has been interpreted differently in different traditional communities depending mostly upon climate. The broadest interpretation is that most major life activities should happen in the sukkah-eating meals, relaxing, entertaining, studying, and even sleeping. However, many Jews limit their sukkah dwelling to eating. Even for traditionalist Jews, if being in the sukkah would cause great discomfort-for example, in a heavy rain-the minimal requirement would be to recite the blessings for dwelling in the sukkah, wine, bread, and, on the first two nights, the
shehecheyanublessing. Then the meal could be continued indoors.
A sukkah custom developed by the kabbalists, or Jewish mystics, was to invite seven biblical ancestors, or "faithful shepherds" as sukkah guests. The traditional invitees are Abraham, Isaac, Jacob, Joseph, Moses, Aaron, and David; each night a different one of these seven guests, called the ushpizin, is considered the most honored guest. In mysticism, each of the figures mentioned represent one of the sefirot [emanations], an aspect of the Divinity. This practice reflects the mystical notion of the Sukkah as symbolic of the Divine, and the Jew dwelling with and within the Divine.
Today some liberal Jews also invite either the wives of these shepherds, or seven other worthy Jewish women. One old kabbalistic tradition, for example, invites the biblical figures Sara, Miriam, Deborah, Hannah, Abigail, Huldah, and Esther. Some  communities prepare a specially decorated chair for the main guest of each evening. It is also traditional to invite living human guests to share the joy of eating in the sukkah. 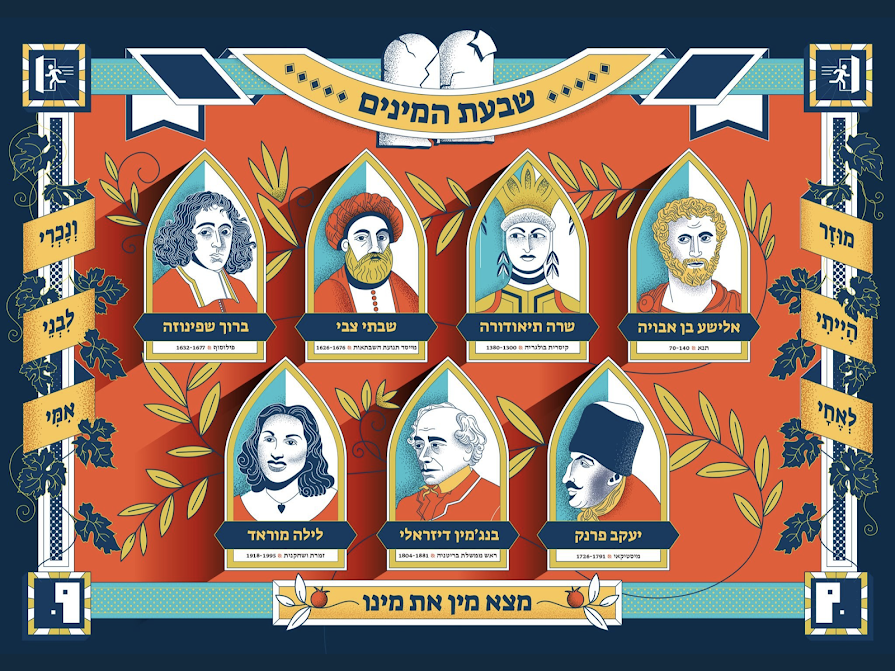 In the spirit of welcoming famous guests to the Sukkah, this wall-hanging features some infamous ones.  It's a play on words - the "seven species" indigenous to the land of Israel (eg wheat, grapes, olives) are featured on this harvest festival - and the "four kinds" are especially so (palm, citron, willow and myrtle).  The term used for those seven and those four is "minim."  That same Hebrew word has multiple meanings, including heretics.  Well, the Dov Abramson Studio in Jerusalem came up with this clever idea, a Sukkah poster celebrating seven great heretics of Jewish history. It's the talk of Twitter among rabbis and other Jewish intellectuals who have better things to do with their time.  Included among the heretics shown are Jacob Frank, Elisha Ben Abuyah (about whom the book "As a Driven Leaf" was written, Benjamin Disraeli, Sarah Theodora, Baruch Spinoza, Shabbetai Tzvi, and Laila Mourad.  Who from this rogues gallery would you welcome into your Sukkah? and while they all went rogue in some manner, who among these has seen their reputation vindicated over time (I'm looking at you, Spinoza)?  Ben Abuya is a fascinating study of a very modern mind who lived way before his times. In any event, check out these famous heretics.
The Four Species: Lulav, Etrog, Myrtle and Willow
Another Sukkot commandment, the waving of the Four Species, while primarily a synagogue tradition, may also be done at home if a person is unable to go to the synagogue. The  (palm branches), hadasim (myrtle) and aravot (willow), are inserted in a woven holder and held together with the  or citron to wave the four species, accompanied by the blessing al netilat lulav, "on the taking of the lulav." The actual waving-first to the east, then south, west, north, up, and down-usually takes place at the morning service before
Hallel, or "Psalms of Praise," on all seven days of Sukkot (except for Shabbat); if not, it can be completed any time during daylight hours. Although most commonly the lulav and etrog are purchased through a local school or synagogue, in urban Orthodox neighborhoods in the United States or in Israel, markets are open before Sukkot where people can examine the four species before buying. For more details, including the full text of the bessing, click here. 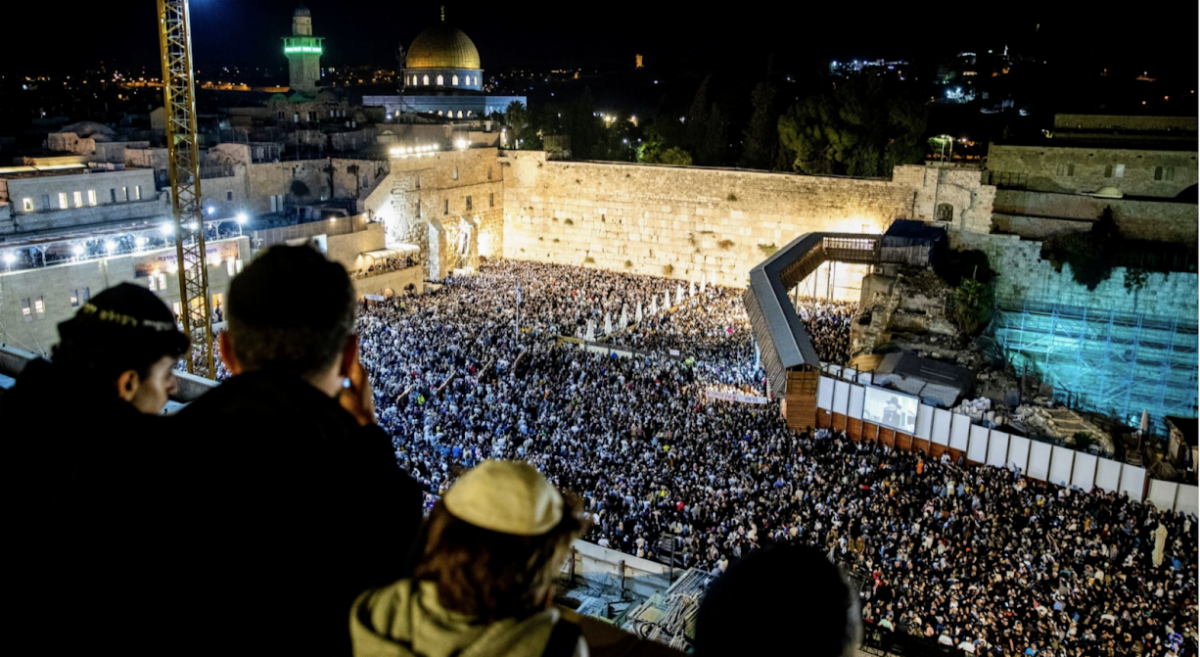 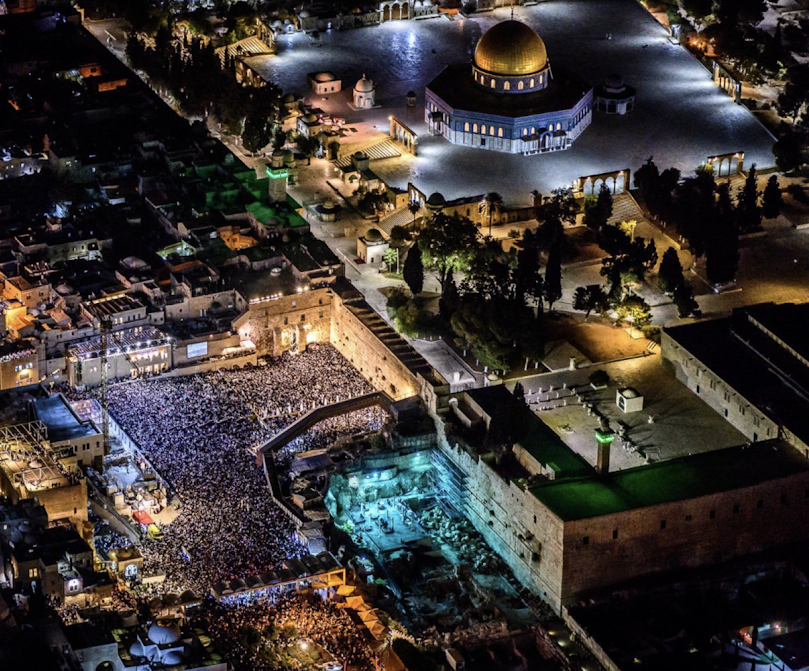 Was Columbus Jewish - and does it matter?

And finally, here are some of the key arguments that have been made for Columbus' Jewish ancestry:
http://www.ucalgary.ca/~elsegal/Shokel/911014_Columbus.html

In the end, does it matter? Well, not long ago I referred to the study claiming that 20 percent of the Iberian Peninsula has Jewish ancestry, so it's hardly surprising that he could have been. But what matters more is that Chris's big journey to the Indes be understood in the context of the huge event swirling around it, specifically the expulsion of Spanish Jewry, which took effect one day before Columbus set sail. His crew contained refugees of that calamity. Undoubtedly, his voyage was financed at least in part from the stolen property of Jews. And ironically, just as, on that fateful summer day in 1492 the Jews were shooed away from a place that had been their center and refuge for half a millennium, Columbus' ships set sail for a place that would become a saving refuge for many - Jews and others - and a prime center of Jewish life half a millennium later.

So the Italians, Spanish and others can haggle over who gets to lay claim the guy. He was, after all, not too nice to the natives once he arrived, to the point where my alma mater, Brown University, changed the name of this weekend's school holiday to "Fall Weekend" (Remember, Political Correctness was invented there.)

I don't covet Columbus as a Member of the Tribe. But I want his day to be a reminder to all of the cost of cruelty and the impact of expulsion.