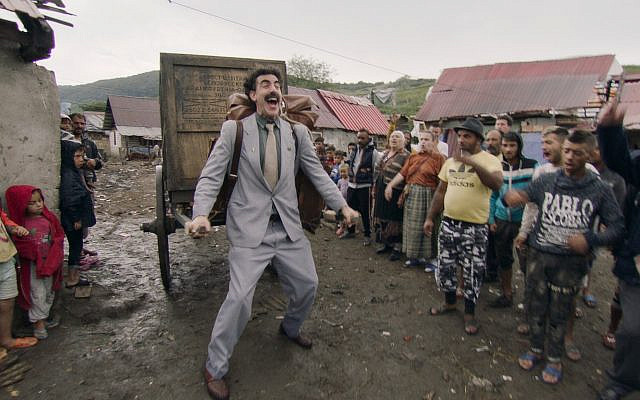 Sacha Baron Cohen in the trailer to the Borat sequel. The trailer was released by Amazon on October 1, 2020. (Amazon Studios)

I watched the new “Borat” movie last weekend and while I didn’t laugh out loud as much as I did back in 2006 — and I may have cringed twice as much — I came away once again admiring Sacha Baron Cohen’s ability to smoke out bigotry wherever it may be found. And while those in red states and Kazakhstan may take offense at being the most visible targets of his jabs, the film mocks all bigotry, not just what may be found at gun rallies, cotillions and peasant villages in Central Asia.

The critique is so biting that one wonders how some of the participants could possibly have not been in on the joke, like the baker who obligingly inscribes “Jews Will Not Replace Us (smiley face)” on a cake, or the shop owner to whom Borat asks how many gas canisters it would take to kill a truckload of gypsies.

Cohen was not the first to show us how just plain folk are capable of extraordinary cruelty, but it never ceases to shock us. And it never should.

Yes, there are real people capable of laughing at songs about Saudis chopping up people and somewhere in America is at least one plastic surgeon who can air-trace a Jewish hook-nose that would make Der Stürmer proud.

Sacha Baron Cohen is this generation’s Charlie Chaplin, Groucho Marx and Lenny Bruce rolled into one. His humor is quintessentially Jewish, in that each disarming punchline contains a hidden arrow aimed at the heart of the enemy; the enemy being ignorance, cruelty and hate.

The banality of the evil next door never ceases to shock us, but even more, Sacha Baron Cohen’s sheer chutzpah never ceases to amaze us. With every act of derring-do, he winks at his fellow Jews, who would best recognize the dangers, as if to say, “You think I can survive a few nights with these wacko conspiracy theorists (who turn out to be pretty decent folks)? You think I can expose the hypocrisy of CPAC while dressed as Donald Trump? You think I can nab Rudy himself? Watch me!” For a people used to hiding in closets, Cohen, who hid in a closet while Rudy was being nabbed, is wish-fulfillment incarnate.

While his humor appeals to people everywhere, Cohen inserts hidden clues for Jews affirming that he gets it — he understands that anti-Semitism is the mother of all hatreds, and therefore we have a special mission to combat hatred everywhere, even when it is uncomfortable, even when it’s down the street at the bakery. Our mission is to be able to laugh in the face of evil while showing unmitigated compassion for victims, which he shows for individuals like a Holocaust survivor whom he meets in a synagogue, Judith Dim Evans, arguably the most inspiring person in the film (and whose family also nearly sued Cohen over the incident).

Cohen loves to let his fellow Jews in on the joke. Borat #1 had plenty of Hebrew in it, primarily when Borat is ostensibly speaking his native Kazakh tongue. Aside from throwing a bouquet to his landsmen, this is Cohen’s way of demonstrating that his depiction of Kazakhstan is purely fictitious. Borat might as well have haled from Cossack-stan. Or a Kurdish moshav in the Negev.

One classic Boratism in the first film was the expression, “Wa wa wee wa,” (“wow!”) an hommage to the Israeli comedian Dovale Glikman from golden-age TV show Zehu Ze.

Borat#2 continues in the hilarious tradition of Cohen’s use of Hebrew as a fake version of the Kazakh language. Whenever he speaks with his daughter Tutar, he is speaking Hebrew. (Many) Jews know that. Few others do. It’s the greatest in-joke among Jews since God pranked Abraham at Moriah.

Here are some examples:

Borat’s daughter, played by the amazing Maria Bakalova, has just mistakenly eaten a plastic baby figurine on top of a cupcake. The subtitle says, “Are you OK?” but in Hebrew, Borat is really asking, “Ayfo ha-tinok? – Where’s the baby!?” It’s much more urgent and on point, setting up the next scene perfectly, while also leaving the viewer imagining some plastic dingo running off with it somewhere.

Here, Borat spews up some Hebrew gobbledygook, but ends up saying what I think is “Baruch Hashem ma-she-hu yikra” (God willing, something will happen). You would think he might use a more urgent and negative expression like “Has v’halila,” (God forbid, something should happen). But, in fact, he is turning the phrase on its head and saying that a father loving his children equally (and not caging his daughters) would be a good thing. Which is exactly what God was trying to tell Abraham at Moriah.

What Borat really says in Hebrew is, “I’m taking you to someone who will teach you how to be lovely (nechmad – which also can be translated in Borat-ese as “niiice“).  There is nothing feminist about the influencer they meet; the goal here is not to liberate the girl, but to prepare Tutar to be gifted to a person who is decidedly anti-feminist. But, ultimately, Tutar is in fact liberated. Nechmad is a perfect word choice for the knowledgeable Jew, evoking a well known Hebrew song (and a popular children’s TV program) about colorful butterflies emerging from the cocoons (cages) of childhood. Nechmad is a cuddly word — the word for warmth (cham) is embedded within it, evoking the nostalgic feelings of an old ’70s singalong — there’s even a Poogy song with that name.

You can see how much more there is to the film if you can crack Borat’s secret code, using the Jews’ secret language. And because we get the joke, we know how deadly serious Cohen’s message really is, and can intuit why he urgently wanted to release this “moviefilm” a week before the American election.

Email ThisBlogThis!Share to TwitterShare to FacebookShare to Pinterest
Labels: borat, times of israel