In this Moment: November 13: Good People on Both Sides: Bowing Before the People of the Land 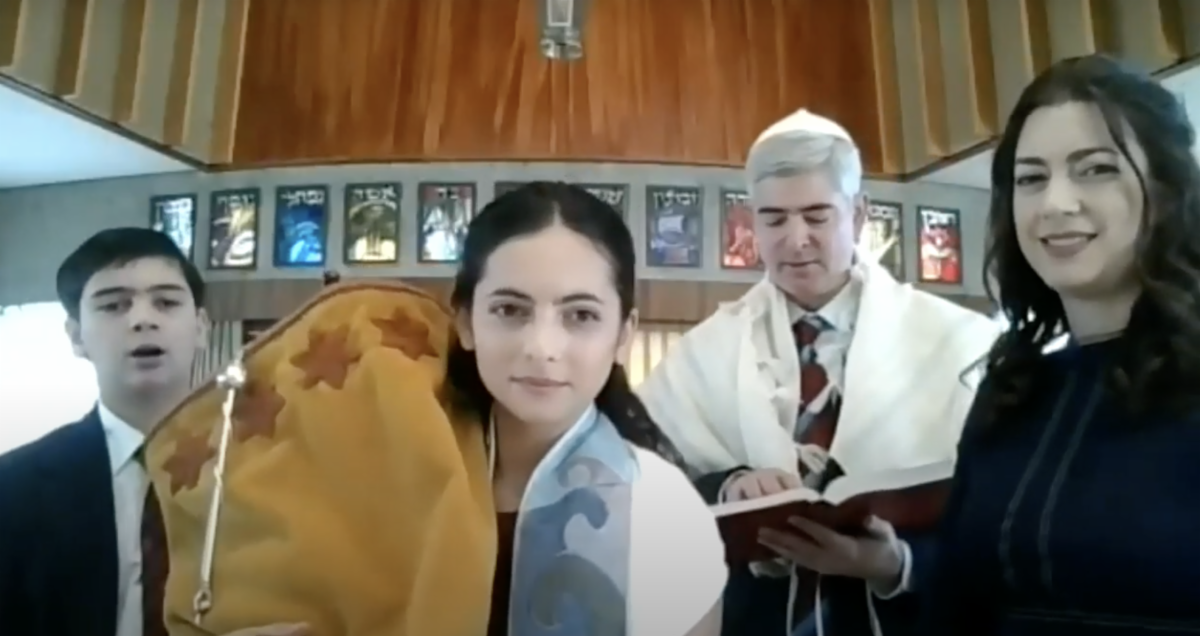 A screen shot from last week's Bat Mitzvah for Maya Shapiro.
Click here for Zoom recording, screen shots and Maya's D'var Torah.
See more photos in our fall album.
In Memoriam
Alex Trebek: (At services this weekend, we'll pay tribute in a most appropriate way).
As we mourn Alex Trebek, we honor the Jewish history of 'Jeopardy' (Forward)
Alex Trebek's Jewish moments (JTA)
Alex Trebek's Quiet Dignity (Aish) - Alex modeled some key Jewish teachings: courtesy, the ability to listen respectfully, and a firm refusal to ever embarrass others. Whether the guests on his show were winning or losing, Alex always treated them as peers worthy of esteem.
Rabbi Jonathan Sacks:
He was one of the leading rabbinic lights of this generation, an articulate scholar who reached across the divide to preach the "dignity of difference."  While he didn't always practice what he preached with regard to Jewish pluralism, he was a model for tolerance throughout the world.
Lord Sacks' website, filled with articles and quotes
Remembering Rabbi Jonathan Sacks (1948-2020): One of world Jewry's most influential leaders and communicators passed away over the weekend, leaving an incalculable void (Tablet)
An essay Rabbi Sacks had prepared in advance for this Torah portion of Chaye Sarah
Good People on Both Sides

Rabbi Jonathan Sacks, z'l
We join with people throughout the world in congratulating President-elect Joe Biden and Vice President-elect Kamala Harris.  There will be a lot to dissect about last week's elections, and we'll have lots of time to do it. But for now I'd like to talk about healing the divisions in our country.
Unfortunately, those flames of division are still being fanned, though the election unified us in two distinct ways.  First of all, there was plenty for everyone to be unhappy about.  No matter what side of the divide you are on, you are not happy about something today.
On the other hand, there is plenty for everyone, or just about everyone, to be hopeful about. We who have clamored for a greater sense of stability, normalcy and menschlichkeit at the upper echelons of our body politic, it looks like that will be on the way.
But even more than that, something remarkable happened last week that should stop us in our tracks and amaze us.  More Americans participated in this election than ever before.  From what we have seen, there was basically no impactful foreign interference, no massive breakdown in the infrastructure of the vote, no massive fraud in voting - all we saw day after day was the mechanics of democracy at work - and boy did they ever work hard - democracy's first responders, putting their health at risk, counting ballot after ballot, systematically, while the rest of us waited patiently.  It was the miracle of democracy at work.  And the world took notice.
The Babylonian Talmud,  Berakhot 58a, records the blessing to recite when seeing a multitude of people (in the original context, a huge gathering of Jews) which reads, "Blessed are You...the knower of secrets." The Gemara adds: "For their minds differ one from the other, and their faces differ one from the other."
While not gathered all in one place, a US election in which 150 million people participated is a large gathering (far larger than the 600,000 envisioned in our tradition). This blessing reminds us that we each hold our own very passionate beliefs about the leaders and policies of our country. Created in God's image, our faces differ, and that diversity is more than skin deep.
In this week's portion of Hayye Sarah, Abraham purchases the Cave of Machpelah from Ephron the Hittite as a burial place for his wife.  As the transaction is taking place, Abraham "bows before the people of the land" in a gesture of humility.

What makes this gesture so fascinating is not its good-neighborliness, but the fact that the expression used for "people of the land,"am ha'aretz," later became a moniker of scorn and derision in Jewish culture.  By the time we jump from the biblical to the rabbinic period, "am ha'aretz" means "ignoramus."  The Wikipedia article on the term traces the change in meaning to the time of the return from the  Babylonian Exile (6th century BCE):
In the Second Temple period, the "people of the land" (am ha'aretz) are contrasted with those returning from the Babylonian captivity, "Then the people of the land weakened the hands of the people of Judah, and troubled them in building".[2] It is unclear whether the term refers to the people of Judah who remained behind and adopted syncretistic views, or to non-Hebrews.[3] Rubenstein (2003) considers that in Ezra and Nehemiah it designates the rural Jews who had remained in the land while the aristocratic and priestly classes were deported to exile in Babylonia.[4] In the view of Kartveit (2009) the terms used in Ezra and Nehemiah may not be precise in their distinctions; there may be implication that the "people of the land" (Ezra 4:4) had intermarried with the "peoples of the lands" (Ezra 9:1 ammei ha'aretzoth), and there may be an equation or relation with the origin of the Samaritans.[5]
By the end of the Second Temple period and beginning of the Talmudic age the negative view crystallized:
The Talmud applies "the people of Land" to uneducated Jews, who were deemed likely to be negligent in their observance of the commandments due to their ignorance, and the term combines the meanings of "rustic" with those of "boorish, uncivilized, ignorant".[6][7][8]
In antiquity (Hasmonean to the Roman era, 140 BCE-70 CE), the am ha'aretz were the uneducated rustic population of Judea, as opposed to the learned factions of the Pharisees or Sadducees.
That negative view stuck and is seen throughout the middle ages and beyond in folklore and halachic texts, though you also see the "am ha'aretz" romanticized in some circles, especially in early hasidism, which disdained ivory tower intellectualism.
"Boorish, uncivilized and ignorant" are terms used to describe rural folks in our age too.  "Country Bumpkin" was demeaning enough in the benign context of TV series like "Green Acres," "The Beverly Hillbillies" and "Mayberry RFD," but we could laugh at it and find some humor there. But over the past few years, the urban/ suburban - rural divide has become a political line of demarcation as never before. The Mason/Dixon Line now exists in just about every state on the outer-outskirts of Atlanta, Dallas, and Westchester/Putnam County.  We can't separate as we might have before.  It's time to see that there are fine people on both sides.
Like many others, I wonder whether last week's results indicate that nearly half the country is OK with the authoritarian tendencies that we continue to see from President Trump.  But I think that's an overly simplistic read of the electorate.  After all, 49 states voted for Nixon in 1972, and that was after the basic contours of Watergate were known.  I don't believe that every Nixon voter condoned the corruption and destruction of cherished American norms. Similarly, I believe that the vast majority of Americans who voted last week - of both parties - are grounded in the same rock-solid values of shared sacrifice, unity, freedom, community spirit, truth, justice and hope for the future.  We just need leadership that will help to bring us to that recognition.
Hand in hand with the respect that Americans of different parties need to show to one another, Americans of all persuasions need to respect our shared values.  We should all summarily reject any effort to attack our electoral system solely for the purpose of personal gain. Read the Brookings Institute's: The character of American democracy: Values-based leadership, which was published yesterday.  It states:
Democracy is a form of government built on a foundation of ethical principles and it cannot survive unless those principles are honored and protected. Values matter because how we adopt laws is as important as the laws we adopt, and all of us are charged with protecting the self-governing principles that are the foundation of our great nation. Unethical leadership can undermine the democratic process, and even democracy itself.
Abraham bowed before the people of the land.  It's that kind of humility that we need more of.  Now, beginning this January, there is going to be a little more Abraham-like menschlichkeit coming from the White House.  It will not be a blue menschlichkeit or a red menschlichkeit, but an American menschlichkeit.