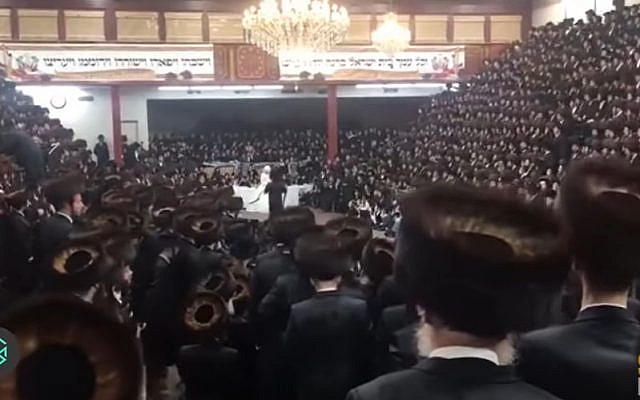 Thousands attend the wedding of the grandson of Satmar Rabbi Aaron Teitelbaum in Brooklyn on November 8, 2020. (Screencapture/YouTubue)

In a surprising and reckless move, last week, the US Supreme Court sided with conservative religious groups in scrapping New York State’s Covid attendance limitations. As a religious leader, I strongly oppose that decision.

For those of us who work in religious institutions, there is no question that we deliver essential services, but my synagogue does not need to be physically open for that to be the case. Congregations with integrity have understood that our most essential purpose is in saving and enhancing lives. We were alerted to some of the dangers unique to our ilk early on in the crisis, when a church choir rehearsal in Skagit County, WA led to the infection of 53 members.

There was something about a lot of people praying together that was getting them sick.

But despite this, there are some clergy who have led their congregations astray and into the pit of disease and death, by flouting protocols and reopening prematurely, sometimes even breaking the law, and encouraging their congregants to shun masks and spacing when it is common knowledge that crowded church services can be superspreading events.

Like that Tampa, Florida pastor who was arrested in April for defying the authorities by holding services for hundreds of parishioners. Or the pastor in San Antonio, who later apologized for encouraging hugging at his church, resulting in at least 50 cases of the coronavirus. Or the Louisiana pastor who was arrested for defying stay-at-home orders after holding live services for hundreds of people. Or the church in Seoul, South Korea, that flouted regulations and was later found to be linked to more than 5,200 cases.

It’s a Jewish problem too. Like that super-spreader Hasidic funeral in Brooklyn that drew 2,500 people. And then there was Rabbi Chaim Kanievsky in Israel, who said that yeshiva students should stop being screened because “it could lead to a mass loss of Torah study.” Then he went on to contract the virus (and recover).

Or the pastor in Maine who, after officiating at a super-spreader wedding, knowingly spread it to his congregation, defiantly mocking state and CDC guidelines, stating that God wants him to expose his people to disease. He said, “I want the people of God to enjoy liberty.”

Give me liberty, or give me breath!

Well, the God I pray to prefers parishioners who are not dead.

Or the thousands who attended a California megachurch, the Grace Community Church. Pastor John MacArthur defied a state order and 6,000 – 7,000 people showed up.

“We don’t orchestrate this, MacArthur said. “This is a church. We don’t ask people to make a reservation to come to church,” he said.

Well, maybe they should. Many do.

“We opened the doors,” he added, “because that’s what we are, we’re a church, and we’re going to trust those people to make adult decisions about the reality of their physical and spiritual health and how that balance works for each one of them,” he said. “Nobody’s forcing anything, they’re here because they want to be here.”

They apparently believe that God wants them to be sneezing all over each other.

They clearly did not read this passage from the Talmud:

If there is plague in the city, gather your feet, i.e., limit the time you spend out of the house, as it is stated in the verse: “And none of you shall go out of the opening of his house until the morning.” (Bava Kamma 60b)

The Supreme Court is encouraging misguided clergy to do precisely the opposite, and to lead their trusting congregants off a cliff.

Ye shall therefore keep My statutes, and My ordinances, which if a person do, they shall live by them: I am the LORD

We are told, regarding the mitzvot of the Torah, “V’chai bahem,” Life takes precedence over just about everything else in Jewish law, including Shabbat observance.

The Talmud teaches that Shabbat is holy only because we are alive to observe it. It isn’t holy in a vacuum. If a Shabbat falls in a forest and no one is there to observe it, it is irrelevant. If the coronavirus kills all of us, when Friday evening arrives, there will be no Shabbat. We “make Shabbos.” If we don’t make it, it doesn’t get made.

So preserving life takes precedence even over Shabbat observance. You are required to profane one Shabbat if that will enable you to live for many Shabbats to come.

The most essential service we can provide is to help people survive until next Shabbat — or to next March, or to whenever the vaccine brings immunity. Nothing else matters. All the rest is commentary.

With vaccines so close at hand, encouraging unnecessary risk by populating our places of worship prematurely is the equivalent of asking congregants to be like those thousands of unlucky soldiers who died on Armistice Day, when all seemed so serene on the Western Front.

We are all responsible to keep one another alive. Religion’s role is to remind us of that fact, imploring us to accept willingly and gratefully the public health advice of experts — even if it means our staying away from the pews for a while.  The Supreme Court should do nothing to detract from that essential objective.

The God I pray to wants us to stay inside, while the pandemic rages on.