Shabbat-O-Gram, December 4, 2020
Mazal tov to Alexander Cohen (and family), who becomes Bar Mitzvah this Shabbat morning.  The Shabbat-O-Gram is sponsored by Alex's parents Sherry and Ken Cohen in honor of Alex. 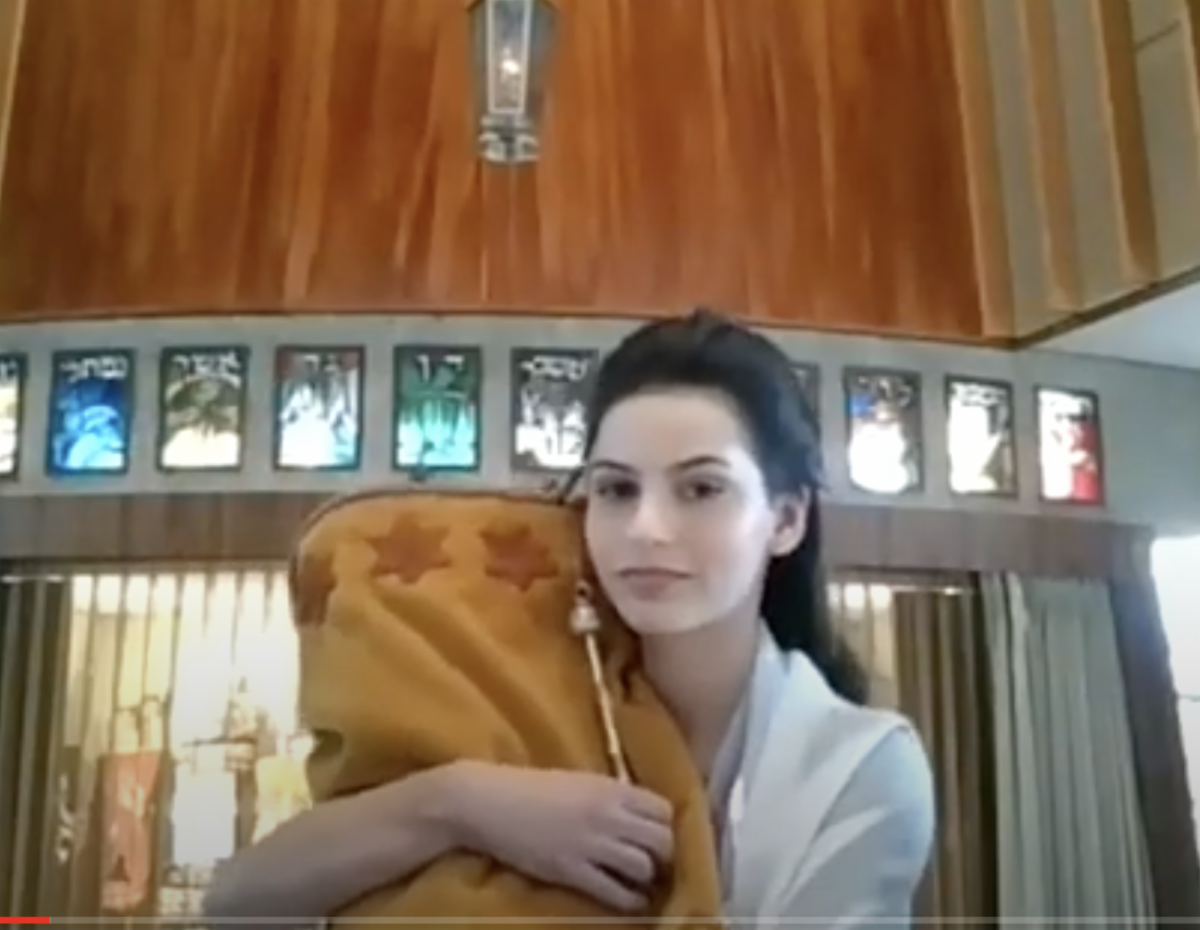 Screen grab from last week's Bat Mitzvah of Ilana Gilbert.
See more photos, videos and her d'var Torah by clicking here.
--------------
Shabbat Shalom!
Mazal tov Alex Cohen, who becomes Bar Mitzvah this Shabbat morning, and to his parents Ken and Sherry, as well as his grandmother Marge Shameer, who is also a long time member of TBE.
As we head toward the Festival of Lights next week, we are faced with perhaps the darkest month in our lifetimes.  Covid is now killing nearly as many Americans per day as died on 9/11.  Each day.  And the Thanksgiving surge is only now beginning to be truly felt. Yes, a vaccine is on the horizon, so this very dark month will herald brighter days to come - but only if we are alive to see them.  With that in mind, I implore everyone to be even more cautious over the coming weeks and not to mix socially if at all possible.  In Los Angeles they are saying, "Just be smart and stay apart."  The same holds true everywhere in the country, with infection rates rising precipitously.
In the midst of the pandemic, we also are refocusing on social justice issues.
This evening is the first part of our two-part series on bias.  I'm also looking forward to next Tuesday, when I'll be teaching the first of a two-part series with Rev. Dr. Michael Christie, "The Jewish and Christian Roots of Racism and Inclusion"on Zoom.  Check our Temple Announcements for the links.
------
Here are some articles worth looking at this week:
Biden nominates Alejandro Mayorkas, Latino Jew who has said Jews face heightened threat, as Homeland Security secretary (JTA)
Politician named Adolf Hitler wins local election in Namibia (Times of Israel)
A house divided will stand (Times of Israel - My commentary on this week's Torah portion)
The Best Jewish Children's Books of 2020 (Tablet)
America Is Careening Towards a Pandemic Nightmare Scenario (Atlantic)
Resources for Christian leaders during the coronavirus pandemic (RNS)
In Memoriam
Sadly, this week we have lost several former congregants who had long term ties to TBE, and two of them with ties to our longstanding havurah (fellowship  group) known as the Discussion Group: Marlene Dobrin, beloved wife of Bernard Dobrin, and Georgiana Geller, beloved daughter of Harry and Polly Geller. You can find Marlene's obituary here.  I've inserted Georgie's obituary below.  Our deepest sympathies go out to both families.
Georgiana (Georgie) Leslie Geller
February 9, 1969 - November 15, 2020
Beloved daughter, mother, sister, companion, aunt, cousin, friend: Georgiana (Georgie) Leslie Gellerof Bridgeport, CT, passed away peacefully and unexpectedly on Sunday, November 15, 2020. Georgie was raised in Briarcliff Manor, NY, Lexington, KY and Stamford, CT and attended Riverbank, Cloonan and Westhill schools in Stamford. She is survived by her parents, Polly & Harry Geller of Stamford, her daughter, Chloe Kelly, her three brothers, Adam and his wife Eiko and their children; Daniel and his wife, Ellen, and their children; Corey and former sister-in-law Laurie Geller; Chloe's father Paul Kelly and his partner Diana Levison, and numerous friends and relatives. Georgie received her religious training and Bat Mitzvah at Temple Beth El, Stamford.
Georgie will be remembered for her warmth and love, her incredible ability to relate to people, and her support of so many in her large network. She is fondly remembered as a Barista par excellence. "You make the best coffee, Georgie." She loved both baroque and rock music and dancing and frequently volunteered at music festivals of her favorite bands. Talented in crafts, she crocheted and knit gloves scarfs and sweaters and enjoyed floral arranging.
Due to the pandemic, a private graveside ceremony was held at Long Ridge Union Cemetery. In remembrance of Georgie, donations may be made to Person-to-Person in Darien/Norwalk/ Stamford or to the Greenwich Choral Society. Georgie, you remain in our hearts; we miss you; you are loved.
Hanukkah begins next Thursday.  See the bottom of this email for a complete listing of our candle-lighting events each night.  On the eighth night, it is my hope that we can light up the cyber cosmos with fully lit menorahs glowing in a hundred Zoom windows, shining brightly from the homes of a hundred congregants.  Or maybe 200 (we upgraded our Zoom account so why not go for 500?).  So join us.
Also, on  Sunday the 13th, join us for another virtual tour of Israel led by Peter Abelow:
Hanukkah, Hellenism and Herod: A Virtual Tour
Sunday, December 13, at 11 AM
Zoom link:
https://us02web.zoom.us/j/85996001054?pwd=UlFQNEFnSWNTRHJ1dUZuWHc0MXNiQT09
Passcode: 940017
Our first Virtual Israel Tour led by expert tour guide Peter Abelow was a big hit, drawing over 50 to the Zoom session in November.  Now, by popular demand, and as part of our TBE Hanukkah celebration, we present our second in the series.
King Herod governed Judea with an iron first during the final four decades before the common era, at a time when the Romans ruled the entire Middle East.  Aside from being a ruthless tyrant, he was a great builder, as well as a descendant of the Hasmonean (Maccabee) family and final link to their dynasty.  His career highlighted the tensions of assimilation (Hellenization) that are key to understanding Hanukkah. Join Peter as he leads us on a virtual journey of places Herod made famous, Caesarea, Masada and Herodium, climaxing with a celebration of Hanukkah for the ages.
Here are some Hanukkah links from MyJewishLeaerning:
Hanukkah 101
Hanukkah During Covid
How to Light the Hanukkah Menorah
Historical Origins of Hanukkah
How to Celebrate Hanukkah At Home
Hanukkah Themes and Theology
During the holiday, at services, lightings and minyans, I'll be using Sources of Light: Hanukkah Inspiration Cards, distributed by Ritualwell. Each of these cards reflects on a different theme each night of Hanukkah, through the lens of the quality represented by each candle.
Here are a few examples: 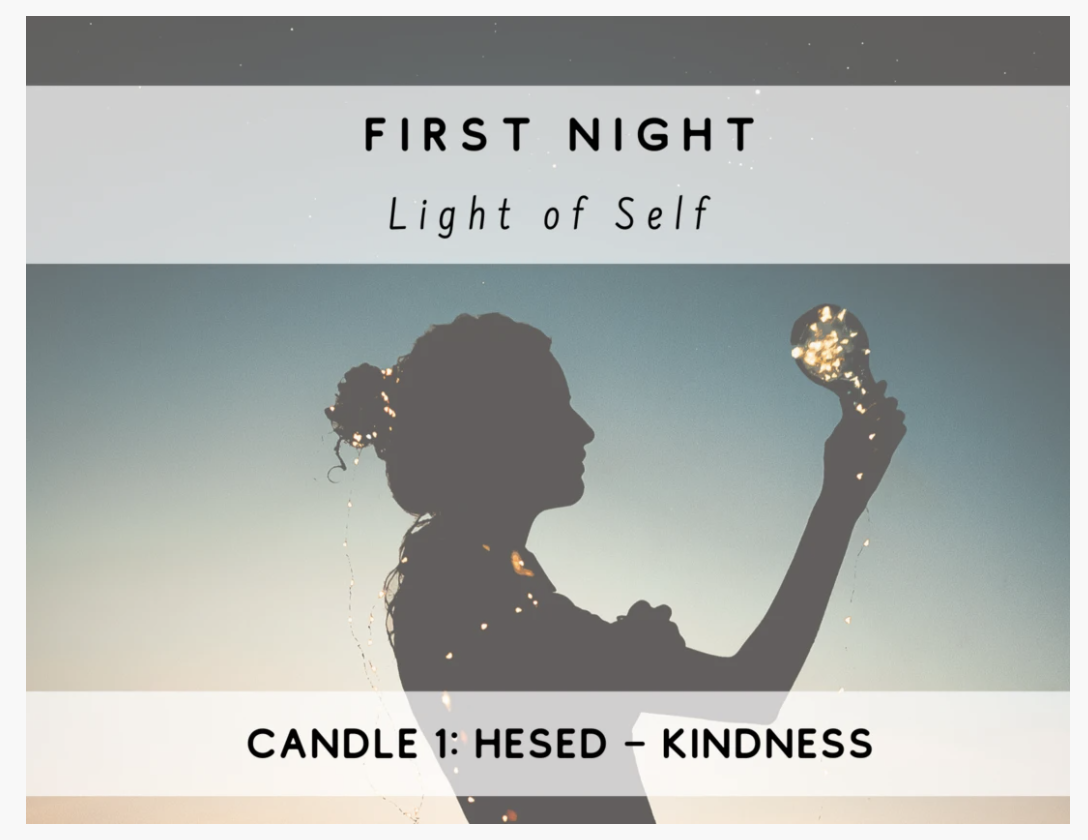 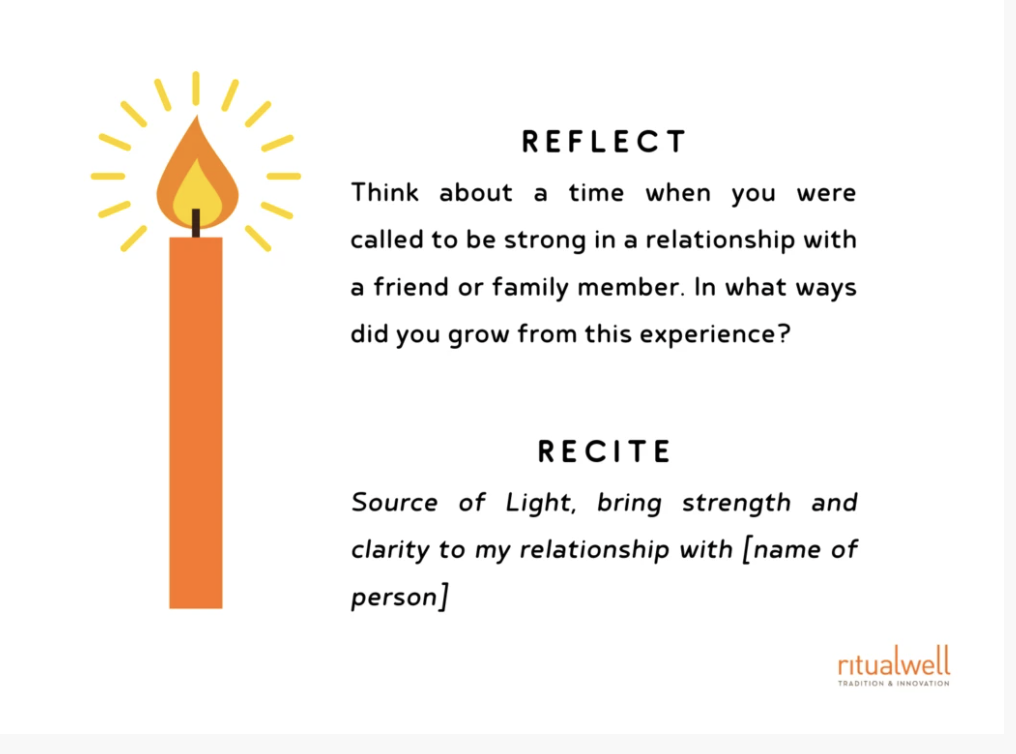 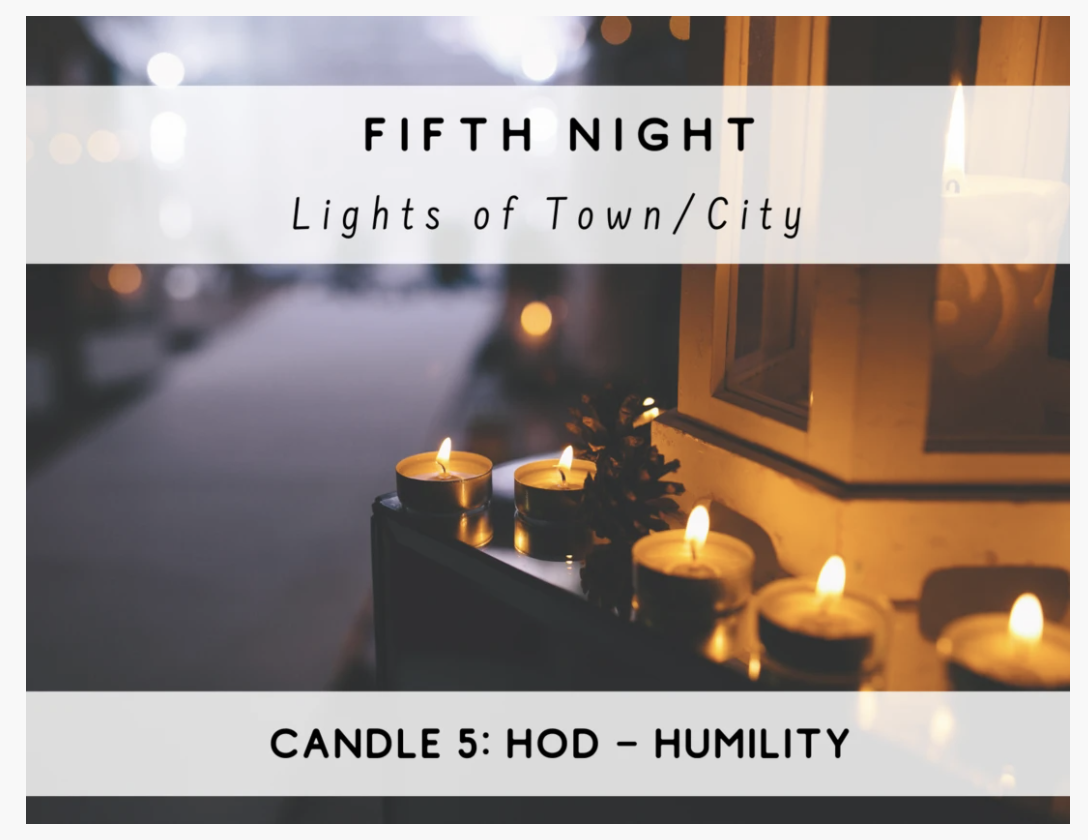 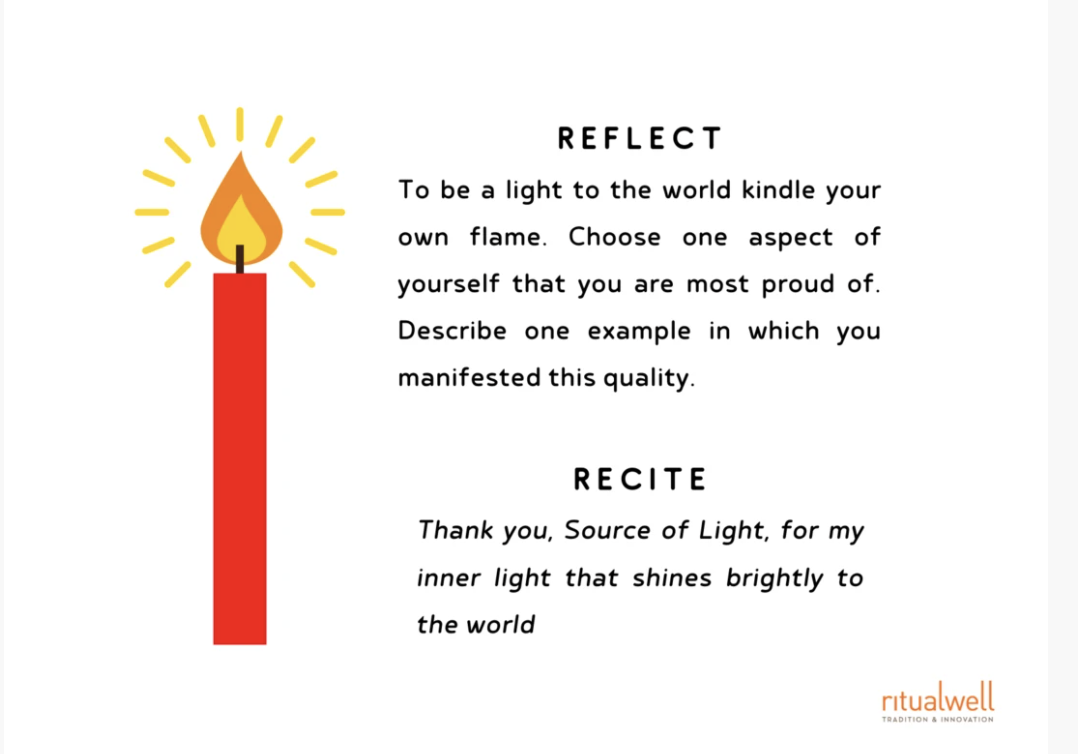 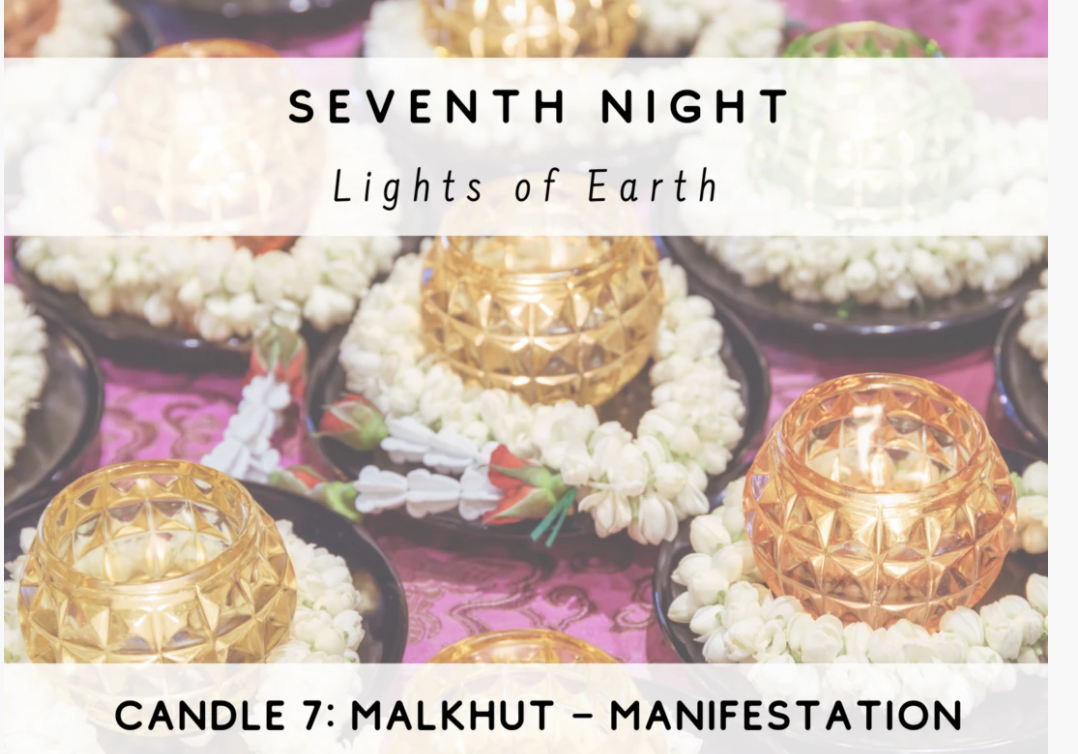 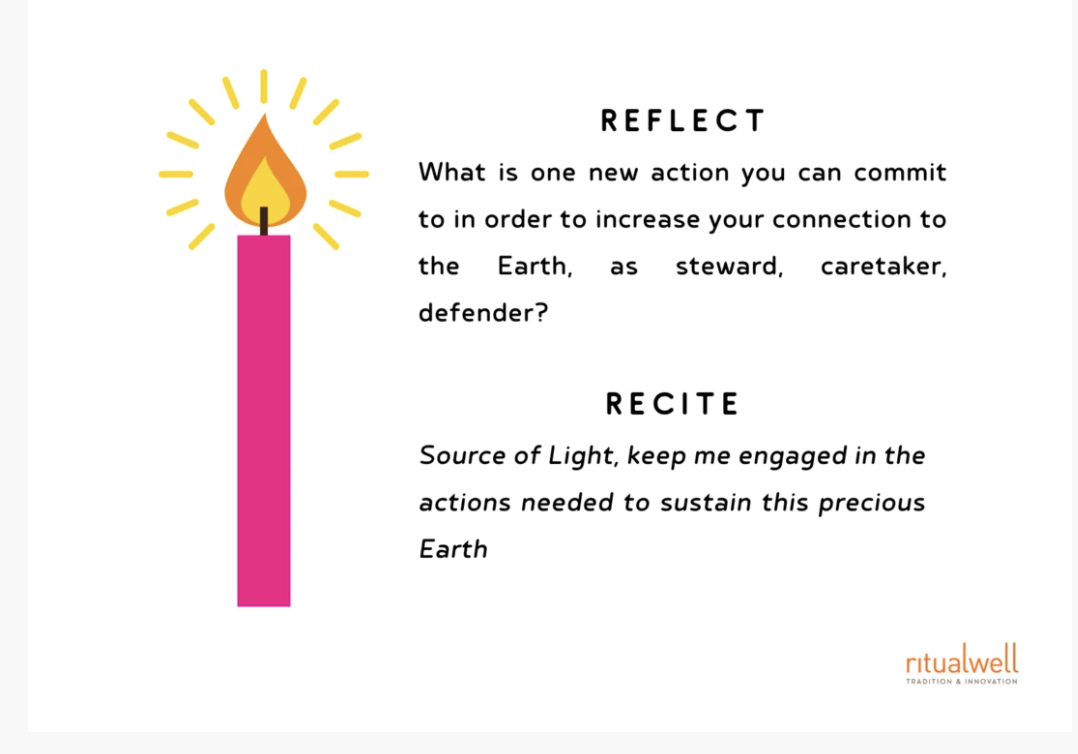 And also these suggestions for your candle lighting:
Light One Candle for Freedom, Dignity & Justice (American Jewish World Service)
The Twenty Sided Dreidel
Hanukkah With HIAS
The Courage to Defy Mass Culture: Reflections on the Lights of Hanukkah (David Hartman)
Rabbi Yitz Greenberg Guide to Hanukkah
The Harmony of the Hanukkiyah

Can the government impose attendance restrictions on houses of worship during a pandemic?  I say yes.
This op-ed, recently featured in the Times of Israel, echoes messages I delivered on Yom Kippur and is a response to last week's Supreme Court ruling restricting the ability of governments to limit attendance at religious services during a public health crisis.  Given evidence such as the photo below of a recent Brooklyn wedding, such restrictions are in fact needed.  My article demonstrates how religious leaders can't always be trusted not to abuse the extraordinary trust placed in them. 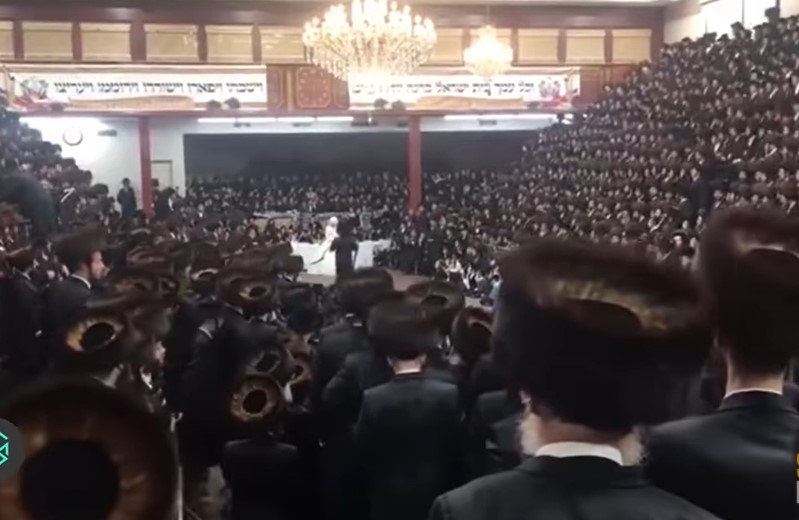 Thousands attend the wedding of the grandson of Satmar Rabbi Aaron Teitelbaum in Brooklyn on November 8, 2020. (Screencapture/YouTube)
In a surprising and reckless move, last week, the US Supreme Court sided with conservative religious groups in scrapping New York State's Covid attendance limitations. As a religious leader, I strongly oppose that decision.
For those of us who work in religious institutions, there is no question that we deliver essential services, but my synagogue does not need to be physically open for that to be the case. Congregations with integrity have understood that our most essential purpose is in saving and enhancing lives.
We were alerted to some of the dangers unique to our ilk early on in the crisis, when a church choir rehearsal in Skagit County, WA led to the infection of 53 members. There was something about a lot of people praying together that was getting them sick.
But despite this, there are some clergy who have led their congregations astray and into the pit of disease and death, by flouting protocols and reopening prematurely, sometimes even breaking the law, and encouraging their congregants to shun masks and spacing when it is common knowledge that crowded church services can be super-spreading events.
Like that Tampa, Florida pastor who was arrested in April for defying the authorities by holding services for hundreds of parishioners. Or the pastor in San Antonio, who later apologized for encouraging hugging at his church, resulting in at least 50 cases of the coronavirus. Or the Louisiana pastor who was arrested for defying stay-at-home orders after holding live services for hundreds of people. Or the church in Seoul, South Korea, that flouted regulations and was later found to be linked to more than 5,200 cases.
It's a Jewish problem too. Like that super-spreader Hasidic funeral in Brooklyn that drew 2,500 people. And then there was Rabbi Chaim Kanievsky in Israel, who said that yeshiva students should stop being screened because "it could lead to a mass loss of Torah study." Then he went on to contract the virus (and recover).
Or the pastor in Maine who, after officiating at a superspreader wedding, knowingly spread it to his congregation, defiantly mocking state and CDC guidelines, stating that God wants him to expose his people to disease. He said, "I want the people of God to enjoy liberty."
Give me liberty, or give me breath!
Well, the God I pray to prefers parishioners who are not dead.
Or the thousands who attended a California megachurch, the Grace Community Church. Pastor John MacArthur defied a state order and 6,000 - 7,000 people showed up.
"We don't orchestrate this, MacArthur said. "This is a church. We don't ask people to make a reservation to come to church," he said.
Well, maybe they should. Many do.
"We opened the doors," he added, "because that's what we are, we're a church, and we're going to trust those people to make adult decisions about the reality of their physical and spiritual health and how that balance works for each one of them," he said. "Nobody's forcing anything, they're here because they want to be here."
They apparently believe that God wants them to be sneezing all over each other.
They clearly did not read this passage from the Talmud, and perhaps the Supreme Court needs to read it too:

If there is plague in the city, gather your feet, i.e., limit the time you spend out of the house, as it is stated in the verse: "And none of you shall go out of the opening of his house until the morning." (Bava Kamma 60b)