Beth El's new logo was unveiled to the board on Tuesday night. It was developed with the help of local (and nationally known) artist Jeanette Kuvin Oren. You can click on the image to see it enlarged.

Those familiar with the story of Jacob know that his dream of angels ascending and descending a ladder took place at a location he came to call "Beth El," "God's Home." A closer look at those verses from Genesis 28 helps us to understand the vision behind this logo (click to enlarge): 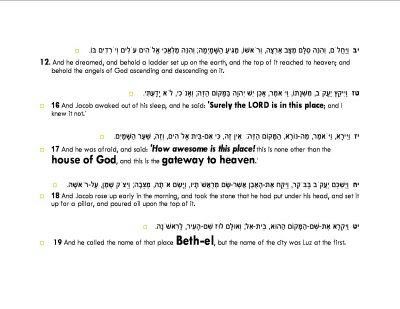 This logo tells the story of a community that is constantly ascending, striving together to reach a the loftiest of goals. This is an inclusive, embracing (but not suffocating) community, an egalitarian and diverse one (note the wheelchair, for example) but where all the generations (note the cane) are mixed. We are interdependent, always reaching out to help a neighbor.

We are also a participatory community. Some may be higher at the moment, but no one is holier. Everyone is at a different place on a personal journey, but all are on the same journey, headed in the same direction. One might say that "home" in this scheme ("Beth El") is the journey, rather than the destination. One congregant compared the rungs of the ladder to Reb Nachman's Narrow Bridge (Gesher Tzar Me-od), yet note how, no matter how perilous the journey. everyone is dancing, joyous. There is a dynamic energy to this fearless ascent, and what we see here is the essence of a sacred community. Our courage comes from our unity and our willingness to link hands.

There is also an authenticity, rooted in the use of Hebrew, along with the linkage to the Torah's story and imagery. We are tied to the past even as we march upward toward the future. The ladder is planted solidly into the grounding of TBE's own heritage, as well as the broader Jewish one.

Plus, with our website url proudly displayed, we signal our desire to be current and cutting edge in all respects.

Jacob awoke from his dream at dawn, the same time when, years later upon his return to the Land, he wrestled with his Higher Self (or an angel, or God). We, as children of the original Israel, are God Wrestlers as well, struggling to make sense of ultimate questions as we engage in spiritual ascent. We also recognize the need for Jewish literacy (hence the books), both to assist in our ascent and to help balance the see-saw like rungs. The lights of dawn illumine this logo; we are nourished by the rays of a rising sun and its promise of a new day. But that sun isn't blinding. The dawn is not only extraordinarily colorful, but it also reminds us that real life is not lived in the glare of noon or the blackness of midnight. Life includes all shades; we are guided by nuance and bathed by a light that changes by the second, an endless variety of color, along with all shades of gray.

This is also the world of pluralism, dialogue and humility. Morality and knowledge are not relativistic, neither is the truth "black and white." We are always climbing toward greater clarity, as our knowledge increases, but we never quite get there.

We looked at lots of logos of other synagogues for inspiration. Regretfully, not many were very inspiring. In choosing our logo, we could have gone the route of just about every other synagogue, contorting a star of David, twisting it like a pretzel into something that looks original. Or we could have taken a menorah, as so many do, to look traditional. We could even have looked for a new name. After all, how commonplace is Beth El?? Sometimes I feel that there are more Beth Els than Starbucks!

The point here, is that Beth El might just be the most extraordinary and awe-inspiring place found in the entire Torah.

Beth El: Population - 1 dreamer, a few rocks, a magical ladder and a band of angels.

We needed to find a spark of that amazement expressed by Jacob. By being TBE, we add a contemporary twist to an old name (and it makes for an ideal url) without having to give up that old name. To paraphrase Rav Kook, we took the old and made it new, and we took the new and made it holy. The logo speaks our eternal desire to break convention and find creative solutions to problems old and new. Complacency and stagnation have no place here. This is a logo set in motion, more a verb than an image. Tradition and ritual are crucial, but not when they become rote. Spiritual growth requires roots, but its greatest enemy is routine.

I've always been a fan of circles, but when I saw this ladder, I realized that it is right for us and for now. Barack Obama's acceptance speech included the imagery of the ladder, and it is increasingly being used as a metaphor for helping to lift others out of the depths of poverty and despair. I love it also because it makes it absolutely clear that no one is holier than another, as long as we are ascending - and dreaming.

The Conservative movement also increasingly uses the metaphor of the ladder in describing how we grow as Jews in the performance of mitzvot. It's never all or nothing - we ascend one rung at a time. And no really ever makes it to the top! In fact, there is no top rung. No false, cheap n' quick messianism for us. We just keep climbing.

As we ascend toward the new year, perhaps we can begin to think of each rung as a quality of Jewish life that we might begin to adopt - be it a value concept, a section of text or a series of actions - mitzvot - that will help us to ascend. During the upcoming holidays, I'll be discussing various options. Here's one schematic suggestion (again, click to enlarge): 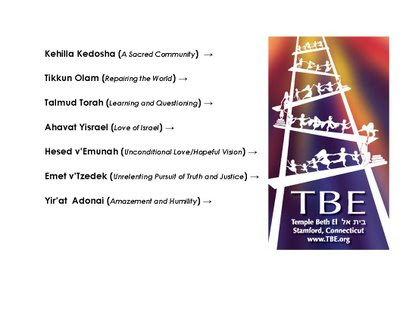 Finally, where was Jacob's ladder rooted? In the soil of the Land of Israel, which he was just about to leave. We too are nurtured and held up by our deep connection to the land, people and history of Israel. But like Jacob, we need to set out on journeys that extend far from those sacred borders as we interact with the world. We seek the protection of angels on this perilous journey and wherever we go, we are energized by our love of our ancient homeland.

Still home is transportable. Like so many in this flat, postmodern world, we are mobile (1 in 5 Americans relocate every year), but we are not social climbers; rather we are Spiritual Climbers. It is in this chapter where Jacob utilizes the word "Makom," which literally means place, but is also a name for God.

Rav Huna said in the name of Rav Ami: Why do we rename God, using the name "Makom?" Because S/He is the place of the world…"

For the Jew, there is no Place like Makom. Our home is everywhere we let God in.

“'How AWESOME is this place! This is none other than the house of God. And this is the gateway to heaven.'”