(My son Ethan's op-ed, appearing in today's Stamford Advocate)
Where Missile Defense is a Way of Life, by Ethan Hammerman
Currently, in the Middle East, a tempest of war is stirring up old resentments among the Israelis and the Palestinians. Hamas continues its barrage of rocket attacks into southern Israeli cities and towns, and the Israeli army has countered with a devastating attack in the heart of Gaza targeting leaders of the Hamas militias. As with any war, onlookers tend to have strong opinions skewed to either side of the spectrum. Some feel that Israel has no legitimate reason to attack Gaza, while others believe that Israel has the right to defend itself from this ongoing threat. 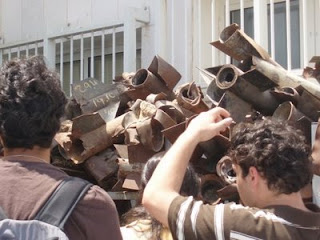 (Ethan, in Sderot, is on the right. Photo by Rachel Weber)

I had the privilege of seeing first-hand one of the focal points of this conflict, the small, embattled Israeli city of Sderot. Located less than a mile from Gaza, and with a population of fewer than 20,000, Sderot has endured a constant bombardment of missiles for eight years, causing numerous casualties and millions of dollars of damage.

The city has become a symbol of sorrow and fortitude: in some ways it could be considered Israel’s Ground Zero.

My visit to Sderot last summer, as part of an ambassadorial trip for a select group of high school journalists from the New York area, showed me how cruel and barbaric war can be, and how the current Israeli action is completely necessary. My group received special clearance to make this visit. We boarded a special bullet-proof and rocket-proof bus and started our journey from Jerusalem down to this flashpoint of the Israeli-Palestinian conflict.

When we arrived, I looked out at the city through my slightly clouded window. It was a beautiful sunny day and the buildings glistened in the light. Outwardly, the city looked not only peaceful, but beautiful. This was not what I expected such a controversial and dangerous city to look like. However, as we journeyed further, we saw many small, subtle signs of past attacks: Some stray shrapnel on the side of the road; bus stops fitted with reinforced roofs and hiding places just in case a rocket happened to be spotted; schoolyard playgrounds with concrete fencing, enabling children to seek safety instantly should the sirens sound.

Our first official stop in the city was the local police station, which has become a social center for residents. Rocket-proofed like so many of the other buildings in the city, the station also hosts a pseudo-museum of missiles fired at the residents of Sderot. In the news, I had always read that these rockets were nothing more than highly inaccurate homemade weaponry. However, after witnessing them in person, I must report that these rockets are legitimate, sophisticated - and deadly. They are mass-produced and designed to kill as many civilians as possible. Bits of metal and shrapnel are inserted into each one, along with poisonous, blinding liquids, in order to cause mass chaos and inflict maximal damage.

I saw over 1,000 rockets that day, and at that time, the museum was adding around one rocket per day to its collection. That does not count the rockets that could not be collected, which greatly increases the total.

The next stop on our tour through the city was at a house that had been hit by a Katyusha rocket.

I witnessed the devastation that had ensued there. The rocket had entered through the back of the house and had sunk deep into the wooden floor before exploding. Shrapnel still littered the house, even after a great deal of time had passed since the incident. Luckily, the family (a man, a woman, and three children) had been away and were unharmed. However, they still had to face the fact that their house had been destroyed, and they needed to find a new home that easily could become tomorrow’s target.

That daily uncertainty is especially scary to inhabitants. One young Sderot resident we interviewed said that every day she fears for her son's life when he goes to nursery school. She is unsure whether she will see him again, or, she added, whether he will ever see her again. This ongoing nightmare is part of the daily life for natives of Sderot.

Our final stop was at a local community center, dedicated in memory of a young 17 year old girl named Ayala-Haya (Ella) Abukasis. One night in early 2005, she was talking to her brother in his bedroom when a Qassam rocket came barreling through the window.

To save her brother's life, Ella gave up her own; she jumped on the rocket and smothered the explosion, which rendered her brain dead. After a week on life support, her parents agreed to stop treatment when doctors told her there was no chance of recovery. After meeting with her parents, I understood something magical about Sderot. Despite the constant threat of Palestinian attack, the people have continued to try to live their lives. They love, they bicker, they work and they play. Unlike in the Gaza Strip, where rights are restricted and people seem motivated either by fear of their own government or their hatred of Israel, Sderot citizens worry about the simple things, like food, shopping, and living their lives to the fullest.

My experiences in Sderot last summer really helped me to understand what’s happening now in Gaza. From my perspective, the Israelis are trying, finally, to stop these senseless attacks on the innocent people of Sderot and surrounding communities. Southern Israel has been the target of over 4,000 rockets since 2001.

Until now, Israel has shown amazing restraint. But the time for restraint has ended. It is important for the international community, especially the United States, to support Israel's right to defend itself. I hope that the day will come soon when the children of Sderot – and the children of Gaza – will be able to live without fear.

Ethan Hammerman, 17, is a senior at Westhill High School in Stamford and Managing Editor of the school’s newspaper, “The Westword.” He visited Israel as part of the "Write on for Israel" program, sponsored by "The Jewish Week" and the Avi Chai Foundation 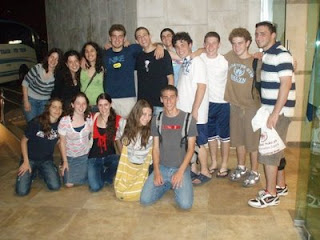 (Part of Ethan's "Write on For Israel" group. Ethan is fourth from the left. Photo by Rachel Weber)

Email ThisBlogThis!Share to TwitterShare to FacebookShare to Pinterest
Labels: Israel, War in Gaza

My compliments to Ethan on a fine piece of writing and more importantly, on a sensitive perspective that is often missing in today's headlines.
Scott