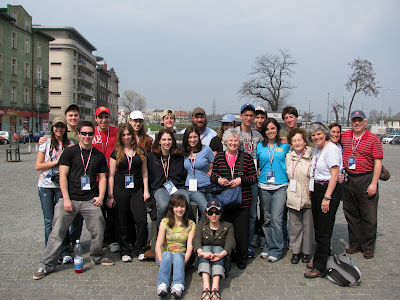 It is just before Shabbat here in Krakow, and I wanted to rush to you our first day's report from the March of the Living. I've uploaded a number of photos from our first day of touring. You can find them at my Picasa account: http://picasaweb.google.com/joshuahct/MarchOfTheLiving2010#


Check for updates through the week - and please forward the link to all those who know people on the trip.

Our flight was delayed somewhat but otherwise uneventful - except for the fact that we were on a plane with hundreds of Jewish teenagers from across the US, flying on the airline of the Jewish state into the very place where Jews were marked for extermination just a generation ago. That, one could say, was eventful. For a planeload of teens, it was remarkably civilized. Of course they filled the aisles and socialized late into the night. But no complaining - maybe on some level they all understood the irony of their taking this journey, one that only a few decades ago was taken by boxcar under much different circumstances. People could bear the lack of legroom and delayed departure, knowing that this was a very different journey to the very same place.

We hit the ground running (once the Polish airport authorities could find a ladder long enough for this jumbo plane - another delay, but a comical one), meeting up with the rest of our staff and heading out to see some crucial sites. In the photos you will see photos of the old Jewish ghetto area, as well as Oscar Schindler's factory (white building, we did not go in), the memorial at the Plaszow forced labor camp, also made famous from Schindler's List and the Rema Synagogue and cemetery. If you look closely at the wall of the cemetery, you can see it is constructed from tombstones desecrated by the Nazis. But the synagogue (founded by the family of the great Rabbi Moses Isserles of Shulchan Aruch fame) still stands as it was before the war.

At Plaszow, we heard the first of what promises to be many inspiring messages from Judy Altmann, a most articulate survivor, well known to many in Stamford, who has joined us and on Sunday will be returning to Auschwitz for the first time.

In ten minutes, I'll be leading Kabbalat Shabbat services for our New England group, about 90 strong, situated here in downtown Krakow at a quaint hotel (and I will tell them how proud I was to see how they helped one another get their luggage up the stairs... yes, stairs.) Setting the tone for this trip - having Shabbat be the ice breaker, in effect, is a daunting task.

For the parents in the group - all your kids are having a great time. We are all in good hands. The Poles are curious about us but everything is very friendly.

Best wishes from Krakow, Poland, and wishing everyone a Shabbat Shalom.

Meanwhile, you can read my pre-trip musings:Toyota, Auschwitz and Chelm. How has the Holocaust turned rabbis into Toyota salesmen... and what can we do about it? 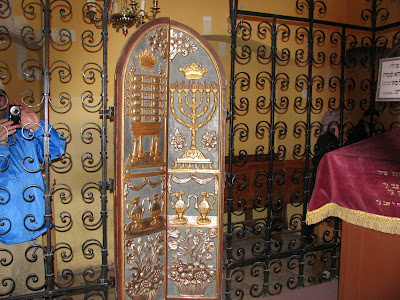 Email ThisBlogThis!Share to TwitterShare to FacebookShare to Pinterest
Labels: march of the living