The March of the Living: Israel - A Young 62 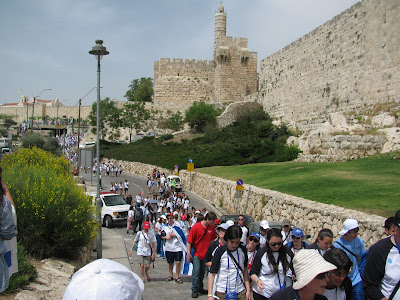 As thousands of MOTL teens piled atop tanks this evening at Latrun and then danced and jumped their way through an electric "mega event," it occurred to me what this was all about. It was about kids, Jewish kids, very assimilated kids, getting together and being, simply, kids. No inspiring calls to a mission. No deep thoughts to convey. Not even any political statements.

I had feared a political punchline to the March in today's concluding events. But there was nothing about our march to the Kotel from Safra Square, or tonight's mega, that would have upset Joe Biden or his boss. It wasn't about Jewish control over this neighborhood or that. It was about Jews being joyous. It was about Jewish kids - alive with passion for life, for Israel and for one another - simply being kids. The closest thing to a political statement made tonight was one in support of Gilad Shalit, and that brief interlude ended with the singing of John Lennon's "Imagine."

Tonight's event had all the political intrigue of an Abba concert, and the music was just as cheezy. It ended up with a rousing rendition of "Halleluyah," which fittingly won the Eurovision contest a generation ago. Because, aside from the pyrotechnics (which were impressive) this event could have been one of those Eurovision contests in the era when Israelis were still watching it in black and white.

One of the teens came up to me at the end, all smiles, saying, "That was so much fun!"

Put into perspective, what response can be better? After our weeklong trudge through the death camps, the only statement that needs to be made is that we are alive. And kids having the time of their lives is a perfect way of stating precisely that. The idea is to channel all those raging teen hormones into love - for Israel and the Jewish people, but for life and humanity.

So here we are, on Israel's 62nd birthday - also Hitler's birthday. And who has turned out better? The newspapers today proclaimed that Israel's economy is growing at one of the fastest rates in the world. Their is a feeling of security in this country that I haven't seen here in many years. The police are much less noticeable (even those security checks at the door) in public places and the people more plentiful. As Israel celebrated her birthday today with cookouts and picnics, Jerusalem was festive in every respect. This already most beautiful city was decked out in her finest. But for the Jewish people, it's not just about Israel. The Jerusalem Post holiday supplement boasted about "62 years of brain power." When Hitler killed the 6 million, he failed to kill the Jewish mind. He also failed to kill the Jewish soul - the human soul in every Jew. Jews are not prisoners to hate and revenge. We love our neighbors, and we love ourselves. Hence John Lennon's "Imagine." We can still imagine a world where people love one another. And the kids will lead us to THAT promised land.

Take that, Fuhrer! We can still love. And we got the kids to prove it. And they are falling in love with each other on this trip (some romantically, for others, lifelong bonds of friendship) and I guess the theory must go something like this: if you fall in love IN Israel, you'll fall in love WITH Israel. It's working.

That's why the March works. It is not indoctrination - unless being human is a doctrine. It's a journey of self discovery and communal connection. And it's worth every minute.

I've uploaded a couple of hundred new photos to give you the flavor of today's events: our return to Jerusalem, the march to the Kotel from Safra Square and the events in Latrun. You can find them at http://picasaweb.google.com/joshuahct/MarchOfTheLiving4Israel#

Thank you to everyone who has written to me responding to these reports from the March. I'll be joined by some of our students at services this Shabbat to give some first hand impressions.

Tomorrow, Masada, the Dead Sea, the Malcha Mall in Jerusalem and preparations for our return. (Alas, the Aussies have yet to get here! Stuck in Poland for an additional week by the ashes). The plane ride ought to be one very long, 11 hour tearful goodbye.

If time permits I may blog tomorrow, but more likely not.

Signing off from Jerusalem on the 62nd birthday of the thriving Jewish state.

Email ThisBlogThis!Share to TwitterShare to FacebookShare to Pinterest
Labels: Israel, march of the living