March of the Living: Lancut and Belzec 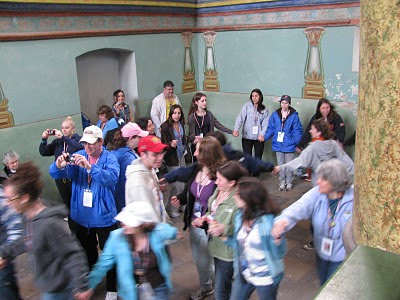 We arrived here at the conclusion of a remarkable day. Read on to find out why.

I've chronicled the experience in photos uploaded here
Find earlier photos here
We left Krakow early this morning and were on the road all day, heading east, through the rolling, lush farmlands of Galicia, toward the Ukrainian border. The small towns and villages of this part of the country has been partitioned over and over, but for the past few centuries, Jews were a large proportion of the population no matter who was in charge, be they Austro-Hungarians, Russians or free Polish...or Germans... until the Holocaust, that is. As we rolled along on a sunny, pleasant day, the grainy black and white photos suddenly gained color, and thick forests took on a fairy tale hue, the grass turned as green as could be. Poland is Europe's breadbasket, and I could see why. I could also see why the mystical threads of Judaism, Hasidism and Kabbala, thrived here. Nature at it's most natural, and most beautiful (outside of Israel, of course).

When we saw a horse pulling a plow, and I almost heard Tevye complaining about it. Yes we saw chickens, loads of chickens, and ducks and even a stork or two. We saw peasant folk aplenty. But what we did not see were Jews, in an area that was once was filled with Jews.

We stopped for lunch in a quaint town called Lancut. The buildings in Poland (frankly) hadn't impressed us too much - until we came here. The photos I uploaded will help you to see why we all felt this was one of the most beautiful shuls we had ever set foot in. Small, colorful, filled with frescoed walls with simple but beautiful artwork and calligraphy.

We sang and danced and prayed, and with the echoes ringing throughout the room, it sounded like many more than just our group were singing. We prayed Mah Tovu, which speaks of the beauty of this place of prayer, as we read its words painted over the entrance to the room. Our singing sounded like we were accompanied by thousands of angels. It got so loud in fact, that a woman came in off the street and asked whether this was indeed a prayer service, intimating that it would be inappropriate for us to be celebrating at a time of national tragedy here. Judy Altmann conversed with her in Polish, assuring her that we were praying. And I stopped for moment while leading the mincha service to explain that we are all sorry for the country's loss and feel solidarity (solidarnosc) with her. She smiled and told Judy that in fact her mother had protected some Jews during the Shoah.

Our next stop, Belzec, was as difficult as Lancut had been enjoyable, (though even through that earlier joy, we knew that we were bringing to life a dead synagogue, whose congregation had primarily been brought here, to Belzec). Nothing remains of the camp, which was destroyed by the Nazis after it had completed its work of rendering Judenrein entire stretches of Poland and surrounding countries. This was solely a death camp, not a labor camp. At least 434,000 Jews were killed systematically, and only a few hundred remained alive at any time, only a handful of them surviving the war.

Then, as we began to say Kaddish for the victims, Judy told us that she had found a plaque memorializing her village (all the Jewish communities that were sent to Belzec are memorialized at the site). This brought closure to one of the great unknowns of her family's life. If her village had all been brought here, as was now confirmed, this is where her sister died. She had never known this before. It was a cathartic moment for her, bringing her to tears. Our group has bonded closely with Judy, so this became a tear-filled, cathartic moment for the teens as well. Many came up to comfort her. Some of us walked back to that spot and I photographed it for her (see it among the uploaded photos). We chanted the memorial prayer, so that now Judy's sister would be properly memorialized, at her own place of burial. We all felt fortunate to have helped her fulfill this quest, as painful as it was, and to achieve some closure.

It was just another example of the remarkable sensitivity of the teens in this group. It is a privilege to be sharing this time with them.

Following Belzec, our group drove another couple of hours to Chelm, where we rest tonight, just a few miles from the Ukrainian border The hotel is actually nicer than the one in Krakow, but some of you may recall that I was concerned about riding in an elevator in a place known to Jewish legend as being unable to distinguish up from down. Well, sure enough, when we entered the lobby, one of the elevators was being worked on - out of order. And when I rode the other one, I discovered to my dismay that there is no inside door. Welcome to Chelm.

Yes, this is an emotional roller coaster - with a tough day upcoming tomorrow, but many more highs than lows to come. But I am learning much more about the Holocaust than I ever knew before, and the shtetl world we left behind. The grainy black and white is gone forever now.

Laila Tov from the tired man of Chelm

Email ThisBlogThis!Share to TwitterShare to FacebookShare to Pinterest
Labels: Holocaust and Anti-Semitism, march of the living