March of the Living: Thy Beauty, O Israel

We’ve been quite fortunate on this trip. So much of the experience is planned months in advance, but the best things happen spontaneously: like the rainbow that appeared in the clouds as we disembarked in Safed this afternoon. 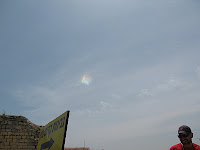 Or the fact that our plane took off for Poland an hour and a half late because of reported fog in Krakow – and then we landed, only to discover the next day that the Polish president’s plane had crashed… because of fog at the airport. Or the fact that our flight out of Warsaw airport was one of the last flights out before the volcanic ash from Iceland brought European air traffic to a standstill. And then there was the sudden flyover of 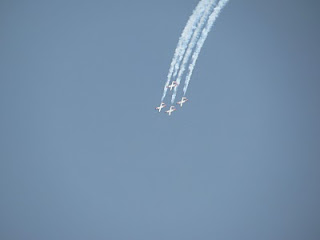 Israeli Air Force jets as we arrived at our first stop in Jerusalem, the Haas Promenade, as they prepared for Independence Day festivities and seemed to be welcoming us.

Or Shabbat. This was a magical Shabbat for the group. Blessed with perfect weather, it began with a Kabbalat Shabbat service featuring a combination of dancing, exuberant singing and quiet meditation. As we looked out over the hills surrounding our hotel, we could literally see the peace of the Sabbath descend as the sky began to darken and the cars suddenly disappeared below us. In the pluralistic spirit that has defined this group, it was decided beforehand that the dancing at services would be with girls and boys together, and it was (girls also helped to lead and one even brought a Middle Eastern drum to assist), and then at dinner, there would be separate dancing, which also happened. But what ensured, totally unexpectedly, was a sense of empowerment by the girls, who, rather than simply standing aside and taking the lead from the boys, formed their own circle and initiated their own songs, even lifting one another up on chairs. It was separate, but it was equal… Of course, I loved it. Pluralism in action. I explained to the kids that given the fact that Israel is the only country in the world where a Jewish woman can be arrested for wearing a tallit, we have much to teach our hosts about loving our neighbor as ourselves – and respecting religious diversity.

There were no exotic davening options on Shabbat morning, but herein lies another spontaneous miracle…and a quintessential “only in Israel” story. Because our hostel lies in a rather remote part of Jerusalem, there were no alternative prayer options available within walking distance…. Unless you are an elephant (we were next to the Biblical Zoo) or a corrupt former mayor (we also were quite near the now-infamous Holyland construction project, which has been the big scandal to hit this week). So, almost everyone in the group opted to go to a lovely Sephardic synagogue in an adjoining neighborhood. We were welcomed with open arms. The service was hard to follow for most of the kids (though it was interesting for them to see a Sephardic torah), but it didn’t matter. When it was announced, in Hebrew, that a group from March of the Living had joined them, the congregation instantly applauded. We were given several aliyahs. Oodles of little kids played with our teens outside, and they were thrilled when our kids shared with them some of the pins they had traded for on the March.

At the end of the service, (at 10:30 AM!) we were invited by a family back to their home for Kiddush. That’s right, all 75 of us who came to the service were invited back. The area is new – less than a decade old – and the apartments are lovely, with a spectacular view of the Judean hills. The entire extended family was rushed into action, ripping open bags of candies, cakes, chips and Bamba, and soon bottles of soda appeared. We stood in the spectacular courtyard of their home, all of us fitting in the tight space, and Yossi, a biologist, teacher and the patriarch of the family, recited the Kiddush. He told us how his family had emigrated from Iran in 1951. Each member of the family introduced him/herself and then we toured their home.

For the kids, it was the perfect Israel experience. We all felt like family. They made it clear, we ARE family. After a difficult week in Poland, nothing could have been better.

We relaxed in various ways on Shabbat afternoon. Some went on a hike, others met up with old friends and family members (Mara, Dan and I met our new great nephew – my sister’s grandson – for the very first time. He is, BTW, adorable). At night we walked atop the Old City walls and then let the kids loose on Ben Yehudah street.

This morning, we left for the north and a quick tour of several parts of this country. All of Israel is awash in flags as Memorial Day and Yom Ha’atzmaut approached. We climbed to Safed and heard from one of the group rabbis about Kabbalistic approaches to life’s pressing issues. The kids shopped and ate and then we were off to our northern base in Beit Sha’an. Later in the day, we set the tone for Yom Hazikaron by watching "A Hero In Heaven," a video about Michael Levin, an American Jew who moved to Israel and died in the 2006 Lebanon War. The film touched us all. Tonight we ushered in Israel’s Memorial Day with a moving ceremony with the community of Gan Ner, in our sister region of Afula-Gilboa. Our kids were involved in the ceremony, which featured poetry, songs and dance. The rabbi of the community, whose first name is Avshalom (the name of David’s son), begin the ceremony by reading from Second Samuel chapter 1, King David’s lament for the loss of King Saul in a battle that also took the life of his beloved friend Jonathan.

“Thy beauty, O Israel, upon thy high places is slain! How are the mighty fallen!”

It struck me immediately that the choice of this opening was no accident, for that fateful battle against the Philistines had taken place in EXACTLY THE SAME PLACE – right there on Mount Gilboa. And once again I felt a deep connection to the land, its history and its people. Israelis all mourn loss on this day – Hatikva was profoundly moving as young children held flags, marching in to a soulful saxe playing the selection from Psalm 34, "Who is the man that desireth life, and loveth days, that he may see may see good therein? Keep thy tongue from evil, and thy lips from speaking guile. Depart from evil and do good; seek peace and pursue it.”

Another psalm of David. Another expression of the Israeli desire to give all for peace.

The ceremony included a song by the popular Israeli singer Rami Kleinstein, ”A Feather in the Wind” (hear it sung here). After the ceremony, another abrupt change of mood, as our teens mingled with the teens from this community. As you’ll see from the pictures, the kids had a fantastic time.

So this weekend we saw the beauty of Israel – its landscape, weather and most of all, the people. And tonight we mourn the best of the best, those beautiful souls who gave all for their country, and for the Jewish nation.

Check out the photos from this weekend at http://picasaweb.google.com/joshuahct/MarchOfTheLiving3Israel#
Posted by Joshua Hammerman

Email ThisBlogThis!Share to TwitterShare to FacebookShare to Pinterest
Labels: Israel, march of the living