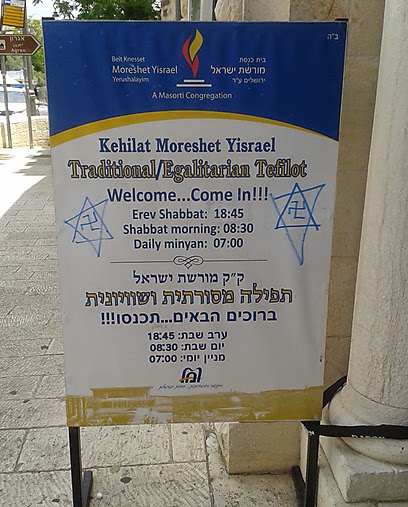 This was discovered today at the Center for Conservative Judaism in the heart - and I mean the HEART - of West Jerusalem.  Was this another "Price Tag" attack?  Of course it was. "Price Tag" has become a generic title for hate crimes committed by Israeli Jews against religious groups that differ from their own.  In this case Conservative Judaism - just as with Reform - is considered "non Jewish" by the xenophobic, hate-filled Jews who did this.  What once was done exclusively to intimidate Muslims on the West Bank, and then shifted to Muslim targets inside Israel, and then Christian targets, now includes Reform and Conservative targets too.

"First they came for the Muslims," and I did nothing.....

And now they have come for me.

Anyone who might suggest that this hate crime (which is at its heart a form of terrorism) might have been committed by an Arab has clearly never been to the corner of Agron and King George.  The chances of that are about as remote as the chances of the Netanyahu government pressing hard to apprehend the offender.