Mazal tov to Susan and Mark Plotzky, who are sponsoring this week's Shabbat announcements in honor of Rachel's Bat Mitzvah.  Mazal tov to Rachel too!

Mazal tov also to our 7th graders, who graduated from Religious School at Thursday evening's Aliyah Ceremony. See photos below and
Click here for more photos from our end of year school events. 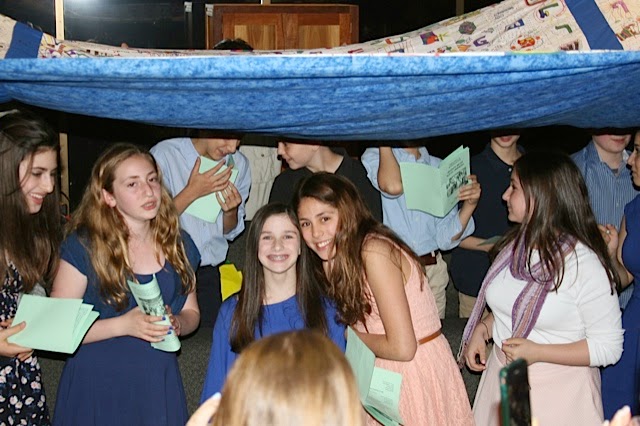 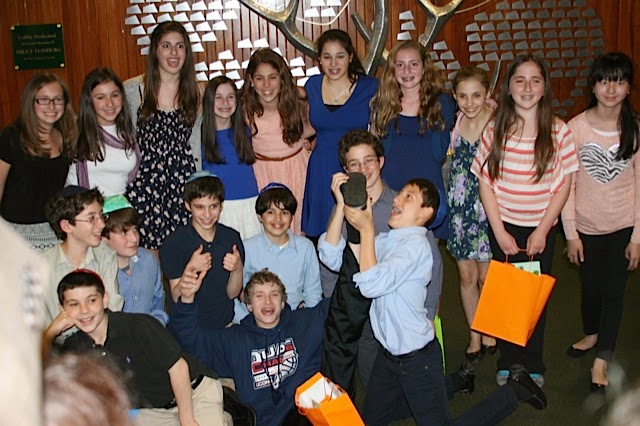 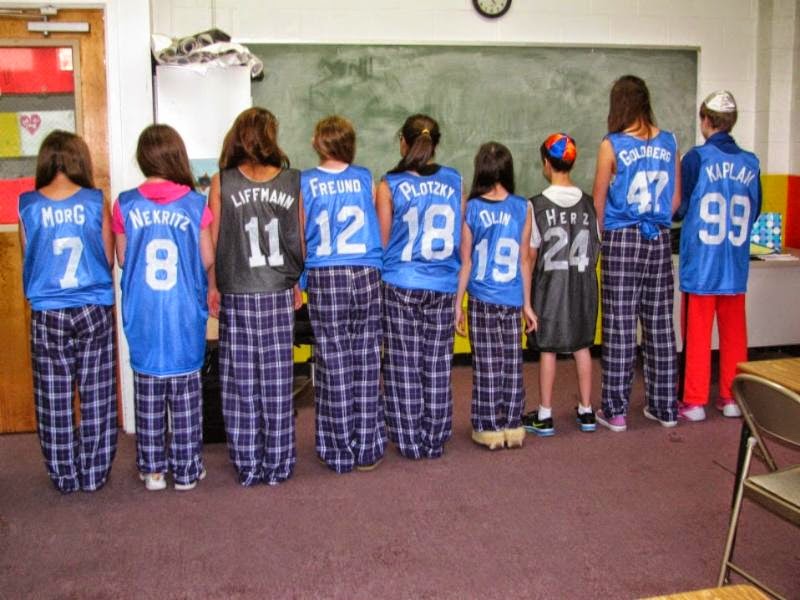 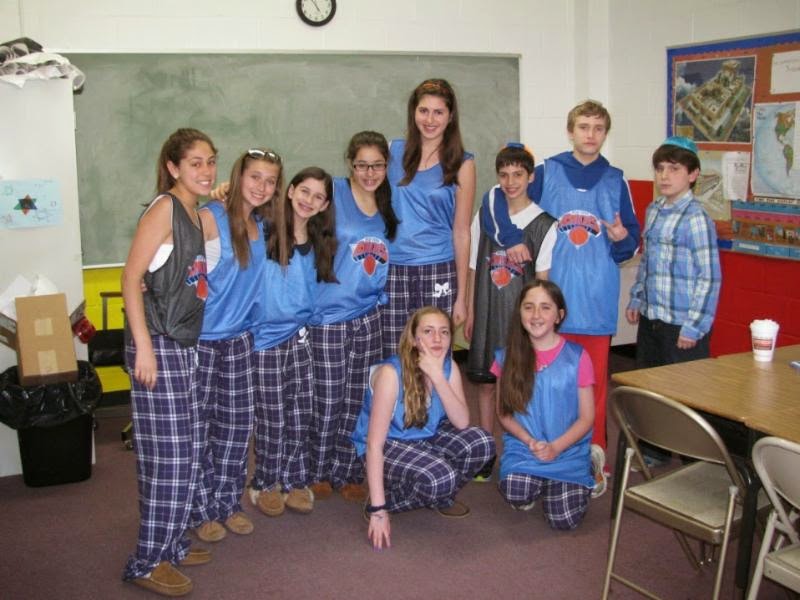 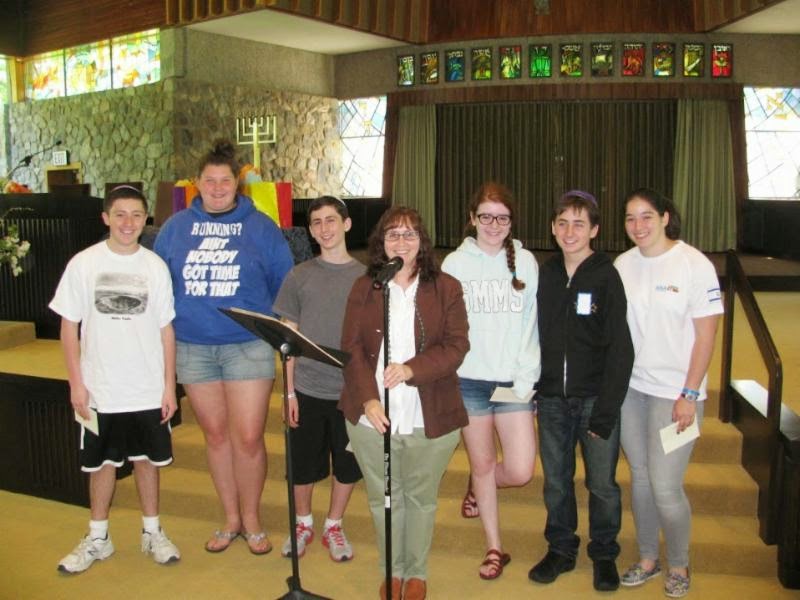 Some of our all-star lineup of teen Madrichim 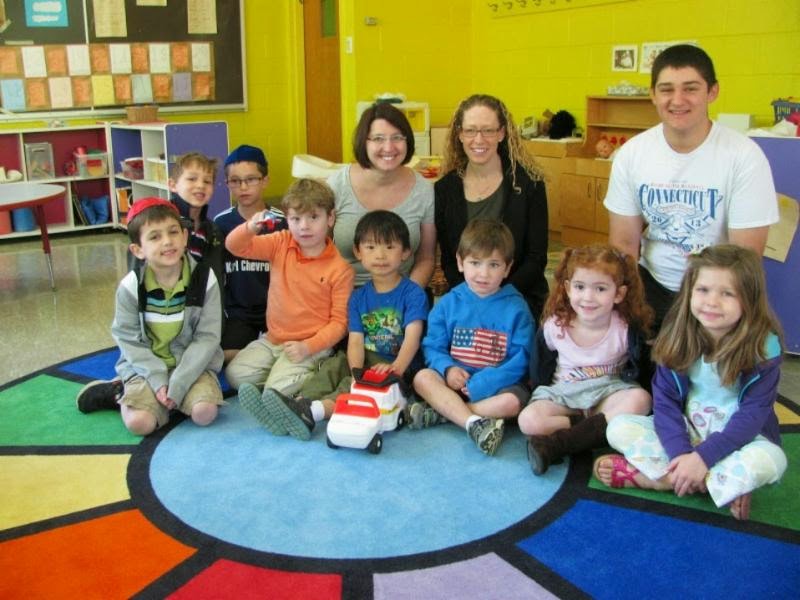 All smiles for some of our younger Beth El'ers 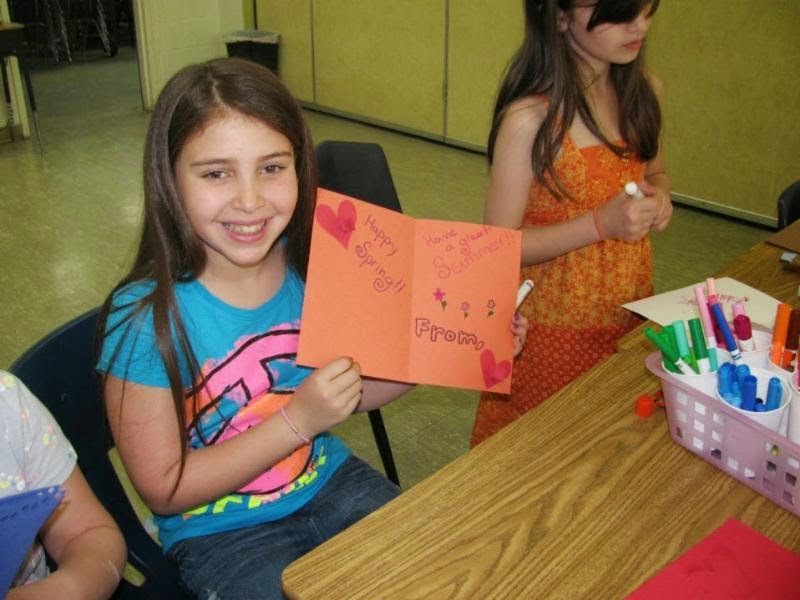 Mitzvah projects spiced up the final day
Some students sent cards, cookies and plants to residents of the Jewish Home

I am a retired professional woman, former congregant, looking for a furnished room for a month, June, 2014 in an area closer to downtown Stamford than to the Merritt or North Stamford but will consider all possibilities.  I can be reached until May 28 at 215-925-1607 or 203-898-4174 until then and thereafter.

I watched Maccabi Electra Tel Aviv's miraculous Euroleague basketball title on both American and Israeli TV last week, and the Israeli version was much more fun.  (see English highlights of the thrilling semi final win over CSKA Moscow  and highlights of the final against Real Madrid, won in overtime. Then watch the Hebrew version of the semis.) It was a storybook run.

Israel went gaga after the victory.  Understand that this team was considered a mediocre shadow of its former glory.  In Israel they had struggled mightily, losing to teams like Nes Tziona, (imagine the Miami Heat losing to the Miami Hurricanes).  Their coach, who was nearly fired a year ago, except that the team could not afford to pay the severance plus hire another coach, is now a national hero.  They overcame a dozen point deficit with a couple of minutes to go in a qualifying game just to get into the final four; and against Moscow they were down by as many as 15 points well into the second half.  They have no superstars and most of their players cannot understand Israel's national anthem.  This is not a national team, but a private club built primarily from NBA wannabees.

Yet here they were, celebrating on the court and the whole country was wearing Maccabi yellow, even those who ordinarily are bitter rivals of the team. President Peres and PM Netanyahu raced to call the coach right after the game.  Every other news story took a back seat as the team flew home and stopped in to visit the Prime Minister on the way to the big celebration.

The adulation got to the point where even the ultra-Orthodox took notice, one of themlabeling Maccabi as a modern day "Golden Calf." "They made basketball and soccer a symbol of national pride instead of our rich Jewish culture," he said. "The team is imported from around the world. They are not Jews, but Israelis don't care as long as they win." Another, Aryeh Deri, attributed the victory to the "Jewish brain."

A slew of anti-Semitic tweets greeted the victors, as if to highlight the veracity of the ADL's recent survey.  This despite the fact that so many of the players are not Jewish. But this week it didn't matter.  On some level it normalized Israel, to be able to win on a major international stage. And at the same time, it played into the narrative of the resilience of the Jewish people and the Israeli nation.  Nes Gadol Haya Sham.  Not only did we win, but we won spectacularly, avenging the Spanish Inquisition and the Russian pogroms in one fell swoop.  Take that, Torquemada!  Take that, Czar Nicholas!  I wonder if Vladimir Putin was watching.  This was an exercise in Jewish power and Israeli pride, albeit perpetuated by non Israeli, non Jewish players.

Whatever it was, it felt good and Israelis felt unity and pride - a lot more unity than they will likely feel this week on Jerusalem Day, which has become nearly exclusively a right wing celebration, or when the Pope slips into town for a quick visit this weekend.

Abe Foxman of the ADL slipped into Stamford this week, speaking as part of a continuing series held at the Ferguson library called "Civility in America."  I went to the lecture "Civility in Politics and Public Life: A Current Challenge," expecting to hear a vintage Foxman regaling on his wide ranging areas of expertise.  What would it be?  Iran's nuclear program?  White supremacists?  Bullying in schools?  The ADL's recent bombshell worldwide survey on anti-Semitism?  His own retirement, which was announced recently, setting off a feeding frenzy of rumor as to whom his successor will be?

Amazingly, Foxman spoke about none of the above.  He spoke about - get this - civility in America! (Read Advocate coverage here)

Reading from notes, he lectured for 45 minutes on the impact of the internet, the scourge of anonymity and our polarized political system on the stunning lack of civility in this country.  He spiced it up with personal anecdotes about a commencement address he recently delivered and his reaching out to a Palestinian student who had asked him not to come.  It was very moving.

Toward the end, Foxman asked and answered a key question: Why had he accepted this particular speaking engagement? The answer: No one had ever asked him to speak on this subject before.  It was hard for me to believe that the head of the ADL had never been asked to speak on civil discourse before - but he then went on to say that to his knowledge, no community other than ours is hosting such a series.

So kudos to Stamford and our series on civility.  May our community continue to be a shining example in the art of getting along.

A Billion People Hate Me - Do I Hate Myself?

So, what of the ADL's landmark survey?  I'm still digesting it, but I promise, over the coming weeks, we'll have a chance to discuss it.  So in the meantime, take a look at it and let me know your impressions.

One stat that jumps out at me: According to the survey, there are over 1 billion anti-Semites in the world (a lot, but still less than the number of McDonalds hamburgers served).  Fully 27% of people who have never met a Jew nevertheless do not like us.  Shockingly, 77%, of those who hate Jews have never met one. The survey also found an inverse relationship between the number of Jews in a country and the spread of anti-Semitic attitudes there.  As a general rule, the fewer the Jews in a particular country, the more numerous the anti-Semites. There are exceptions to that, especially in Southeast Asia, where they seem to like us a lot.

So it's time to take your non Jewish neighbors out to lunch. To know us is to love us - or at least to hate us a lot less.  (Read: Hating the Jew you've never met | The Times of Israel.)

The first thing we have to do to slowly begin to improve those staggering numbers? Rent a villa in far, far off Papua New Guinea.  And fly Donald Sterling there.  There was a point where we could accuse the media of making too much of Sterling's Jewish background.  But then Sterling went on  Anderson Cooper's show.  Really.  Donald.  Stop. Dragging us all into this.

The second thing we need to do to reduce anti-Semitism: keep rabbis off the front pages.  In the wake of a number of rabbis-gone-wild scandals these past few weeks, includingextortion and kidnapping charges on an Orthodox rabbi involving a recalcitrant husband, and then the scandal involving a Boston area Conservative rabbi that seems to get more sordid every day.  It is terrifying to read about these things, because they engender an atmosphere conducive to an increase in anti-Semitism and to the erosion of trust between Jews and their leaders.  These accusations, if true, especially involving a long time, trusted rabbi, bring shame to all rabbis and to all Jews.

It's enough to make a Jew anti-Semitic.

Andrew Silow-Caroll writes in today's Times of Israel that there are parts of the ADL survey that he himself would not have "passed" - and he edits a prominent Jewish newspaper.   He lists the questions.  See how you might have scored.  I'll bet there are more anti-Semitic Jews than we ever could have imagined.  Or, perhaps the ADL survey, in its desire to create headlines, bit off more than it could chew. Perhaps simply thinking Jews have a dual loyalty to America and Israel does not make one anti-Semitic.