I'm very happy to hear this morning that the FBI has made an arrest in the case of the over 190 anti-Semitic events over the past six weeks. The suspect is Juan Thompson of St. Louis. Let's hope this marks the beginning of the end of this wave, which also includes three pogrom-like desecrations of Jewish cemeteries, the most recent in Philadelphia (where hundreds rallied against hate crimes) and Rochester, NY. Undoubtedly more perpetrators are out there, but this is a promising arrest.

Heritage Tour Deadline
Today is the last day to sign up for this summer's Jewish Heritage Tour of Central Europe before the deadline.  I'm pleased to say that right now we have about twenty people set to go with us to Poland, Budapest, Prague and Berlin this summer.  There still may be room for others, so by all means, let me know if you are interested - or go to the site today and make your reservation!

Another Shabbat Across the Bow
This evening is "Shabbat Across Stamford" and once again, we will be the only community in North America where congregations across the denominational spectrum will come together to share Shabbat.  We will not have services here this evening.  Even if you have not signed up for the dinner, you can join us for services at the Stamford Athletic Club, 75 Third St. at 5:15 PM. Two years ago, I wrote about how this coming together was in fact a "Shabbat Across the Bow" in the uphill struggle to truly embrace diversity, even within our own community. Thank you to the UJF for its leadership, and to the National Jewish Outreach Program (NJOP) for leading the way.

I'm pleased to announce that we have also received a grant from NJOP to assist us in our second night Congregational Seder, along with a grant from the Mann Family Foundation.  Click here for information and to reserve for that Seder.

A Revitalized Men's Club - A Revitalized Judaism
Tomorrow morning is Men's Club Shabbat, something we haven't done in several years.  Thank you to our revitalized men's club for putting this together, and to our speaker, Rabbi David Markus, co-chair of Aleph: Alliance for Jewish Renewal.  We are part of the Aleph Network, a leading force in reinventing Judaism for a new generation.

Also note that Rabbi Markus will be teaching a four part series on Jewish spirituality, beginning THIS COMING WEDNESDAY, with a session entitled, "Illness and Healing in Jewish Spiritual Tradition." See the full listing of upcoming classes in this series.  Our Scholars Series is free to the public and sponsored by Michael Horowitz in loving memory of Penny Horowitz, Bessie Silver and Millie Reiss.

And on Sunday, our Weekend of Jewish Renewal continues on Sunday at 10 AM, with a men's club-sponsored brunch with Rabbi Mike Uram, executive director and campus rabbi at the University of Pennsylvania, who will discuss his recently published and highly acclaimed book, Next Generation Judaism. The book just received a 2016 National Jewish Book Award.

BTW, if you are looking for a high-level ongoing conversation about how Judaism is changing and revitalizing, check out the Judaism Unbound podcast and website.
Another example of Jewish revitalization is the National Day of Unplugging (NDU) tonight, and will last for a full 24-hours of disconnected bliss. It's the biggest NDU yet, and that means making sure that you have everything you need for a meaningful experience. We've got some great resources that will help keep things fun and fresh as you prepare to unplug.
We're revitalizing Judaism here in other ways as well.  Also on Shabbat morning we have another day of Shabbat School for our Hebrew School students (and our day school students are welcome to join us!), with special guest JCC emissary Yael Stolarsky, and another fantastic Shabbabimbam for young families, at 11 AM.  Then we all join together for lunch!  Next Friday, Shabbabimbam expands to a Pre-Purim Tot Shabbat and BYO Vegetarian Dinner. click here for more info and to sign up.
Oh, and next weekend is Purim, which means, of course, our always great carnival and this year, on Sat., night, our first-ever "Big Megilla Bat Mitzvah."  More on that next week!

A Rabbi, Imam and a Minister Walk Into a... 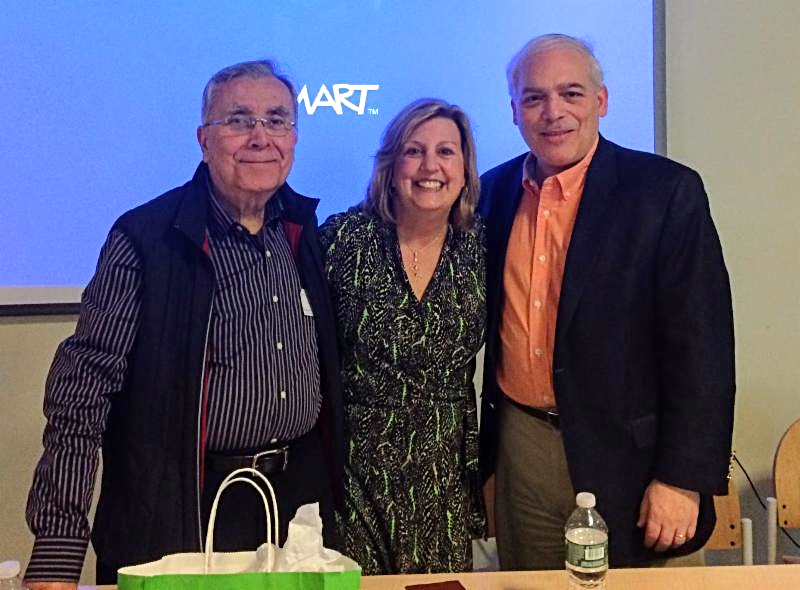 Mark your calendars for Friday, March 17, when we'll be joined by my friends, Imam and Dr. Kareem Adeeb and Reverent Shannon White, for a lively conversation, "Muslims Christians and Jews: Forging a Common Path."  We appeared together yesterday before over 100 students at Greenwich High School, and I came away feeling that we had done something very important, given today's climate.  Also save the date of March 31, when we will be visited by the Israeli Consul General for our region, Yehuda Yaakov, who will speak at services about Israel today.
News About News from Israel
I can recall a time not so long ago when I would clamor for news, unfiltered and direct from Israel.  I would schlep down to the Kosher butcher (remember when we had those?) on Fridays for a copy of the weekend edition of the Jerusalem Post or fiddle with my shortwave dial to pick up Kol Yisrael.  Now we have an embarrassment of riches.  Of course we have the internet, and sites like JPost and Haaretz.  But if you have Cablevision, you now have three terrific options on TV.  There's JBS (formally Shalom TV) on channel 138, there is the Israeli Network on 1118 - with English subtitles on Israel's highest rated news broadcasts. And now, go to channel 102 and you will find something very exciting and new.

Israel's version of 24 hour cable news, in English, has come to American TV - it's called i24.  It's been available online for a while, but just last month, a brand new American version of i24 came to Optimum.  While it now has more of an American focus, it still covers Israel and the Middle East extensively.  I find it to be much more balanced than other cable news, both in how it treats Israel and America, while at the same time focusing much more on international news than American cable news networks.  Give it a try!

I turned 60 two weeks ago. No drum roll, please.  I celebrated quietly, with my family, not feeling a need to throw myself a big bash - but neither did I feel compelled to hide under a rock (at least because of the birthday).  The Patriots gave me all the birthday present I could ever want.

Aging became a tangentially hot topic this week, in the wake of Oscar's Very Interesting Evening.  In his opening monologue, Jimmy Kimmel became eerily prophetic when he quipped, "In Hollywood, we don't discriminate against people based on what countries they come from. We discriminate on them based on their age and weight."

Sure enough, age became a prime issue when 79 year old Warren Beatty and 77 year old Faye Dunaway fumbled their way through the "Best Picture" announcement, ultimately and incorrectly announcing that "La La Land" had won.  Of course the true guilty party was the much younger PWC accountant who gave Beatty the wrong envelope, but still there was plenty of age-based derision directed to the pair of presenters, who looked so lost and confused up there.
It reminded me of the touching film, "On Golden Pond," which featured an elderly Henry Fonda as the curmudgeonly Norman Thayer and his wife Ethel, played by Katherine Hepburn, who won as best actress for that part.  It's possibly Hollywood's most touching film dealing with the frustrations of aging and facing one's mortality.  Norman turns 80 in the film and has trouble accepting it, especially after one climactic scene where he becomes disoriented while on his boat, riding on a pond that for so long had been his home, his anchor.  I found Beatty's visible confusion equally touching.  Jimmy Kimmel later said that Beatty and Dunaway needed extra rehearsal time because they couldn't read the teleprompter. I'm sure some producer of the telecast was wondering whether it might be better to screen award presenters for signs of dementia.
Let's get this straight.  79 is not old.  80 is not old.  Teleprompters are hard to read with bright spotlights shining in your eyes.  And when you are handed the wrong envelope at the Oscars, anyone would be confused.
But Oscar's Golden Pond-like gaffe has a message to teach us, not about aging per se, but about being human and vulnerable.  Last week, all the Hollywooders thought it was so cute to bring in a busload of "real people," tourists, who got the surprise of their lives.  When Kimmel asked one who her favorite star is and she pointed to Denzel Washington and said "that one," it was the most moving, unscripted, human moment of the entire night.  Until Beatty squinted into the lights.
In the end, the stars were the ones who had to go off script.  In the end, they became the real people. In the end, there was no difference between them and those tourists.  In the end, the sex god from "Shampoo" and the scheming ice-queen from "Network" became just good old Norman and Ethel Thayer from Golden Pond, aging and raging against the dying of the light, just like the rest of us.

In this week's portion of Terumah, the book of Exodus tells us that the ark located in the sanctuary in the wilderness, which housed the Ten Commandments, was lined with gold both inside and out.  The rabbis easily understood why it should look nice on the outside.  But why the inside as well?  The response (from the Babylonian Talmud, Yoma 27) is that we all should be the same, and as ethically pure, on the "inside" as we are in public.  It's a great lesson on the evils of hypocrisy, but it also has a slightly different meaning for us in the wake of Oscar's Golden Gaffe.

What glowed from Ethel, Norman, Warren and Faye, was an inner beauty that glitters every bit as much as what is on the outside.  Last week, the Oscars ended in a moment that was entirely Botox-free.  The statuette was given to honor a film, "Moonlight" that was so totally about real people that they forgot to hire any megastars to act in it.
The ark was lined in gold on the inside.  And so are we.  Last week's supposed fiasco was really a celebration of the intrinsic value of being human that does not dissipate over time, even - no, particularly - as we age.