Tonight, in honor of Adar - it's "Jewish Joke Night" (see below)

March is coming in like a lion here at TBE. Tonight is Shabbat Across America for hundreds of communities across the US and Canada, and we are proud to be one of them. For the past few years we've done this event with the whole Stamford Jewish community; this year we are back to doing it on our own and I'm looking forward to sharing this opportunity for coming together, at the dinner, the family service before and the main service after. Something for everyone! Then, on Shabbat morning, we have Men's Club Shabbat with a special speaker, along with our new service for 4-8 year olds. Also, Mazal Tov to Paul Springer and Amy Levinger on their Ufruf - and thank you to Fred and Eileen Springer for joining with the Men's Club to sponsor our Kiddush lunch.  The Men's Club Shabbat will take place, snow or shine!

An Earthquake in Israeli Politics 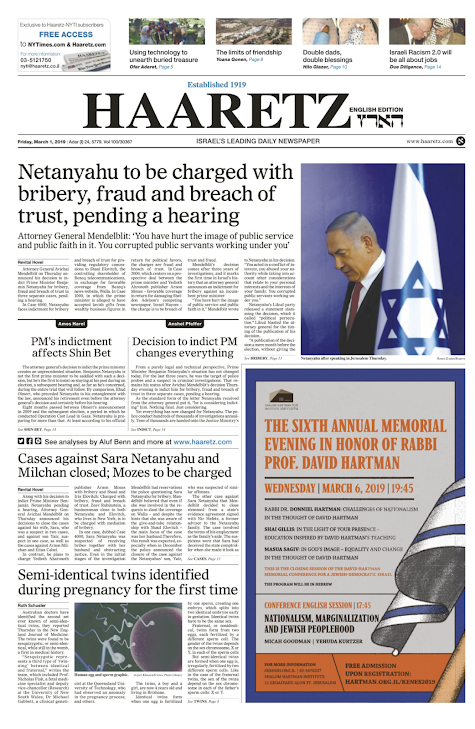 Over the past week some earthshaking events have upended the Israeli political scene and the relationship between Israel and American Jews as well. In last week's Shabbat-O-Gram I spoke about the grave concerns posed by the inclusion of a party consisting of racist followers of Meir Kahane into the potential Netanyahu led right wing coalition, at the Prime Minister's behest. I am pleased that this unprecedented move was met by an unprecedented response - a rebuke by American Jewish organizations across the board, including the AJC, whose comments were echoed by AIPAC leadership.

Yesterday, the Prime Minister was indicted (pending a hearing), which was not a huge surprise, but an enormous shock to the system. It's not often that a Prime Minister gets indicted - and during an election campaign, yet. The next several weeks will be riveting, as Netanyahu fights for his political life. Here's an analysis of the current situation by the Times of Israel's David Horovitz. Below you'll find a chart explaining the accusations, from Ha'aretz.

So what happens when we have two Adars, as we do in a Jewish leap year, which this year happens to be? (For you math whizzes out there, see how the Jewish calendar and leap years work) Do we get twice the joy?


Good things happen in Adar; there's a positive energy. The Talmud says "Someone who wants a fortune should plant in Adar." Do you hear that, investors? Also, if a Jew needs to go to court, the rabbis state, go in Adar. Tradition has it that Moses was born and died in Adar, and of course, the Jewish people hit the jackpot with their victory of the arch enemy Haman on Purim, which is in Adar.

Given that we should be doubly joyous this week, and given that we need a little Purim, right this very minute, I thought I would revive an old TBE custom on Friday night and declare it...

Below is are examples of classic Jewish jokes, properly redacted to be in step with the times:

Here's one, Henny Youngman style:
My wife divorced me for religious reasons.
S/he worshiped money and I didn't have any!

How about this all-timer!

Two Jews are walking through a neighborhood one evening when they notice they are being followed by a pair of hoodlums OF NO PARTICULAR RACIAL OR ETHNIC BACKGROUND.
"David," say his friend, "we better get out of here. There are two of them, and we're alone!"
And another, this one redaction-free:

Schwartz, an elderly (LOOKING) man, is resting peacefully on the porch of his small hotel outside Boca (NOT THAT THERE'S ANYTHING WRONG WITH BOCA) when he sees a cloud of dust up the road. He walks out to see who could be approaching: It is a Southern farmer with a wagon (CALLED "SOUTHERN" BECAUSE HE LIVES IN THE SOUTH).

"Good afternoon," says Schwartz.
"Afternoon," says the farmer.
"Where you headed?" asks Schwartz.
"Town."
"What do you have in the wagon?"
"Manure."
"Manure, eh? What do you do with it?"
"I spread it over the fruit."
"Well," says Bernstein, "you should come over here for lunch someday. We use sour cream."

MY APOLOGIES TO THE MANURE ANTI-DEFAMATION LEAGUE FOR THAT ONE!

I'll try to come up with some better ones for tonight. Meanwhile, bring your own faves!
To tide us over, here are some of my favorite Jewish jokes from "The Marvelous Mrs. Maisels." 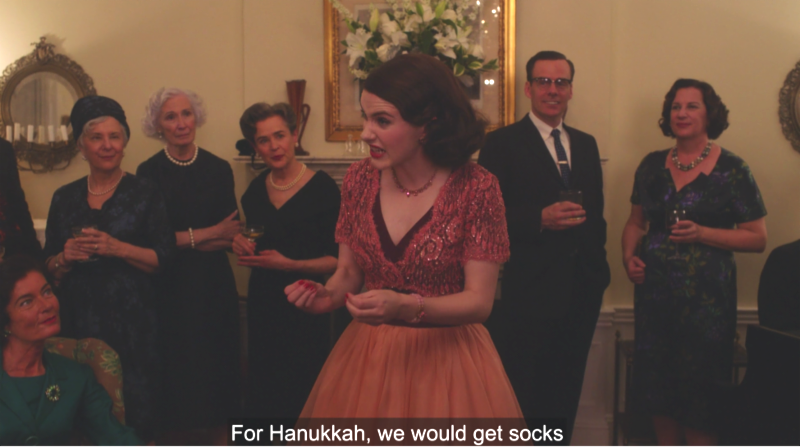 Midge: Me, personally, I was never great at gift-giving. Maybe it's because I never got to celebrate Christmas. I got Hanukkah. Doesn't exactly prepare you the same way. For Christmas, a gentile would get a bike as a reminder that their parents love them. For Hanukkah, we would get socks as a reminder that we were persecuted. 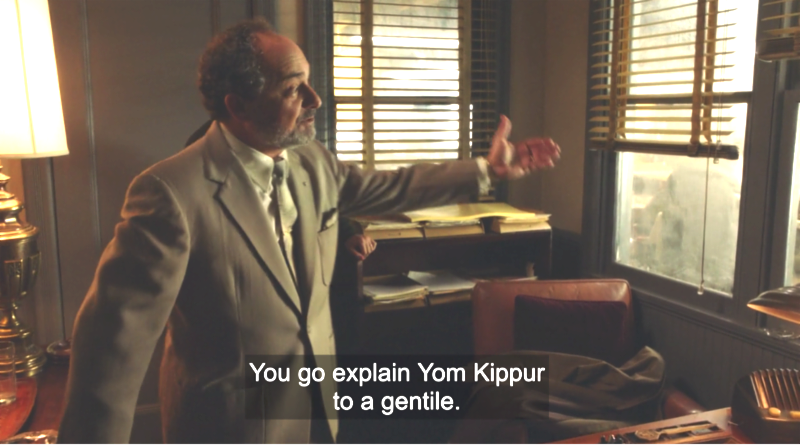 Moishe: Your mother-in-law called and said the whole family is so ill that break fast is canceled. So ill, the holiest of holy days cannot happen.
Joel: If it's so holy, why do you keep the factory open?
Moishe: You want a smack in the face?
Joel: I'm just saying-
Moishe: The people get paid by the piece. You want to take a day's work away from them? God wants them to go hungry if I shut my doors?
Joel: Fine
Moishe [gestures to work floor]: Half those people out there are gentiles. You go explain Yom Kippur to gentiles. We're happy, but we're starving. It's New Years, but we're guilty.
Joel: Sounding like a nonbeliever, Pop. 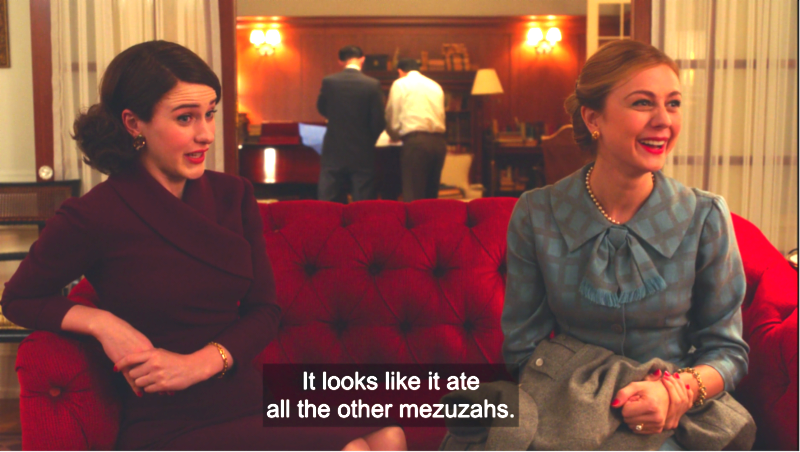 Astrid: Here. This is for you.
Rose: Honestly, Astrid, you don't have to bring us gifts every time you go to Israel.
Midge: What was this - your sixth, seventh trip?
Astrid: 11th!
Midge: Oh.
Astrid: Can't get enough of the holy land.
[Rose opens bag and pauses]
Rose: What a beautiful mezuzah.
Astrid: I've never seen one that big before. [laughs]
Midge: It looks like it ate all the other mezuzahs.

A Contemplation for Non-Believers

At last week's Shabbat-in-the-Round, I read a passage that resonated with a number of people, so i'm sharing it here:  "A Contemplation for Non-Believers," from Siddur Shaar Zahav.  Feel free to incorporate it into your own prayers (or non-prayers!).  We at TBE encourage all kinds of questioning. 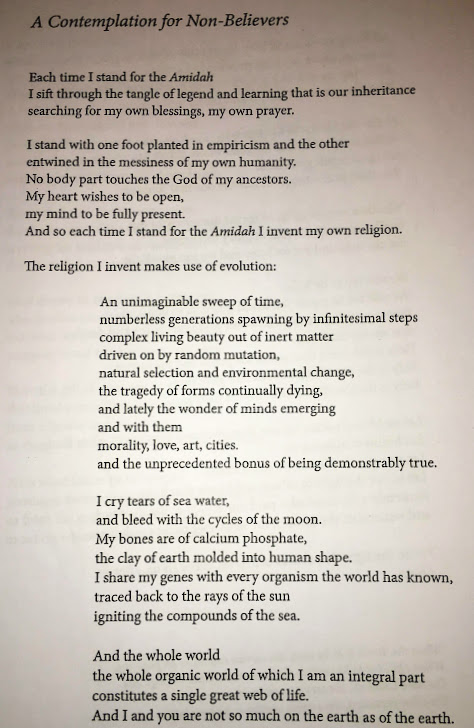 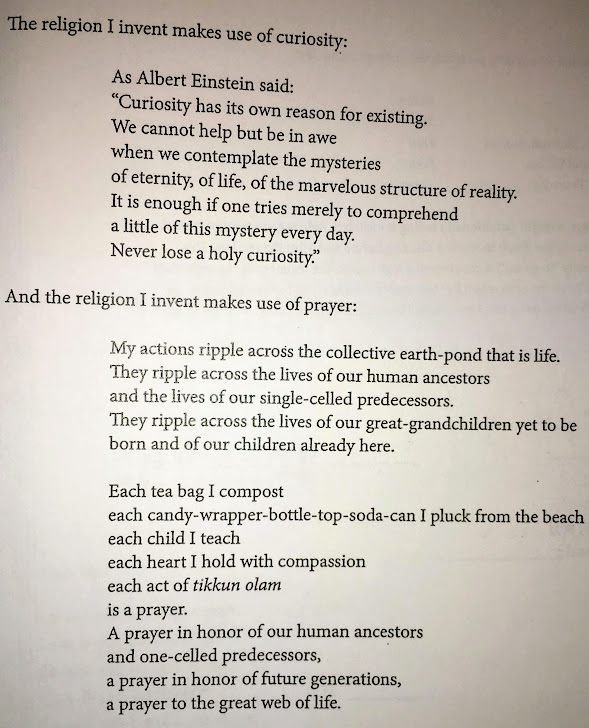 Finally, for our college students and other young adults: