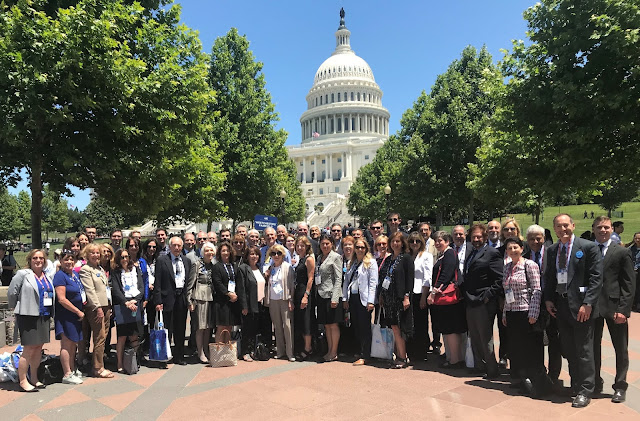 Members of the Westchester-Fairfield delegation at the AJC Global Forum, June 2-4


Click here to watch videos of many speakers and sessions


I return each year from AJC Global Forum more educated, inspired and challenged to speak out and get involved.

Stephne is being installed as president of the Westchester-Fairfield region on AJC here at Beth El next Wednesday evening.

BARBARA FRIEDMAN
For me, there were many conference elements that stood out.

Sunday evening - Community of Conscience.
• Dr. Kurt Graham’s recollections of the big role that President Harry Truman had in fighting for civil rights. I personally was not aware of this.
• reading of the statements contained in the Community of Conscience declaration - by representatives of so many faiths - indicating agreement by all.
• David Harris’ amazing speech - summarizing the statements and imploring the attendees to remember the golden rule as they approach the world’s problems and seek solutions.
(The whole program was beautiful - and it would have been amazing if we had been able to stand together at the Lincoln Memorial.) Also - • the announcement by members of the House of Representatives of the establishment of a Jewish/Black caucus.
• the presentation by former mayor of New Orleans Mitch Landrieu - sharing his pathway to deciding to take down statues in New Orleans.
********If I have to pick one thing - it is definitely David Harris’ speech. It set the tone for the rest of the conference.  He definitely has a way with words!!


It would be great if his speech could be shared with everyone.


KERRIN BEHREND
I attended a luncheon involving a discussion between David Harris and Ron Dermer, Israel's Ambassador to the USA, where Ron gave an impassioned presentation about Israel's rise to be considered as a global power, particularly in the areas of technology and cybersecurity.  He showed how this has led to significantly enhanced relations with the community of nations, and predicted that one would begin to see a shift in the voting patterns on Israel-related resolutions in the UN.

STAN FRIEDMAN
If AJC's objective at its 2019 Global Forum was to underscore the essential role it plays in advocating on issues facing world Jewry and Israel, and in promoting democratic values for all, it could not have done any better. The speakers and discussions were simply outstanding. But it was when seven Jews representing "Faces of the Diaspora," each walked on stage during the 2½-day program and related their individual stories in TED-like talks, that your pride as a Jew and your desire to fight against bigotry and anti-Semitism knew no bounds.


SARI JAFFE
The AJC Global Forum was a very impressive gathering.  The breadth of speakers was remarkable.  The audio-visual presentations were extremely well done.

My favorite session was the Max Fischer Annual Memorial Lecture given by Dr. Steven Bayme, the AJC Director of Jewish Life.  He gave us a succinct history of anti-Semitism in the United States dating back to Peter Stuyvesant in 1654. I learned about anti-Semitic incidents in this country that I had never heard about, such as Jewish involvement in the white slave trade in the late 1800's which unleashed a tremendous amount of anti-Semitism and limitations on the amount of immigrants from Eastern Europe and Russia.

The most interesting parts of his lecture for me  were: 1. His explanation of FDR's hesitation to get the United States involved in WW II.  While he praised his leadership in bringing the country out of its isolationist position, he also criticized FDR for his failure to order the bombing of the concentration camps. 2. He explained how Jews entered a different era of acceptance in American society in the aftermath of WW II. Around 600,000 Jewish soldiers fought in WW II.  There were no specifically anti-Semitic reactions relating to the Rosenbergs' conviction and execution as Soviet spies, the killing spree of Son of Sam (Berkowitz), and other such Jewish related incidents in the post-war era. 3. His view of the current state of anti-Semitism in the USA.  We are now in different times as Jews. I wish I had taken notes!

Dr. Bayme spoke in our synagogue on the 100th anniversary of the signing of the Balfour Declaration and he will be speaking at Temple Beth El again on June 12, the evening of Stephne's installation as Chairman of the AJC Weschester/Fairfield section.


SUZANNE STONE
Below are some of my bullet points:

Key to AJC's success is building relationships. It's leadership and membership spend the majority of their time meeting with leaders and ambassadors of countries throughout the world. During these meetings they educate and advocate for Israel and Diaspora Jews.

Joan Ryan Member of GB's Parliament said "not only know what you are against but know what you are for". (Yale President Peter Salovey also said it, taking the words from the Commencement address by Kingman Brewster Jr. in 1978.).

In the past "Might makes Right" was rejected but today's youth think that "Might makes Wrong". One reason that American youth support Palestinians.

Reform and Conservative Judaism in Israel referred to as Rising Streams

Secular Israeli's care about security and the economy not whether women can pray at the Kotel etc.

Palestinians will not be given unlimited sovereignty. They can decide issues that effect them but only Israeli's can decide their issues of security etc.

US is Israel's most important ally.

Israel is a leader in security and technology.

Israel should lead and help secure the safety of all Jews and address antisemitism.

Iran brought Israel and its Arab neighbors together. It is a new Middle East today.

A young Jewish boy (I don't remember his name) growing up in Burma (Myanmar) complained to his father that there were hundreds  of Muslims and thousands of Buddhists but only a few Jews  (20). His father responded that it is not our numbers but our commitment that matters. After living and studying in the US he says that he feels more Jewish in Burma than NYC. If he doesn't attend Shabbat services no one knows but in Burma who will unlock the doors and open the gates etc. if he is not there.

ALAN JAFFE
I enjoyed the Forum, especially the session "Anti-Semitism in America Historically Considered, which was presented by Dr. Steven Bayme.  While I was somewhat familiar with each of the incidents of Anti-Semitism that Dr. Bayme discussed, I found that he gave details regarding each of them that I was not previously aware of, which made his presentation very insightful.  He was an excellent speaker with respect to both content and style.

JERRY SILBER
Some highlights are:

SUSAN FRIEDEN
I really enjoyed  the conference . I would recommend this to anybody who wants to learn what is happening in the US and globally regarding Israel and antisemitism . It is hard to pick just one thing to write about- I learned so much! ( it could be that I live under a rock). I did walk away with a renewed feeling that it is up to all of us to continue to work together to combat antisemitism as well as other racial biases.

I really enjoyed  Ambassador Nicholos Burns, Professor at Harvard Kennedy School  who discussed our transatlantic relationships.,though it was quite depressing  as he confirmed my fears of weakened relationships with our allies .In addition I have now become a committed fan of Rep. Hakeem Jeffries and wish he was in my congressional  district!

BETH LEVICK
As an AJC staff member and member of TBE I felt like I was wearing three hats at Global Forum - third being that of a participant. I enjoyed seeing the conference through these three lenses - hearing people’s reactions to speakers they agreed with and those they didn’t, learning even more about the current state - good and bad - of the world, and meeting new people from all over the world, including TBE members. One highlight for me was listening to Bernice King, MLK’s daughter, during our Community of Conscience event. The weather kept us from gathering at the Lincoln memorial - the intended venue. However, with the image of the memorial behind her Dr King spoke passionately and echoed the words of her father. She stated “Love is the only answer to mankind’s problems.”  I can only imagine how much more powerful it would have been if we were at the memorial.


NORMAN STONE
In a world where the seeds of hatred, bigotry and antisemitism have taken root and sprouted across the world, AJC has proved to be a worthy champion in a never-ending struggle against evil. The speakers at their annual convention presented convincing arguments and ways of combating the poisonous effects of BDS, physical assaults on Jews, bigotry and  the hatred that has increased in recent years. There were many highlights but a few in particular resonated with me. David Harris, CEO, was articulate in explaining AJC’s role and its accomplishments. Fighting for the right of Israel to exist by forming relationships with world leaders, speaking to congressional representatives and senators about AJC’s agenda and attaining more visibility through its volunteers. One of the most important activities is our programs on college campuses. Many of them are hotbeds of antisemitism and the need to counteract their misinformation is of paramount importance.

Individually, as Jews, we support Israel, but when we join together with with other like-minded organizations our voices are heard and acted upon.