Mary and David Harrison in honor of their son,
Nathaniel, becoming a Bar Mitzvah 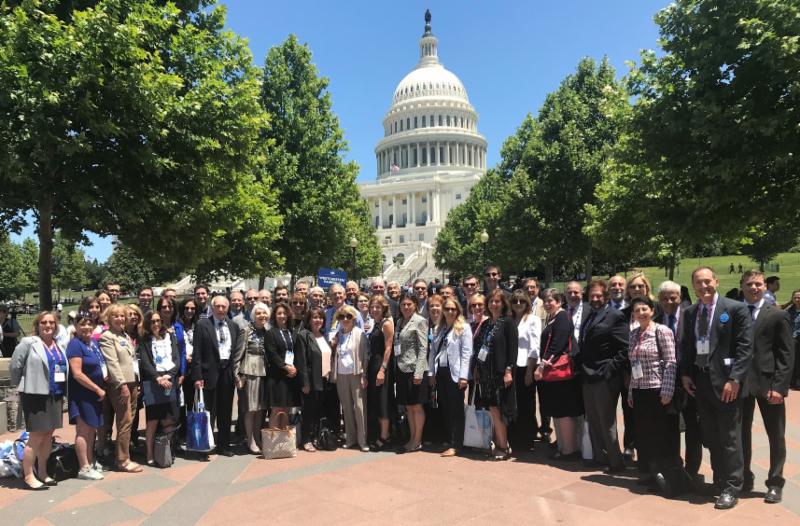 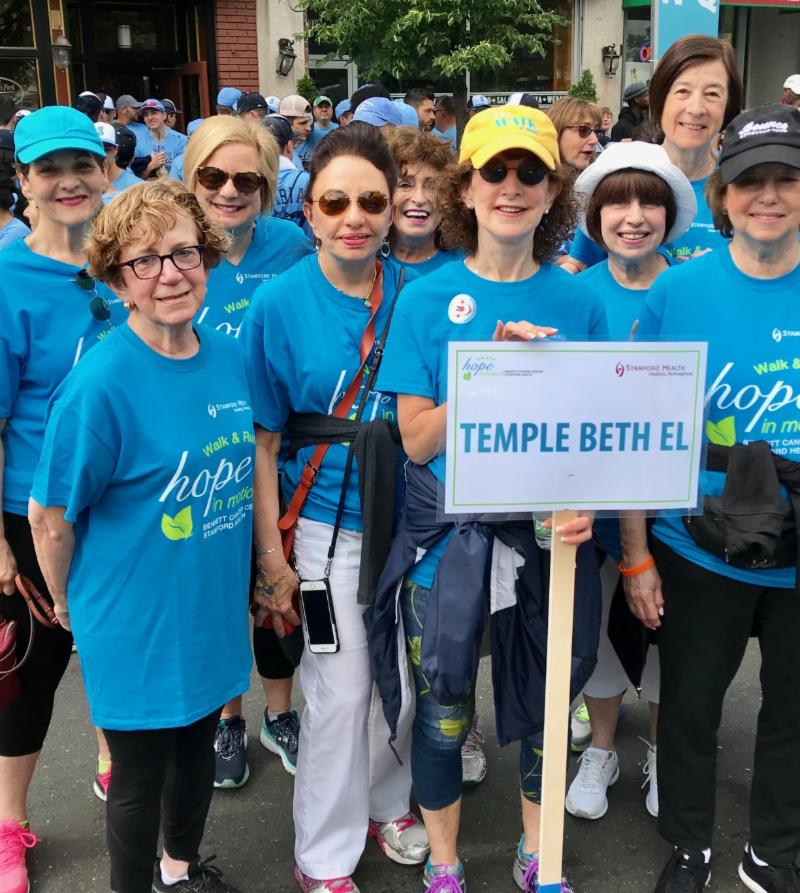 TBE set "hope in motion" this week on behalf of Bennett Cancer Center.

So much happening this week!  Join us for Kabbalat Shabbat on Friday evening, and Sisterhood Shabbat on Sat. morning. Then comes Shavuot, with services, blintzes, cheesecake and other goodies on Sunday and Monday mornings.  On Saturday evening at 8:00 PM we'll join with Temple Sinai (here) to welcome the festival with a Tikkun Leyl Shavuot - a session of study, meditation and song.  The cantors and rabbis of the two congregations will lead a conversation on Cultivating Kindness.   As we focus on the middot (Divine Ethical Qualities) of patience, equanimity, fear and humility; nurturing the better angels of our nature, we'll join hands with our neighbors. Cheesecake included!

For a sneak preview, here are three tips to practice equanimity, and here is a practice for when you lose patience.  Interested in cultivating humility? Click here.  And click here for fear.

Then, next week brings the annual Cantor's Concert and the music of Barbra Streisand. This will also give us a chance to say goodbye to Cantor Fishman and her family and to wish them well - we'll also have a chance to do that on Friday, at a wine and cheese reception before services.  And at the concert, we'll also be honoring Sylvan and Honni Pomerantz for their many years of service to our congregation and Jewish community.

Shavuot, was an agricultural holiday in the Torah that later on came to be associated with the giving of the Torah at Sinai.  These days, most Jews are unfamiliar with Shavuot altogether, as it gets the least attention of all Jewish festivals (here's a funny, quick primer, "The Idiots Guide to Shavuot").
For more - see my blog posting: Subversive Shavuot: Our Most Radical Holiday
Also see:


This coming week, we will also be hosting the Annual Meeting of the Westchester / Fairfield region of the AJC, on Tuesday, June 12th at 7:30 p.m., at which TBE congregant Stephne Behrend will be installed as regional president.   Dr. Steven Bayme, Director of AJC's Department of Contemporary Jewish Life and the Koppelman Institute for American Jewish-Israeli Relations. Dr. Bayme will discuss current issues in the wake of the recent - and upcoming - Israeli elections and offer insight about the Trump peace plan. The event is open to the public, with a dessert reception to follow.  Click here to register.

I encourage our congregants to be here that night, to celebrate Stephne's election, to welcome guests from all over Westchester and Fairfield counties to our lovely sanctuary, and to hear Bayme, who is a terrific and knowledgeable speaker.

I joined a number of TBE congregants and the AJC Global Forum this week in Washington and came away duly impressed. I'll share a few reflections at services on Friday night, but many of my thoughts are echoed in the words of others who were there.  I asked those with TBE connections to share their thoughts, and I've collected them here.

Just to give you a sampling:

Click here to see the full reflections of our TBE group

Read about the "Community of Conscience" to combat hate and violent rhetoric.

Click here to access videos of many of the sessions - here are a few of my favorites: 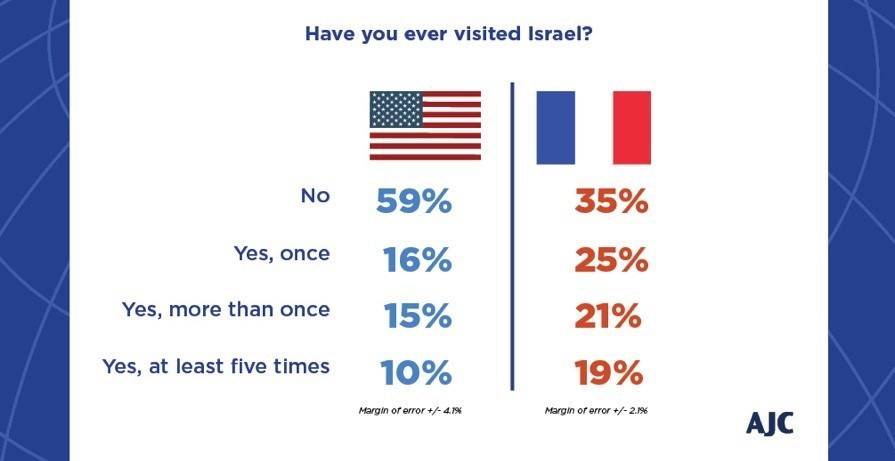 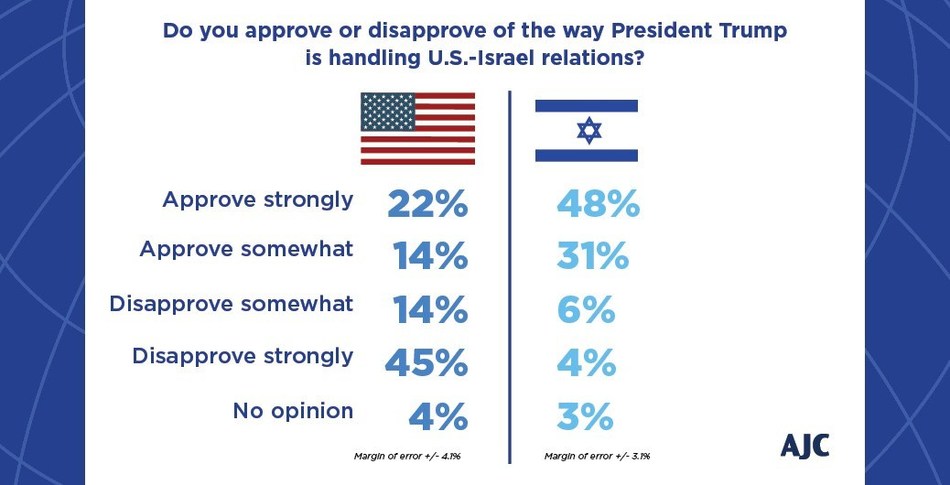 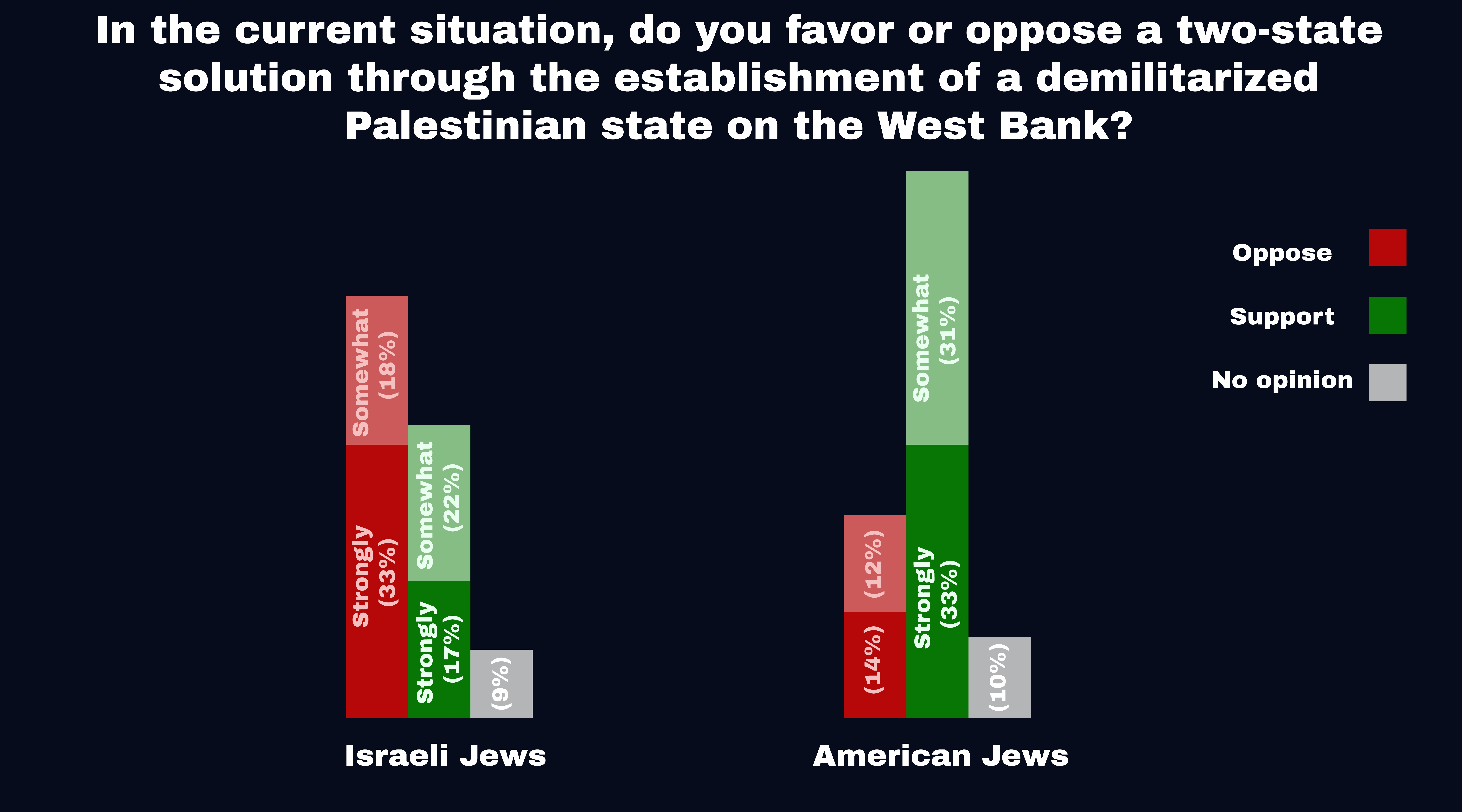 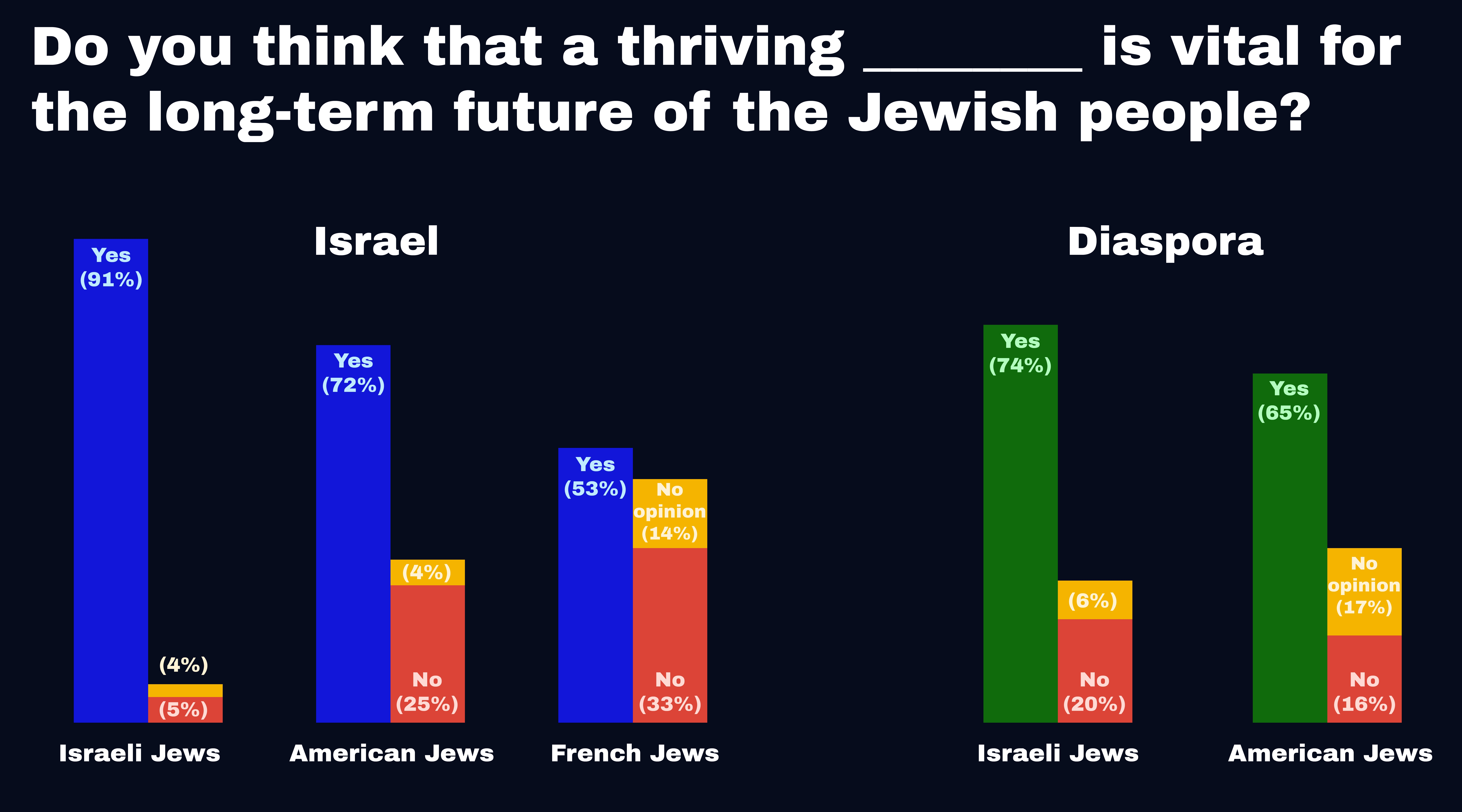 For American Jews, religiosity is positively correlated with a favorable opinion of President Donald Trump. (Data from AJC; Laura E. Adkins for JTA)

Among U.S., French, and Israeli Jews there is large-scale agreement that being Jewish is mostly a matter of ethnicity and culture, with 59% of the American sample, 43% of the French and 51% of the Israelis agreeing. Roughly a quarter of respondents in each country-24% of the Americans, 25% of the French, and 24% of the Israeli-consider Jewish identity a matter of religion. And, 16% of American, 27% of French, and 23% Israeli Jews consider both identity factors equally. The surveys of Israeli and U.S. Jews show, for the second consecutive year, a glaring gap over U.S. President Donald Trump's handling of U.S.-Israel relations, with 79% of Israelis approving (48% "strongly") and just 10% disapproving (4% "strongly"). Only 37% of the Americans approve (22% "strongly") and 59% disapprove (45% "strongly"). In addition, while 50% of American Jews support the Trump administration's recognition of the Golan Heights as Israeli territory, 88% of Israeli Jews do. Overall, the U.S. survey showed a slippage in warmth toward Israel. In May 2018, 70% of American Jews agreed that "caring about Israel is a very important part of my being a Jew." That dropped to 62% this year, with the percentage strongly disagreeing rising from 9% to 15%. 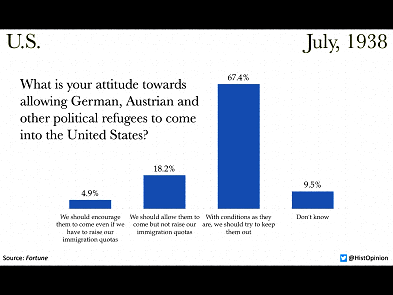 Since I'm sharing important surveys this week, let's look back at a survey from July 1938, when Americans were asked about allowing German, Austrian or other (code word for "Jewish") refugees to come to the United States.  (See it above) It's a little blurry, but the sentiment is clear: ONLY 5 (THAT'S FIVE) percent of Americans were willing to relax the severe restrictions to allow more Jews in.  Two thirds said "Hell no!"

If you look at the full 1938 Fortune survey, you'll find this interesting commentary:   "So much, then, for the hospitality of our melting pot. (Again the Jews make a logical exception-only 18.4 per cent of them are for exclusion of the refugees, and the heaviest weight of their vote is for encouraging them to come here.)"

OK, so in comparison to 67% Americans who wanted the doors barred, 18% is small.  But is it possible that back in 1938, nearly one in five American Jews actually advocated closing the doors to Jewish refugees?  Think about what that means.  ONE FIFTH of American Jews were either too afraid to advocate for the survival of their own extended relatives... or they had severed ties completely with them - and they willingly severed ties with Jewish values too, to the extent that they didn't hear the cry of the not-so-strange stranger. I wonder whether those numbers would have shifted had the question been phrased like this: What is your attitude toward allowing Jewish refugees into the US, given that one third of European Jewry will be annihilated within the next seven years?

The heroine of Shavuot is Ruth, who was a refugee, an undocumented worker, a dreamer whose dreams of a better life were dashed by the death of her husband; yet she refused to leave the side of mother-in-law Naomi while wandering in a strange land; and in that land she was welcomed by her boss, Boaz, who eventually married her (we can leave post #MeToo office etiquette out of this for now), and the two of them became the great grandparents of King David.

See the article "Ruth was a Refugee."