30,000 lies: From Holocaust denial to ‘Camp Auschwitz’ (Times of Israel) 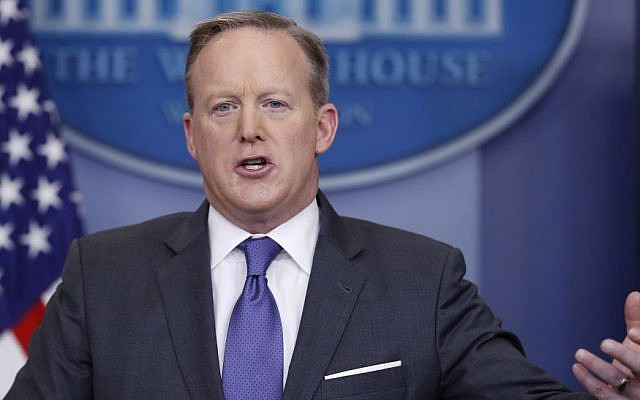 The 30,573 lies began with Holocaust denial.

Just a week after taking office in January of 2017, on International Holocaust Day, the Trump administration chose a symbolic and fitting target for their first major post-inauguration assault on truth (that is, unless you consider the size of the inauguration itself “major”), and it was the Holocaust.

The White House issued what should have been a routine statement commemorating the Shoah, but whether intentionally or not, someone got it very wrong.

“It is with a heavy heart and somber mind that we remember and honor the victims, survivors, heroes of the Holocaust,” the statement read. “It is impossible to fully fathom the depravity and horror inflicted on innocent people by Nazi terror.”

Nice wording…except for the inconvenient omission of a certain people whose name begins with “J.”  Who exactly were these “innocent people?”

Whether or not it was premeditated, what could not be denied was the symbolism and pure cruelty of Press Secretary Sean Spicer’s subsequent clumsy assertions regarding Bashar al-Assad, Hitler and gas, along with his doubling down on an International Holocaust Day statement that was baldly Judenrein.

Spicer said, “We didn’t use chemical weapons in World War II. You know, you had someone as despicable as Hitler who didn’t even sink to using chemical weapons.” And then, after reflecting, he elaborated, saying, “I think when you come to sarin gas, he was not using the gas on his own people the same way that Assad is doing.”

On one level, Spicer had a point in comparing Assad’s actions, in gassing his own citizens, to Hitler’s — but in a manner having nothing to do with gas, and everything to do with the lies and distortions used to cover up the crime. Assad’s and Hitler’s actions were analogous in this way: Assad’s ludicrous claim that the images of suffocating children were staged by child actors was reminiscent of the staged, infamous visit of the Red Cross to Terezin in 1944. The resultant propaganda film of the camp fooled the world into thinking that a notorious concentration camp was the happiest place on earth, filled with tanned, toned, and beautiful vacationers, who were, in fact, actors.

But the Big Lie was allowed to stand.

Trump’s un-retracted lie about the Holocaust, made even before the inauguration bleachers were taken down, was a harbinger of what would follow. Once he was allowed to get away with an act of blatant Holocaust denial, rejecting a free and fair election would become child’s play for him. One Big Lie begets another. Trump’s reign began with a simple act of Holocaust denial, and then, 30,000 lies later, it ended with “Camp Auschwitz” at the Capitol.

The Torah affirms that deliberate deception on a scale such as this is a serious violation of the norms of a civilized society. The rabbinic sages wrote, “There are seven kinds of thieves — the first of them is the one who deceives people.”

At least Spicer later apologized for his outlandish claims, for which he must be given credit. But here is why Sean Spicer’s fumbling, bumbling, pathetic comparison of Assad to Hitler matters, despite the apology. And here is why the Trump administration’s steadfast refusal to follow the Spicer route and issue a similar retraction for its infamous Jew-free Holocaust Day statement also matters.

Holocaust denial is the canary in the coal mine of Orwellian doublethink, the mother of all fake news, in that it not only defies all standards of empirical science and rejects meticulously documented history, which any act of historical denial might do, but, in this case, doing so also attempts to whitewash the greatest moral crime ever perpetrated.

There is, and there never has been, a greater, more bald-faced lie than the denial of the Holocaust. That fact alone warranted an official, immediate and unconditional White House retraction to its Holocaust Day statement.

When the Torah speaks of the command to remember the evil of Amalek, it is speaking to our generation specifically about keeping alive the memory of the Holocaust. But the command to remember Amalek is also a summons to preserve the essence of all objective truth. Holocaust denial is simultaneously an act of both of pure evil and unadulterated falsehood. The Holocaust was objectively, verifiably, utterly — and not alternatively — a fact. That fact is one of the pillars of our epoch, a fundamental truth, and a foundation upon which we are trying to reconstruct a civilized society.

In Judaism, the Big Lie is a Big Sin, and there is no bigger lie than Holocaust denial. The simple act of remembering is an affirmation of honesty and humanity in the face of nihilistic cynicism.

The denial of the Holocaust-truth is a red line that no public figure should ever be allowed to cross. Once that truth is established, we can begin to work some other basic truths. Facts matter. Words matter, especially now, when the rising popularity and enabling of white supremacy is enabling Holocaust denial to an unprecedented degree.  Now, even in the halls of the desecrated Capitol.

The Book of Exodus states that when the Israelites received the Torah they said, “Na’a’seh v’nishma,” often translated as, “We will obediently act and then we will understand.” But the word “na’a’seh” connotes active engagement, not blind obedience. In our age of bots and fake news, a post-Holocaust reading of the verse would reframe this verse to be better understood as, “We will grapple with each word to assess its validity, and then we will understand.” Each of us needs to painstakingly critique social media posts passed along by people we love. On all sides of the political spectrum, the time has long since passed for blindly sharing or retweeting without first being sure that the source is reputable. We need to be the ones to ask, all the time, is this true? Na’aseh V’Nishma, the post-Holocaust ethic demands: We will scrutinize and then understand.

There are many reasons to refute Holocaust denial.  But, as we saw four years ago on January 27, if Holocaust denial is allowed to stand, other lies will surely follow, and democracy itself will be in peril.

Email ThisBlogThis!Share to TwitterShare to FacebookShare to Pinterest
Labels: Holocaust and Anti-Semitism, times of israel