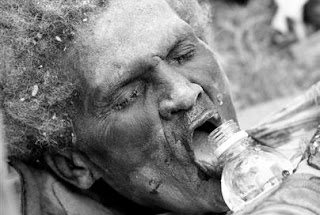 The Hebrew word for Egypt, Mitzrayim, represents hardship, distress, oppression, a narrow place or straits etc. (see here for more on this). This week and next week, we read in the Torah of the Israelites' emergence from these narrow places, from the fear and from the danger - and amazingly they emerge from it in song.

The woman above, Anna Zizi,
was rescued on Tuesday from the wreckage of a priest's residence at the main Roman Catholic Cathedral in Port-au-Prince. When she emerged, she was singing.

On Wednesday, Laurie Bickel, one of the administrators of God’s Littlest Angels Orphanage, updated the Today show on the more than 100 orphans in her care:

“You get to the playground areas and the kids are just playing. They’re enjoying today; they’re enjoying that moment, and that’s how the Haitian people are,” Bickel said. “In the face of all of this, they’ve been singing and just praising God that they survived, and they are here and they will get through this.”

Visit msnbc.com for breaking news, world news, and news about the economy

Now, when we read of Moses and Miriam's song following that excruciating passage through the birth canal known as the Red Sea, we can imagine these Haitians and their escape from the bloody doorposts of their collapsed homes/tombs, evading miraculously the clutches of the angel of death. There was no passing over their homes last week, but there were narrow straits, there were enclosed places aplenty. And when they came out of it, all they could do was sing.

Hindsight, as they say, is 20-20. But imagine the terror of the person who sees those enormous walls of water on both sides, whose only hind-sight is the rampaging Egyptians in the rear view mirror. And then she looks ahead and sees only barren desert.

When barren desert is the best case scenario - and you've neglected to pack the water bottles - death seems all but a certainty.

That's what it is like for so many in Haiti these days - those who escaped the collapsing walls, and those still underneath. Narrow places.

We were in Mitzrayim too. And that is precisely why the Jewish community worldwide, here and especially in Israel, have rushed to the side of the victims. We are all too familiar with their plight.

This is such a beautiful post. I watched the video and was crying - not for those who have died but for the ones who survive with such faith.