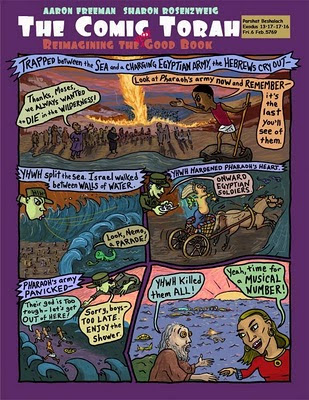 This week's bar mitzvah, Jacob Gubner, loves comics and Superheroes (his speech appears just above this posting), so it got me to thinking about the topic.
Graphic novels and comics have become very popular in this age, where learning styles have become so visual. And Jewish studies have certainly come of age as well. You can see the portion of the week graphically (and humorously) explained in the comics from http://www.thecomictorah.com/ (click to enlarge). And while you are at it, check out http://www.talmudcomics.net/ to head to the next level. 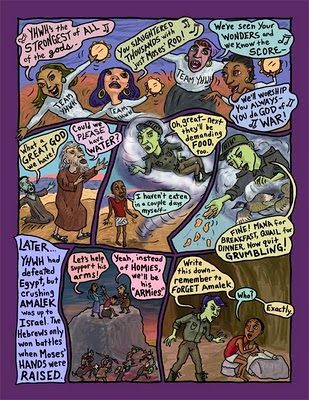 The entire corpus of Jewish literature may soon find its way into the comics. No topic is taboo - even the Holocaust has been tackled by the groundbreaking Maus series, in which Art Spiegelman depicts Nazis as cats and Jews as mice.
This past fall, satirist Robert Crumb, best known for his "Keep on Truckin'" and "Fritz the Cat comics, took the book of Genesis out of the Sunday schools and into the sweaty precincts where it probably most belongs, with a most graphic of R-rated renditions. The Book of Genesis illustrated by R. Crumb has drawn sharp criticism by some religious groups but has been seen as a generally accurate portrayal of the biblical book, which, is, face, it, as steamy as it gets. 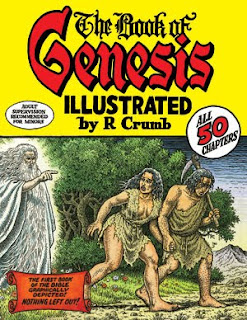 Meanwhile, Amazon posts it at #170 among all books, so, say what you might, the Bible is still a best seller, even when graphically drawn in graphic form. And to read these reviews is to see why:
“To say this book is a remarkable volume or even a landmark volume in comic art is somewhat of an understatement.... stands on its own as one of this century’s most ambitious artistic adaptations of the West’s oldest continuously told story.” — Paul Buhle, The Jewish Daily Forward

“It’s a cartoonist’s equivalent of the Sistine Chapel. It’s awesome. Crumb has done a real artist’s turn here—he’s challenged himself and defied all expectation. ... I’ve read Genesis before. But never have I found it so compelling. By placing it squarely in the Middle East—and populating it with distinctively Semitic-looking people—Crumb makes it come alive brilliantly.” — Susan Jane Gilman, Morning Edition, NPR
See the full Forward review here.
As for Jewish comic book heroes, you can find them here, here and here.
Posted by Joshua Hammerman