MLK, Heschel and the Women of the Wall

Dr. Martin Luther King, whose birthday we commemorate this week, had a close relationship with the Jewish community, as is shown in this link describing King's view of Zionism. 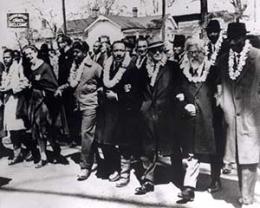 Last week was the Yahrzeit of Rabbi Abraham Joshua Heschel, who marched with King in Selma and commented later that he felt he was "praying with his feet."  Read this remembrance of that special relationship and historic march, written by Heschel's daughter, Susannah Heschel.  She mentions that the famous photo of the two spiritual giants marching together has become an icon of American Jewish life.

Heschel often spoke of the need for prayer to be “subversive." As he wrote in an essay entitled "On Prayer," found on pp. 257-267, of a superb collection of his essays entitled, "Moral Grandeur and Spiritual Audacity,”  "The beginning of prayer is praise. The power of worship is song. To worship is to join the cosmos in praising God. . . . Prayer is meaningless unless it is subversive, unless it seeks to overthrow and to ruin the pyramids of callousness, hatred, opportunism, falsehoods. The liturgical movement must become a revolutionary movement, seeking to overthrow the forces that continue to destroy the promise, the hope, the vision."

I've always been moved and motivated by that passage.  And so I ask often, as we all must, is our prayer subversive? Does it overturn pyramids and move mountains?  This question is especially appropriate this week as we read the Exodus story in the Torah.  Does it move us to tears?  This is also appropriate in light of the horrible suffering of the people of Haiti.  Does our prayer move us to help them, to feel their pain?

These past few weeks we've watched in horror at the mistreatment of the Women of the Wall in Jerusalem. Ironically, they are fighting some of the same battles fought by Heschel and King - including the requirement that women ride in the back of the bus in Jerusalem.  But their prime fight has been to reclaim the Kotel for all Jews. As Anat Hoffman, a leader of the Women of the Wall, wrote in this week's Forward,

One recent afternoon, while I was riding on a gender-segregated bus in Jerusalem, an Orthodox woman told me she didn’t mind sitting in back and out of sight, because it helped the men “keep cleanliness of the eyes.” Her reasoning was familiar to me; it followed a logic similar to the rationale behind a men-only path at the Western Wall that was cleared just two years ago so that men would not have to look upon women as they make their way to the Kotel to pray. It’s no coincidence that Jerusalem’s first gender-segregated buses were for routes going to and from the Wall.


If you want a quick lesson on the growing gender segregation and discrimination in Israel, I suggest taking a look at the policies in place at the Western Wall, which are being constantly revised to deny women equal access at this sacred space.


The Conservative movement this week issued a joint statement of condemnation of that mistreatment and support for the women:


On Supporting Freedom of Religious Practice in Israel

NEW YORK, NY - The recent detention and fingerprinting of Anat Hoffman, director of the Israel Religious Action Center, civil and consumer rights advocate, founding member of Women of the Wall and past member of the Jerusalem City Council, for her role in advocating a woman’s right to pray at the Kotel opens a new and troubling chapter in intra-Jewish relations in Israel.

The many groups of Conservative Judaism listed below, affirm that Hoffman’s detention, following the recent arrest at the Kotel of Nofrat Frankel for wearing a tallit and carrying a Sefer Torah during worship services on Rosh Hodesh, drives a wedge between our communities at a time when working for unity within Israel and enhancing the connection between Diaspora Jewish communities and Israel should be a primary concern. We urge the municipality of Jerusalem, the State of Israel and its ambassador to the United States to realize the gravity of this issue and take immediate steps to promote religious pluralism, provide equitable treatment to non-Orthodox streams of Jewish life and end the harassment of women seeking to pray with dignity at the Western Wall, Judaism’s most holy place.

We urge members of our congregations and all members of Conservative Judaism to write a letter to Ambassador Michael Oren expressing the above sentiments. Further, as Conservative Jews, we hope for a pluralistic Israeli society that welcomes all Jews who share a commitment to Jewish continuity, peoplehood and Zionism. When the government limits access at the Kotel, changes the status quo of “who is a Jew,” and refuses to grant Masorti rabbis equal rights in Israel, many in the Diaspora community, whose support of Israel is crucial if Israel is to continue to flourish, instead feel alienated.

By standing with the Women of the Wall, we affirm our unity as a single world-wide Jewish community. We affirm our connection with our sisters and brothers in the Land of Israel and we affirm the abiding holiness of the city of Jerusalem in our lives.

Download a Sample Letter to Ambassador Oren: http://rabbinicalassembly.org/living/social_action.html
Letters should be sent to:
Dr. Michael B. Oren, Ambassador of Israel to the United States
Embassy of Israel
3514 International Dr. N.W.
Washington DC 20008
info@washington.mfa.gov.il

You can read more backround on WOW here.

A few years ago, on its web site, the Women of the Wall justified its difficult undertaking in challenging the Israeli rabbinic authorities, in this audacious manner:

Jewish women who have created new rituals for themselves, like wearing women’s prayer shawls and donning teffilin, acts permitted by some of the greatest Jewish lawgivers, deserve the same benefit of the doubt as to their sincerity. In general, one cannot help but wonder at the fat-cat arrogance and lack of respect shown by these men, party functionaries in saintly guise, in the name of our holy Torah. After all, people with the extreme delicacy to cover the challah bread so as not to shame it when we bless the wine first, show a shocking disregard for the feelings not only of Women of the Wall, but of Jewish women in general.


Because I have a hot flash for you, fellows. The rules have changed. When you mock women for daring to have their own opinions, or trying to enrich their religious experience in ways that they find meaningful, look behind you: you’re not leading anyone in the Jewish world but men like yourselves. Certainly no one from the modern Orthodox world. In fact, we can’t even tell if your own wives agree with you, voicelessness being a quality nurtured in your women from early childhood through old age.

The audacious voice of Heschel lives on.  May it continue to resound in our prayers!
Posted by Joshua Hammerman

Email ThisBlogThis!Share to TwitterShare to FacebookShare to Pinterest
Labels: masorti, MLK day, Women of the Wall