Straps on a Plane! 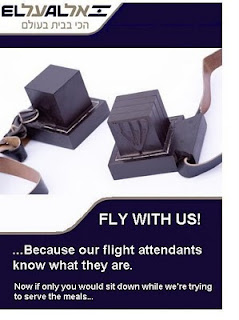 It may not be as scary as snakes on a plane, but last week the straps and leather boxes of tefillin were scary enough to send a plane from La Guardia to a premature landing. The reactions have been amusing. On Facebook, I just joined the Mile High Tefillin Club.

Stephen Prothero, a professor of religion at Boston University whose book "Religious Literacy" describes problems that stem from ignorance of other faiths, said the incident points to a broader problem.

"It's a basic case of religious illiteracy, grounding a plane by religious ignorance," he said, adding that the crew should have been able to ask someone on the ground about the practice.

"We should have a world religions course in the public schools. If the flight attendant and the pilot had had a basic course on world religions in the 10th or 11th grade, they would have known about tefillin." more

Of course, when it comes to tefillin, most Jews are also religiously less-than-literate.

Fortunately, we Jews have no rituals involving filling our underpants with explosive material, or we’d really be in trouble. But we do have a sword shaped wand-like object that we wave menacingly on Sukkot while holding this grenade-like lemony thing, although we’re very careful not to pull the pin. And then there's that ram's horn, capable of knocking down the fortifications of entire cities (but only if blown by some dude named Joshua Fit-da-battle). Then there's our secret weapon: matzah. Guaranteed to plug up any digestive system for weeks on end, and, if consumed by enough people, it will bring down any plane simply by the sheer increase of the payload. Turn that matzah into those cannon balls that my grandmother used to put into the soup and you've truly got a lethal weapon on your hands. And for those in need of gastronomic Drano, you need to wait a full eleven months after Passover for the prune hamentashen to appear back on the shelves. So if I were a homeland security agent, I’d be on the lookout for a wide variety of suspicious Jewish ritual objects.

Here's a tutorial I was sent, showing how to put on tefillin while on a plane without scaring the other passengers. Keep in mind that if you're on El Al, all bets are off. Half the passengers can't stand you before you've left the ground, while the other half want you to join their minyan in the back.

To learn more about tefillin, come to our World Wide Wrap seminar this coming Sunday morning at 9 AM.

Email ThisBlogThis!Share to TwitterShare to FacebookShare to Pinterest
Labels: tefillin