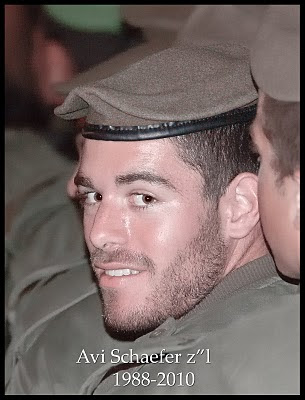 One year ago, Avi Schafer was killed tragically in an auto accident near the campus of Brown University, where he was a freshman. This extraordinary young man's first yahrzeit will be recalled this weekend across the country at synagogues, Hillels and havurot, in what is being called "Avi Schaefer Shabbat." We'll be among those synagogues who will recall Avi during services and in particular, by reading this introduction to the mourner's kaddish written in his memory.

Read Avi's full bio here. Avi started college late because he served in the IDF for three years. He came back from the Israeli military to a very different kind of war, and immediately Avi became engaged in the battle for peace on a major college campus. He was not a "my-country-right-or-wrong" defender of Israel. Instead, he reached out to the other side. His outreach was not always reciprocated, however. Read this column he wrote in the Brown Daily Herald.

He said: "Let’s figure out how we can work together to do something productive to honor your name and find our common ground. I am here, ready and anxiously waiting for you to work with me, not against me. Do not give me another reason to lose hope, because my patience is sadly running out.”

Avi already had begun discussion with a Brown professor to create a course that would allow real dialogue to take place. Meanwhile, his final project for the Israel committee was a major fundraiser, not for Israel, but for Haiti, which raised $4,000 on campus. He quickly had become a leader of Hillel's Israel committee, even as a freshman. Everyone looked up to him. Here's Avi's final blog post, describing that Haiti event.

He was loved by students, professors and many in the Providence community, touching more lives than one would think possible in so brief a time. He was advising the Providence police SWAT team, sharing the lifesaving skills he had learned in Israel.

We can all use some of Avi's spirit with us now, as we face the realities of our complex world. The peace process, so full of promise and hope a few short months ago, seems hopelessly stalled as settlement construction and leaked diplomatic cables threaten the fragile stability of the region. On our campuses in America, the issue of peace in the middle east remains divisive and polarizing. But hope still remains, in the memory of Avi and his contribution to the cause of peace in this world. His words, excerpted from an op ed he wrote in the Brown Daily Herald, resonate heartbreakingly in his absence:

I am here, ready and anxiously waiting for you to work with me, not against me. Do not give me another reason to lose hope, because my patience is sadly running out. I wait for the day that the words of the Prophet Isaiah will ring true: “Nation shall not lift up sword against nation, neither shall they learn war any more.”

Avi's legacy is one of activism, love, peace, and hope. Let us honor his memory by striving to bring his spirit into our discussions of complex, divisive issues in our community. Let us follow his example of compassionate activism and pursue peace and justice with the same fervor that he showed in his brief, shining moment on this earth. Let us hold a place in our hearts for him this February, and work towards realizing his vision of peace in our world.
Posted by Joshua Hammerman