We come into this final night of Hanukkah with a heavy heart.  At a time when our joyous celebration of light is supposed to reach its peak, instead we are afflicted with fear as result of an intensifying cascade of hate directed so close to home, against Jews simply because they are Jews.  Below is a statement issued today by all the arms of the Conservative Movement, expressing how so many of us are feeling.

In reflections shared today, Rabbi David Markus points to this photo taken in the 1930s by a Jewish family wishing to demonstrate their Jewish pride in full view of a Nazi flag.  In 2017, Newsweek ran an article about it. 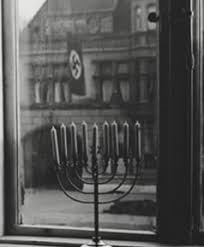 The message: "Our light will outlast their flag."
Markus adds that Hanukkah reminds us that antisemitic hate bubbles up from era to era, and that every era requires its own fight against humanity's most senseless and enduring hatred. "These days call forth our light, our resilience, our pride, our faith, our abundant caring, and our mitzvot in the world," he adds.
Scholar Dr. Deborah Lipstadt wrote in her recent book on anti-Semitism, the best defense against such hatred is Jewish joy to transform the world. Where there is darkness, we ourselves must be the light.  And our light has indeed outlasted that flag - and so many other hateful ideologies.

PS - IF YOU ARE FEELING A NEED TO SHARE PRAYERS, CONCERNS AND FEARS - AND PERFORM A MITZVAH TOO - HANG OUT WITH ME IN THE LIBRARY AFTER OUR 7:30 MINYAN THIS TUESDAY MORNING, (WHICH IS ALSO MY FATHER'S YAHRZEIT).  WE'LL PUT UP SOME COFFEE.

The Conservative/Masorti Movement is outraged by the rash of antisemitic assaults against identifiably Orthodox Jews this past week in the New York City area, most recently the attack last night on the Monsey home of Rabbi Chaim Leibish Rottenberg celebrating the seventh night of Hanukkah. That this particular series of attacks comes just a few days after the December 10 shooting of six at a kosher market in nearby Jersey City, NJ, killing three, is especially concerning.

We thank law enforcement for their hard work and call on them to redouble their efforts to provide protection. We urge political and civic leaders to speak louder still and to work together even more closely to stem this tide of hatred and to address any repetitive pattern emerging from these attacks and those of the past year in the New York area. We must not allow acts of anti-Semitism to become the new normal.

As we move into the last day of Hanukkah and enter the secular new year, we pray that the lights of kindness, caring, dignity and peace will displace the dark forces of hatred and bigotry. We are just now entering the new Jewish month of Tevet and in only a very few days the secular new year of 2020. May these new beginnings also mark a new time for the wellbeing and safety of Jews from every part of the Jewish community and other minorities in the U.S. and around the world.