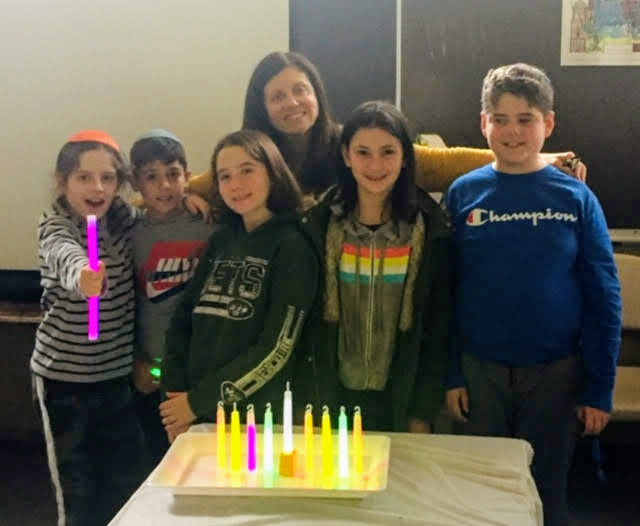 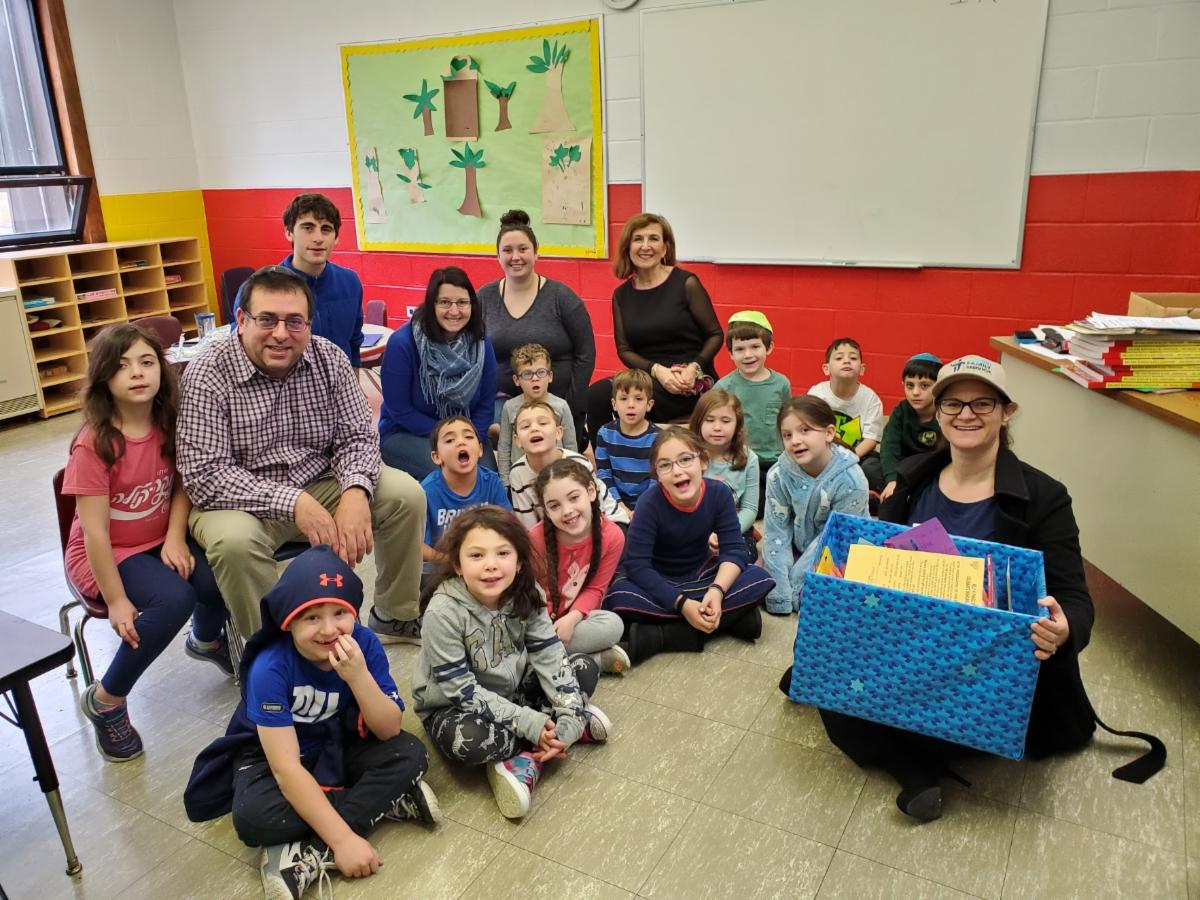 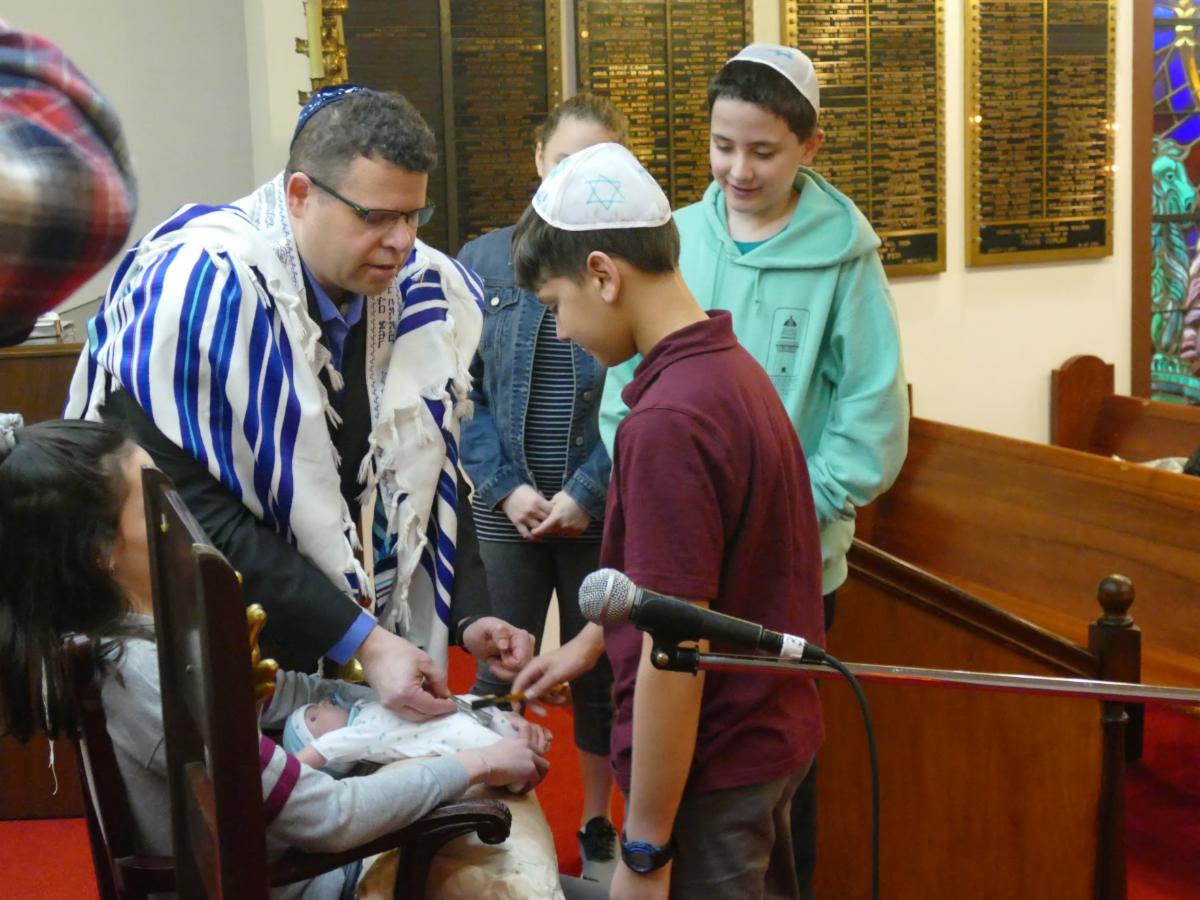 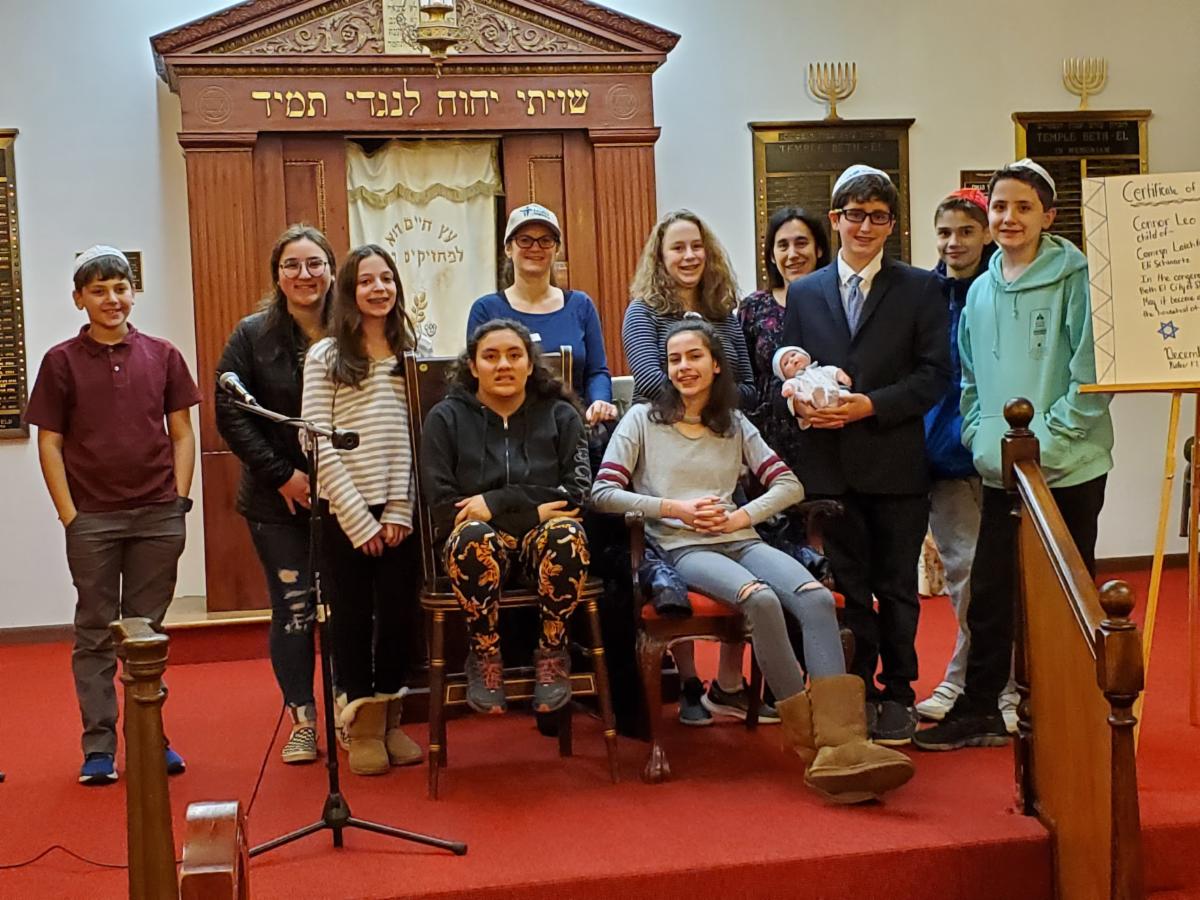 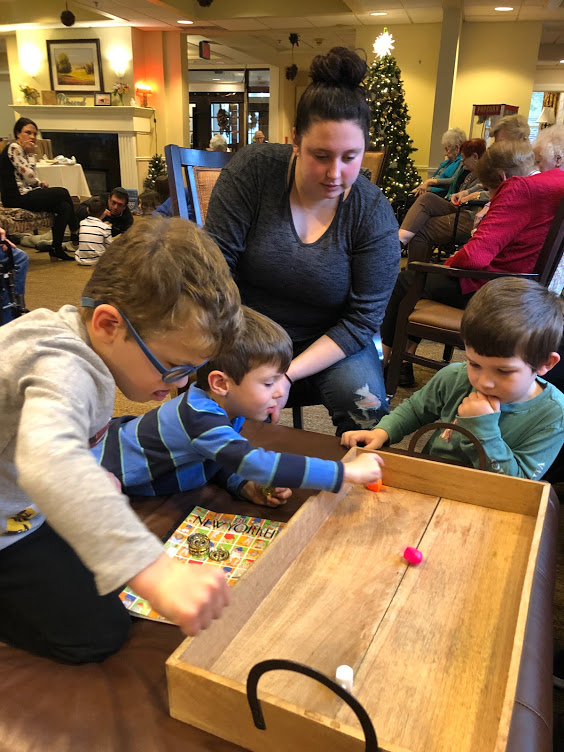 It was a busy Sunday for our Hebrew School students: Younger students brought Hanukkah cheer to Brighton Gardens while older grades created light, scientifically reenacting the miracle of Hanukkah, as part of our Jewish STEAM program, and our 7th grade celebrated its mock Brit Milah. Additionally, our students prepared gifts to deliver to less fortunate families with Schoke JFS.  Meanwhile, a Hallah baking class took place in the kitchen. 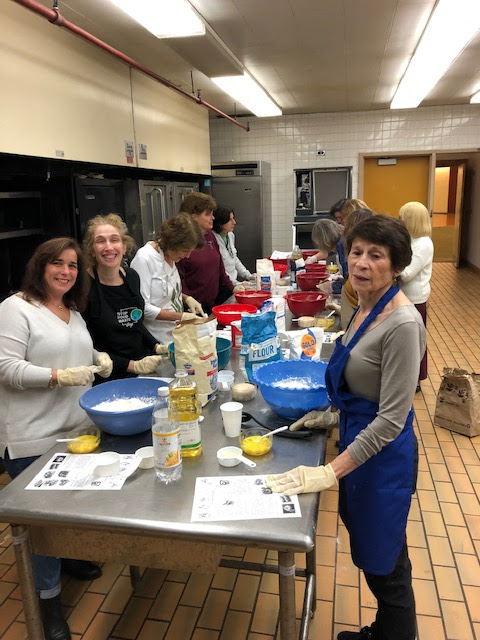 As some head away for warmer or colder climes, TBE continues to be an oasis of calm in turbulent times.   Join me and Beth Styles on Friday night at 7:30, and on Shabbat morning, another Shabbat-in-the-Round, featuring Cantor Debbie Katcho-Gray. We begin with breakfast at 9:30, followed a mellow and meditative service at 9:45.  Join us at services throughout the holiday weeks, clear through to 2020 (there will be no Shabbat-O-Gram next week).

If you are gathering with family over the holidays, now's the time to check out our 2020 tour of Eastern and Central Europe!

Hanukkah begins on Sunday night.  Here are some helpful videos.

You can find more about Hanukkah at My Jewish Learning's website. At the bottom of this email, see a Kabbalistic approach to Draydle Consciousness - click here for a pdf version.

The Miracle of the First Night
From earliest childhood, Jews are taught that the great miracle of Hanukkah involves the discovery of a tiny cruise of oil, just enough to illumine the grand candelabrum at the Temple in Jerusalem for one solitary night.  This followed the Maccabees' shocking victory over the mighty Syrian-Greek armies of Antiochus in 164 BC.

A natural question arises: What was miraculous about the first night?  On that night, there was plenty of oil to keep the flames burning. It was expected to remain lit through the night, so was there anything miraculous going on?

Was the miracle of the first night...

-     That the Maccabees were able to discover even a single drop of ritually-pure oil, given the lengthy Greek occupation and resulting desecration of the sanctuary?  The place was a mess, and with a statue of Zeus put there for good measure.

-        Or maybe it's that Judah and his band had the chutzpah to light the menorah at all, believing that somehow, despite the lack of resources, the light would be sustainable for an additional week.

-        Or maybe the miracle of the first night is something else entirely. Maybe it's that, two thousand years after the great victory, Jews are still around to celebrate it.

From time to time, I'm asked to perform funerals for people who have with no connection to a synagogue or a rabbi.  I consider this an important part of my work.  Recently I agreed to perform a graveside funeral for a 93-year-old man whom I had never met.
Gil grew up in an observant household in Brooklyn and became Bar Mitzvah there.  He married, moved to Connecticut, had five children and belonged to a local reform synagogue for a time.  He remained a proud Jew and fierce defender of Israel, but over the years, he and most of his family drifted away from organized Jewish life.  They left their synagogue and stopped celebrating Jewish holidays, and in turn the Jewish community lost interest in them.

Gil lived in here for over half a century - yet our paths never crossed.

When people talk about "flyover states," it's usually in reference to those places that we ignore and bypass on the way from one coast to the other.  For me, and most of the established Jewish community, there are lots of "flyover Jews," people whom we barely notice although they are living in our own cities, and too often we write them off from Jewish life. Gil's family is fascinating and quite accomplished.  But from a Jewish perspective, they were mostly off the community's radar.

Except for Tad - one of Gil's children, and my prime contact before the funeral. Tad mentioned that he, unlike most of the family - including Gil himself - had returned to Jewish life.  As he put it, his "Jewish rebirth" happened about two decades ago, when his family joined a new local start-up Reform congregation in Northampton Mass., following the birth of his children, Hannah and Ida.

Both daughters continued nurturing their Jewish roots when they went off to college.  Hannah traveled to Israel on Birthright.  Ida visited historic Jewish temples while studying abroad in Chile and Spain.

"I am very proud and honored that they will continue Jewish traditions because they want to," Tad told me.

As we stood at the grave on a cold Friday, most of the children and grandchildren stepped forward to pay tribute to Gil, each sharing lovely reminiscences of a caring and doting dad and grandpa.  They spoke, as so many do, about the guy who always was there for them with the needed advice or timely quip.

Then, the last grandchild stepped forward to speak, visibly distraught.  It was Tad's daughter Hannah.

In an almost confessional tone, her eulogy began with the revelation of her own Jewish reawakening at school, which led her to attending services frequently on Friday nights.  During those services, she explained, one prayer in particular had become a real source of inspiration for her - the Sh'ma, a proclamation of God's Oneness.

On the weekend of Thanksgiving, she visited Gil at his nursing home for what would be her final visit, and she began to feed him his dinner, slowly and meticulously, while looking him directly, face to face the whole time (his eyesight had mostly failed).  Mealtime had become the focal point of her visits and it was the only time Gil was lucid enough for even basic communications.

After the brief meal, Hannah decided she was going to try to sing to him; she thought the Sh'ma would be the perfect choice, because of its simple rhythm and a melody he just might recognize.

He did more than recognize it.

"It was astounding and surreal when Dad started mouthing and even singing along with Hannah - in his own troubled, quiet voice," Tad later told me.

Hannah repeated the prayer again, and Gil responded again.  Tad and Hannah looked at each other in amazement - through smiles and tears.  Tad figures that Gil had not recited that prayer twice in fifty years, but through the fog of Parkinson's, somehow it came back to him.  These sacred words somehow sifted their way through the dusty archives of his memory, from his brain straight to his lips, and they sang it together.

Hannah sang the Sh'ma for the assembled group at her grandfather's graveside.  She shared with them these secret, holy words, but no one joined in.  It seemed to me that few had any idea about the compelling role that prayer has assumed throughout Jewish history, that millions of martyrs have died with the Sh'ma on their lips - and that this prayer, which heralds the end of Yom Kippur, is also our traditional deathbed confessional.

As Hannah concluded her tale at that wind-swept cemetery on Long Island, I told her and her family that she, unknowingly, had coached her grandfather into reciting the classic deathbed confessional as his final words.

Afterwards, while driving home from the cemetery, I wondered whether I should be depressed that, for this large family, with 35 of them at the cemetery, only a few retain even the most rudimentary familiarity with Jewish traditions.  Or should I be inspired at having seen that no Jewish soul is ever really lost, not even a man on his deathbed, or a granddaughter reaching out to hold his hand?

Judaism has never been about the percentages.  We'll always be the tiniest of minorities.  It's been about a tiny candle that defiantly refuses to go out.If the miracle of Hanukkah's final seven nights revolves around those resilient few ounces of oil, the miracle of the night #1 is that, after 2,000 years, Jews, a miraculously inextinguishable and inexhaustible people, still joyously light their menorahs and spin their dreidels as the sun sets.

For those looking for words to help get us through what has been a stressful time, let me suggest this version of the Sh'ma, by Marcia Falk.  We read it often at services.  Over the past few years it has become for me an anchor, a guiding light, and a constant reminder of the eternal ideals that have sustained our people for so many centuries.  Take these words with you as my Hanukkah gift.  Recite them every morning and every night, wherever you might happen to be.  And be strengthened through them.  These words remind of us of who we are.
Shma:
Communal Declaration of Faith
Hear, O Israel---The divine abounds everywhere
And dwells in everything: the many are One.
Sh'ma, yisrael-
La'elohut alfey panim,
M'lo olam sh'khinatah,
Ribuy paneha ekhad.
Loving life and its mysterious source with all our heart and all our spirit,
All our senses and strength, we take upon ourselves and into ourselves these promises:
To care for the earth and those who live upon it,
To pursue justice and peace,
To love kindness and compassion.
We will teach this to our children throughout the passage of the day---
As we dwell in our homes and as we go on our journeys,
From the time we rise until we fall asleep
And may our actions be faithful to our words
That our children's children may live to know:
Truth and kindness have embraced,
Peace and justice have kissed and are one.
Marcia Falk,
The Book of Blessings 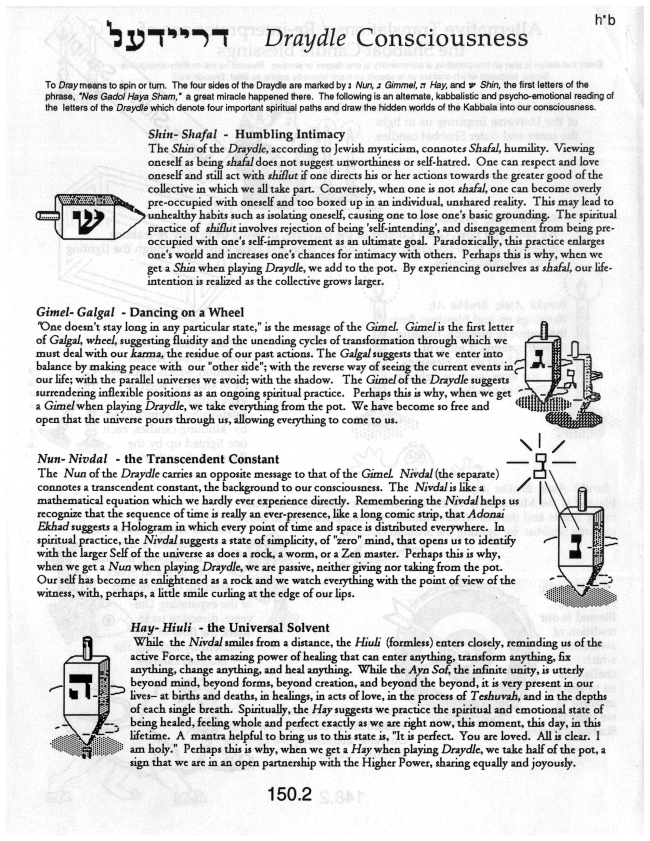