Coronavirus Update March 22: Some Welcome Wonderful News; "I Vant to be Alone"

In the midst of all our sadness and stress, some wonderful news. Ariel (Shindler) and Antony Wilshaw have informed me of the birth of Adora Mae Wilshaw, born at 9:49 pm on 3/12/20, weighing 5 pounds 12 ounces and 18 inches long. Mazal tov to them and to grandparents Steve and Karen Shindler. Ariel and Antony remarked, "We are both over the moon with our little gift." And they will have quite a tale to tell Adora when she is a little older! 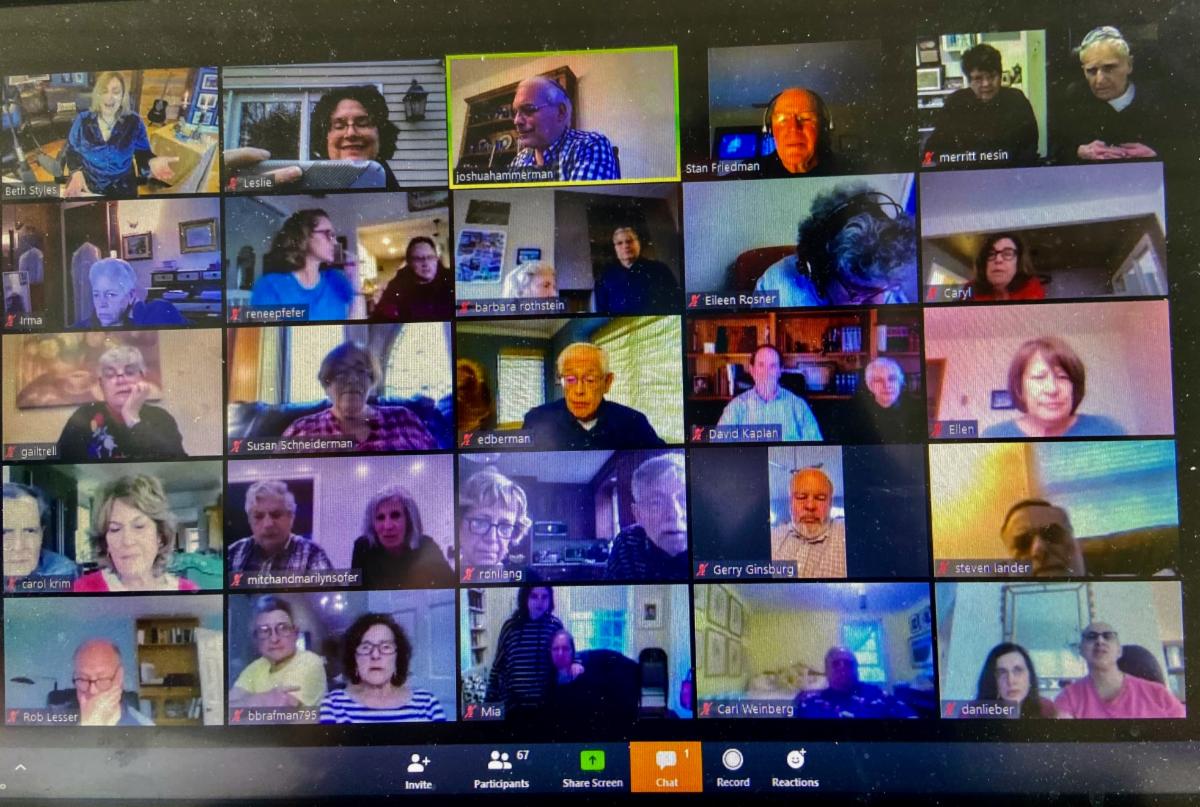 I cannot tell you how much I enjoyed our Zoom Kabbalat Shabbat on Friday.  At its peak, we had nearly 70 in the "room" with us.  I especially loved the chat messages and seeing so many smiling faces. We've all been yearning for connection. Special thanks to Stan Friedman for his facilitation and of course to Beth Styles.  The one thing missing is the sound of all of us singing together, but it is a small sacrifice considering what we are all facing right now. 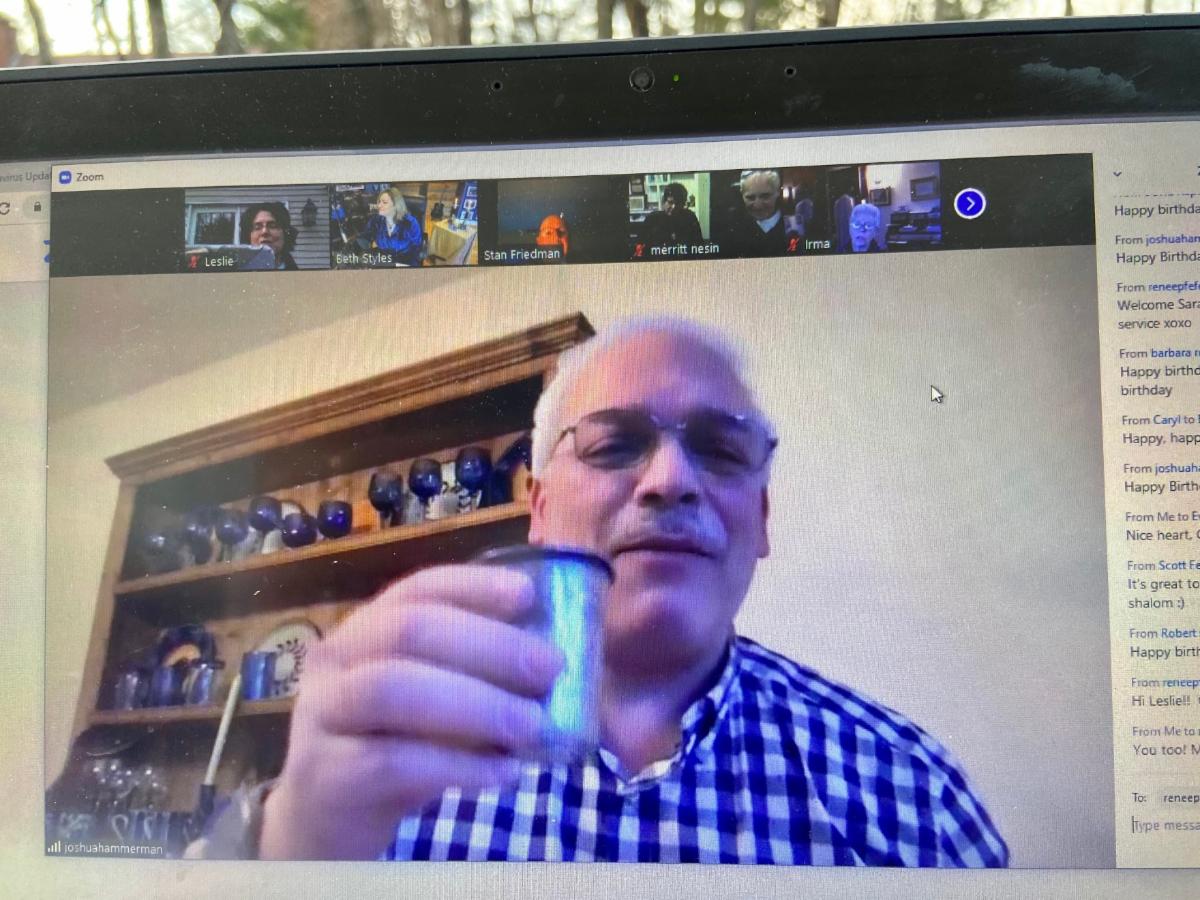 Thanks to Leslie Heyison for the photos from Kabbalat Shabbat

Let's move to something to lighten the very serious situation we all face...
Here's a nice diversion, suggested by Alan Sosnowitz
I was a big fan Lehrer fan back when he was a one-man SNL -
before there was SNL

Have you filled out your bracket? 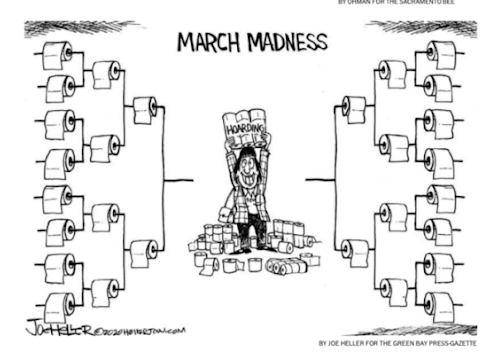 An Israeli mom lets loose on distance learning.  Hilarious!
And below, minyans from adjoining balconies - from the Jerusalem Post. 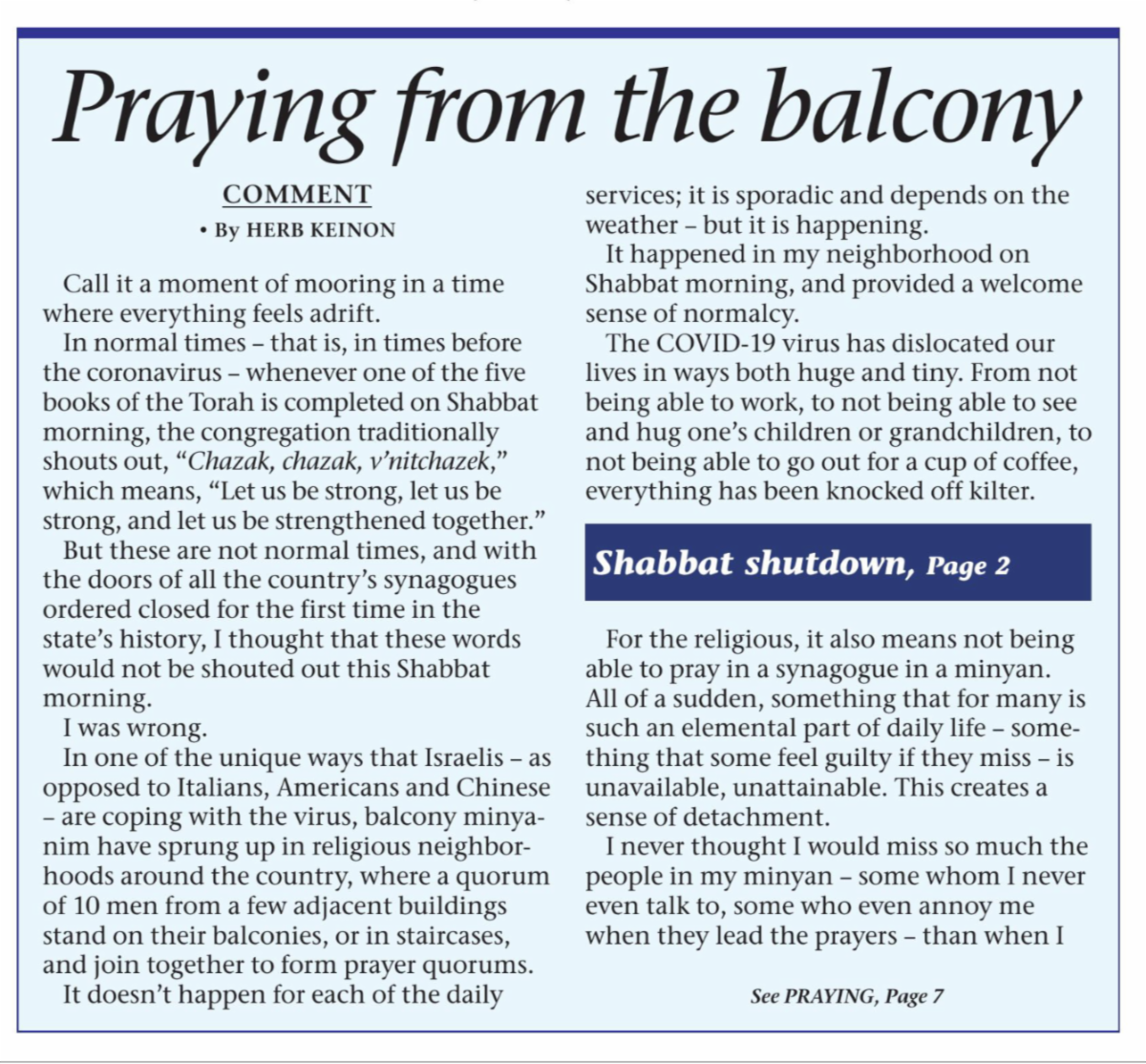 SUNDAY AT 1:00 PM HEALING PRAYERS AND CONVERSATION
with me and Katie Kaplan.... 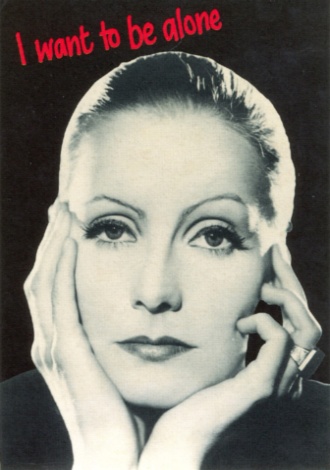 I've received some heartfelt thanks from some who prayed with us on Friday, including and especially from people who live alone.  No one should feel alone at a time like this.

Only Greta Garbo "vanted" to be alone - though the precise quote is, "I want to be LEFT alone."  But either way, she wasn't exactly looking for the nearest minyan.

So this a good time to think about aloneness in Judaism, especially as it relates to nature and technology.

We can all be alone and together at the same time, and technology is facilitating that. The way I see it, the only way to strengthen the bonds of community, paradoxically, is to strengthen ourselves individually, even if that means separating a little, creating a space for oneself. Kabbalists, after all, believe that even God withdrew into Godself, in effect creating space for the world to evolve. It is a complicated concept called Tzimtzum, but basically it means that God, like any good parent, backed away voluntarily so that the children could mature on their own. That's how they could begin to explain the preponderance of evil in God's world.

True, Pirke Avot says, "Al tifrosh min ha'tzibur" - "Do not separate yourself from the community." I think that at this point in time, we need to amend that: "Don't break from the community, but, like God, do create a modicum of personal space so that you and others may grow."  And there are times, such as this week, when the act of separation from community is the most community-affirming thing we can do.
"Personal space" is a very contemporary term. Do yourself a favor some Sunday when this virus thing is over, and go down to the tenement museum on the Lower East Side, see where so many of our great grandparents lived, and imagine great uncle Yossel kvetching about a lack of "personal space." But the fact is that we often feel that walls of humanity are closing in on us, much more than they felt it back at the turn of the 20th century, when they were living ten to a room. If you don't believe me, go to Fenway in Boston and try to squeeze into the seats in the right field grandstand. The problem was addressed in recent years, but it makes one wonder how much the American tush increased in size since 1912.

Or have we become less tolerant of those sitting next to us and more needy of space?
We do need that space. At times it seems that the entire world is encroaching on us. We must recognize that the best way to become a more cohesive community is by allowing each individual to shine and flourish, each in his or her own way.

Now, we have that chance.  For the foreseeable future, we will have plenty of time to be alone, whether we "vant" it or not.

Reb Nachman of Bratzlav never had a problem reconciling Judaism's instinctive herd mentality with the need for personal space.  This prayer that he wrote - which I recited at services on Friday evening - has gained a completely new meaning during this Season of our Isolation.

Reb Nachman's Prayer for Nature
Grant me the ability to be alone;
may it be my custom to go outdoors each day among the trees
and grass - among all growing things and there may I be alone,
and enter into prayer, to talk with the One to whom I belong.
May I express there everything in my heart,
and may all the foliage of the field - all grasses, trees, and plants -
awake at my coming, to send the powers of their life
into the words of my prayer so that my prayer and speech
are made whole through the life and spirit of all growing things,
which are made as one by their transcendent Source.
May I then pour out the words of my heart before
your Presence like water, O Lord, and lift up my hands to You in worship,
on my behalf, and that of my children!
We need to become comfortable within our skins and in our shelters - but at the same time, we need to continue reaching out.  We'll continue to provide opportunities to escape the confines of this unceasing spiritual quarantine.

As this lovely poem suggests (thank you for calling it to my attention, Irma Ross), perhaps when we look back, our isolation will at least in part have been a blessing.

And The People Stayed Home, by Kitty O'Meara
And the people stayed home
And the people stayed home.
And read books, and listened, and rested, and exercised, and made art,
and played games, and learned new ways of being,
and were still. And listened more deeply.
Some meditated, some prayed, some danced.
Some met their shadows.
And the people began to think differently.
And the people healed.
And, in the absence of people living in ignorant,
dangerous, mindless, and heartless ways,
the earth began to heal.
And when the danger passed, and the people
joined together again, they grieved their losses,
and made new choices, and dreamed new images,
and created new ways to live and heal the earth
fully, as they had been healed.

The Doctor Who Helped Defeat Smallpox Explains What's Coming (Wired)
Epidemiologist Larry Brilliant, who warned of pandemic in 2006, says we can beat the novel coronavirus-but first, we need lots more testing. One of the more informative pieces I've read. Doesn't leave you reaching for the panic button.
Virtual pastoring, and the texts that give them comfort: 19 rabbis (and 2 cantors) on spiritual leadership through coronavirus (Jodi Rudoren, Forward)
Happy to be included in this collection.

Katie Porter's sister, a doctor, breaks down how staying in can save lives during the COVID-19 crisis (video)

Another poem sent my way by Irma Ross....

Kindness, by Naomi Shihab Nye - 1952 (click here for the complete poem)
Before you know kindness as the deepest thing inside,
you must know sorrow as the other deepest thing.
You must wake up with sorrow.
You must speak to it till your voice catches the thread of all sorrows
and you see the size of the cloth.
Then it is only kindness that makes sense anymore,
only kindness that ties your shoes and
sends you out into the day to gaze at bread,
only kindness that raises its head
from the crowd of the world to say
It is I you have been looking for,
and then goes with you everywhere
like a shadow or a friend.
Online Learning Opportunities from MyJewishLearning:

A Daily Dose of Talmud: This daily email series offers a teaching from a page of the Talmud, timed to the Daf Yomi cycle, a global project of learning a page of Talmud every day. (If tackling the entire Talmud feels like a lot, try starting with this email series on just the first tractate.)

The Deeper Side of Prayer: This weekly series offers unique insights, perspectives, history, pronunciation guides and more about individual pieces of Jewish liturgy.

Discovering Jewish Spirituality: From movement to creativity to kissing (yes, kissing!), this series will introduce you to various ways to enhance your Jewish spiritual life.

Choosing Judaism: Are you considering conversion? Do you know someone who is? This series will guide you through all the steps involved, from the initial decision to convert through the conversion ceremony and beyond.

Getting Comfortable in Synagogue: Do you find synagogue attendance intimidating? This series can help by introducing you to the basic structure of a synagogue service and diving deeper into the meaning of the most common prayers.
Online Learning from Hadar - some excellent classes and taped lectures; perfect for quarantine.

And finally, some excellent advice, via Roni Lang. 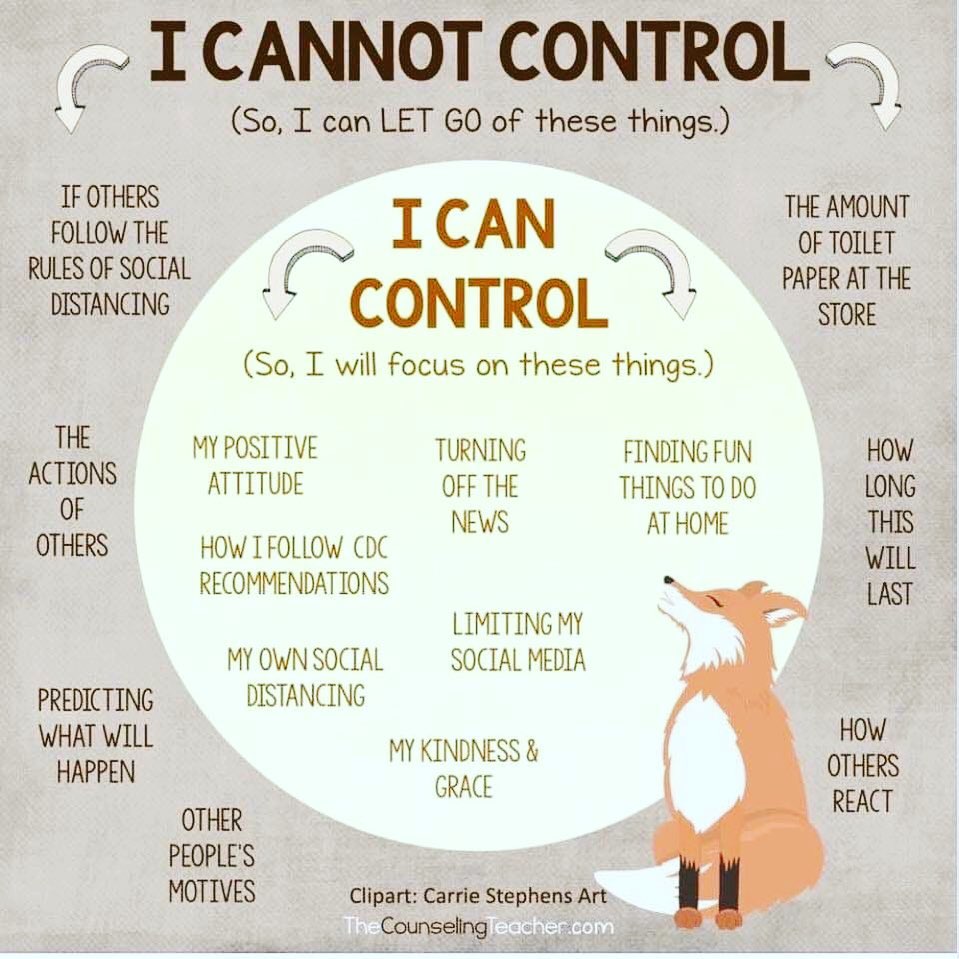 And finally, this sign spotted in the Wisconsin Dells, from the Milwaukee Journal 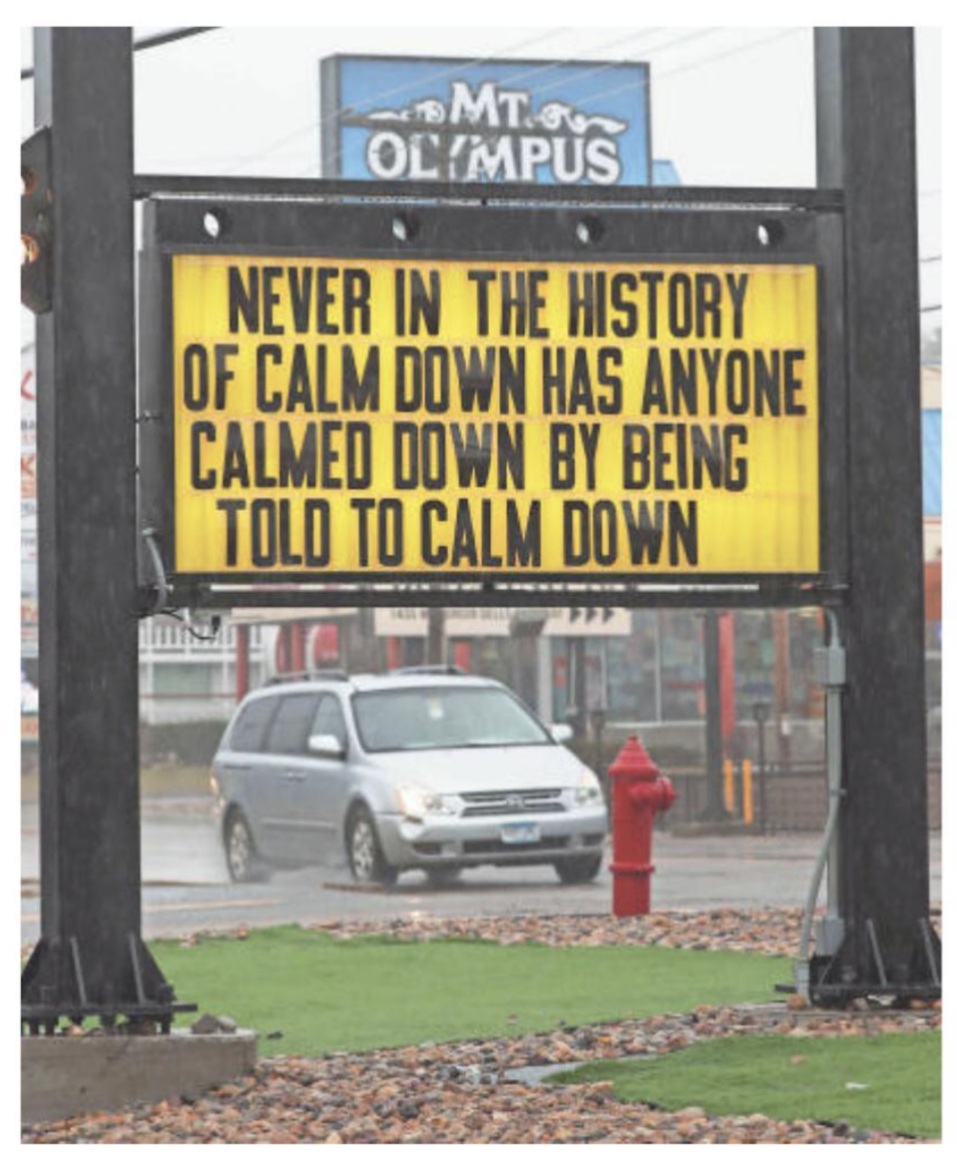