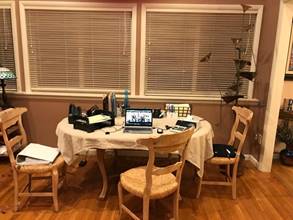 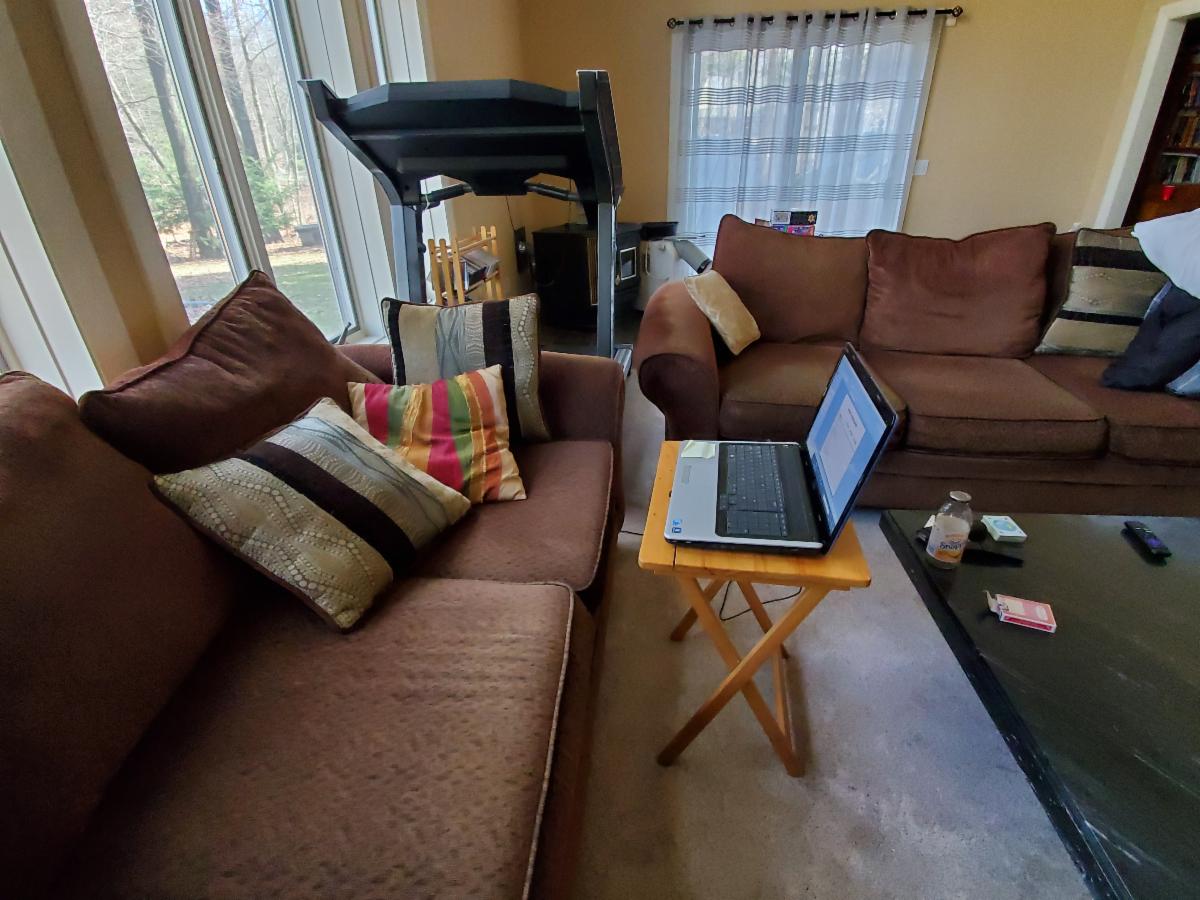 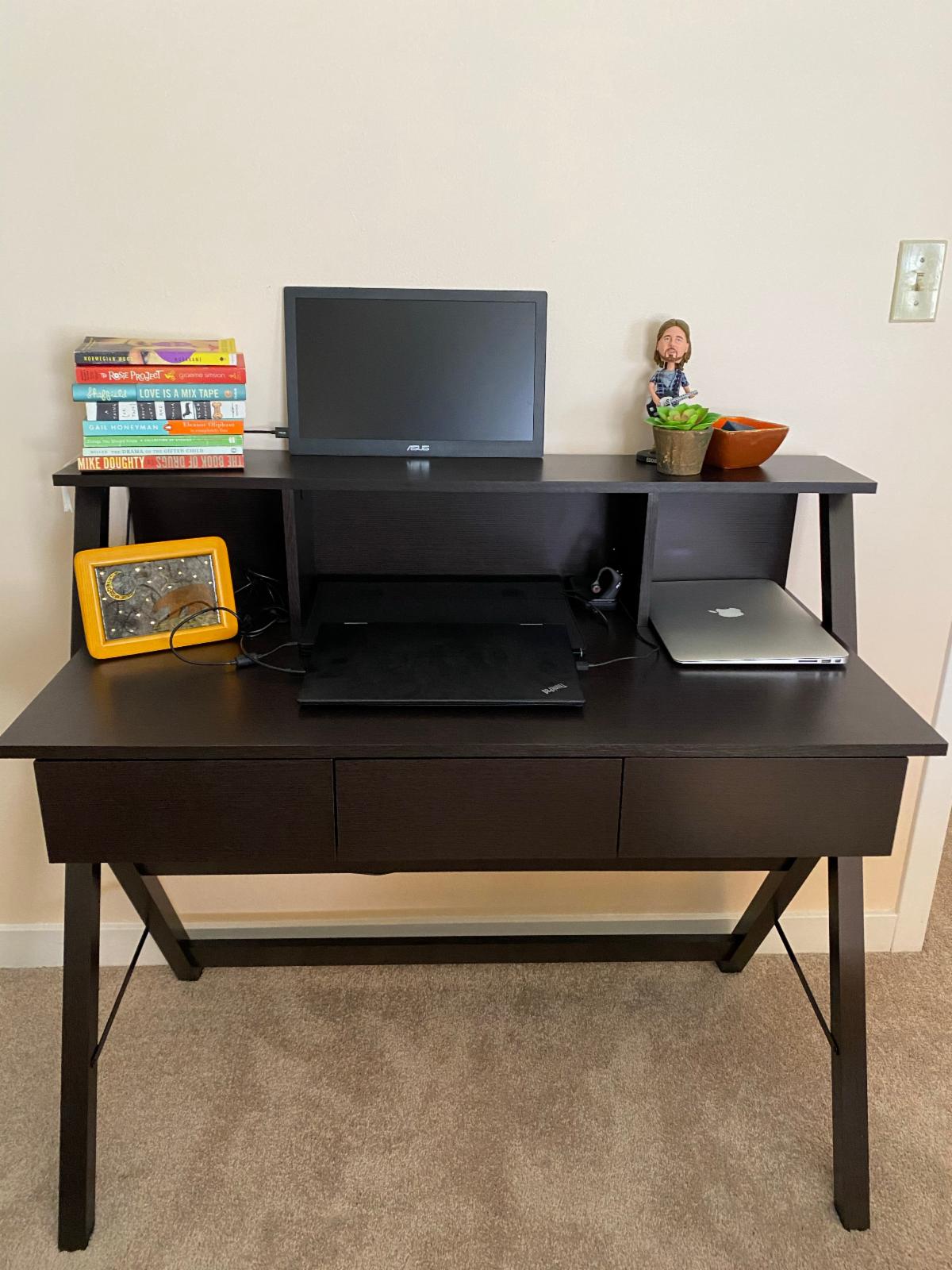 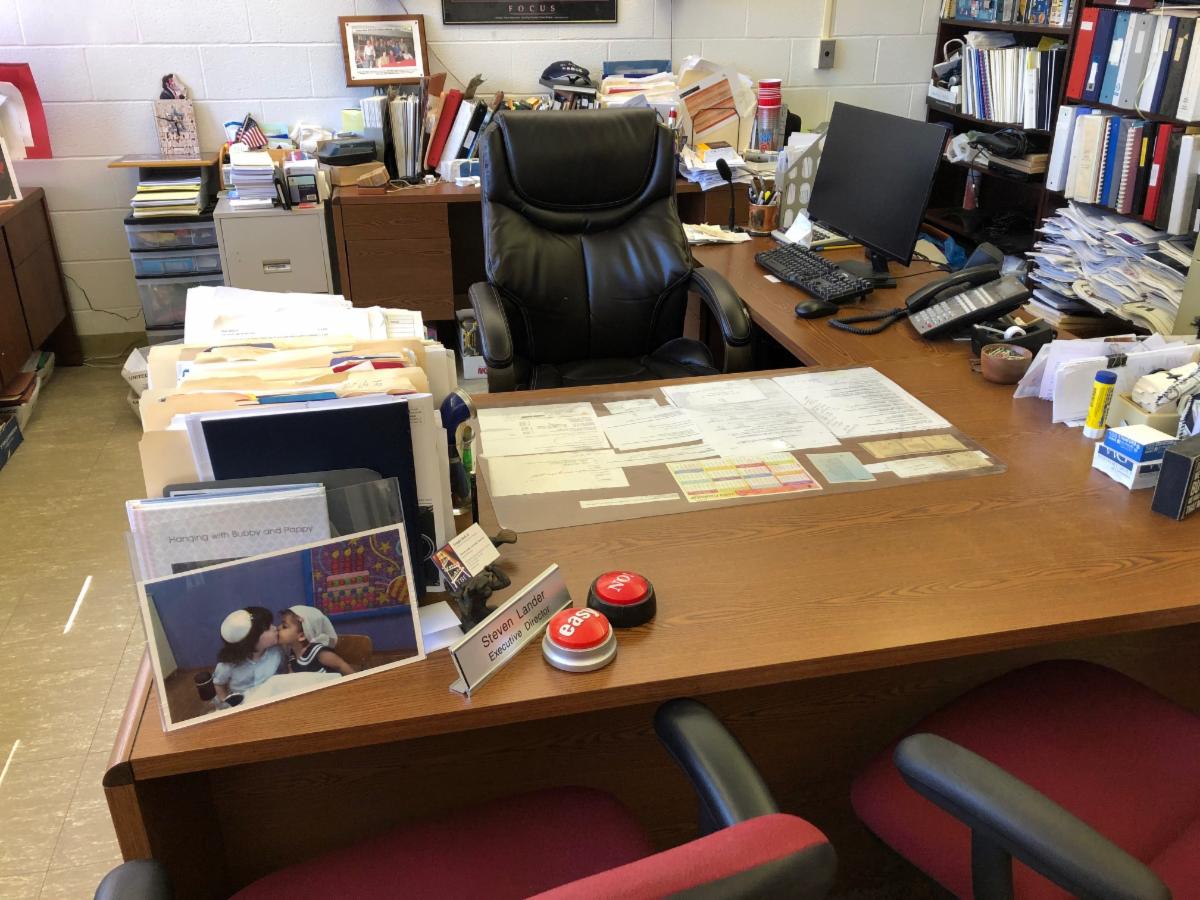 Jami Fener's - and Steve Lander's "home" workstations,
If his Steve's looks suspiciously familiar, he got dispensation from the governor to
"man the fort," along with Alberto and Rad. 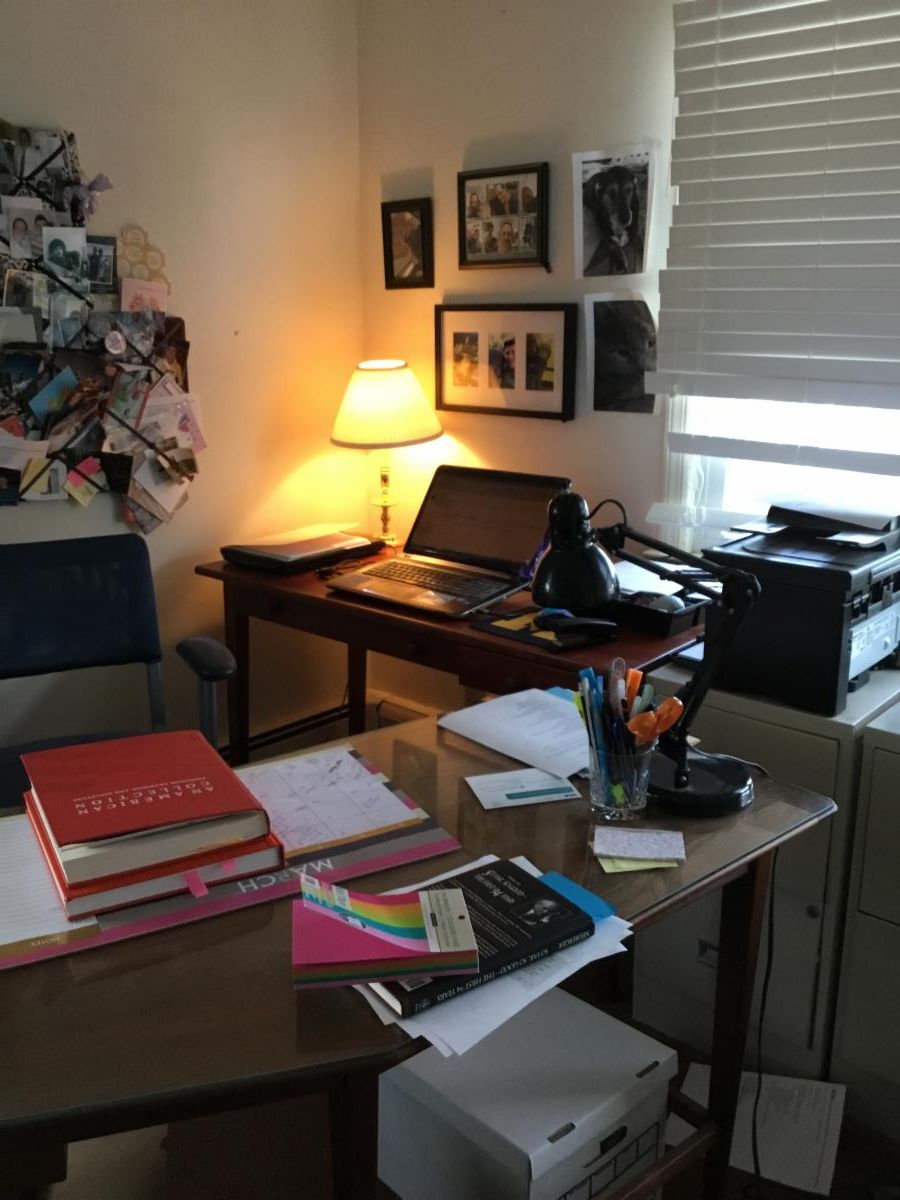 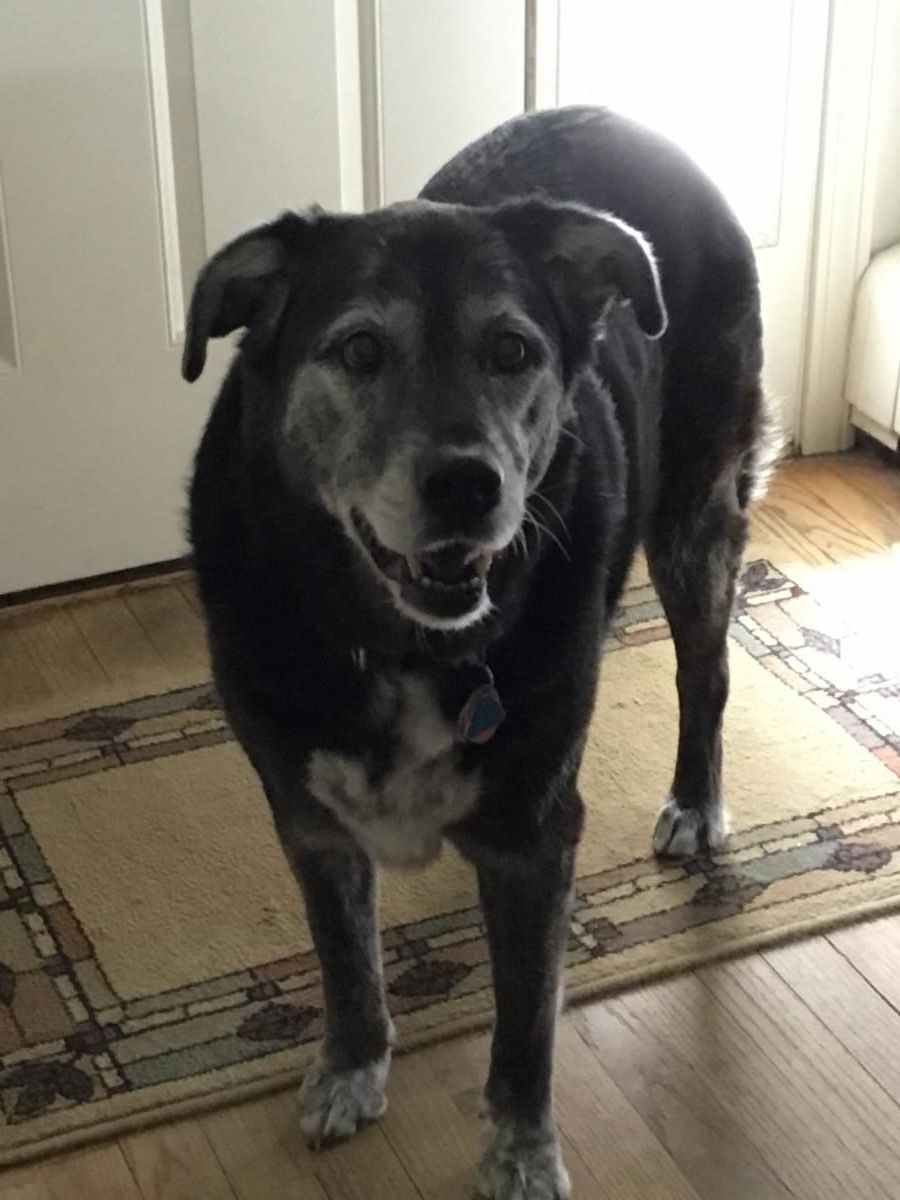 And here's Beth Silver's bunker - and, as she puts it, "my new executive director"
Looks like Steve has been temporarily replaced.

Shalom from my bunker, which is not nearly as luxurious as the other bunkers shown here. But we do have Dan with us, and the three dogs (my executive directors) are here for the long haul and really enjoying seeing so much of us. 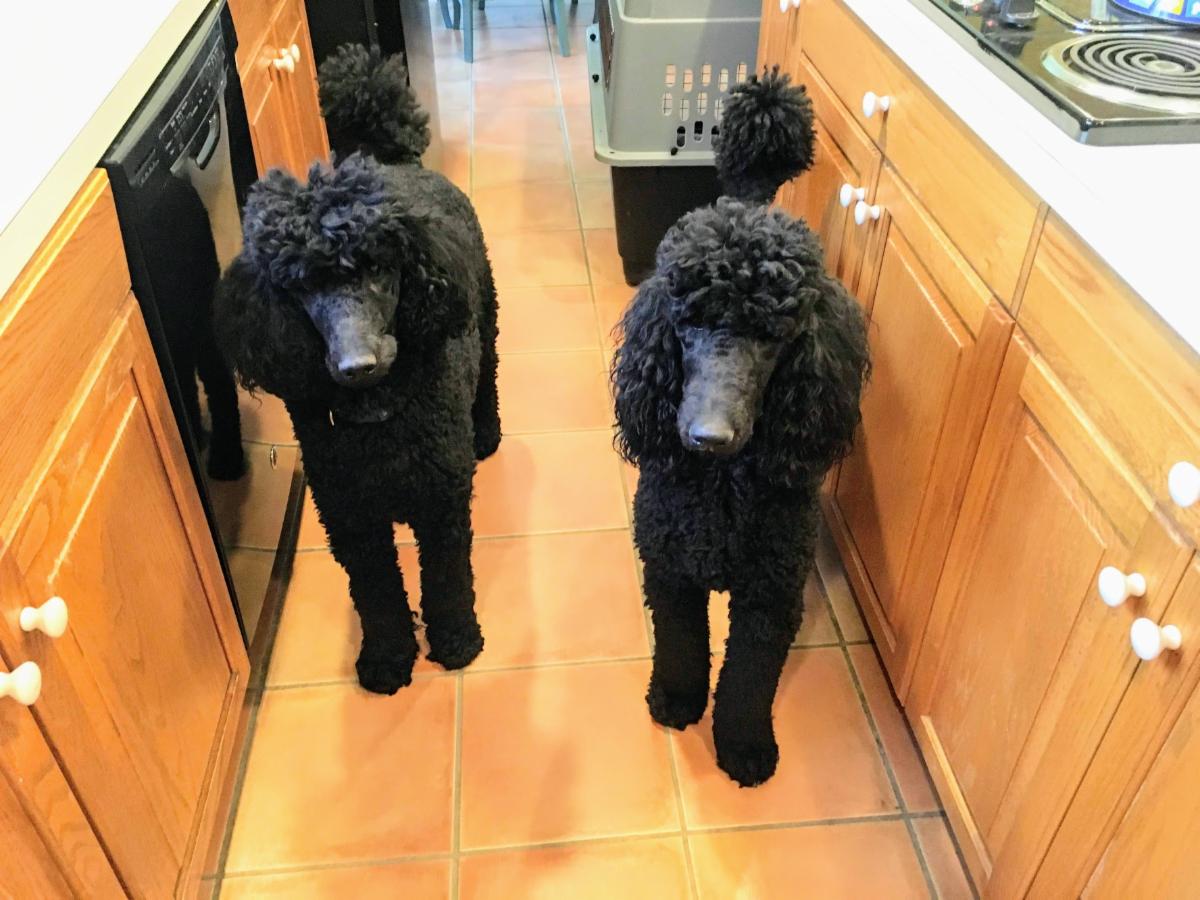 A glance at the front pages around the world this morning generates a collective urgency that is both alarming and comforting.  We realize that we are all in this together, with responsible leaders everywhere understanding the gravity of the moment. 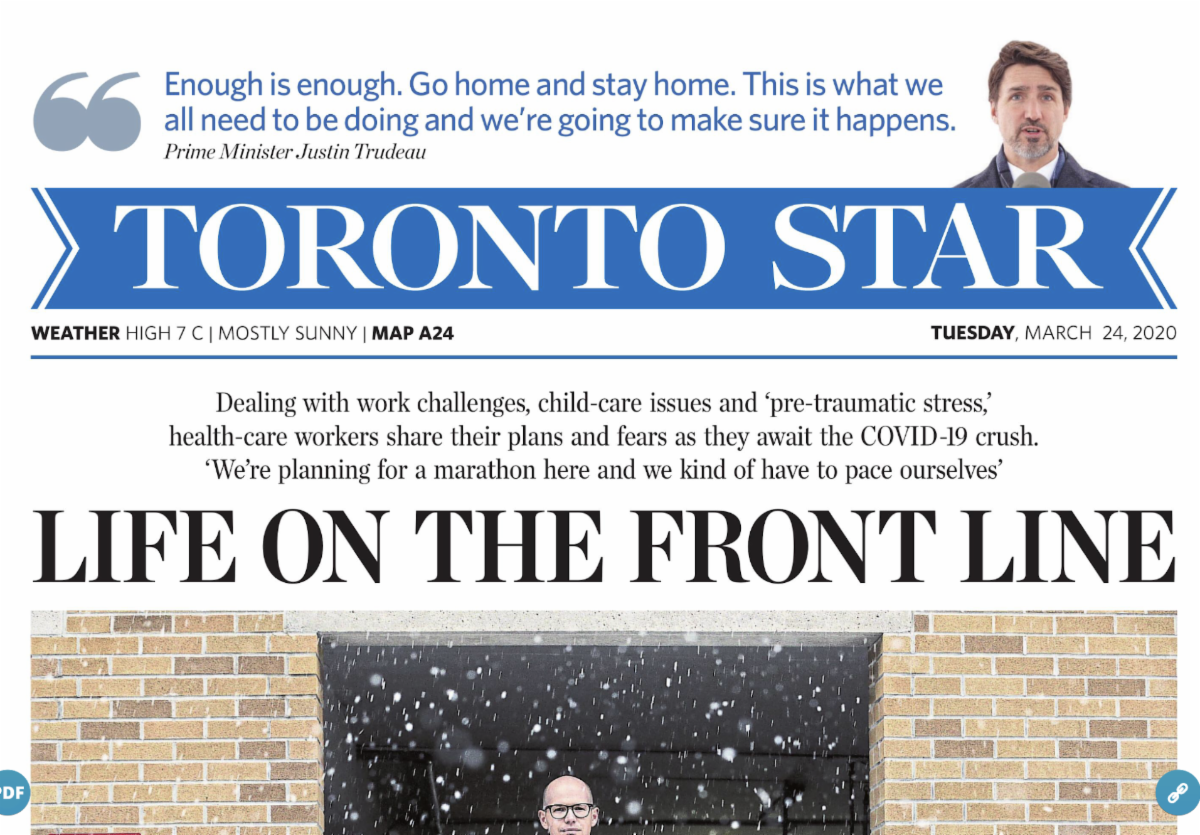 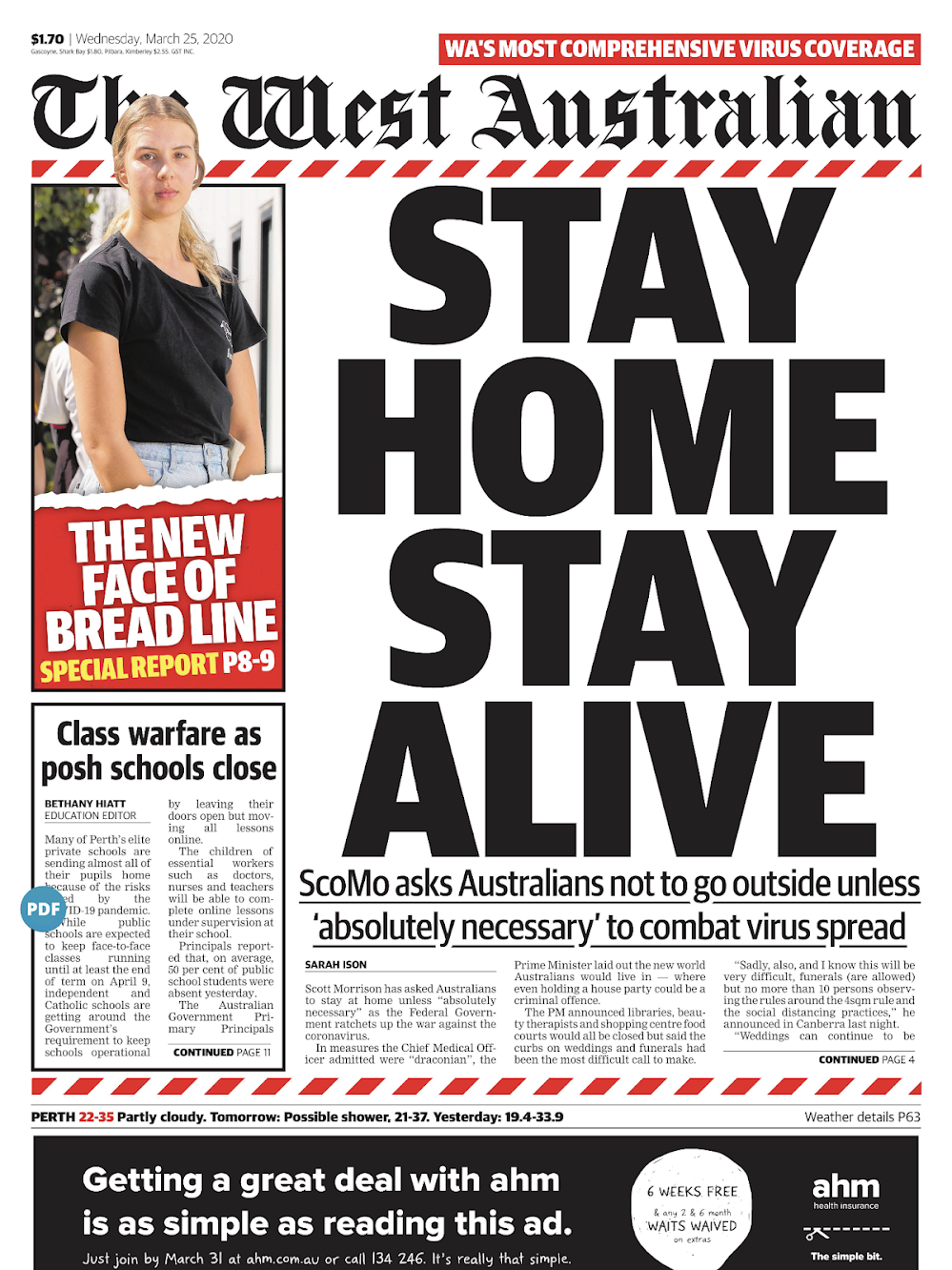 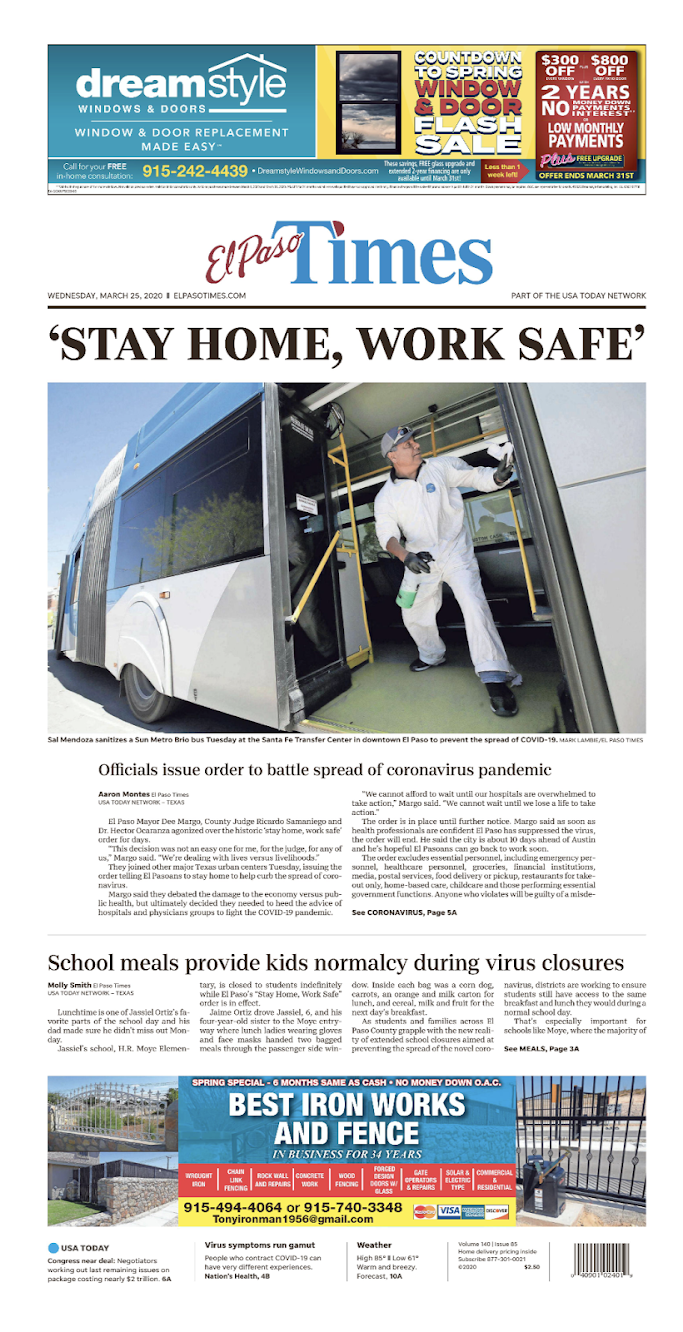 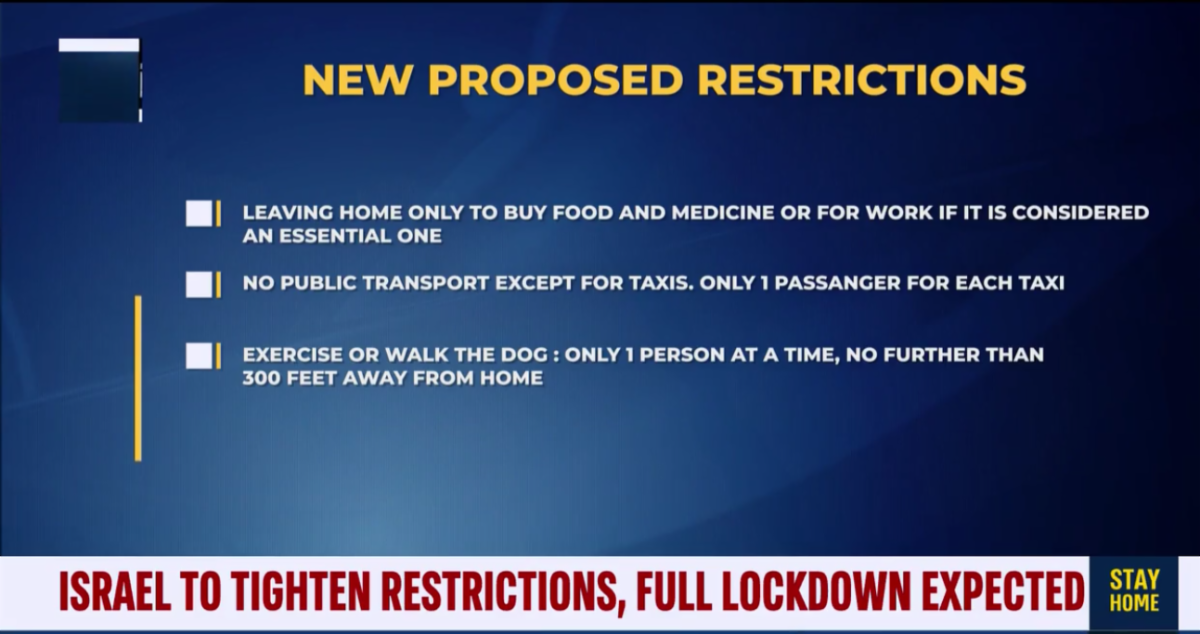 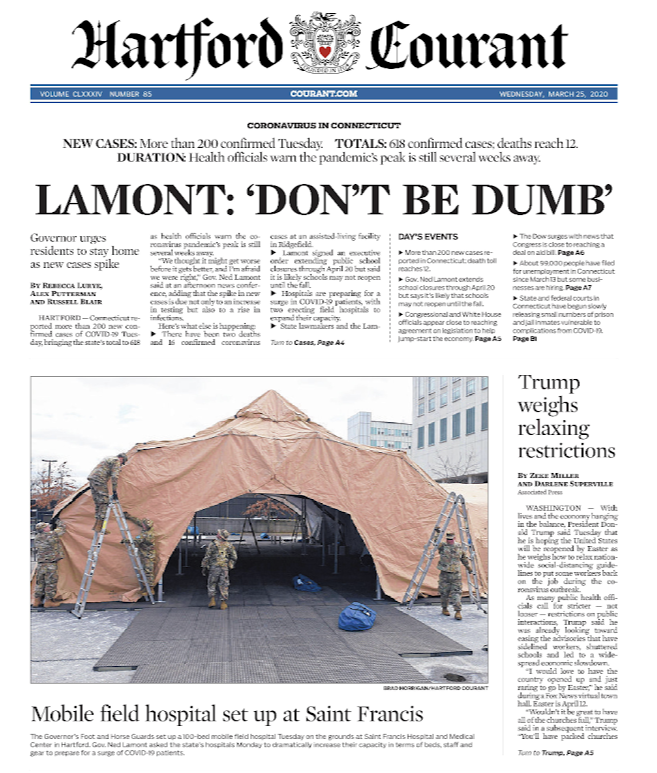 For those seeking a reminder, here are the CDC recommendations for prevention of the virus.
So how do we cope with this new normal?
-       The AJC has found inspiration in acts of kindness and decency on the part of individuals of all backgrounds and faiths, around the world and has started a campaign to share and honor these acts and even inspire more of them. The initiative is called #BeAMensch (www.AJC.org/BeAMensch) based off of the Yiddish word meaning "a person of integrity and honor"- or, put simply, a good person.
Gee, it seems to me that someone recently wrote a book about that!

Kudos to AJC for reminding us that these are times that test our souls, and that Judaism gives us tools to combat the natural urge to become insular, cynical, detached and angry.

Time to Start Thinking About Passover
We can avoid it no longer. Passover begins two weeks from today. While two weeks seems like an eternity in Coronavirus time, it's equivalent to "tomorrow" when it comes to Passover prep. One of our teens, Liav Vadel, suggested that this year we might want to "Pass-over" it entirely. He was joking, but some have been very serious about the idea. A group of rabbis in Israel petitioned the Supreme Court to declare this a Jewish leap year and put Passover off for an extra month. But that didn't fly. So we must prepare, and over the two weeks, Passover will feature prominently in these messages from the bunker. Let's start with a few here:
Rabbinical Assembly Passover Guide for 2020
How to choose a haggadah in the time of coronavirus (Forward)
Rabbis call for low-key Passover with no public celebrations, no travel (New Jersey)
Passover in a pandemic: Families on Zoom, solo seders and broken traditions (JTA)
Rabbis approve the use of ZOOM to celebrate Passover due to coronavirus(Jerusalem Post).
The ruling was made by several Orthodox Sephardi rabbis in Israel, in light of the coronavirus situation. In general, the rabbis made it clear that the solution was only to be allowed during an emergency such as this, to allow the elderly to join in the celebration in order to bring them together with their families during a crisis. On Sunday, the Supreme court denied a request to declare a leap year in light of the coronavirus, saying that there is no legal mechanism for declaring a leap year due to an emergency. The request was made after the rising concerns that, due to the coronavirus situation, it would become far more difficult to obtain the proper supplies for the celebration. The hope was that the extra month added to the Hebrew calendar during leap years would remedy the problem.
The startup We Repair.org has created haggadah inserts and additions to your table to spark meaningful conversations at your Seder.

Click here for pdf of the Four Questions commentary seen below 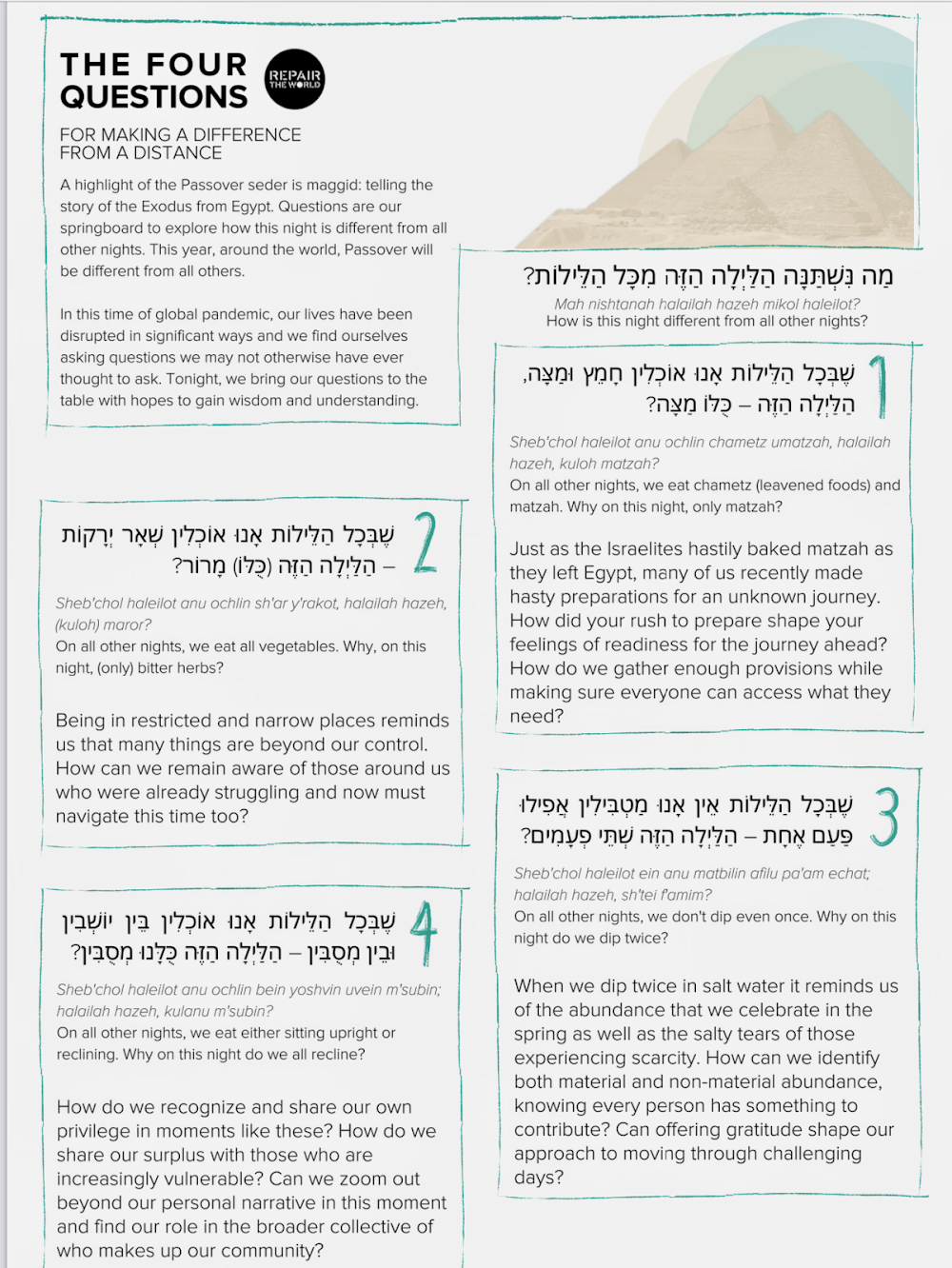 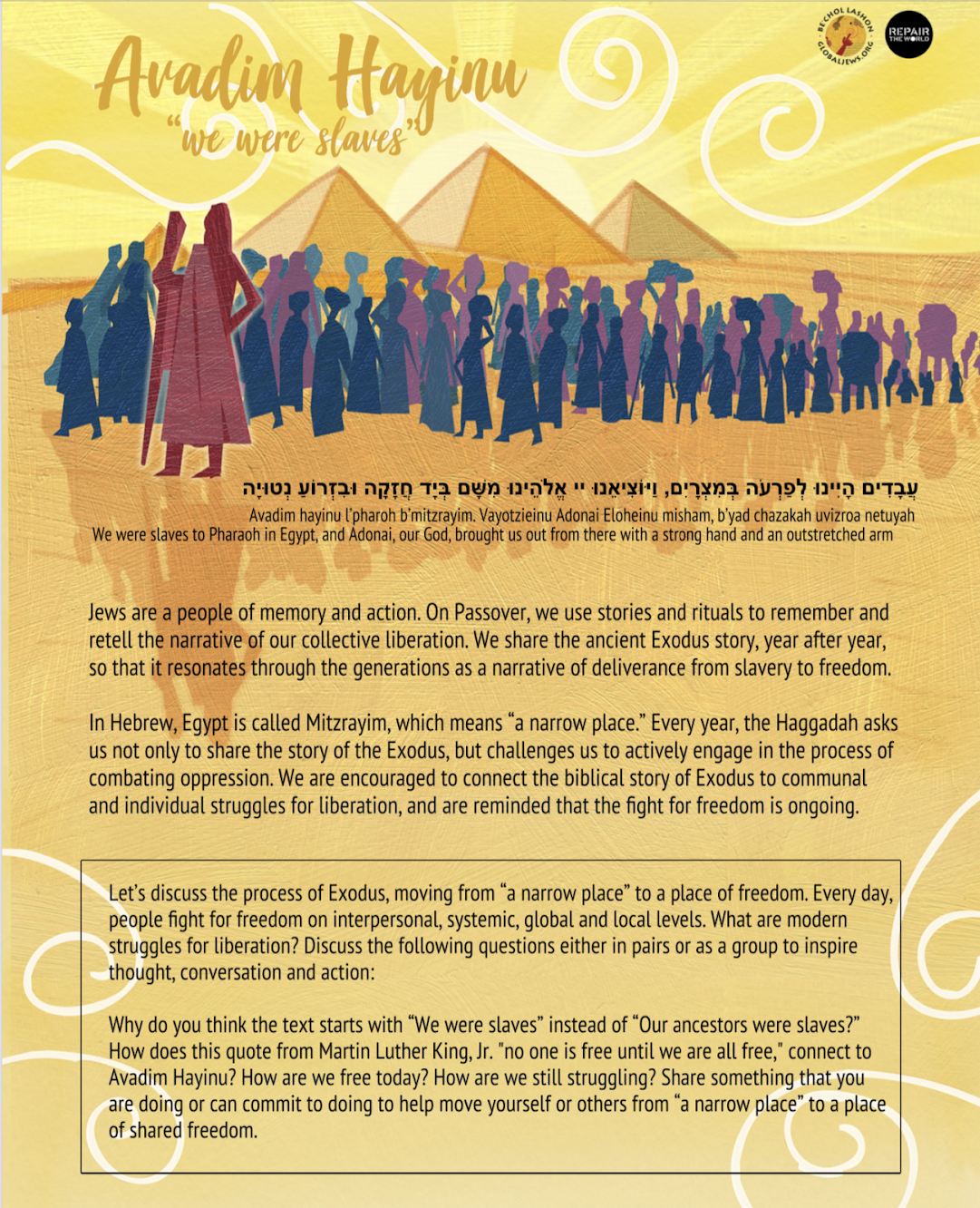 And finally, leave it to the Kiwis to lead the way in showing us how to meet this challenge... 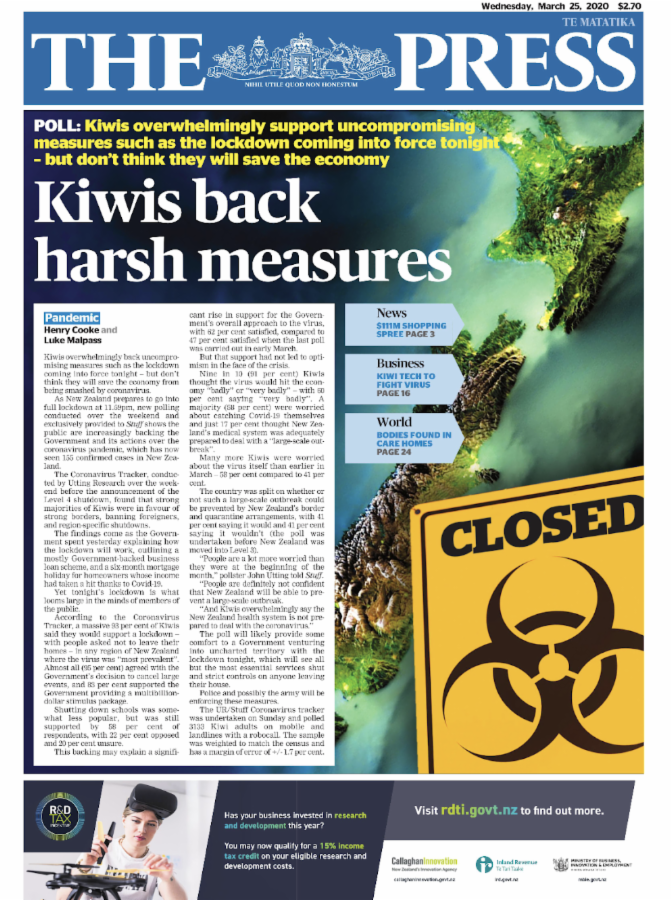 My ongoing prayers for health and blessing for us all through these difficult times,

Email ThisBlogThis!Share to TwitterShare to FacebookShare to Pinterest
Labels: coronavirus