In This Moment, by Rabbi Joshua Hammerman: June 19: Tonight: "My Journey as a Parent of a Transgender Child"; Jemimah, Job and the Grinch; A note of thanks to TBE Health Providers; Solstice Reflections 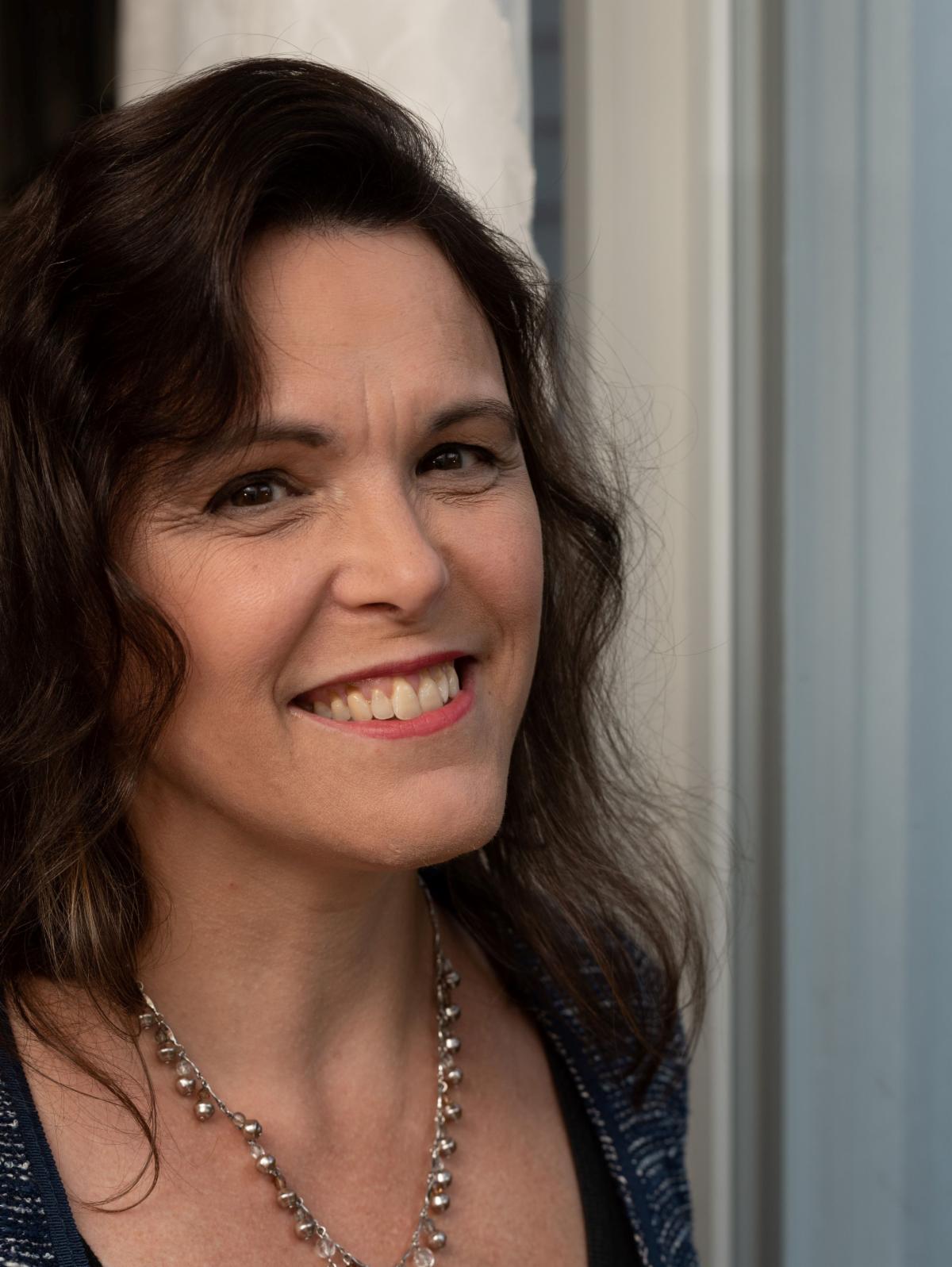 Marion Sherman Howard:
My Journey as a Parent of a Transgender Child.

This evening we will honor both Pride Month and Juneteenth - at a time of heightened awareness of the perpetual struggles as well as triumphs of two historically persecuted but proud communities.

Our guest speaker at our 6 PM service this evening will be Marion Sherman Howard, who will share her unique perspective as a parent of a transgender child who has been transitioning during this era of rapidly-evolving social policies regarding gender expression and sexual orientation. She'll describe one family's journey through transition and the true meaning of "pride" in its broadest sense.

Marion Sherman Howard is a resident of Westport, CT and is parent of two children, one of whom is her transgender son, Max Howard.  She is a Head of Marketing for Hospital Alliances at CVS Health where she leads the marketing strategy and program adoption of CVS Health programs by Hospital Systems and Provider groups across the U.S.  Marion and Chris Coogan will be celebrating their first wedding anniversary on Tuesday, June 23.

Marian is a fantastic speaker - and oh yes, her husband Chris Coogan will be our featured musician this evening with Katie Kaplan!

Jemimah, Job and the Grinch

So much about this period of time has to do with people's vulnerability.  We all yearn to feel safe.  Our three month quarantine was hardly "worth it." I'd have much preferred a shorter stay in the Rabbi's Bunker - and I'd really like to suggest that someone inform those who mock science-based safety measures that they are just ensuring that Covid will be with us for a long time to come.  It was hardly "worth it," but it was time well spent.

For within our little foxholes, our Grinchy hearts grew three sizes - and support for the Black Lives Matters marches grew by 25 percentage points. 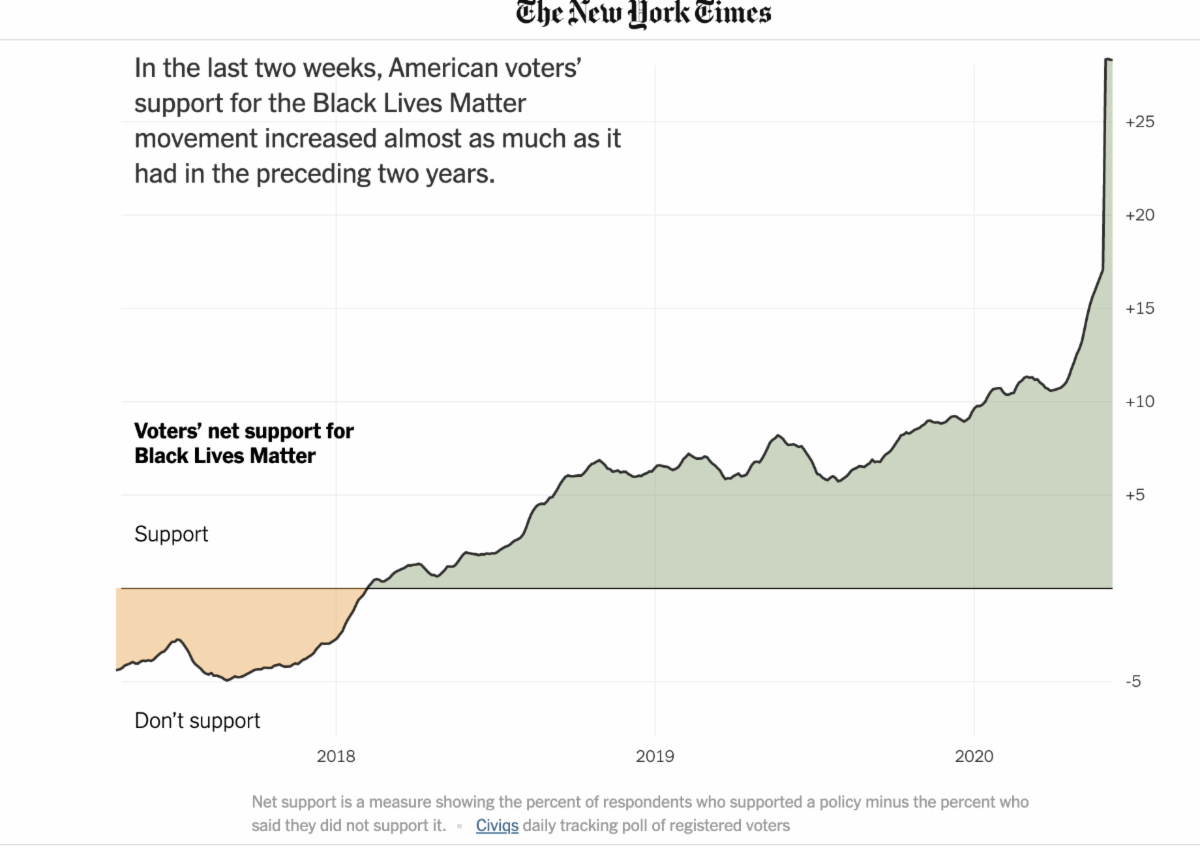 Quarantine on my couch while watching 1984 Celtics highlights and "The Good Place" and while munching on roasted almonds is hardly equivalent to Egyptian slavery.  Nor is it remotely close to the 401 years of discrimination African Americans have endured in this country.  Nor, for that matter, what LGBTQ have had to suffer both before and after Stonewall.  But these three months of captivity softened us.  In a hundred years, when people try to make sense of what has happened in the first half of 2020, I think historians will say that we were Grinched - in a good way.

The change has been real and it will be lasting.  Even Aunt Jemima could not survive it. The name Jemimah, BTW, first appears in the Book of Job, as one of the three daughters of Job, the ones who came after the disaster befell his first family.  This second set of daughters were considered the most beautiful women in the land, as if to indicate that Job was rewarded for his patience.  Let's toss aside for the moment the moral repugnance of seemingly replacing one set of kids with a "better set." In Hebrew, the name Jemimah means "turtledove."  So this name, which originated in Job's personal Reconstruction period following his unparalleled catastrophes, came to be associated in the Jim Crow era as the face of a woman born into slavery.

Now are wiping Jim Crow from the face of history just as Job's first family, which had been felled by a plague of some sort "a wind from across the wilderness," was swiftly replaced.

Replaced, but not completely forgotten.  Job's rebirth does not mean that his first family was relegated to the dustbin of history.  His original kids still appear in the best selling book of all time - the Bible.  Not bad.  But we never learn their names.

We only know their names of the second set, including Jemima, the names of Job's  Reconstruction.  And we won't forget them, but neither shall we dignify the culture of oppression by glorifying their persecution by staring at their faces on our breakfast tables.  So no more waffling about Jemimah.  After 130 years, we are doing away with this icon of servitude.

Because we remember what it was like to be a slave.

And so, softened by our lockdown, we, who first tasted freedom at the shores of the sea, have witnessed a sea change of nearly equal magnitude.

Here's something I found in today's Boston Globe.  It fits neatly into the tenor of these changed times: 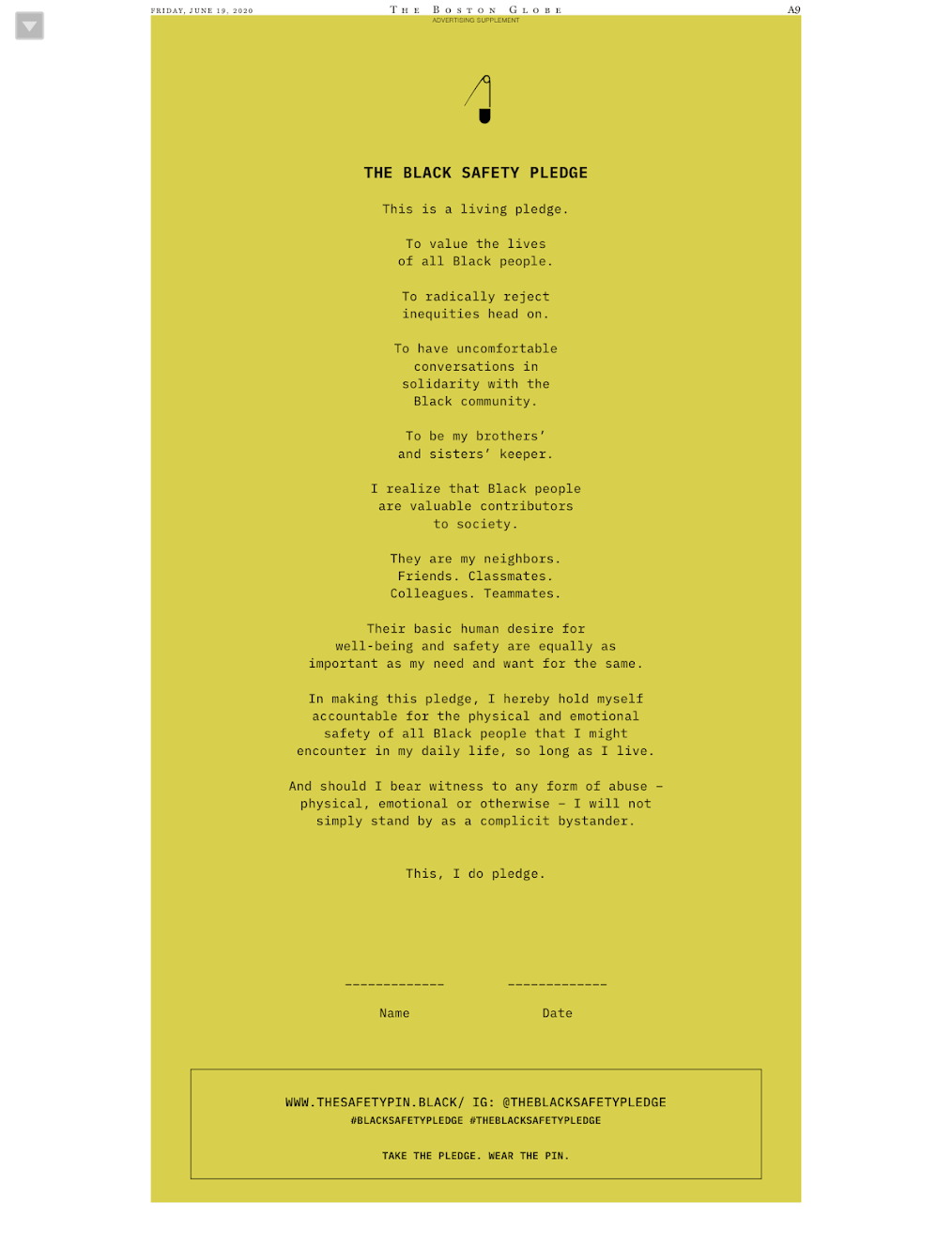 And here's a Black Lives Kaddish brought to us by the Jewish Multiracial Network.  Thank you to Beth Madison for calling my attention to it.

Here's how they introduce it:

"This Friday night, Shabbat coincides with Juneteenth, the commemoration of the official ending of mass enslavement of African Americans. In observance of this important day, and in remembrance of the countless African Americans who have been victimized and killed by ongoing racism, we are lifting up the suggestion of Black Jewish journalist Robin Washington and we are asking our friends and allies in the Jewish community-Jews of Color and White Jews, Sephardic and Mizrachi and Ashkenazi, religious and secular, in private or on Zoom-to recite a Kaddish for Black Lives during this Shabbat.
"Jewish Multiracial Network has created a special "Black Lives Kaddish" to reflect on this moment. Depending on your practice, you may choose to recite it along with the traditional Kaddish or, after candlelighting, join us in reciting Psalm 31 (traditionally said to ward off hatred) on this special Juneteenth Shabbat. We ask that you share this ask with your networks, friends and contacts throughout the Jewish Community so we may all come together to give appropriate honor to those we have lost. May their memories be a blessing." 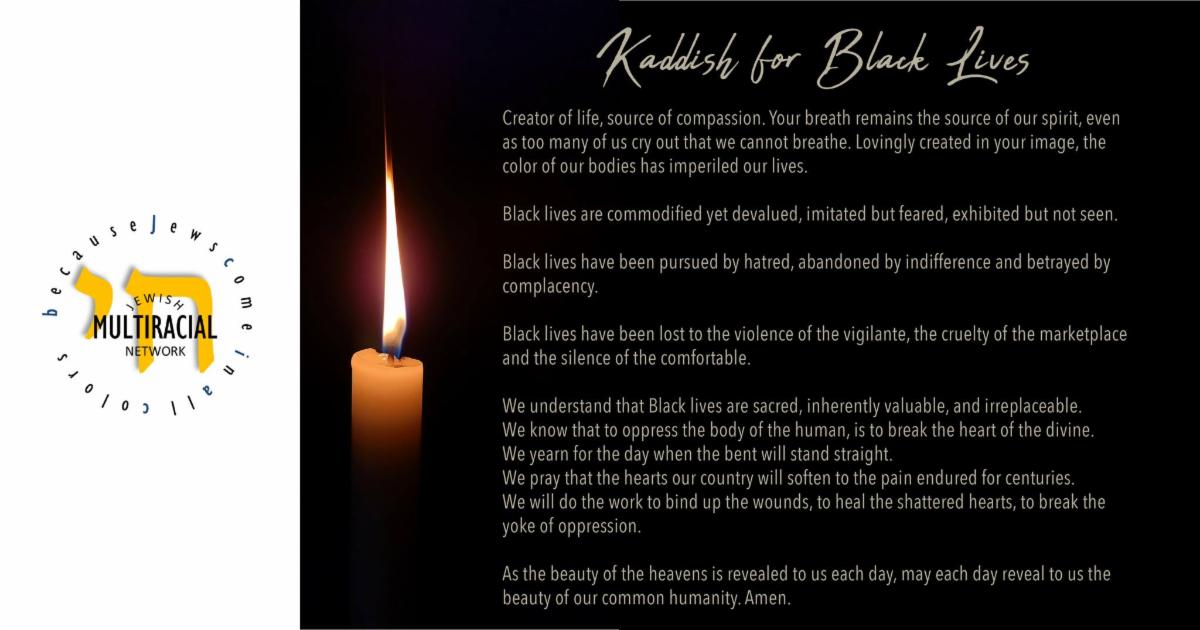 Nazi triangle post the latest in a series of seeming dog whistles (Forward)
The ad, which was removed from Facebook, featured an inverted red triangle - used by Nazis to denote political prisoners in concentration camps. Its first sentence had 14 words, which could be a reference to the 14-word credo of white supremacists. And the campaign ran it 88 times. "H" is the eighth letter of the alphabet, and white supremacists use the number "88" to mean "Heil Hitler."

Ata Chonen: A Prayer for Wisdom If we lack powers of wisdom and discernment, no other request of God really matters.(Erica Brown - MJL)

I Officiated A Zoom Funeral. Here's What I Didn't Expect. (Huff Post) I was responsible for one of the most sacred moments in a person's lifecycle, and I had to hand over my control to my laptop.

Cooking Up Stereotypes: This Aunt Jemima pancake flour ad ran in the Forward. 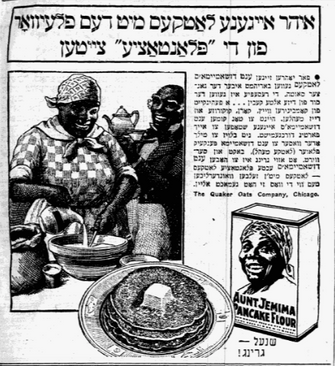 In the 1920s, the Hanukkah latke collided with one of America's most enduring convenience foods: Aunt Jemima's instant pancake mix. Aunt Jemima - which came in two versions, wheat and buckwheat - was marketed to Jewish cooks as a quick and easy alternative to their old-fashioned yeast-risen pancakes. But while offering convenience, Aunt Jemima gave Jewish immigrants a crash course in racist iconography. An advertising persona dreamt up in 1893 by a Chicago milling company, Aunt Jemima was modeled after a popular minstrel show character which in turn was inspired by enslaved plantation cooks. Exactly what Jews made of the kerchiefed woman who smiled at them from Yiddish language ads is impossible to know, but the Aunt Jemima brand was indeed welcomed into immigrant kitchens, replacing a venerable Jewish food with its modern, American counterpart.
Paul Winter's 25th Annual Summer Solstice Celebration - If you are up at 4:30, be inspired and calmed by one of the great New Age musicians.  This concert is being broadcast universally for the first time.

"This is the week toward which the year has been straining. The fullness of light transforms awareness. Each day prolongs itself. Time is reinvented, as the present tense comes into its culmination.
Approaching this week's summer solstice, Earth seems to slow in its turning. The sun loiters. Evening slides luxuriously into night, which reliably cuts itself short with dawn. All of nature tugs at human consciousness to say: Notice this. And so you do.
This morning, you put the newspaper down and let your eyes go to the window. A red-breasted bird perches on the ledge, watching. The wall of ivy shimmers with pale ripeness. Sunshine slants into the yard, and motes of dust move in the cone of the breeze. Ferns lounge in the shade. Fresh-green branches scratch at the sky. Leaves glisten. For a moment, you attend to the way the world welcomes the longest days of the year. Your part is to take it in.
But the newspaper makes demands of its own. How to square time's invitation to contemplation with the conscription of public sorrow? Anguish defines the age.
Humans must always balance the tension between grave public demands and intensely personal preoccupations. There is reading the newspaper, and there is letting the mind go out the window. But the golden twilights of June want attention paid. You remind yourself that this week's display is of ingenious movements of the planet that you otherwise take for granted. Ironically, the solstice is defined not by intimacy, but distance, for now the sun is as far as it gets from the celestial equator. The resulting length of days points to earth's trustworthiness, for the movement away carries the promise of return. When has the dance of earth and sun ever broken that commitment?
And when has astronomy ever done more for the lifting of the spirit? The suspended moments of time's zenith are sacraments of life's goodness. Haste, duty, and the hassles of work have no admittance here. In the coming week, you will remember with love all those with whom you have found your ease in such suspension -- companions of summer. And in recalling such release, you will look for more. Ironically, this is how you deepen your feeling of responsibility for the world. It is the one thing you have learned: to be at peace is the way to prepare to work for peace.There is no coping with the heartbreak of the human condition without a nurtured sense of the heart when it is full. It is the business of the summer solstice, through the weave of memory and desire, to nurture that plenitude."

And my favorite summer poem... 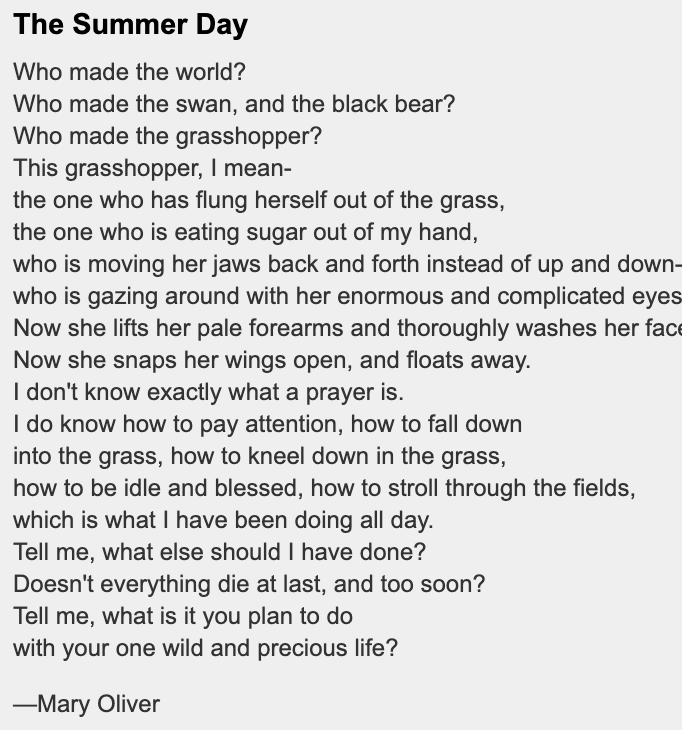 A note of thanks to TBE Health Providers... 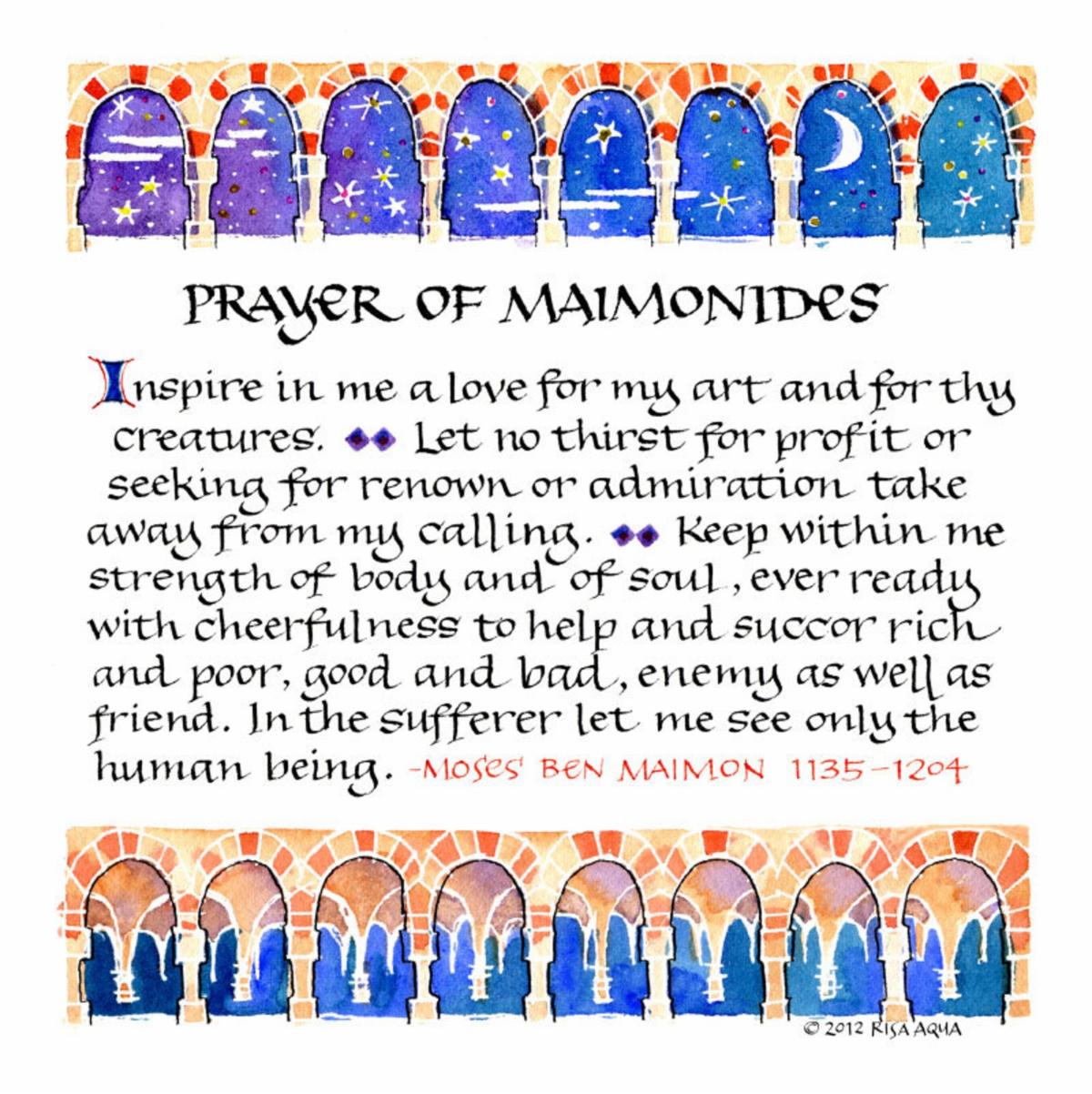 And finally, as the we now entered our fourth month of the coronavirus, it's nice that some people who have been working so hard to save lives have had a small chance to come up for air.  Their work is by no means done, but it is always important to thank them by name.  And so here are the names of TBE congregants who work to save lives, both human and animal, and preserve health, both physical and mental / psychological.  I'm sure we are missing some, in which case, I apologize and pleaselet me know who.  Also, please send me the names of people who volunteer regularly in areas of health.  Your service is invaluable and we want to include you.  We have 114 health professionals on this list  - which gives me great confidence when - at a time to be determined - we all can gather back in the same room and someone invariably asks, "Is there is a doctor in the house."  How about a hundred!