In This Moment, by Rabbi Joshua Hammerman: June 12 - When We Turned Within; Honoring our Graduates; At NASCAR on Flag Day, One Flag Won't Fly - Why Deuteronomy Would Agree; How We Can Be the Change 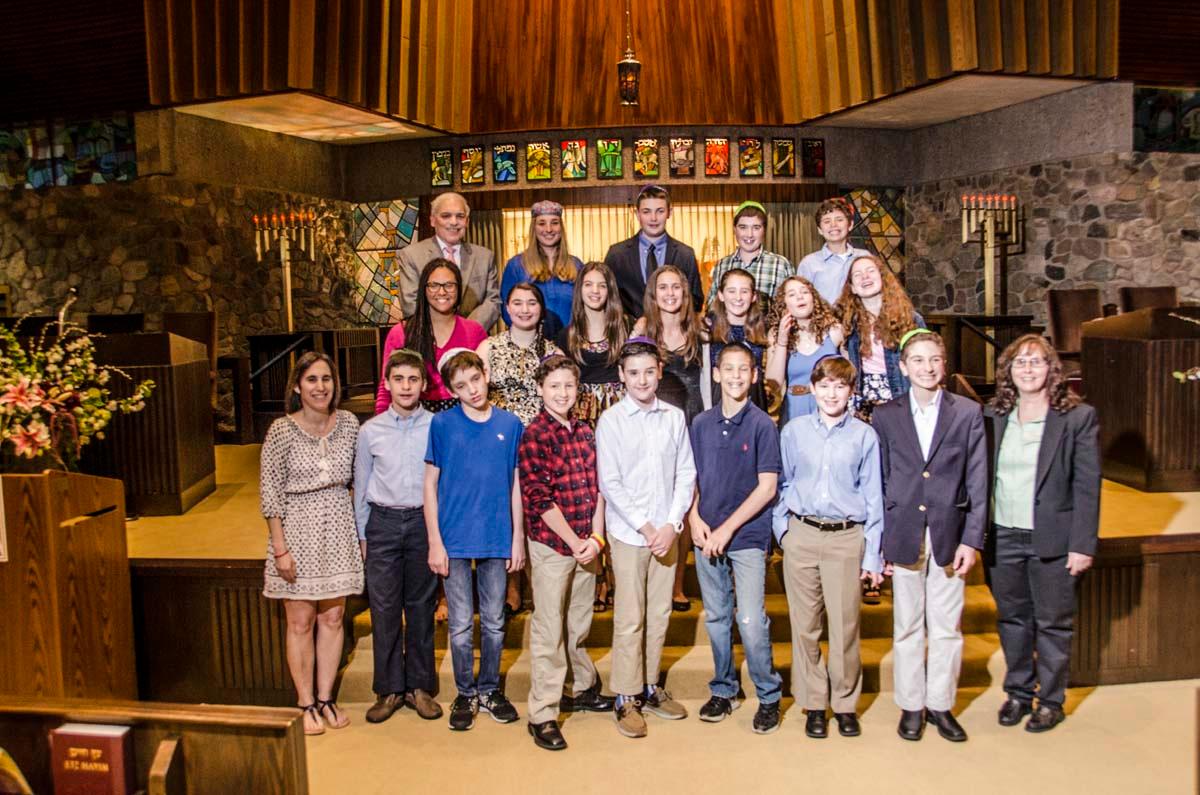 Tonight at 6 we'll be sending off our graduating 12th graders with a special blessing.  The picture above includes this class when they graduated from Hebrew School in 2015.  It doesn't include our day school graduates, who are every bit as much a part of the TBE family, but you'll see some of them below... 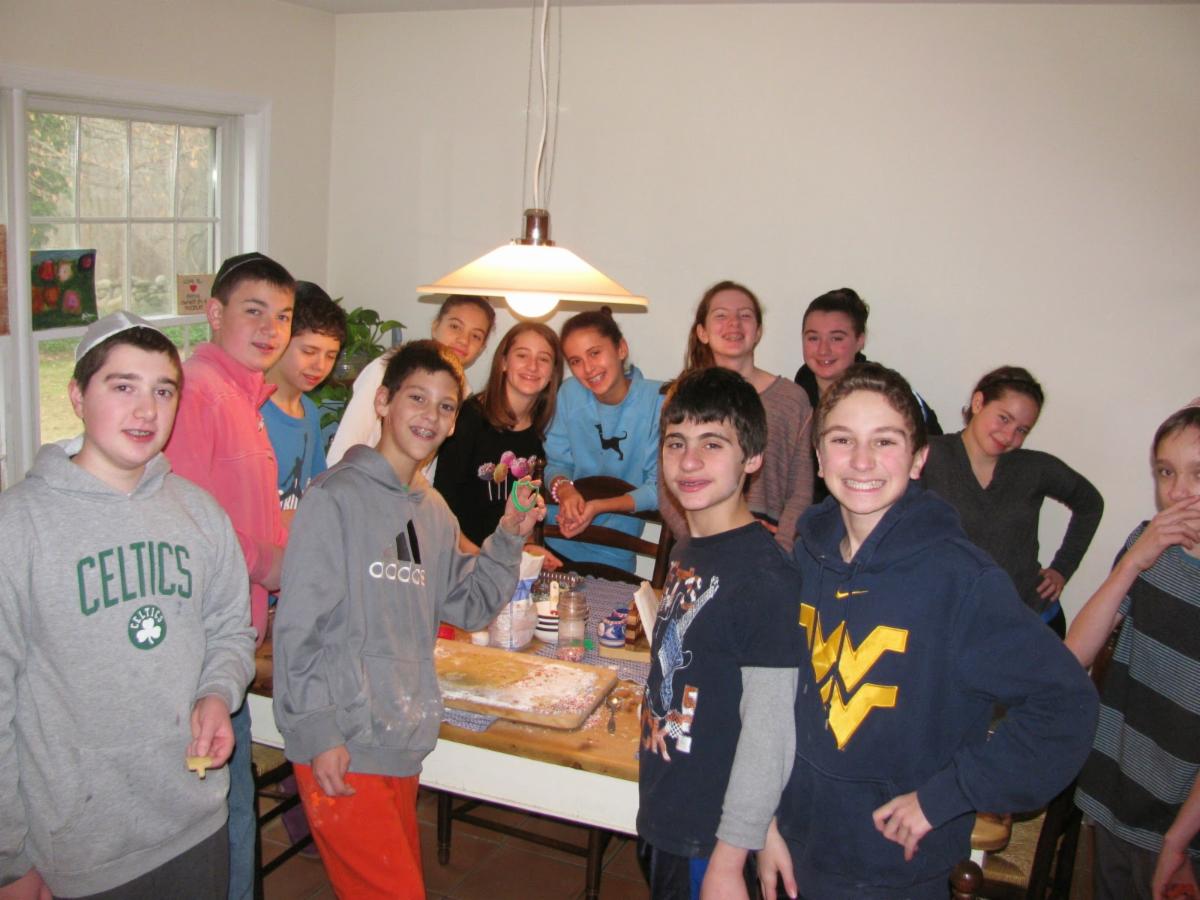 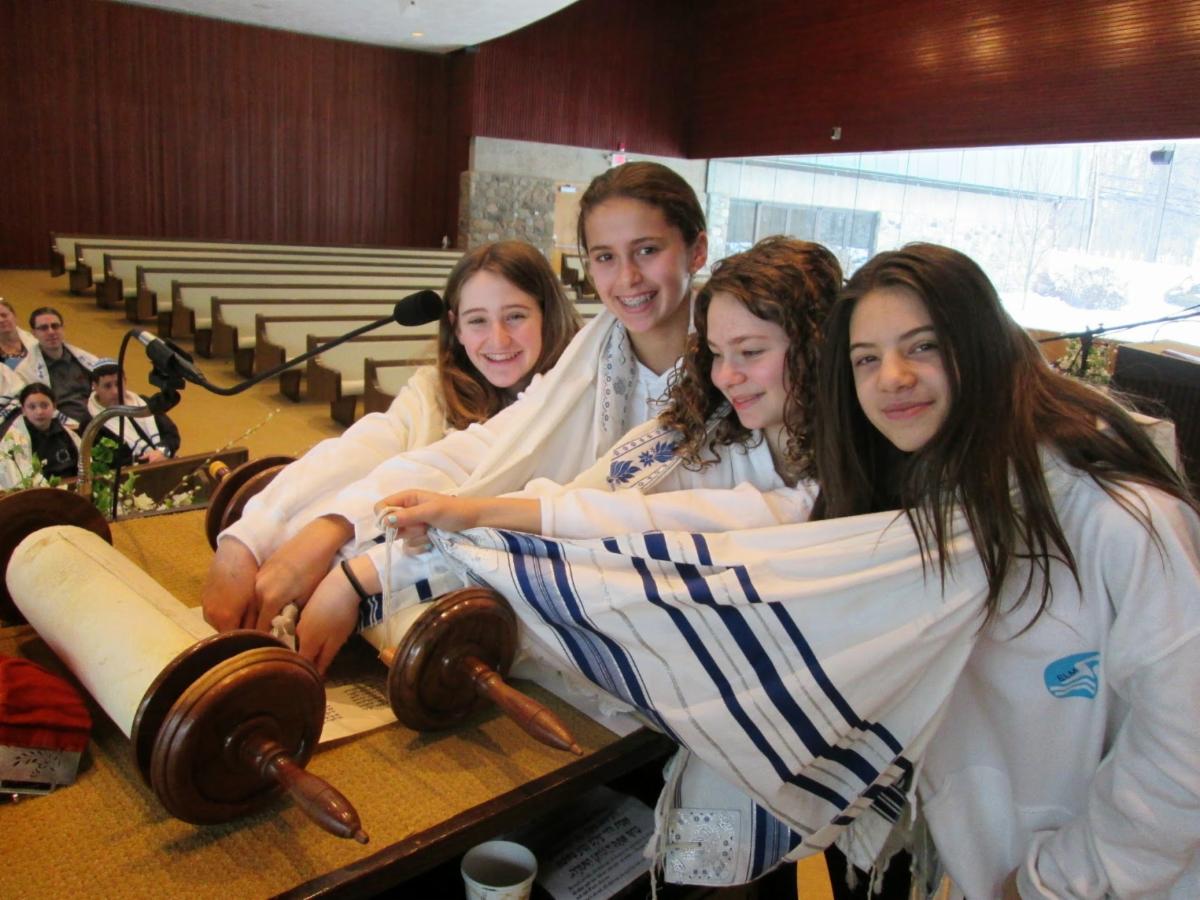 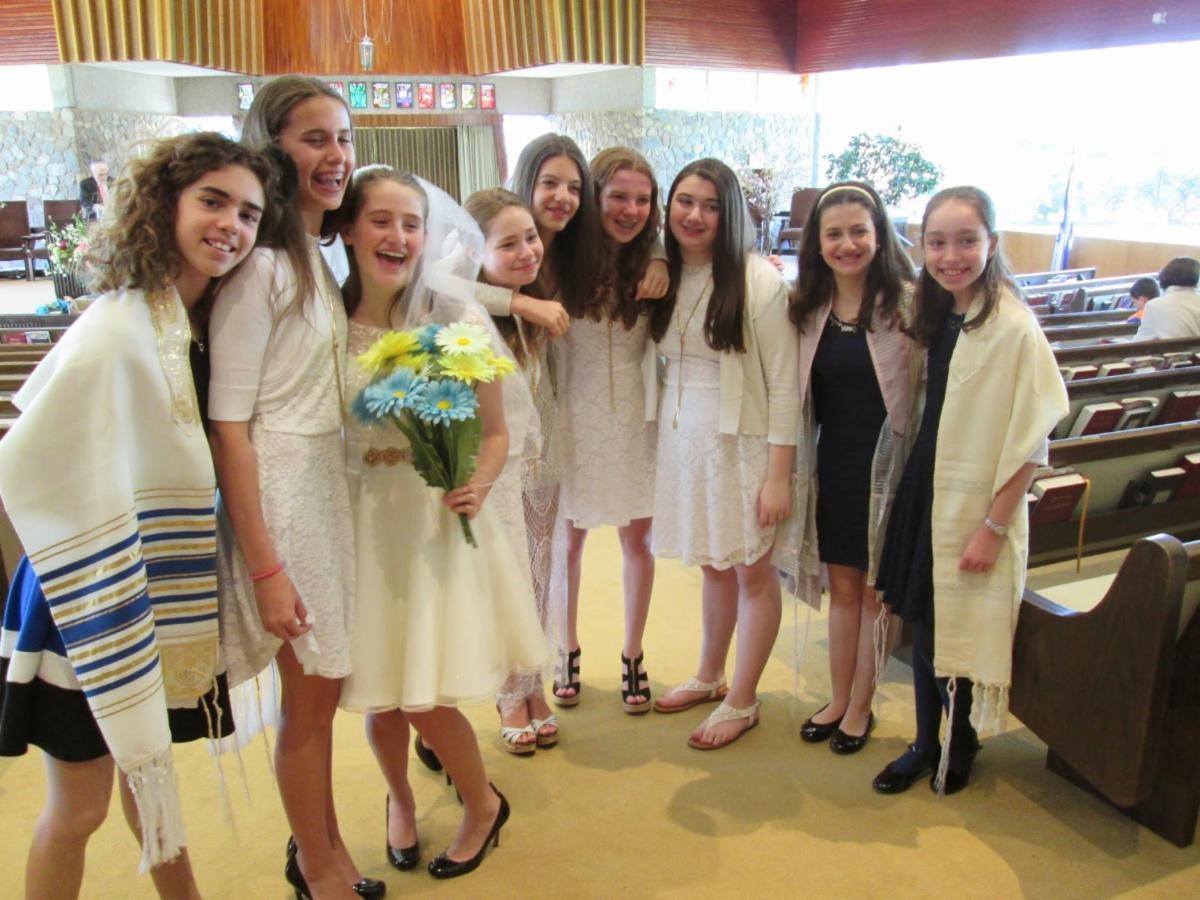 For those of us having trouble coping with the craziness,  Psalm 118 brings us out from the depths. Read about it here.  Also of interest this week, see how Jews' close connection to healing, both as patients and physicians, is ancient and rooted in both theology and history.

Given that the coronavirus is still an enormous presence and threat, even as it wanes slightly here, read this updated information sheet from the city of Stamford. 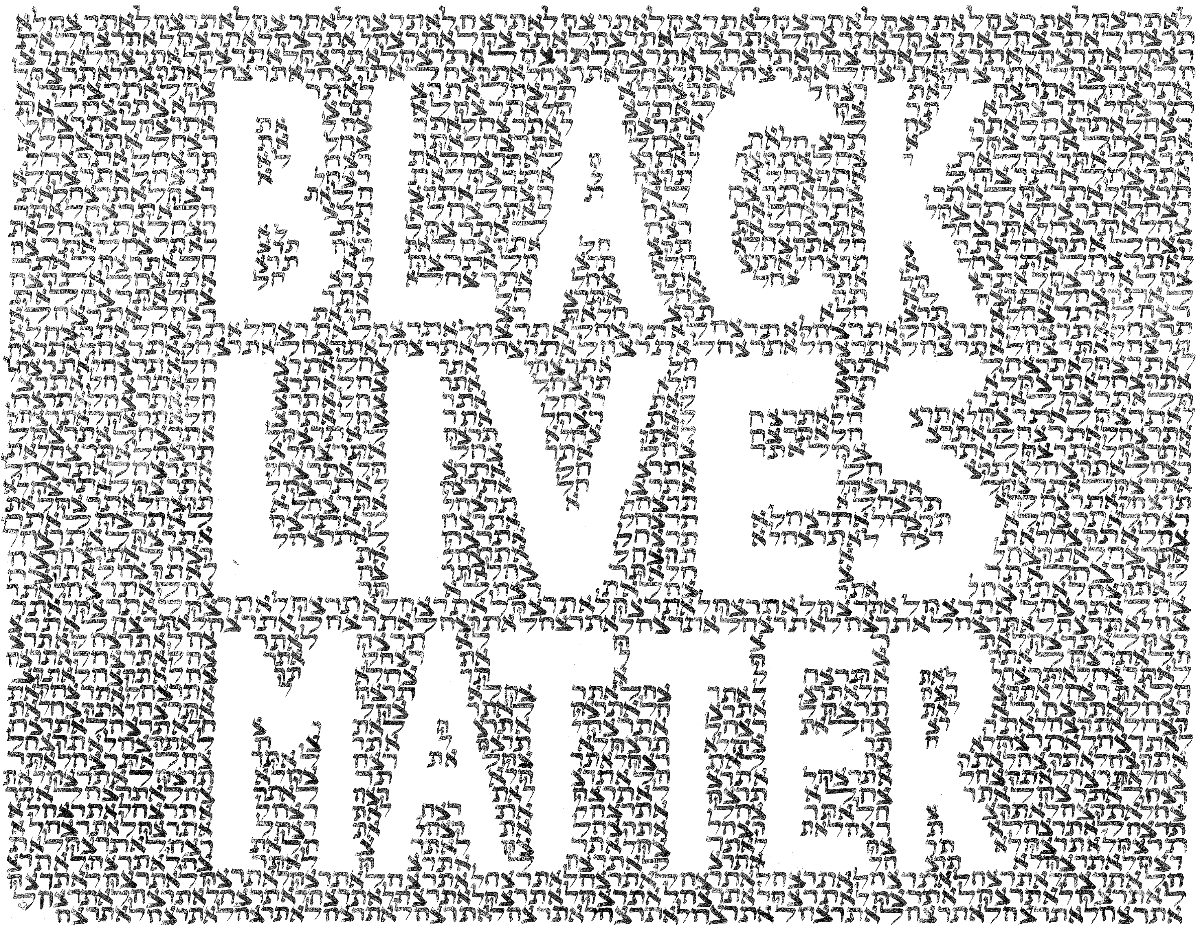 Inspired by last week's talk by Rev Michael Christie, we have been focusing on how we can be the change.  We are putting together a standing committee to address issues of social justice.  Meanwhile, this article, "Ways Your Congregation Can Act Now for Racial Justice," has a number of good ideas.  And I've added to my summer reading list a highly recommended book (by Rev. Christie and others - a National Book Award winner), Stamped from the Beginning: The Definitive History of Racist Ideas in America, by Ibram X. Kendi, along with the author's new book, How to Be an Antiracist.

As we attempt to establish our place in this conversation, read how  one Jewish organization (the ZOA) has not been so helpful.   Also, see this important op-ed, The Palestinian appropriation of black pain (Times of Israel).

From JTA:Black Jews' response to George Floyd protests, in their own words
From JTA: Three Jewish takeaways as unrest from pandemic and George Floyd killing strike America

From Kveller: 13 Jews of Color to Follow on Social on Social Media Right Now (13 Black Jews who are spearheading discourse on race and Judaism on social media)

Also from Kveller, learn how this iconic Hebrew/Yiddish song became an anthem for African Americans. The song is "Eli Eli," not the song based on the Hannah Senesh poem, but the one based on Psalm 22, a verse that featured also in the New Testament, "My God, My God; why have you forsaken me?" This is a fascinating story of how African American and Jewish cultural experiences intersect. It's also of special interest to me because my dad knocked it out of the park with his version!

See also these suggestions on how we can be the change, from Repair the World:
LEARN
TAKE ACTION
-------- 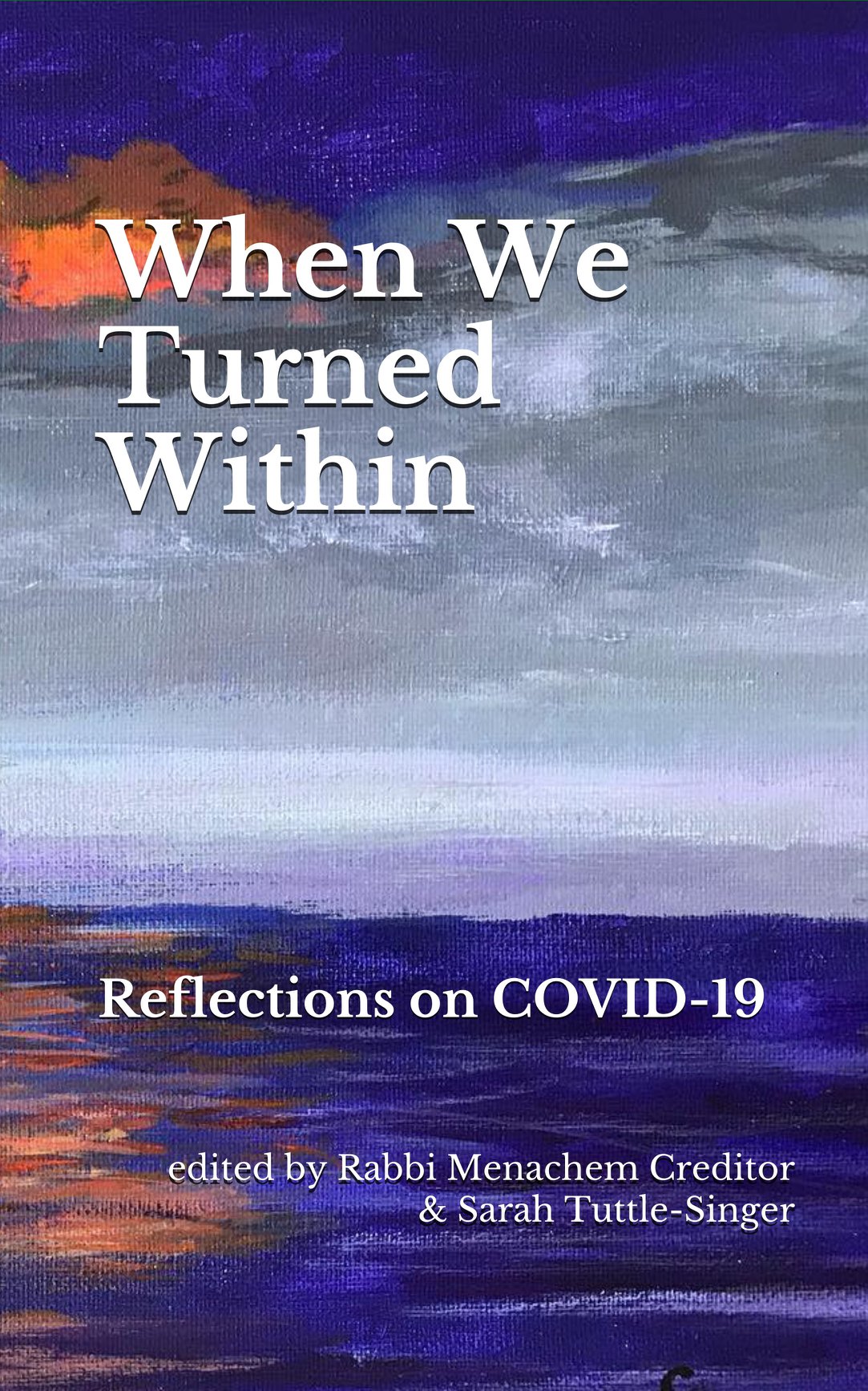 When We Turned Within: Reflections on COVID-19
Edited by Rabbi Menachem Creditor and Sarah Tuttle-Singer
Foreword: Rabbi Bradley Shavit Artson
Cover art: Rabbi Karen Byer Silberman
with Essays, Prayers, and Poems by 165 contributors from around the world
paperback: amazon.com/dp/B089TS37YP
Kindle version here: amazon.com/dp/B089WGB8ZZ
For the full table of contents, click here: tinyurl.com/WhenWeTurnedWithinTOC
Special landing page designed by Reverend Ngozi T. Robinson: www.whenweturnedwithin.com
"This book is much more than a record of loss. It is a collection of reflections, prayers, and poems of many, many individual souls who collectively tell the story of right now with depth and heart and startling brilliance. On these pages you will find honest testimony of a very difficult time on our planet. Be inspired by these voices and see patterns emerge, feel the pain and longing and hope and faith and frustration and loneliness and transcendence of each contribution. When We Turned Within will help you believe once again that all people share a common humanity, that our souls bind us together, that a better day is possible."

For the first time ever, AJC will be holding a Virtual Global Forum from June 14-18, 2020. To make this online event accessible to all, the full program will be available free of charge and can be accessed from any computer, tablet, or smartphone.

More exciting names and sessions will be announced in the coming days.
This event is an opportunity to explore the most important issues facing the Jewish people and the world, including the rise of antisemitism and hate in the era of the coronavirus, the 2020 U.S. presidential election, Israel's quest for peace and security, and the future of the transatlantic relationship.

More information can be found on the AJC Virtual Global Forum webpage at AJC.org/GlobalForum. People can sign up now to receive an update when registration opens.

At NASCAR on Flag Day, One Flag Won't Fly: Why Deuteronomy Would Agree

This Sunday, on Flag Day (and everyday from now on), the Stars and Bars of the Confederate Flag will be banned. In the the absurdity of the past three months, this may be the one headline that most indicates the shocking changes that are occurring in the country.

And somewhere, King Josiah is smiling.

In Deuteronomy 12, the Torah's zero-tolerance policy regarding idolatry is revealed.
And ye shall break down their altars, and dash in pieces their pillars, and burn their Asherim with fire; and ye shall hew down the graven images of their gods; and ye shall destroy their name out of that place.  Deuteronomy 12:3
For the Deuteronomist and his ilk, the concern was that a divided kingdom had forged a distorted culture, one that strayed from the old, unifying stories and practices.  Deuteronomy reflects the thinking of King Josiah of Judah, who wanted to strengthen Jerusalem's position as the capital, so that the temple would be unquestioned in its supremacy over other so-called sacred places.
During the period when the nation was divided, which began after the death of King Solomon, there were two capitals, Samaria in the north and Jerusalem in the south.
They were geographically close together, like Washington and Richmond, but culturally worlds apart. The tribal nations of Judah and Israel each had their own heroes, cultural touchstones and religious practices.
Although the northern kingdom of Israel was destroyed by the Assyrians in 721 BCE and its ten tribes dispersed forever, old customs died hard - in fact, they spread southward.  So when Josiah took over Judah half a century later, his country was not fully unified.  The remnants of Israelite worship remained, as was the temptation to decentralize worship, moving it away from the temple and Jerusalem.  The reforms of Josiah, as made clear in these verses, changed everything.
It's time for a similar reform here in America.  It's time for the idols of the Confederacy to come down.
I always found the nostalgia for the Confederacy amusing, if misplaced.  But I was never a descendant of slaves having to look at a symbol of my great grandparents' oppression while heading to work every day.  The Confederate flag was somewhat troubling to me, but no more than the bottle of Aunt Jemima syrup I gleefully poured onto my pancakes in the morning. Little did I know that the good auntie is actually a racist icon, simultaneously nostalgic and sinister.
Maybe, I thought, it's not so bad to allow defeated populaces to maintain a little of their heritage so that they might also hold on to a modicum of pride.  Let those southerners rail about the damn Yankees and gain some vicarious revenge in the annual Blue-Gray Football Classic (which disbanded in 2002).  And, OK, let them have a flag and a few statues too.
As a Jew, I know all about the need for any group to be allowed the pride of maintaining peculiar customs and celebrating heroes.  I also know how offensive it is when your neighbor's heroes are, for me, terrorists.  Many Jews feel the pain that many African Americans feel regarding the Confederacy when we see Palestinians naming city streets for terrorists who have caused us so much pain. I'm sure others feel the same way about the glorification of former Irgun and Stern Gang members in Israel cities.
But time can heal lots of wounds. There was a time when David Ben Gurion so hated Menachem Begin that he refused to call him by name. But now the two exist on maps, side by side - we can take the Begin Expressway on our way to Ben Gurion Airport.  And American tourists can walk down a Jerusalem street named for former arch enemy King George  (IV, not III, but who still calls out to us as we exit the city, "You'll be Back!").  Hey, there's even a statue to Benedict Arnold in Saratoga - sort of.  When it comes to municipal memorials, the general rule until now has seemed to be, "forgive and forget."
One could easily fall into Donald Trump's slippery-slope line of thinking.  Yes, George Washington and Thomas Jefferson owned slaves and did some repugnant things, but we don't yearn to destroy their graven images, though they are, in fact, graven.  Yes, political correctness run amok could poke holes in many of our myths, the statues' defenders say.  So what's such a big deal about Jefferson Davis and General Lee?
And Christopher Columbus - he's an entire culture war unto himself waiting to happen - and with protesters taking aim at his statues in Boston and Virginia this week, it's happening.
The distinction between heroes and villains can be dulled by nostalgia, sweetened by sentiment and blurred by the passage of time.  It all can get so confusing and complicated.
Which is exactly what feeds the narrative of the extremists. They rely on our equivocating, our hemming and hawing, to build up their idols, fortify their symbols and corrode our culture.
Despite all the pain they cause, perhaps the statues of Confederate leaders could have remained standing in some location, like those images of a discredited Napoleon in Paris, or those statues of former Soviet leaders now guarding toilets in Tallinn, Estonia, or in Israel, several busts of Emperor Hadrian who in the second century slaughtered hundreds of thousands of Jews, banned circumcision, and rebuilt Jerusalem as a pagan city.
But any chance for tolerating even a ridiculed presence of Confederate icons became impossible the moment that the Alt Right draped itself around the stars and bars as the "true defenders" of the Confederacy.  When that happened, at that very instant, this thing was no longer about nostalgia, Aunt Jemima, Uncle Ben, Rhett Butler, Auntie Mame and the Little Rascals.  It was no longer cute and sentimental.

It was about potent, living imagery, symbols not of lovely old Dixie, but of whips, hate, murder and a racist ideology that still thrives in very dark places.
Whatever they were before David Duke embraced them (and there is evidence that they were symbols of White Supremacy from the start), these cultural symbols are now dangerous idols that threaten the unity and moral fiber of the American Dream.
There is no more banjo on my knee.  It's more like an infection.
Josiah had it right.  Even though the Israelite north had been destroyed many years before, its subversive legacy needed to be crushed completely.  And in America, where racist hate refuses to die and is currently, shamefully being nurtured at the highest levels, the same now goes for the symbols of the Confederacy.  General Lee might have been an honorable gentleman in his day, but he and his flag are now a wholly owned subsidiary of the KKK.
Sorry, southerners.  I really am.  But your symbols have been stolen by the Nazis. They were always subversive, but now they've been stained irreparably.
The graven images need to come down, now.