From the Rabbi's Bunker: June 1: Constructive Outrage; the Sound of God's Name 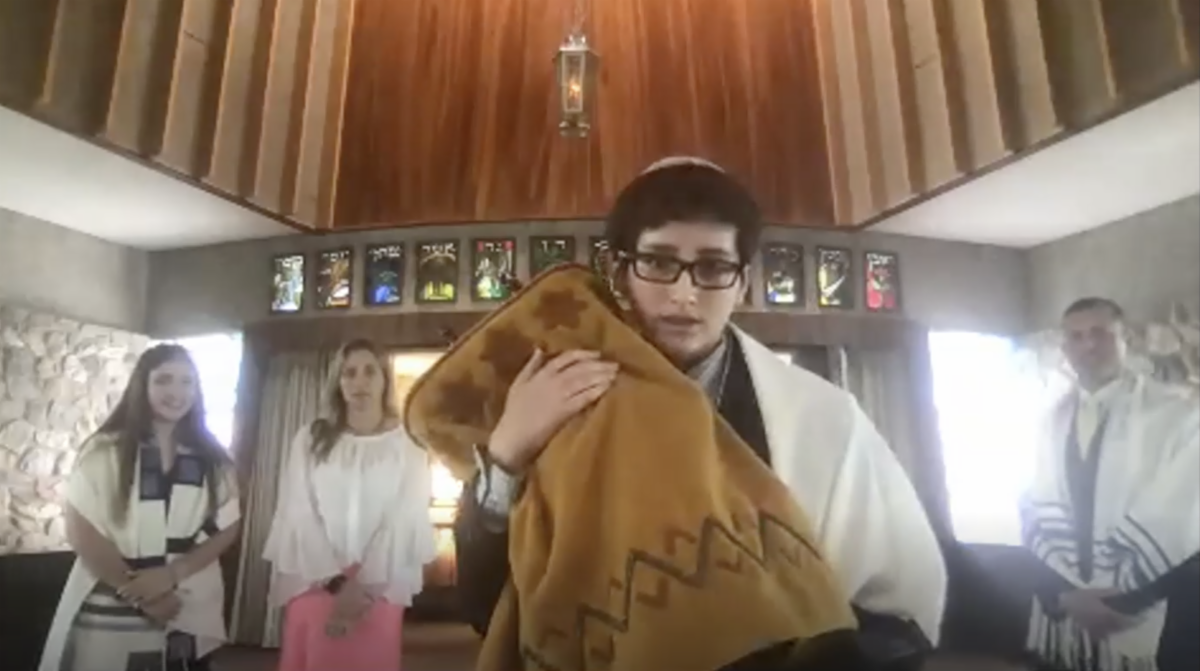 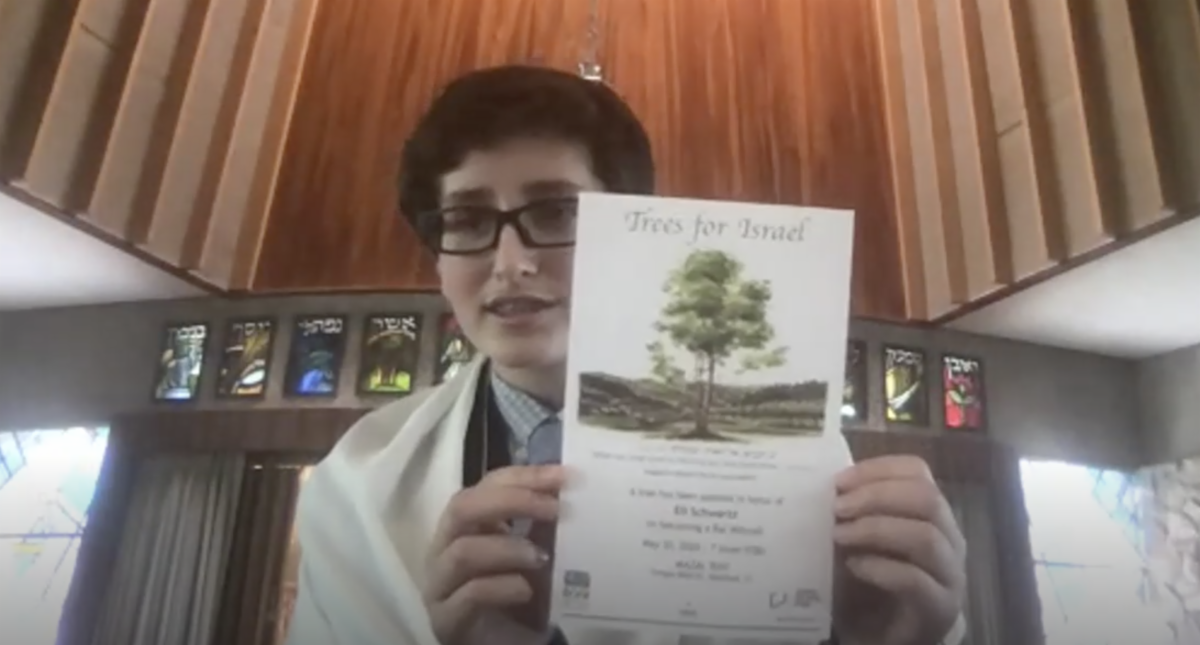 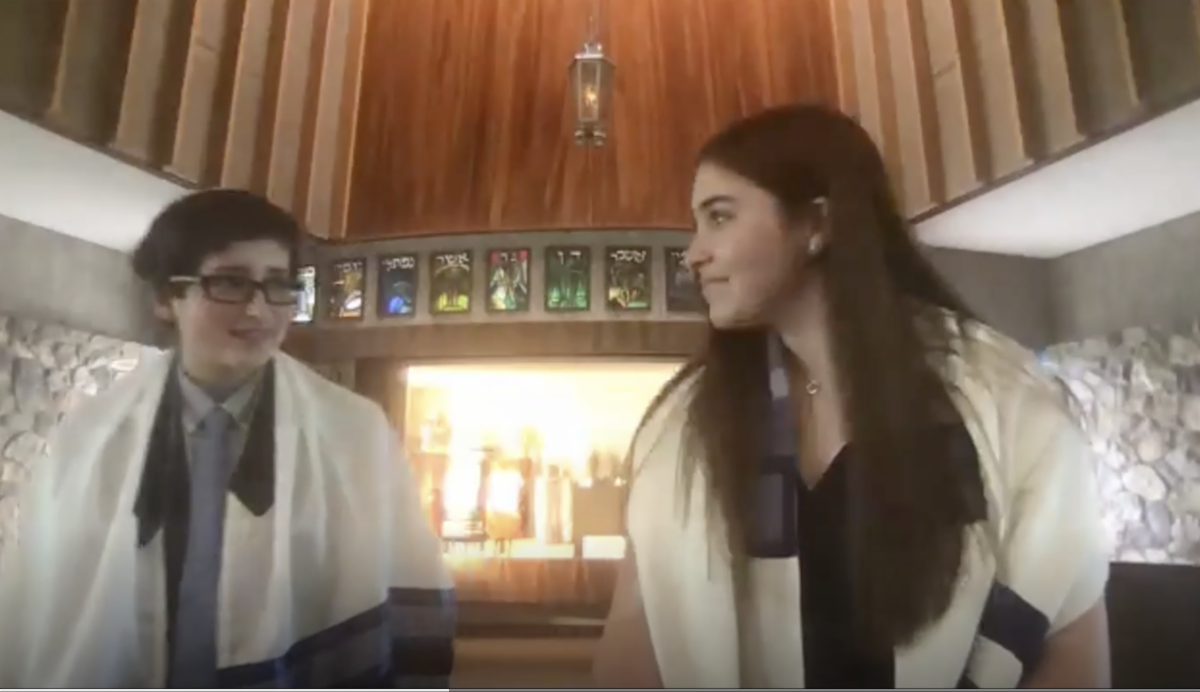 Greetings from the Bunker!

Our first Zoom Mitzvah went off without a hitch. You can watch the video here.  At a time where there is so much (justifiable) concern about how things are coming apart in our world, it was nice to have a moment where hundreds could come together to celebrate around a student who has inspired us with his courage.  You've got to hear his speech - at 1:35 into the recording - to fully appreciate how remarkable Eli is.  Click here to read the speech.
Eli's class read a lovely blessing specific to a bar mitzvah at this time of Covid-19. You can read it here.

What about the rabbi's charge?  We solved the distancing challenge when I charged Eli from the organ loft overlooking the sanctuary. It felt less like a rabbi talking to a Bar Mitzvah and more like the balcony scene from "Romeo and Juliet."

It was quite a morning.  Thank you to Rabbi Vicki Axe, who led singing and also shared some moving words.

Last Friday night's service with Cantor Katie and Koby was also recorded - You can find it here.  And finally, all the services and events that we have recorded thus far this Quarantine Season have been assembled in one place - You can access that archive here.

This Thursday, we have a chance to meet up with our sister congregation in Las Vegas.  At 7 PM (our time), I'll be talking with congregants of Temple Beth Shalom  about "Embracing Auschwitz" and engaging in dialogue with my colleague, Rabbi Felipe Goodman.  We'll also make time for congregants from the two congregations to participate and get to know one another (as best that can happen in Zoom world).  BTW, many of us know the president of the Las Vegas shul and shadchan of this event - Jared Finkelstein, a former trustee of TBE.  Here are the links for the event:

Some Recommended Reading and Watching

- If you are looking for a balanced and comprehensive perspective on the prospective Israeli annexation next month of the Jordan Valley, read this analysis by Time of Israel’s David Horovitz. Horovitz shares “the consensual Israeli opposition to relinquishing large swaths of West Bank territory to the Palestinians now or in the near future,” for security reasons.  “Nonetheless,” he adds, “unilateral annexation - the move Netanyahu is signaling absolute determination to execute in the next few weeks - would be an unmitigated disaster for Israel, an indefensible decision in the full meaning of that word.”

- Those of us still trying to figure out what is happening next week may have been shocked to hear yesterday that AIPAC has cancelled its Policy Conference for next
year. The fact that several people came down with the novel coronavirus after this past March's conference might have had something to do with this decision. Read more about it here.

- Americans may be distancing, but research shows Jews are more connected than ever (Forward)  The COVID-19 pandemic has rapidly and painfully transformed almost all facets of American life. The way we live, work, and connect with others have all been disrupted, in some cases by social distancing, and in others by loss. There is good news, though: New data shows that the coronavirus has not altered the resolve of the nation’s Jewish community to empathize and connect with others around them.

- Did you see the documentary shown last week on PBS, Viral: Antisemitism In Four Mutations? The film explores the recent rise in antisemitism, which is increasing in ways not seen since the 1930s, in the U.S. and Europe.  The “virus” (a term that has gained resonance these days) is seen across the political spectrum, where it is manifested through nativist nationalism (Hungary), Islamic extremism (France), leftist anti-Zionism (Great Britain) and White Supremacism (the US).  When seeing the whole film at one time, you can begin to find the commonalities between them.  It’s really well done, AND....you can stream it for free until June 23!

- This weekend I also streamed a film that I have been wanting to see, and it’s now available for rental on Amazon, YouTube and Google. “Incitement”  tracks the events leading up to the assassination of Yitzhak Rabin in 1995, perhaps the single most important event to take place in Israel since the Six Day War. The film focuses on the perpetrator, Yigal Amir, and his descent into religious extremism.  Much of the film is shot almost as if you are looking at the world through his eyes - the camera seems to shadow him rather than observing him.  It’s really powerful.  Some have criticized the film as humanizing Amir too much.  But we need to know him as a human being in order to understand the viral - that word again - nature of what drove him and so many others to accept the insanity of murder as an option.  The culpability of extremist rabbis - and even Jewish tradition itself - is not minimized here.  It’s worth watching, now that is easily available online.

The phrase of the year, for our two crises...

In the Bible, the same words connote both breath and soul: "nefesh" and "neshama"

And the name of God is the sound of breathing 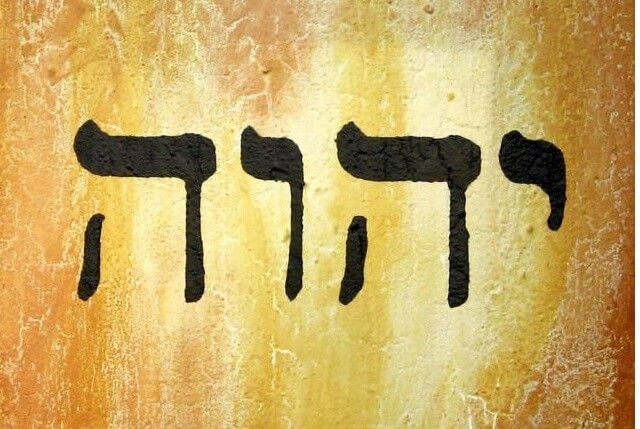 These are heartbreaking times.  Yes, they are enraging and frightening as well, but sadness is the overwhelming emotion that we are feeling after the murder of George Floyd, after seeing that video, and the video of the dog-walker in Central Park, and the coverage of the protests.  Perhaps it is a sign that America has changed for the better, in that so many have felt sadness more than fear or anger. If we're angry, it's at those who are seeking to manipulate the shock to foment panic and hate.  If we are fearful, it's less of the "other" than of those who are trying to divide people and destroy the precious fabric of commonality that historically has joined Americans together during tough times. But the sadness cuts across the political spectrum, and that hasn't always been the case.  We need to be grateful for the little things like a unifying sorrow at a time like this.

But a degree of outrage is also warranted at this time.  We've seen all too often proof of how racism pervades our society.  Institutional racism has the power to erode our basic humanity, to erase what is good and what is positive. We need to recognize that the toxicity is found in each of us. While issues surrounding law enforcement and the justice system need urgently to be addressed, racism is a pathology that affects everyone. This past week the issue once again bubbled to the surface, but it's been in fact bubbling quite a bit since the pandemic began, on the ground in our cities and in the halls of power, where few have heeded the the cry for help among communities of color that have been disproportionately afflicted.  From that tinderbox, the specific events of the past few weeks, the flame was lit.

But outrage needs to be constructive - and that means not directing it entirely against one segment of society.  None of us should paint any group with a single broad brush, whether that group be distinguished by ethnicity, religion or profession.  I for one continue to be in awe of our first responders, who have courageously protected us during trying times.  I'm grateful especially to police officers who put their lives on the line daily for us.

Constructive outrage does not impose labels, nor does it resort to wanton destruction, theft and violence.  But destructive outrage is not really outrage.  It's driven by ideology, greed, cynical, political machination or simply a nihilistic desire to break things - under the cover of presumed outrage.

While diversity is to be treasured, beneath it all, we are the same.  And that's the message being proclaimed by religious leaders this week.

Rabbinical Assembly Statement: Conservative/Masorti Rabbis Respond to the Murder of George Floyd, Pattern of Racism, Police Brutality Against Black Americans:
In 2016, in response to incidents of police brutality against black people in Ferguson (Missouri), Baltimore and other cities in the United States, the Rabbinical Assembly, the international association for Conservative/Masorti rabbis, passed a Resolution on Racial Injustice and Police Brutality, which called on lawmakers to pass legislation aimed at reducing decades of historically high levels of inequality, especially in our prison system. It also called on members across the country to form deep, meaningful relationships with local communities across lines of faith and race, in order to better understand the issues that impact us all and to be in solidarity with movements for racial justice and inequality.
We are dismayed that since then, insufficient progress has been made and as we bear witness today to the brutality of treatment and subsequent death of George Floyd by law enforcement, and we cannot remain silent. As the Torah teaches, we will not stand idly by while our neighbor's blood is shed (Lev. 19:16).
The scourge of racism is prevalent in only some but far too much of our law enforcement and must be addressed and those guilty of abuse must be held accountable to the strictest penalty. It has become painfully evident that the overwhelming majority of decent officers and others entrusted with police powers and their oversight have not been able to make the necessary changes to a system that disproportionately targets minority communities and people of color.

We join in the collective call for peace and reflection during civil unrest, but understand that to achieve this end we must act. For these reasons, the Rabbinical Assembly calls on legislators at the national, state, and local levels to fundamentally change their approach to law enforcement and the justice system so that they serve and protect all Americans, regardless of race or ethnicity. We encourage our own members to reach out to other communities, to Jews of Color, as well as to local law enforcement to help lead and shape these endeavors within the community.
United in purpose, we will dismantle the systemic racism all too embedded still within American law enforcement and its justice system. The firing and we hope prosecution of the four Minneapolis police officers involved in this one egregious murder is a necessary step, but it cannot be the only action against structural injustices that have plagued generations and continue to this day. We must forever strive for a free and just society for all people. 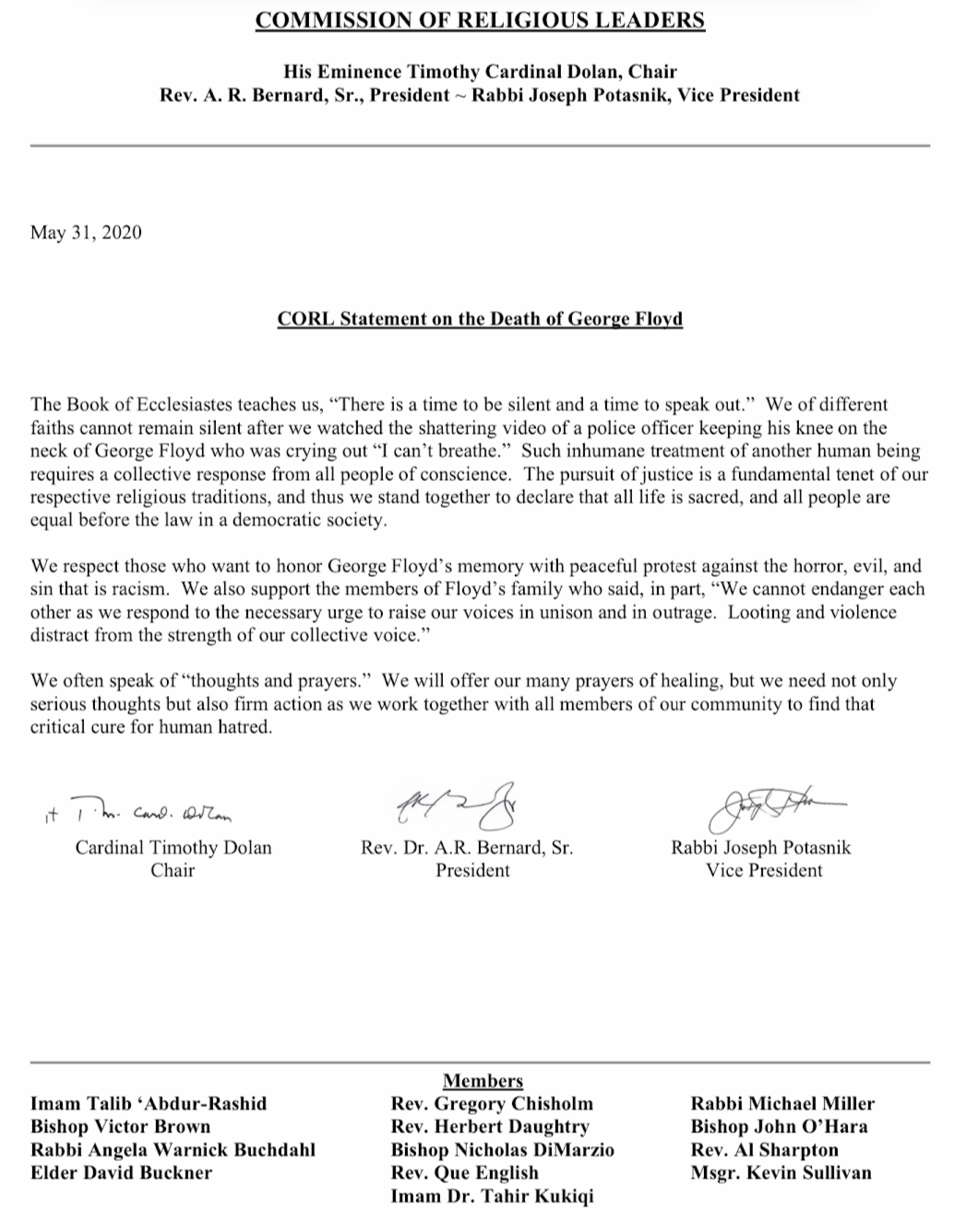