As we begin preparations for Passover, I'm reminded that this year marks 30 years since my father's passing. It so happens that even he has found his way onto the web, and with a Passover song, no less. That is not surprising, since he loved this holiday and my memories of our very musical seders are no less vibrant today than they were those many years ago. 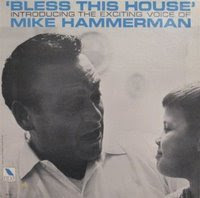 In the 1960's his album "My Folks, Their Songs" (here seen in an earlier incarnation - and no, that is not me on the cover, but some impostor!) didn't exactly go platinum, but it was a good platform for many to be introduced to a voice that made him the dean of the New England cantorate. Cantor Jeff Klepper paid tribute to him and to the first song on that album, "Dayenu" in his blog last year.

Here's a Dayeinu For The Ages. When I started collecting Jewish novelty songs - think Jewish Dr. Demento (he is Jewish, I know) - I would occasionally come across a track that was recorded in complete seriousness, but hit me funnier than many comedy songs. Not like the stuff on NPR's Annoying Music Show, which is just annoying. I mean great music, the kind that gets better with age. (Sometime I'll let you hear my 10 worst Hava Nagilas and you'll see what I mean.)


So, enjoy this Pesach treat, the late Cantor Michael Hammerman, tenor, beloved hazzan of Brookline's historic Congregation Kehilat Israel, from his album of Jewish songs called Bless This House. I don't want to spoil the fun of discovering it for yourself. I'll just mention, in the third verse, after he gives a krechtz (cry) on the words "try to do it" the track gets more and more bizarre by the second, straight through to the end. This is one you'll want on your iPod. (Here are the lyrics.)


I agree with Jeff on the campy nature of the arrangement (evocative of the era), though I wouldn't exactly call it "bizarre." Unfortunately, there are few examples on the web of his amazing voice.

You can find his name mentioned in the midst of a nostalgic tour of my home town of Brookline if you scroll down half way. If you log in, you can hear the contents of that entire album from a Dartmouth archive found here.

But although Dayenu means "it is sufficient," sometimes even Dayenu isn't enough! I've uploaded some of Dad's "Greatest Hits" here, in celebration of his 30th yahrzeit. Some of these are being made public here for the first time, including "live" recordings of "Kol Nidre," "Selichot" and "Musaf Rosh Hashanah" as taped at Kehillath Israel in 1971 (by the non Jewish janitor, BTW) as well as an excerpt from one of the classic "Brothers Hammerman" concerts that he did with his brothers, who were also cantors, Herman and Saul Z. Hammerman. Zel (as his family called him) passed away just a few months ago and there was an incredible bond between him and my father, which shines through in this excerpt, along with their passion for Jewish music (and the other family trademark, their sense of humor). The Selichot recording also features the long-time rabbi of K.I., Manny Saltzman, known for his great oratory. Rabbi Saltzman also is featured in the "Our Believing World" broadcast, which appeared on Boston television before the High Holidays one year.

These are truly collectors' items. They were recorded at the tail end of an era of greatness for the American Cantorate, reflecting a style that is nearly extinct. There are still great cantors around, but the focus now is much more on participation and more intimate forms of spiritual expression. I'm a proponent of those newer, more indigenous American Jewish forms, but no one can deny the power of the voices of that era - and my father was one of the greatest. When people came into KI during the '50s and '60s, typically the place was packed every Shabbat. Hundreds of people would stream in from all over the Boston area. These were the golden days for my community. North Brookline was virtually a shtetl, especially on Shabbat and holidays. We even had a junior congregation that was filled each week - a service led by teens for teens. Out of this crucible of intense Jewish passion were nurtured over 30 rabbis and many more teachers and educators, including some of the greatest of our era.

This is an era that is no more. In many ways, the Conservative movement now needs to move beyond it, and the nostalgia for those times, so it can forge a new era of greatness. Many shuls are still stuck on those memories and have yet to realize that the caravan has moved on. But as we all move forward, I'm glad that my father's music can now go with us. For those in Brookline and elsewhere who have waited 30 years for this, it took me almost that long to figure out the technology. There are still glitches, but hopefully, if you have QuickTime capability, you'll be able to play them. I've divided these up into three blog entries to help in the downloading process. Through the magic of the Web, I hope you'll feel transported back to simpler times.

But for now...Dayenu!
Posted by Joshua Hammerman