From the Rabbi's Bunker: May 10: HAPPY MOTHER'S DAY

And below, in support of United Hatzalah of Israel's Coronavirus Emergency Response Fund Saving lives every day, regardless of race, religion, or language. https://israelrescue.org/savinglivess... 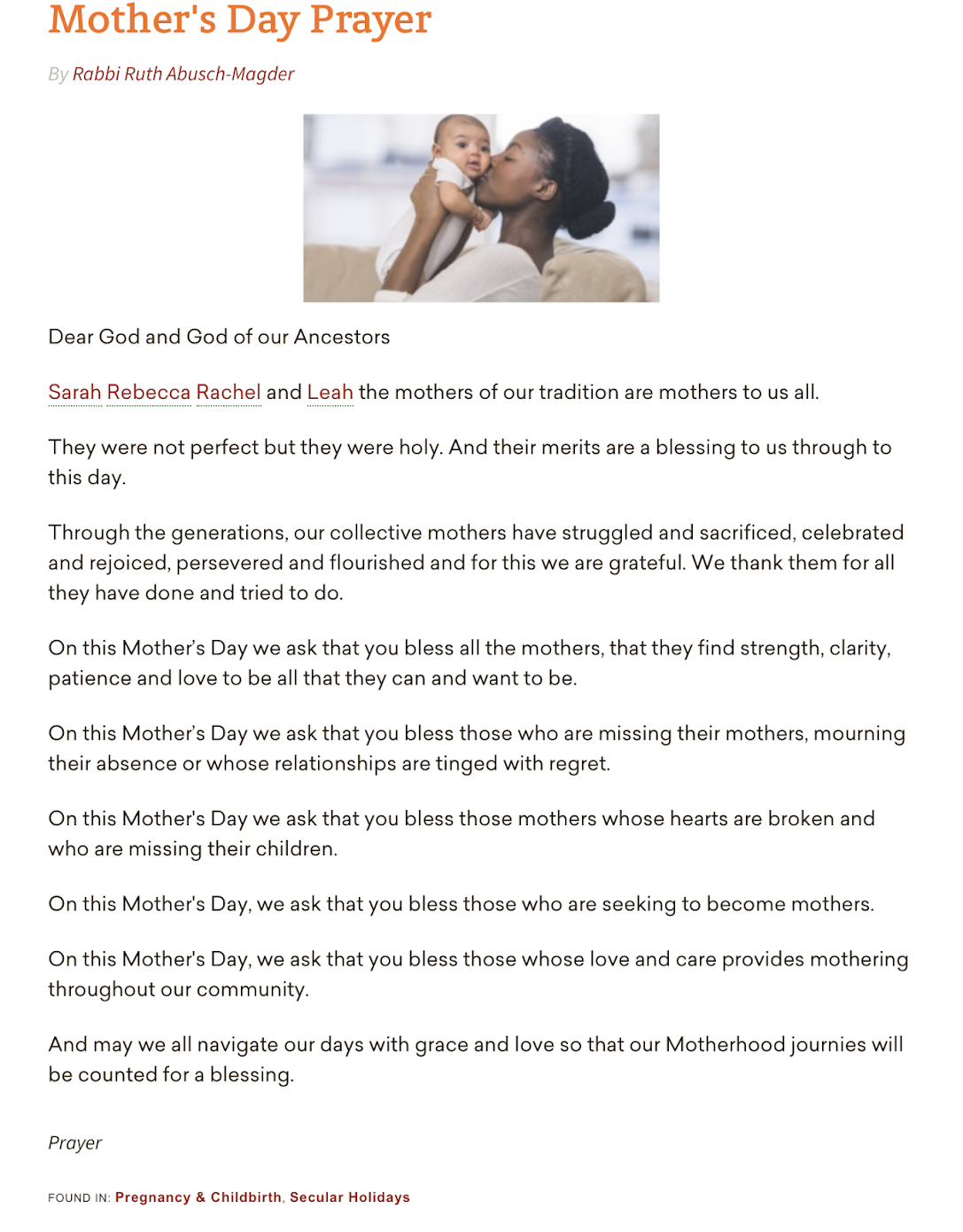 When Should Religious Institutions Open Up?

(according to the CDC Guidelines obtained by the AP) 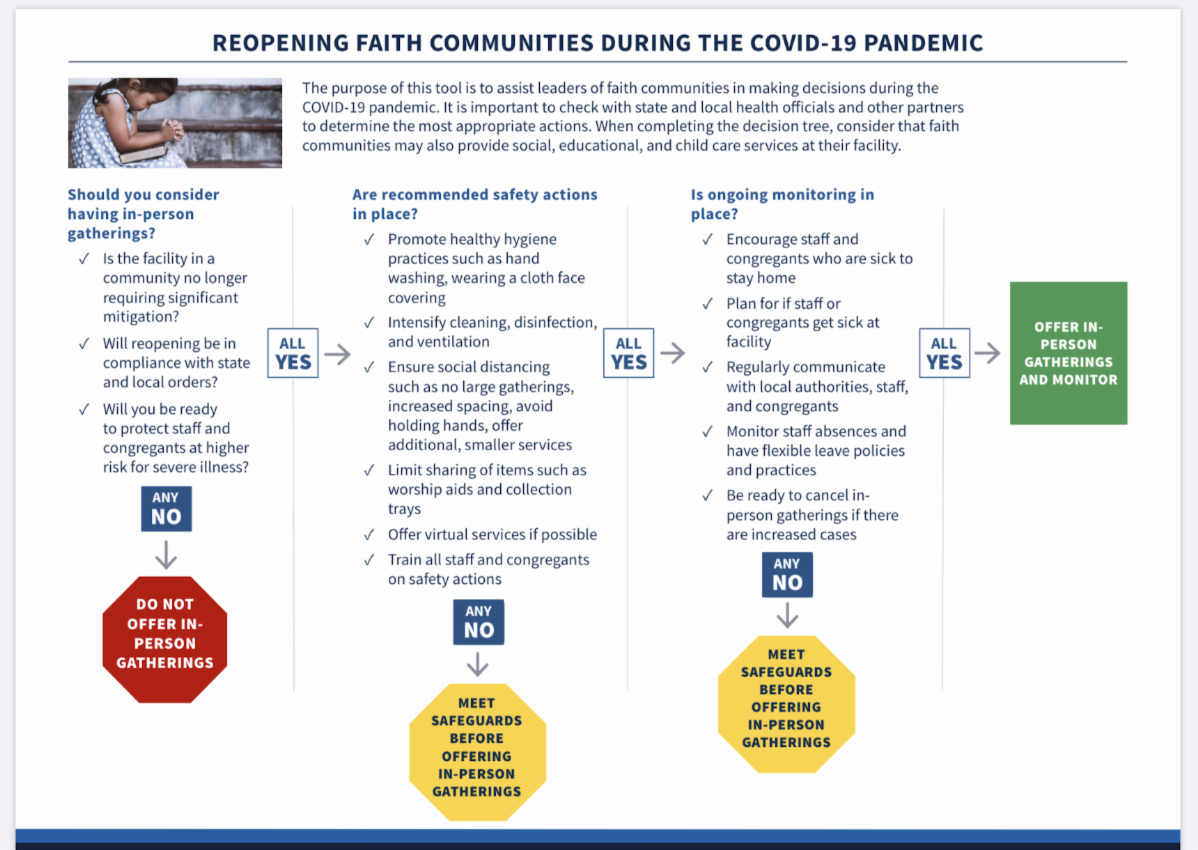 The Great Big Jewish Food Fest (online and in your kitchen)
Yes, this is a completely free online festival! Over 10 days we will have a variety of events-workshops & conversations, happy hours, and Shabbat dinners-which will take place over Zoom, Instagram, and Facebook. We'll also be unveiling a library of unique Anytime Content that can be experienced throughout the duration of the festival.

Religion Can No Longer Claim Moral Superiority, and Six Other Lessons From the Coronavirus Crisis (Ha'aretz)

"The coronavirus crisis is unprecedented in many ways, but we can already draw a few simple lessons in the "darkness."
...Lesson No 1: We live in the shadow of a powerful state. More than 4 billion people worldwide have stopped moving around, working and socializing in an ordinary manner, and have done so without much or significant protest. These billions have willingly given up the most fundamental aspects of their freedom, even though, in fact, we still lack some key information about the epidemic that is responsible for the restrictions (for example, how many are actually infected, and thus what the real mortality rate is). They accepted confinement to their homes (assuming they had one), confirming the view of Thomas Hobbes (and others) that fear of death is the most powerful political passion and that we will always be willing to sacrifice our freedom for our security.
...Lesson No. 5: The home is not so sweet after all. In times of war, the fear of death exists but we usually and normally confront it in the company of other people, we know who the enemy is, and we can draw on the large symbolic repertoire of heroism to fight the enemy. Yet, in the case of the fight against a disease, we are reduced to very small units, and sometimes entirely isolated from the rest of the world; there is no action to take and we have very few known symbolic repertoires to draw from. The weapon that may kill us is not one that is fired upon us by the enemy, but rather something that we, unknowingly, carry within ourselves and pass on to someone else.
... Lesson No. 6: The value of work and of production becomes entirely inverted in such a crisis. There was a line circulating on social media about soccer player Cristiano Ronaldo making millions of dollars a month and medical researchers making a grim salary. The line, attributed erroneously to a Spanish government minister, suggested turning to Ronaldo or to Lionel Messi to develop a coronavirus cure. The joke pointed to the inverse relationship between value and prestige that characterize societies that are normally driven by consumption, celebrity and spectacle.
We owe our survival to people who work in supermarkets, in hospitals, people who clean the streets, people who deliver food, people who maintain the power stations and electrical lines. These are the people who have now become meaningful for our survival. Celebrities or financial wizards appeared in all the splendor of the emptiness of their work, as it has been the occupations that are normally invisible and lacking value to us that have sustained us all.
If there is a lesson to be learned, it is that our "normal" world has a deeply distorted scale of values. The people who have helped us survive, and who keep and maintain the social order, are at the bottom of the scale while those who are perched at the top of that scale have been, by and large, entirely useless in recent months.
Lesson No. 7. The relationship between secular and religious will never be the same again. Rarely have the differences between religious and secular people been so profoundly conspicuous as they have been reflected in the way the two groups have, respectively, reacted to and handled the crisis.
Evangelical Christians in America and ultra-Orthodox Jews in Israel have little knowledge and respect for science, they maintain lives of great insularity, and by and large listen only to the recommendations of their clerical leaders. These recommendations were late in coming and seemed to have been issued only reluctantly.

Among Israel's secular public, the young followed injunctions from the Health Ministry and made enormous sacrifices in terms of freedom and economic survival to help avert the deaths of older people. In the Israeli context, there has always been a kind of smugness on the part of religious people toward the "empty wagon" of the secular public. If anything, we have had a live experiment, and it has revealed that secular people are no less, if not more, capable of civic responsibility as the religious in the discipline they displayed and in the networks of volunteers they put in place.
This must remain a milestone in the self-consciousness and self-identity of secular people. The behavior of secular people during the crisis certainly suggests religion can no longer claim any moral superiority when it comes to making sacrifices and caring for others.
Many leaders around the world should not sleep soundly. Throughout history revolts and revolutions have occurred over much less."

F--- the Bread; the Bread is Over (Sabrina Ora Mark, Paris Review)
"And maybe the bread, as I've always understood it, really is over. The new world order is rearranging itself on the planet and settling in. Our touchstone is changing color. Our criteria for earning a life, a living, is mutating like a virus that wants badly to stay alive. I text a friend, "I can't find bread flour." She lives in Iowa. "I can see the wheat," she says, "growing in the field from outside my window." I watch a video on how to harvest wheat. I can't believe I have no machete. I can't believe I spent so many hours begging universities to hire me, I forgot to learn how to separate the chaff from the wheat and gently grind.

...It's day sixty of homeschooling. Eli asks me to remind him how to make an aleph. I take a pencil, and draw it for him very carefully. "It's like a branch," I say, "with two little twigs attached."  "You know what, Mama?" he says. "You'd make a really good teacher." "Thank you," I say. And then I show him how to draw a bet."

And finally, for those of us who have been experiencing Zoom services recently - and many of us have - they've been great, but the awkwardness was highlighted in this pitch-perfect SNL skit:

Have a happy Mother's Day, from the Bunker!