From the Rabbi's Bunker: May 12: No Summer Camp? Lag B'Omer Saves the Day! It's Now Up to Us to Light the Fire

I've shared music from the Jerusalem Youth Chorus before.  But this is too lovely to miss.  David Broza, Mira Awad, Achinoam Nini, stars from Hamilton and YouTube, legendary vocal activists, and a hundred of JYC friends from around the world joined to create and share music and community, each of them from their homes.

OK, maybe Lag B'Omer can't fully replace summer camp, but at least we can hear the crackling sound of the bonfire, virtually, by clicking on the video above.

I feel so badly for all the kids who will be missing camp this summer - and even worse for their parents!  I know first-hand of the incomparable impact of Jewish - particularly Zionist - camps on the American Jewish community.

Let's sing some of those old campfire songs... we can start with the Finjan, an ode to that old, creaky coffee pot.

In Israel last night, not everyone could keep to the social distance guidelines. 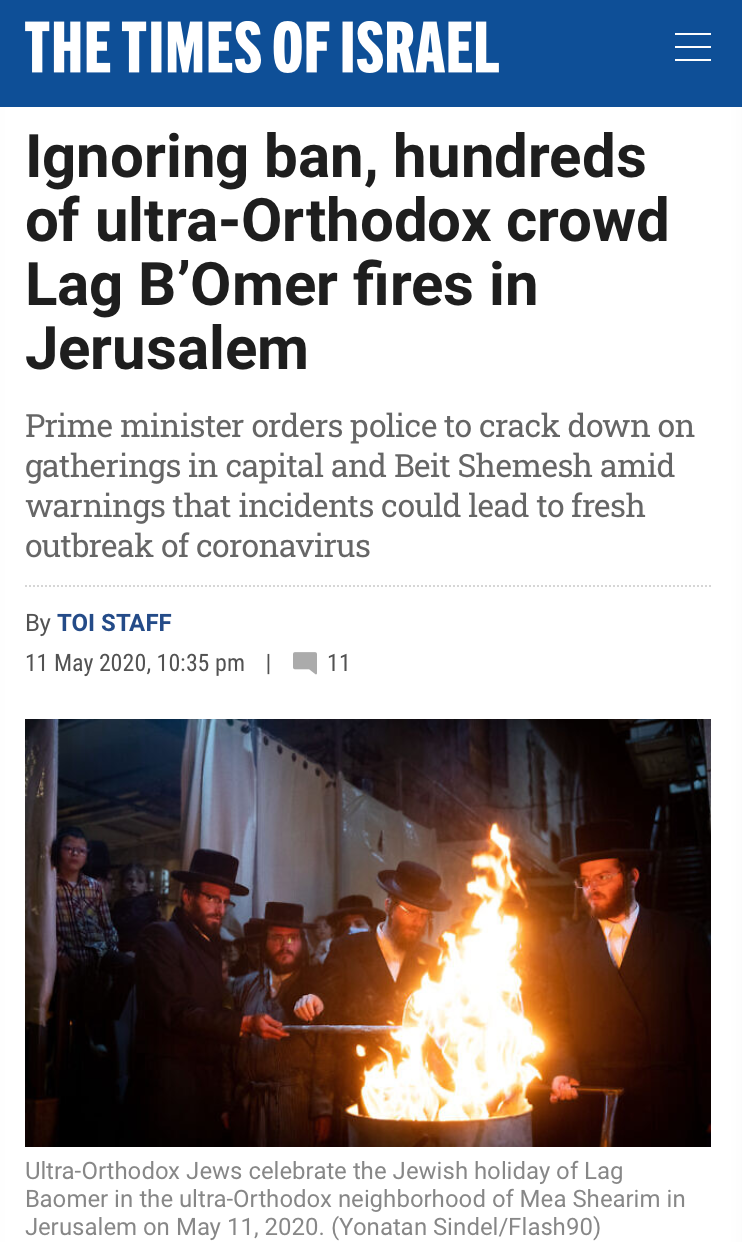 Maybe the lack of real campfires this year (today and this summer) will give us pause to consider whether we've been doing a good enough job of keeping those flames of Jewish passion alive for the next generation.
It was always about the youth...the youth groups and summer camps that were the backbone of American Zionism in the 40s and 50s, back at a time when the major consideration for Jews sending their kids to camp was not whether or not the camp had video games or water skiing or whether it was "too Jewish,"; but whether our kids would come home with that flame burning in the secret fastness of the heart.  Blessed is that match, from which arises the flame that will illumine Zion!
This by the way, is why the previous generation used to send its kids not just to summer camps, but to Jewish youth groups as well, to USY and NEFTY, and also to Young Judea, Hashomer Hatzair, B'nai Akiva, Beitar, BBYO and others.  We wanted to ignite that flame in our children, the love of Zion, the love of Torah, the love of the Jewish people, the love of humanity, the love of commitment, the love of one's neighbor as oneself.
Now, if we send our kids to Jewish youth groups at all, the primary concern for many seems to be less the ideas that they learn to love, but the profile of the person that they'll fall in love with. We tend not to care as much that our kids have passionate ideas anymore. Admit it: the most popular Jewish youth group leader in our community today is Stanley Kaplan.
Milan Kundera asked in the Unbearable Lightness of Being," "What shall we choose, weight or lightness?"  From time immemorial, the Jewish people have cast their lot with meaning over comfort.   In our understandable desire to shield our children from all the horrors, we have mistakenly not enlisted them fully into the battle that will determine their future.  This is no video game!  This is REAL!  - a melee without Pikachus: a melee in which they must ultimately pick and choose.  And if we fail to guide them, a precious opportunity to uplift them into the world of idealism will have been forfeited.
We need for our children and grandchildren to cast their lot fully with our people and traditions.  And for that to happen they need to see OUR Jewish flame burning.
So let's light that bonfire.  Tonight.  And this summer, too.  If not at camp, then in our hearts - and in the hearts of our families.

Lag B 'Omer and Akiba's Plague

The Talmud teaches that a great plague afflicted Rabbi Akiba's students in the 2nd century, and that it ended on Lag B'Omer. Here are two sources: 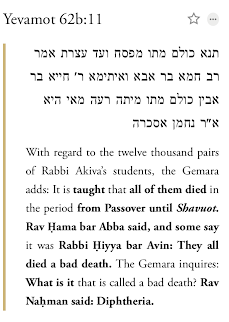 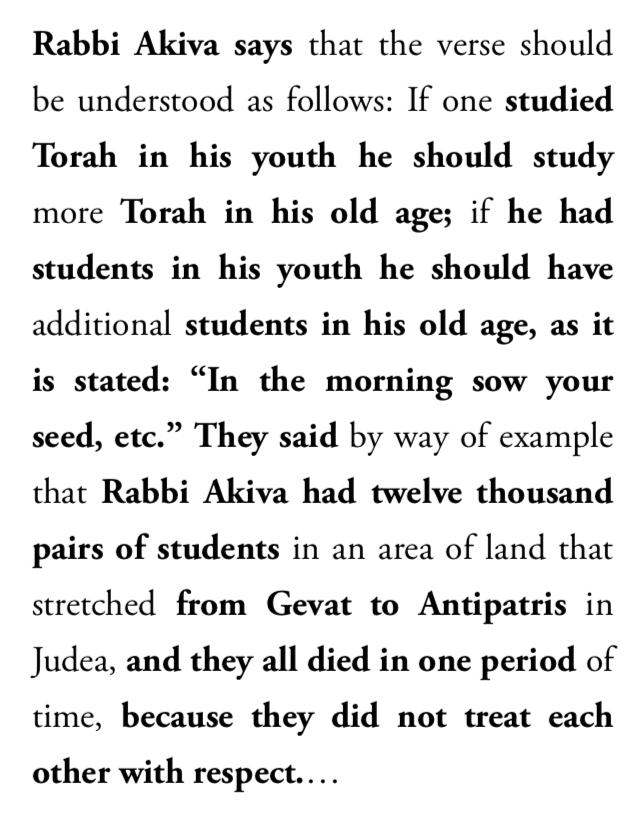 Many believe the true source of plague was the Roman soldiers, who enforced a strict prohibition on Torah study.  It's interesting to note that sages saw the cause of the plague as a lack of mutual respect among the students.

In the text below, see mention of the custom of mourning by not having weddings or haircuts during the Omer, as recorded in the Shulchan Aruckh, the great code of Jewish law. 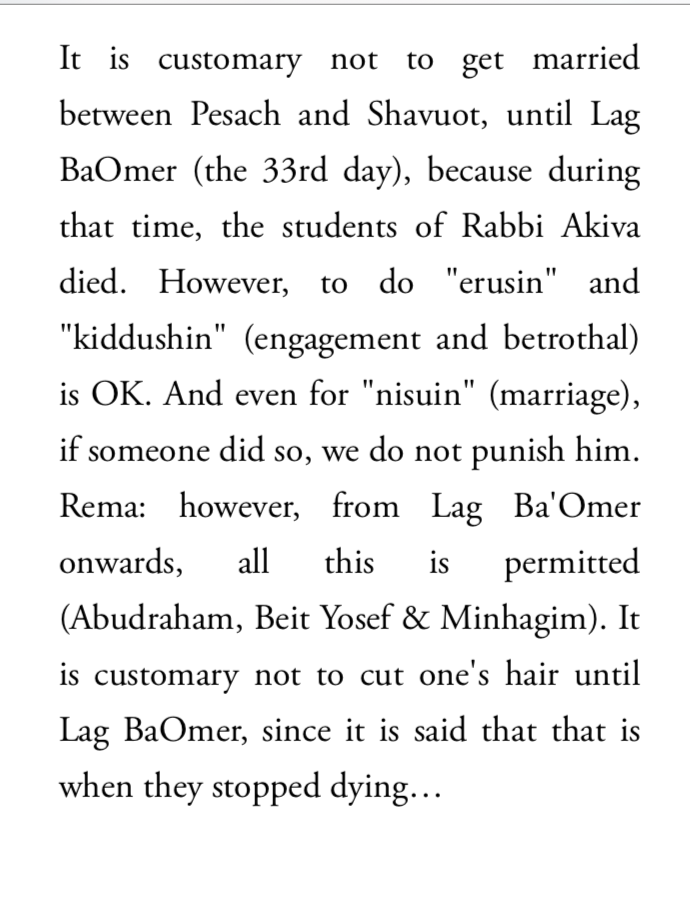 May our time of plague and mourning soon end, as it did for them.... 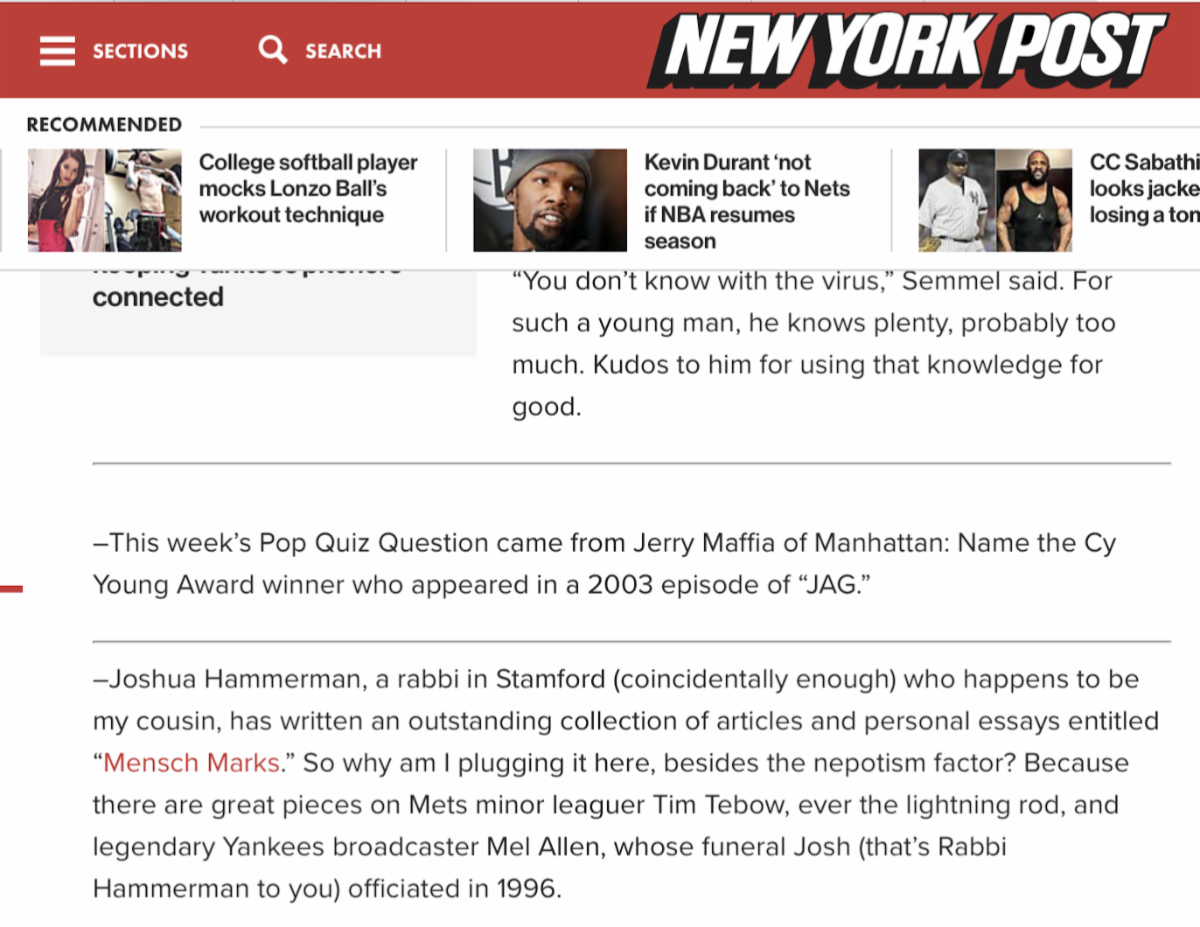 Yankees' Montana Semmel dodged coronavirus, now he's helping defeat it - Thanks to my cousin, NY Post sportswriter Ken Davidoff, who wrote this beautiful piece about a Stamford native and in the same piece, gave a shout out to my bool "Mensch-Marks."  I guess it proved to be good quarantine reading!

If There is No Minyan, Are There Alternatives to the Mourner's Kaddish?
- David Goloinkin, Schechter Institute. A comprehensive, clear, and
well-researched response to this current question, as only David Golinkin can.

The Moment to Change the World Is Right Now (Time) - Right now, we are in the biggest crisis since the Second World War. The economic impact of COVID-19 is greater than the impact of the Great Recession of 2008, and may be even greater than that of the Great Depression of the 1930s. And if history teaches us anything, it's that extraordinary things are possible.

The Kabbalist's Guide to Haircutting - And what does it have to do with Lag B'Omer?

How to Stay Optimistic When Everything Seems Wrong (NY Times) - Optimism isn't about ignoring negative feelings. It's about being hopeful about the future, even when the present seems wholly negative. 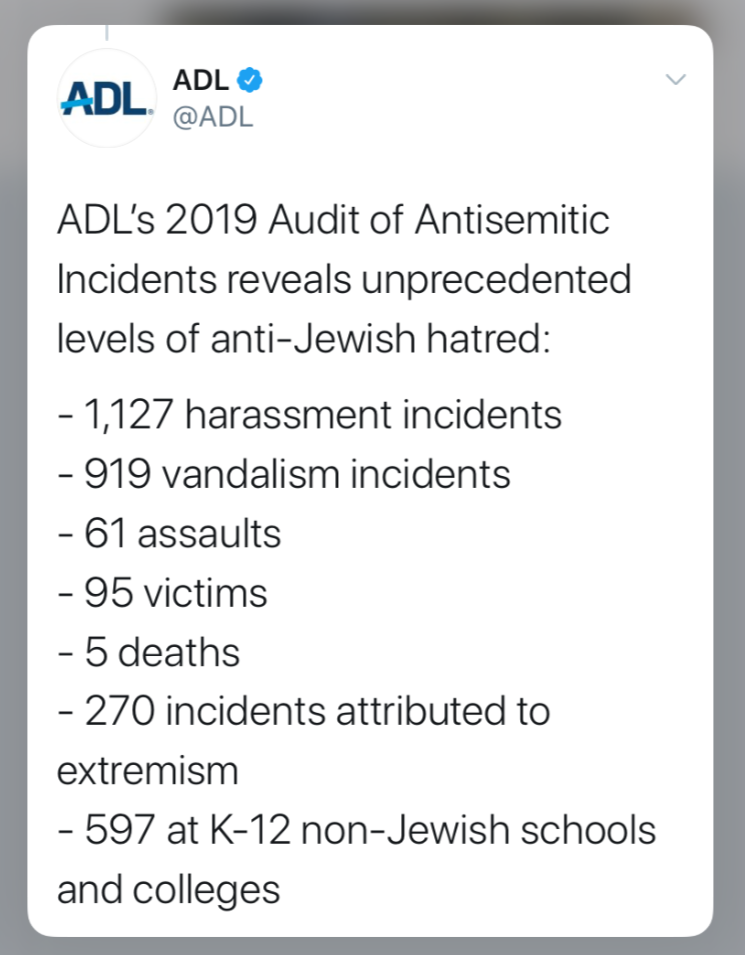 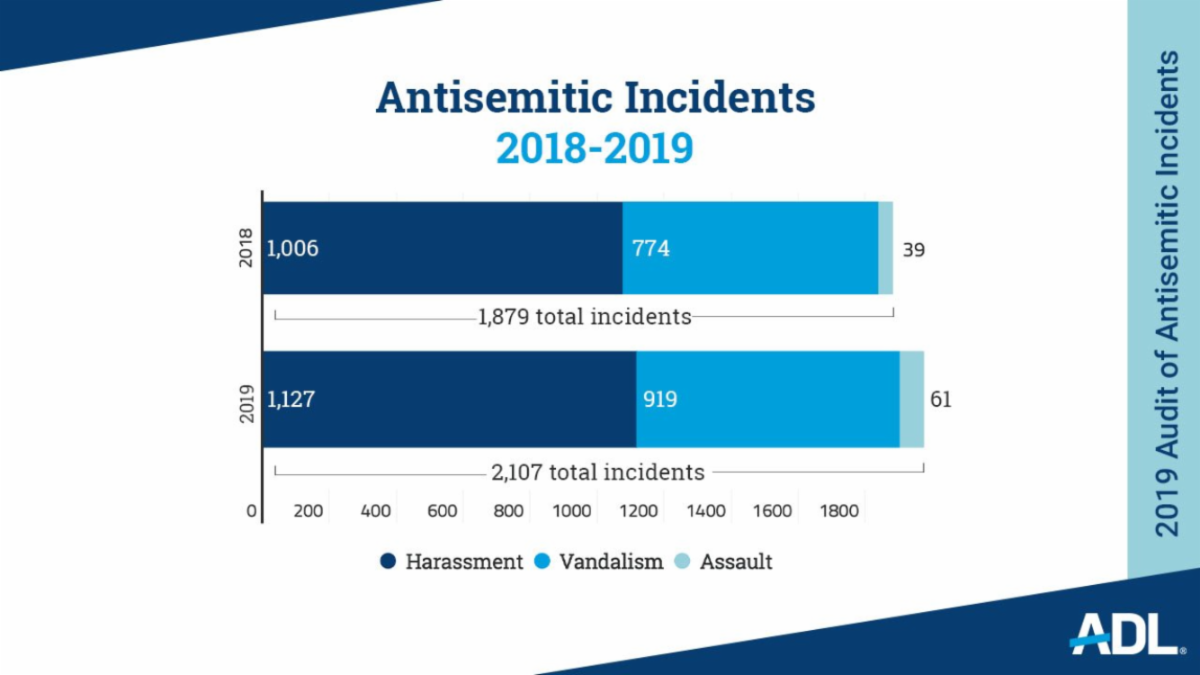 Highly Anticipated New Movies for Home Screening
INCITEMENT - Acclaimed writer-director Yaron Zilberman (A Late Quartet) chronicles the disturbing descent of a promising law student to an intransigent ultranationalist obsessed with murdering his country's leader, Israeli Prime Minister Yitzhak Rabin. Incitement is a gripping and unnerving look through the eyes of a murderer who silenced a powerful voice for peace.

Abe - Twelve-year-old Abe (Noah Schnapp) is an aspiring chef who wants his cooking to bring people together--but his half-Israeli, half-Palestinian family has never had a meal that didn't end in a fight. Ditching his traditional summer camp, Abe begins working with Chico (Seu Jorge), an adventurous street chef who encourages him to think outside his old cuisines. But when Abe's deceit is uncovered, he must grapple with his family, his background, and his passions, and whether even the most lovingly-cooked family dinner can heal old wounds.  Also see: "This New Movie About Jewish and Palestinian Foods Is Streaming on Amazon Prime."

Resistance - Before he was the world-famous mime Marcel Marceau, he was Marcel Mangel, an aspiring Jewish actor who joined the French Resistance to save the lives of thousands of children orphaned at the hands of the Nazis. Jesse Eisenberg stars in this compelling drama about a group of unsung heroes who put themselves in harm's way to rise above hatred and oppression during World War II. As a young man growing up in Nazi-occupied Europe, Marcel has no intention of getting involved in the war - his pursuits include impersonating Charlie Chaplin in burlesque clubs, painting backdrops for his plays, and antagonizing his obstinate father. His life is thrown into upheaval when he is recruited into the French Resistance, putting his acting skills to the ultimate test in teaching orphaned Jewish children how to survive in the horrifying reality of the Holocaust.  Based on the inspiring true story, RESISTANCE follows the revolutionary tale of a selfless act that would forever change countless lives.
Much love, from the Bunker