From the Rabbi's Bunker: May 24: Is it Time to Go Back? Have our Homes Become the New Wilderness?

The value of human life is infinite and beyond measure, so that any part of life - even if only an hour or a second - is of precisely the same worth as seventy years of it, just as any fraction of infinity, being indivisible, remains infinite.
Lord Jakobovits, former UK Chief Ra

B'tzelem Elohim (Human beings are created in the image of God.)
Because we see ourselves as containing a spark of the divine, we understand that every person has infinite worth; therefore, no human being should be treated merely as an object, and we should always attempt to see the humanity in those we encounter. This attitude, drawn from Genesis 1:26, underlies many Jewish values.

And in other unprecedented news.... 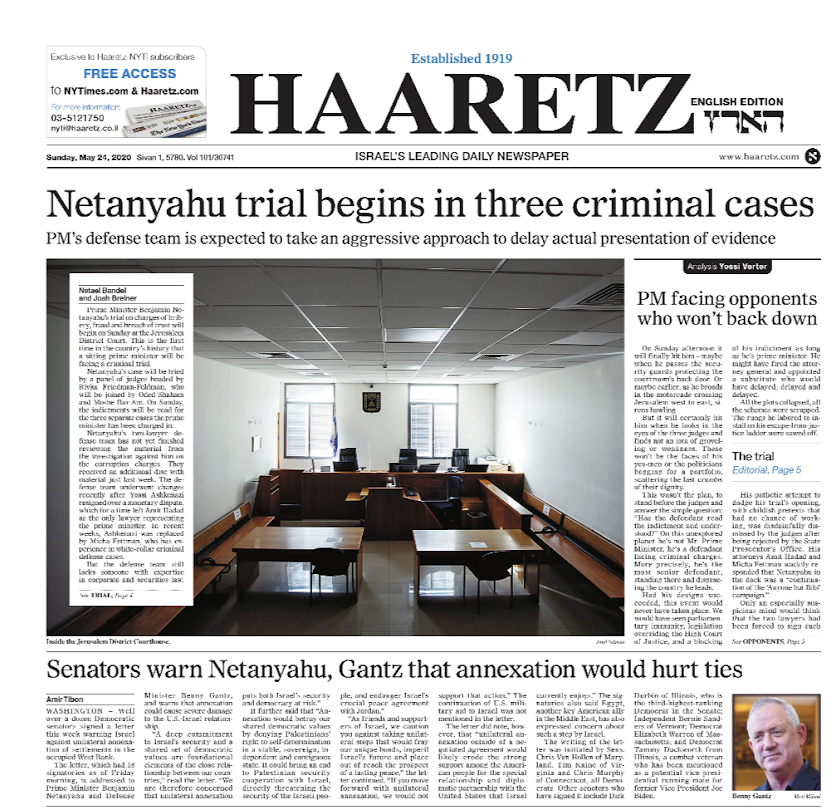 Click here for the latest updates on the first sitting PM in Israel to go on trial.

For more cultural offerings, take a virtual tour of the Israel Museum in Jerusalem

The coronavirus pandemic is changing our world. In addition to the devastating loss and the economic recession that has already started to hit, there is the impact on our institutions, which will be huge. Which will prevail? What aspects of Jewish life will still be here in a post-pandemic world? How will corona change us? What will Jewish life look like when we are able to emerge from our homes and back into public life? We asked 29 thought leaders to think about how the pandemic would influence the part of Jewish life they are most invested in. Their answers took on topics like Jewish philanthropy, Jewish diversity, Jewish values, Jewish journalism, Jewish spirituality, and more in our collection "After Corona." It turns out, there's much to fear - and a lot to look forward to.

Enjoy these selected articles and check out the collection  here.

Is it time to go back? 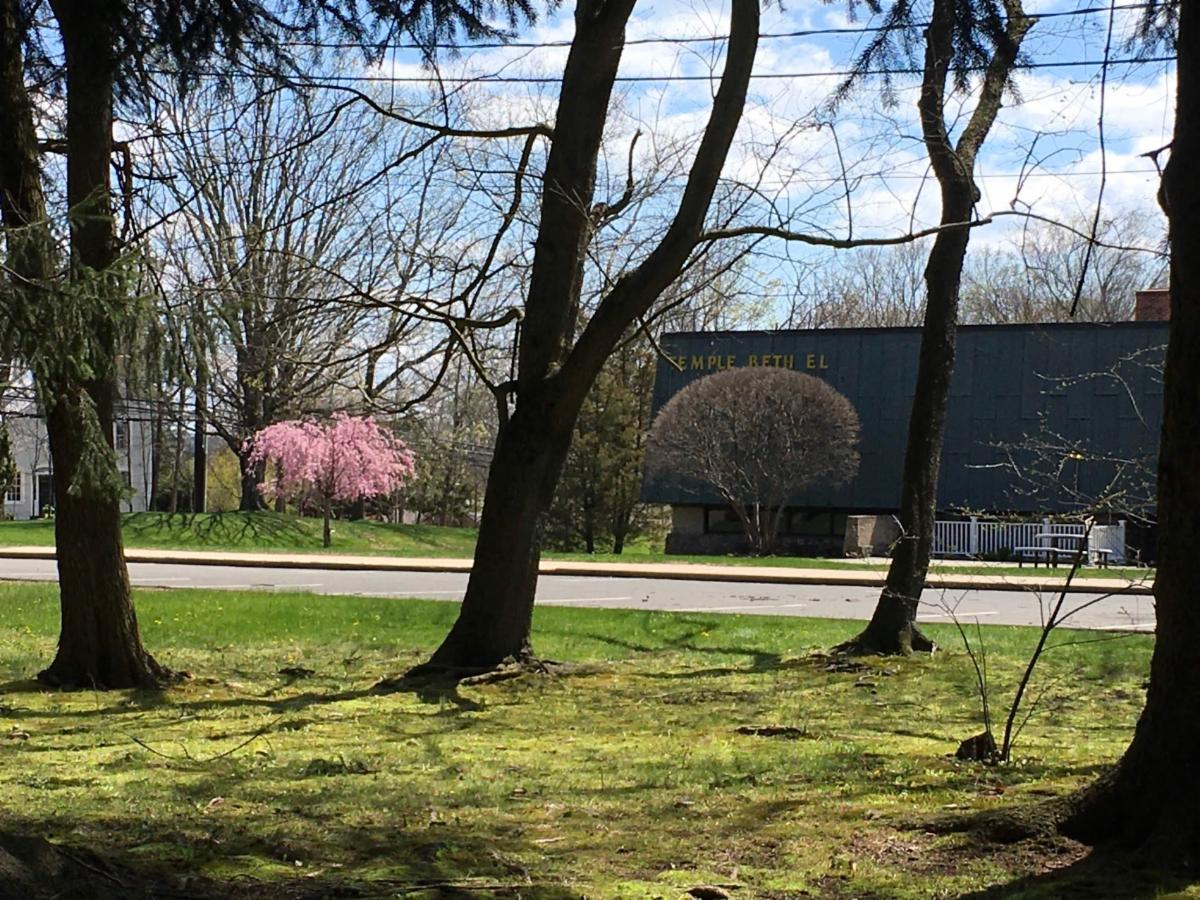 The conversation regarding when to reopen our houses of worship has regrettably taken a decidedly political turn.  That decision is infinitely complicated, but for us, the overriding factor, by far, is to protect lives. I concur with Michael Zimmerman, who, in his essay, "When to Pray Face-to-Face: Clergy, Using Science, Will Decide," wrote:

Houses of worship will be back. Churches, synagogues and mosques will reopen - but they will do so when it is safe - not when they are pressed to do so for partisan political benefit.
Who is able to determine when it is safe for people to gather to pray? Certainly not politicians. No, the only advice that is meaningful comes from the scientific community, from epidemiologists, from doctors, and from virologists.
The vast majority of religious leaders understands and respects the meaning of expertise. They look to those with knowledge for guidance on issues related to that expertise.
The 17,000 clergy members who comprise The Clergy Letter Project originally came together to celebrate the compatibility of religion and science, recognizing that each has something critically important to offer. They challenged the fact that scientific expertise was being cast aside by some in the name of religion, understanding that this was an affront to the principles of their faith while undermining the very nature of science.
In the face of a deadly pandemic, some politicians are attempting to use religion to advance their narrow special interests. These politicians are telling (perhaps demanding is a more appropriate word) clergy to open their houses of worship, to demonstrate that we've defeated the pandemic before us, despite the very clear warnings being offered by the scientific community that to do so is to risk increasing the toll of death and misery.
These politicians misunderstand virtually everything meaningful about religious belief.
They don't recognize that religion doesn't need a physical building or sanctuary to remain alive and thrive.
They don't recognize that religion is every bit as much about community as it is about physical closeness.
They don't recognize the strength that has been present as religious communities come together virtually to pray, to demonstrate compassion, to mourn, and to look to a better future.
They don't recognize that at the core of all religions is a deep belief in the well-being, both spiritually and physically, of all people.
They don't recognize that religion and science are not at odds with one another and that religious leaders can celebrate the knowledge science offers.
And they don't recognize that the vast majority of clergy do not see themselves as pawns in a manufactured culture war.
****
Note that I am a proud signatory of the Clergy Letter Project that he mentions.

I wish to get back to "normalcy" as much as anyone, But why now for houses of worship?  What exactly are we trying to prove?  Whose God are we trying to dare?  Where in our Bible does it say that machismo is a prime spiritual value?

Zechariah said, "Not by might, not by power but by my spirit, says the Lord of Hosts."   Zechariah said nothing about returning prematurely to our pews as a prerequisite.  The spirit knows no physical space limitations.

I am appreciative of the way we have managed to adapt our spiritual offerings to the current predicament.  Judaism has always been supremely adaptable and we - of all faiths - know how important it is to be able to function beyond the walls of a single building.  We who have so often left our spiritual abodes - even our countries - at the drop of a hat, understand that deep communal ties can be forged even in a world without walls.  The three Abrahamic faiths are named for a guy whose first religious act was to "get out," to leave his homeland and wander to an unknown place.  We can take a few more weeks - or even months - of wandering in Zoomland and not only survive, but thrive.

I can see why many businesses, or schools and camps, might be on a different return schedule.  But why us?  Even some evangelicals are questioning the wisdom of the presidential pronouncement.  Given how many houses of worship have turned out to be super spreader hot spots, because of spacing, poor ventilation, the particular dangers of singing, the number of frail and vulnerable in our midst, and simply our human desire to hug one another, why is the opening of our buildings suddenly deemed so "essential?"

When it comes to reopening, heaven can wait!

Has Home Become the New Wilderness?

Have our homes become the new Wilderness? Hopefully we won't be wandering in them for 40 years, but the comparison has validity, given how much aimless wandering we've been doing within our four walls.  But the Wilderness can also be a place of growth, and the time of wandering a time of reckoning - the recognition of those things we've taken for granted.  As we began this weekend the book of Bamidbar (In the Wilderness) and we begin today the month (and week) of the giving of the Torah - which was given in the Wilderness - it is the perfect time to take stock, of how far we've come, and how far we have to go.
They camped in the wilderness: Torah was given publicly and freely, in a place belonging to no one, and all who want to receive and accept it can come and do so. To three things the Torah is likened: to the desert, to fire, and to water. This is to tell you that just as these three things are free to all who come into the world, so also are the words of the Torah free to all who come into the world. -  Mechilta Shemot
As Rabbi Lawrence Kushner wrote in Honey from the Rock,

In the wilderness your possessions cannot surround you. Your preconceptions cannot protect you. Your logic cannot promise you the future. Your guilt can no longer place you safely in the past. You are left alone each day with an immediacy that astonishes, chastens, and exults. You see the world as if for the first time.
Now you might say that the promise of such spirited awareness could only keep one with the greatest determination in the wilderness but for a moment or so. That such a way of being would be like breathing pure oxygen. We would live our lives in but a few hours and die of old age. As our ancestors complained, It is better for us to serve the Egyptians than to die in the wilderness (Exodus 14.12).  And indeed, that is your choice."
We are at home in the wilderness.  And if we leave our wilderness-homes too soon, we will end up back in Egypt, right back in that pre-Passover quarantine where we began.
The Journey - Mary Oliver
One day you finally knew
what you had to do, and began,
though the voices around you
kept shouting
their bad advice-
though the whole house
began to tremble
and you felt the old tug
at your ankles.
"Mend my life!"
each voice cried.
But you didn't stop.
You knew what you had to do,
though the wind pried
with its stiff fingers
at the very foundations,
though their melancholy
was terrible.
It was already late
enough, and a wild night,
and the road full of fallen
branches and stones.
But little by little,
as you left their voices behind,
the stars began to burn
through the sheets of clouds,
and there was a new voice
which you slowly
recognized as your own,
that kept you company
as you strode deeper and deeper
into the world,
determined to do
the only thing you could do-
determined to save
the only life you could save.
Wishing you a good Memorial Day, from the Bunker
Rabbi Joshua Hammerman