From the Rabbi's Bunker: May 5: We're all in the Same Boat; The Virtual Shul: Pros and Cons; Suddenly, We're all Observing the Omer - By a Hair; Mariachi Jewish Music 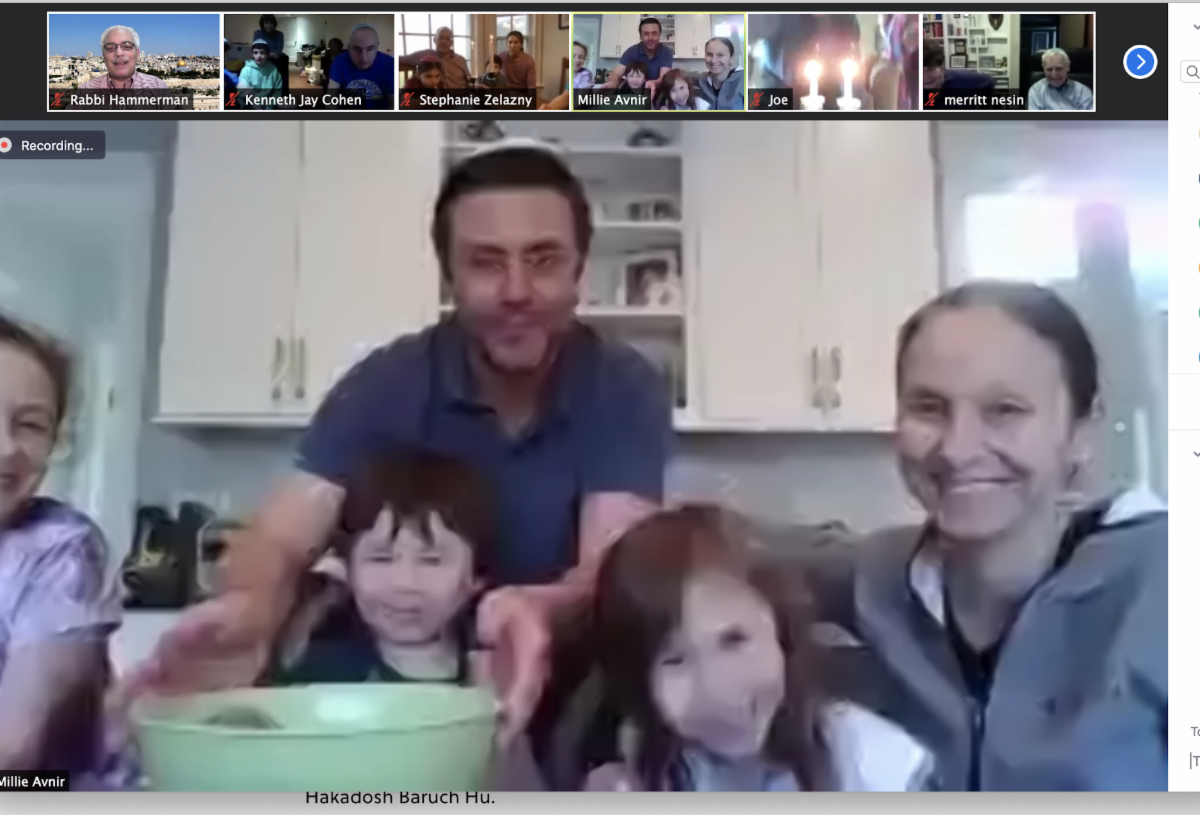 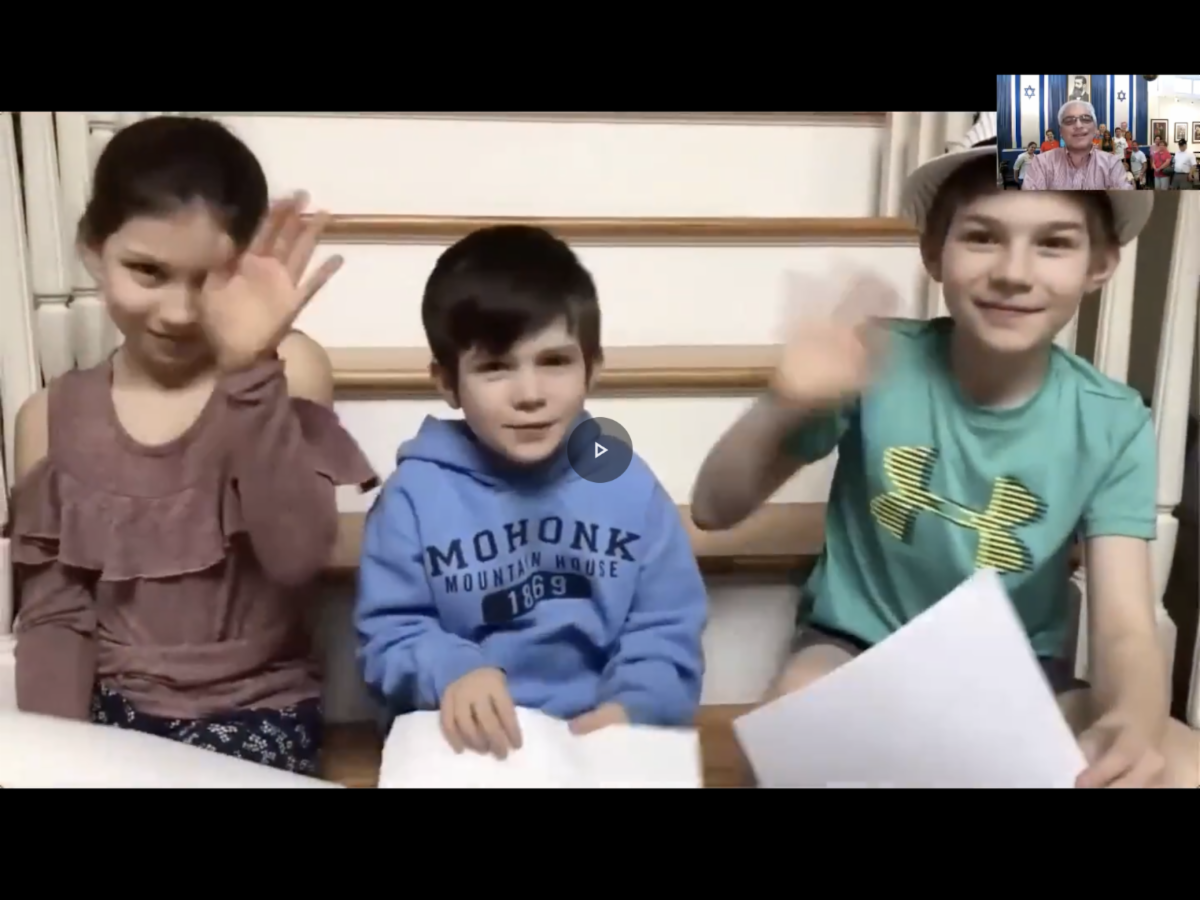 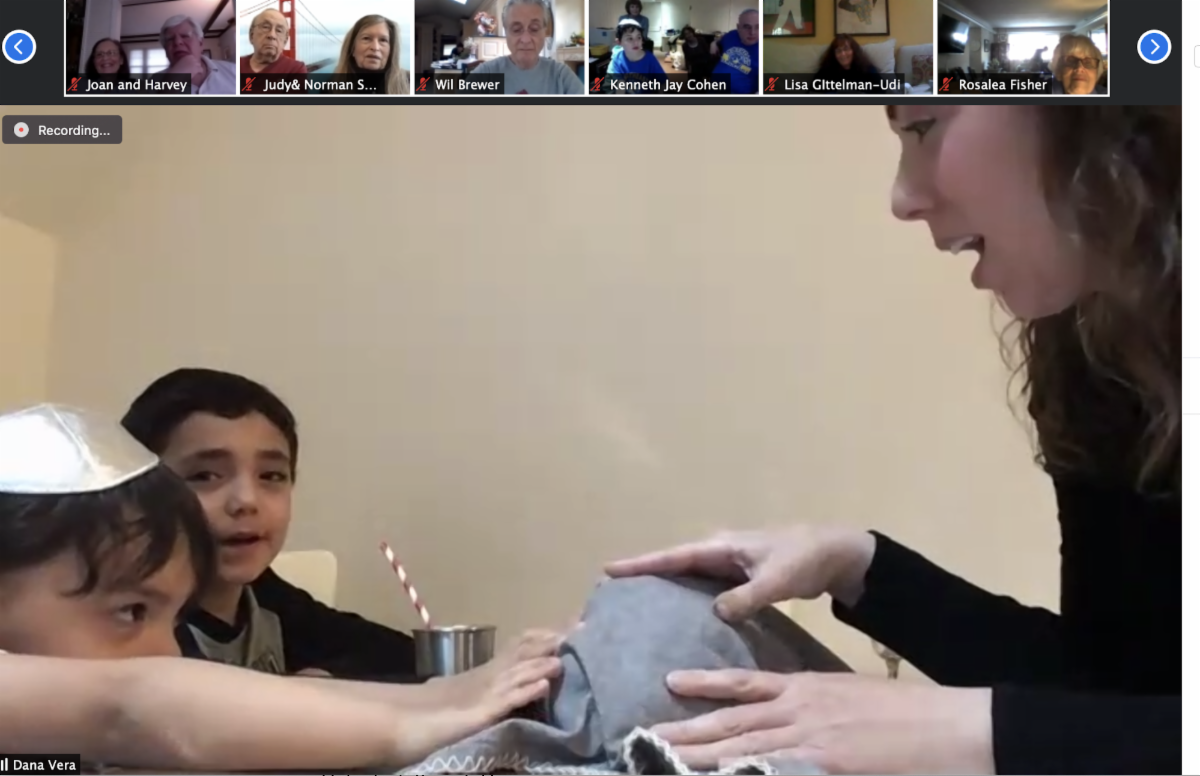 Kabbalat Shabbat last week featured our youngest students, who led parts of the service with their families. They did a great job!  Click here to watch a video of the entire service and here for more photos from our winter - spring photo album (scroll down)


The Misheberach: Several versions of this healing prayer for when a loved one is suffering.(MyJewishLearning)

Mazal tov to Beth Styles on her fantastic new interpretation of Adon Olam!

We're all in the Same Boat

Shalom from the Bunker - or more accurately, the Boat.

We are reaching the point of what people are calling "Quarantine Fatigue," which is leading many of us to let down our guard.

You see it happening in stores, parks and elsewhere, although most people are still following the guidelines, and a poll in today's Washington Post Americans widely oppose reopening most businesses, despite easing of restrictions in some states.

But people are getting restless, often arguing that distancing rules are infringing on their freedom.  On the front page of today's Boston Globe we see that expressed in a protester's sign: 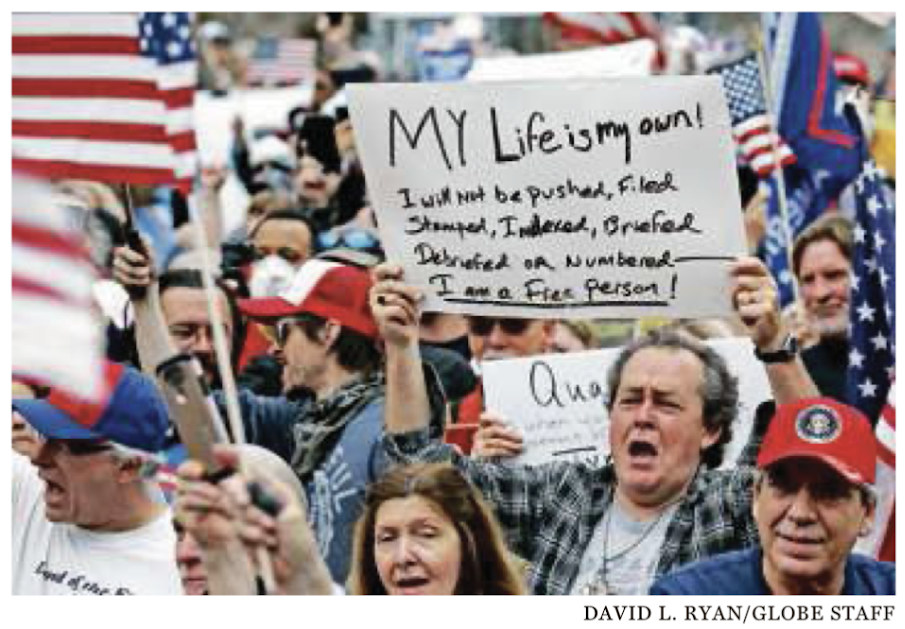 The claim is correct, to a degree.  Our lives are our own.  We value free choice just as we cherish free speech, but with each right we also accept limitations and the responsibility not to be reckless. If this man were to have his way, the state motto of New Hampshire would need to be changed to "Live Free AND Die."

We read in Midrash Vayikra Rabbah 4:6 (you can read the passage in full here):

"A man in a boat began to bore a hole under his seat. His fellow passengers protested. 'What concern is it of yours?' he responded, 'I am making a hole under my seat, not yours.' They replied, 'That is so, but when the water enters and the boat sinks, we too will drown.'"       -Rabbi Shimon Bar Yochai
The disease is hard to see, so we might be lulled into a false sense of security.  (Incidentally, please understand that whenever someone calls it "The Invisible Enemy" they are using a common anti-Semitic trope, rhetoric often used in medieval blood libels against the Jews and in the infamous "Protocols of the Elders of Zion.") But the person who refuses to wear a mask or who insists on flaunting his resistance to distancing practices is boring a hole under his seat and sinking our boat.

Which isn't to say that there aren't very hard questions to address about when it will be appropriate to open up parts of the economy and how mindful government should be to minimize the losses of workers and save small businesses from going under.

This is one of the greatest challenges our country has ever faced and we are facing it along with most of the rest of the world. Hence the need to join forces in seeking a vaccine and treatments.

Each step of the way we need to recall that we're all in the same boat.

The Virtual Shul: Pros and Cons

Aside from the horrific toll of Covid-19 in mortality and the economy, there's been much collateral damage to cherished institutions within the Jewish community.  Some are going to survive, others may not.  Summer camps are now cancelling, which is a huge loss for those who run them (as well as emotionally, for the campers and their parents).  Some organizations are dealing with enormous fundraising shortfalls.  I'm especially concerned about Jewish journalism.  The New York Jewish Week and other longstanding newspapers are having to furlough staff and remaining employees are who dealing with Depression-era budget cuts.  The London Jewish Chronicle has been around since 1841 - until last month. The largest Jewish periodical in Canada, the Canadian Jewish News, has also disappeared.

Synagogues face a great deal of uncertainty too, especially as we look ahead to the upcoming High Holidays.  The Rabbinical Assembly is joining with other arms of the Conservative Movement in a task force to begin exploring options - and we will be doing that too.  But the synagogue has also reasserted its centrality during this time.  We've seen it in an upsurge of attendance at services and - sadly - in the increasing need for solace and comfort in the face of such staggering losses.  I've seen it in your responses to these dispatches and in the many emails and calls I've fielded - and I beg your forgiveness for not always responding as promptly as I would want.

But as we now head into our third month of virtuality, we can begin to speculate on whether what we are experiencing online is truly satisfying our crying need for community and connection.

Here's some of what he had to say:

I miss my synagogue. I miss the rabbis and cantors. I miss the people who come to daven. I miss the schmoozing before and after Shabbat services, and the punch and cookies that we devour when the service is over. I miss the synagogue building where I have been worshipping for 37 years, and the safe and comfortable feeling that it gives me....And this too: I am growing tired of all the well-meaning people who keep trying to tell me how wonderful technology is; and how meaningful virtual Judaism is; and how beautiful lifecycle events can be on a computer screen; and how we are all going to emerge from this crisis better off, with new Jewish paradigms and a reordering of our Jewish reality.

We need to see virtual Judaism for what it is: A temporary expedient that helps us to feel less alone. It is surely better than nothing, and for most of us, considerably better than what we expected it to be. Indeed, the comment that I heard most frequently from Jews who had just experienced their first virtual Passover seder was "that was a lot better than I imagined it would be."

But virtual Judaism is also flawed, limited, and deeply unnatural.  We are social beings, hungry for human contact. As the saying goes, we need both the face and the Facebook. And this means that as Jews we want communities that are grounded, concrete, and tactile. In our synagogues, we give expression to this desire in a variety of ways--with physical gestures and the locking of eyes, or with hugs and back pats.

He goes on to say that the synagogue has thrived during this crisis in one notable way:

If our synagogues have been strengthened by this pandemic, it is not because of the technology they have provided or the on-line services they have developed. The synagogue, it seems to me, is the ultimate hesed community, and the COVID-19 pandemic has pushed the synagogue to do what it has always done but do it more effectively and emphatically.

And its greatest accomplishment is not online worship services but connecting Jews to each other, reaching out to the lonely and isolated, supporting the poor and shopping for the elderly, and teaching Torah to those who crave meaning.

But in the days ahead, all of this will not be enough.

As our country faces continued economic peril and psychological torment, and the synagogue itself is severely challenged by issues of finances and membership, the solution will be much more than virtual Judaism.

Synagogues will need instead to hone their hesed instincts, which have already been activated but not enough. They will need to address the practical, political, and spiritual problems of the Jewish community and America at large. They will need to reach out to the most vulnerable populations - older adults and people with disabilities - in their own congregations and in the broader community. They will need to join the efforts to extend healthcare to all Americans.

And they will need to offer Jews a sense of connection and belonging, while making the case to America that all Americans still need one another, and not just virtually.

Can the American synagogue do this, to save itself and to help America in its time of need? Yes, by understanding that we must resist the flight into solitude that the pandemic has imposed on us. By recognizing that technology is a helpful but limited and sometimes dangerous tool in combatting the isolation that we dread. And by remembering that hesed and the moral ideals of Torah are key, for they call on us neither to forsake nor accept the world, but to change it for good.

This topic is worth pursuing in discussions over the coming weeks.  Has the experience of "going virtual" enhanced your spiritual life, or has it been frustratingly lacking?

Given the historical nature of these times, I recommend that we all compose our own dispatches from the bunker.  I'd be especially interested in reading about your experiences of our services and events (like classes or the Zoom seder).  Are there moments that were particularly meaningful for you? 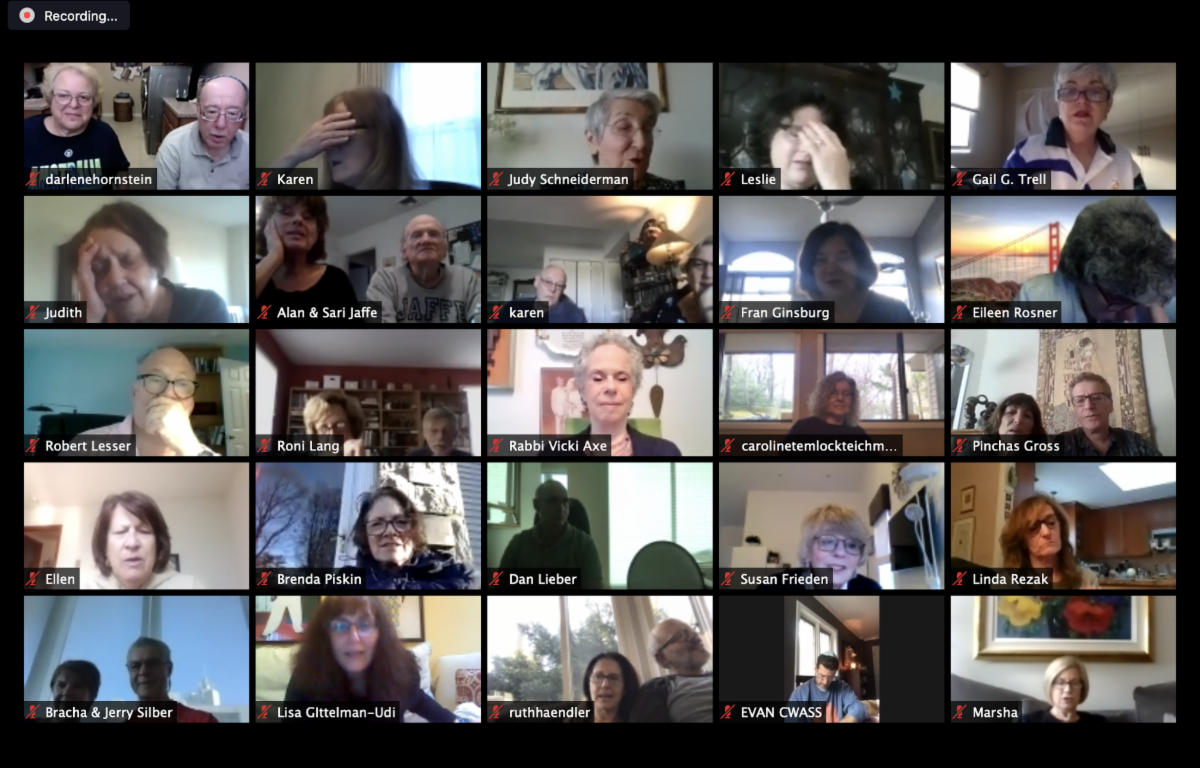 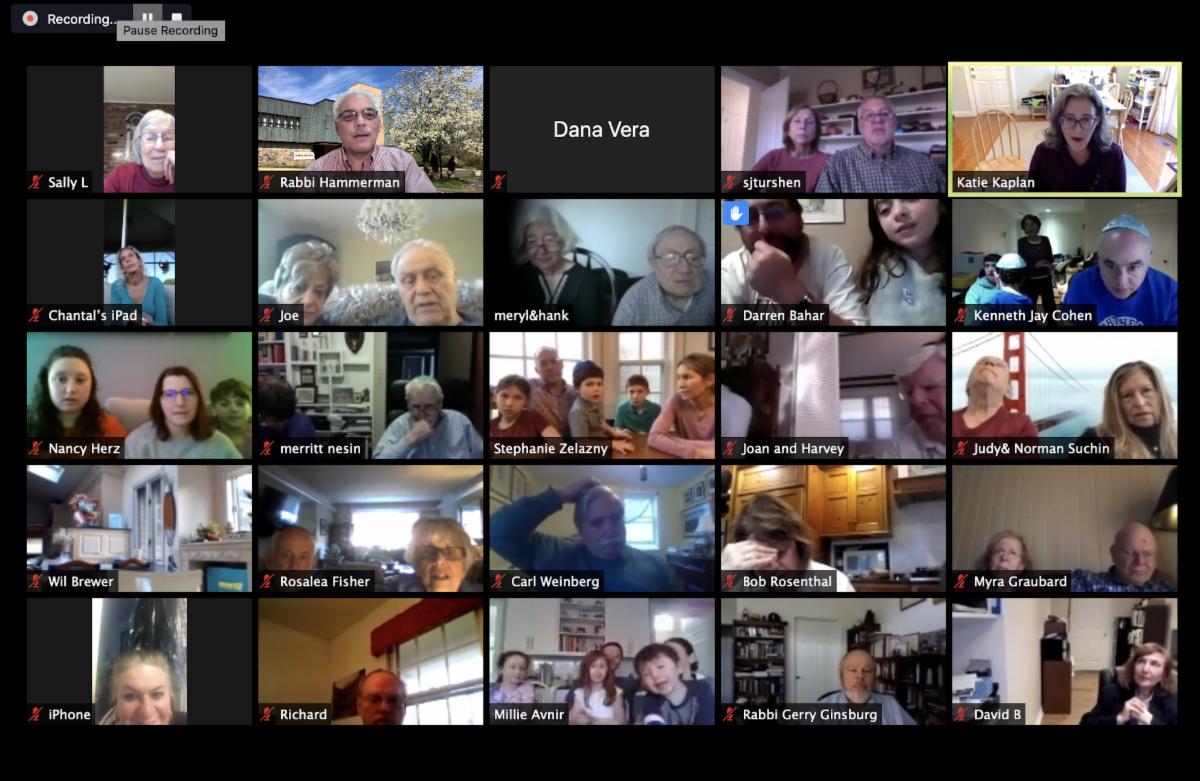 Suddenly, We're all Observing the Omer - By a Hair
The Omer, that period of counting between Passover and Shavuot, has much in common with our current predicament.  It is seen as a time of uncertainly, marked by certain customs of semi-mourning, like refraining from weddings and not cutting one's hair.  One of the reasons cited for this anxiety and sadness involves a plague during Roman times, which mysteriously lifted on Lag B'Omer, the 33rd day of the counting, which falls next week.

Lag B'Omer is a time when these mourning practices are cast aside, and lots of Jews get haircuts.  Well, this year, some businesses will be opening in Connecticut on May 20 (we can debate the wisdom of that elsewhere), which will become sort of a secular Lag B'Omer for many.

But the problem for some Jews observing this custom (and it is a custom, not a law) is that May 20 is after Lag B'Omer but before Shavuot, so haircutting restrictions would still be in place.  So is it permissible, this year, for those Jews to "break" the Omer custom and get a haircut on May 20?

The Rabbinical Assembly is on it!   Below is their reply: 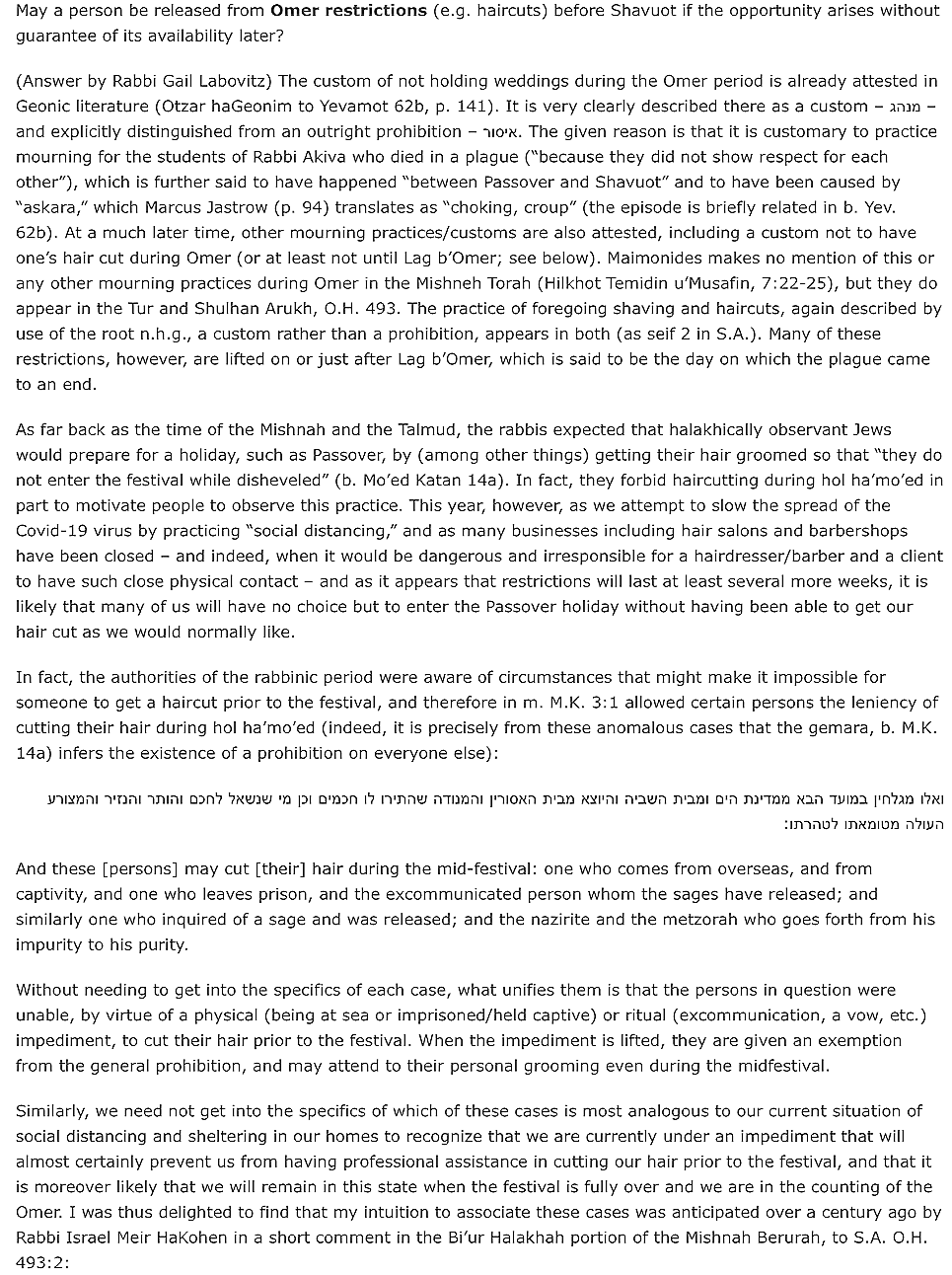 To My Children in the Fourth Week of the Pandemic (ritualwell)

I am sorry
you cannot play
with your friends
can't touch the
swings the monkey
bars the slide
can't have a
birthday party when
you turn eight
next week can't
go to school
can't visit your
grandparents
your little cousins
in the fourth
week of this
new regime, I
hear myself say
no no no and
realize that in
normal times to
withhold these simple
joys from you
would be cruel -
but these are
not normal times
here is my
wish as your
mother: that one
day when you
are grown you
will understand these
days are filled
with the "no"
of love which
opens the door
to a million
days of yes
-----