From the Rabbi's Bunker and Shabbat-O-Gram, April 17: Mourning Has Broken, God's Quarantine 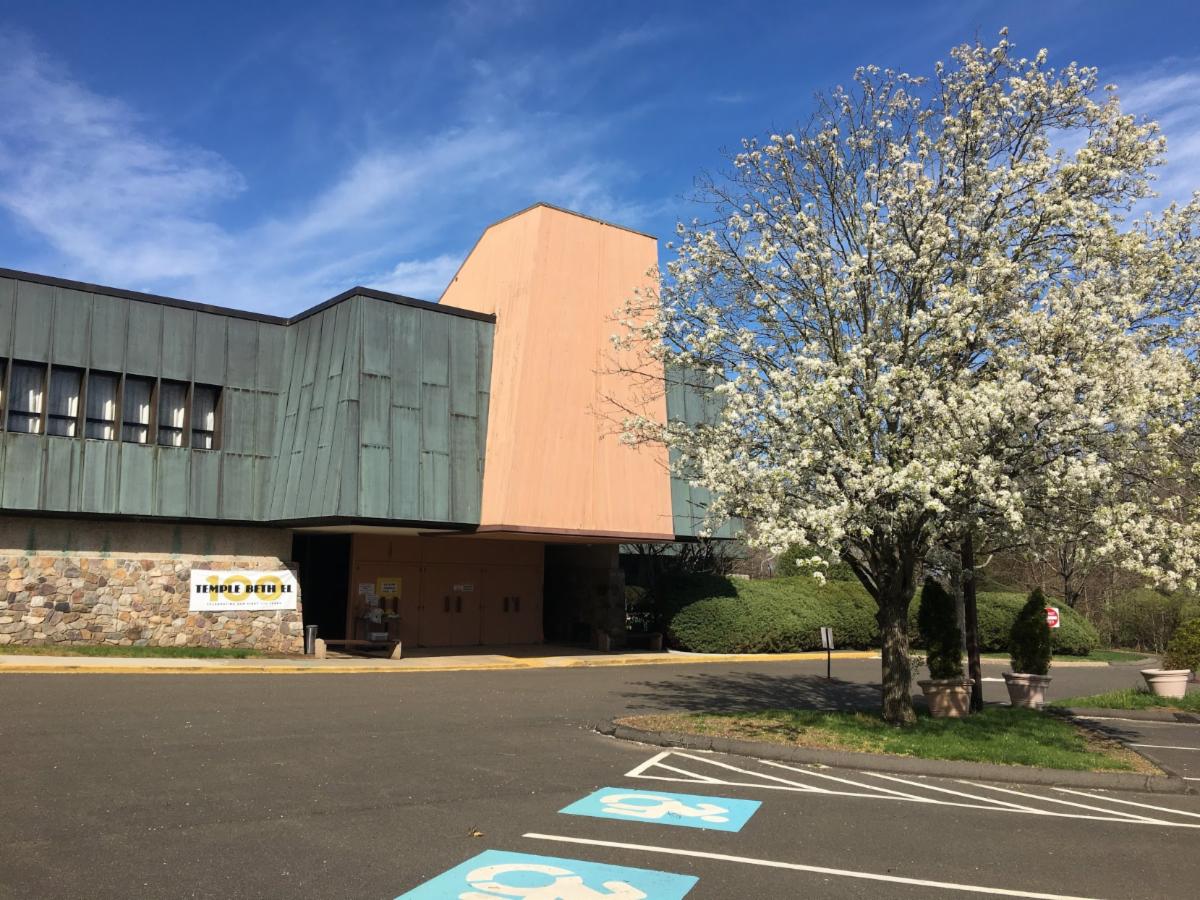 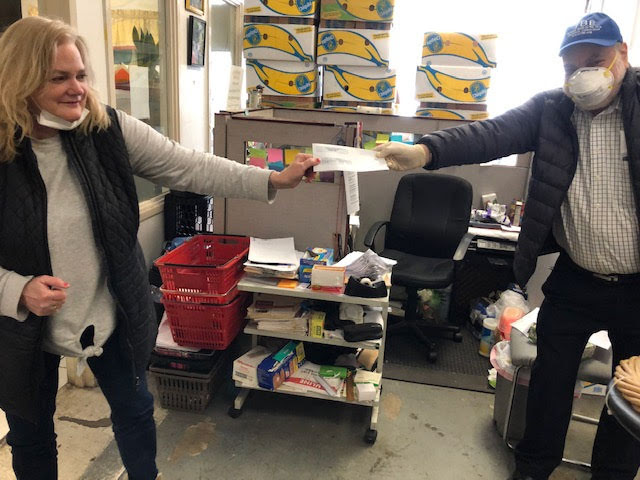 Also on Tuesday, Steve Lander brought down 61 more bags of food to the Food Bank and presented Kate Lombardo, executive director, a check for $1,426 from TBE members. "When I returned to the office," Steve adds, "there was another check for $1,000 for the Food Bank."
And check this out! 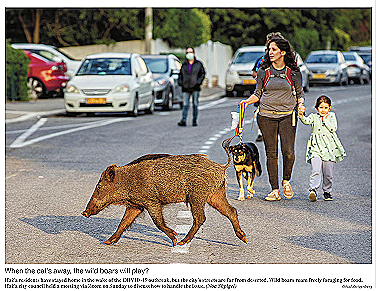 First there were jackals in Jerusalem,
now wild boars on the streets of Haifa, per this photo from Ha'aretz.

With Pesach now behind us, the Jewish calendar moves inexorably forward, toward Yom Hashoah, which falls on Monday night and Tuesday.  This year is the 75th anniversary of the end of the Holocaust and the liberation of the camps.  Our seventh graders, along with Katie Kaplan, will join me on Sunday at 1 PM as part of our regularly scheduled Sunday Healing & Hangout, to commemorate Yom Hashoah.  If you have a yellow candle or other yahrzeit candle, we will be lighting them at that time and it would be nice to see many lit together on the Zoom screen.
The Zoom link is here - Password: 095800  Meeting ID: 866 408 956

Join Beth Styles and me tonight for Kabbalat Shabbat at 6 PM and Rabbi Ginsburg on Shabbat morning at 11 to discuss the Torah portion.  And on Monday evening at 7, I'll be joined by Rev. Mark Lingle and Dr Kareem Adeeb in an interfaith dialogue on the spring holidays and the coronavirus.

Some recommended reading and viewing: 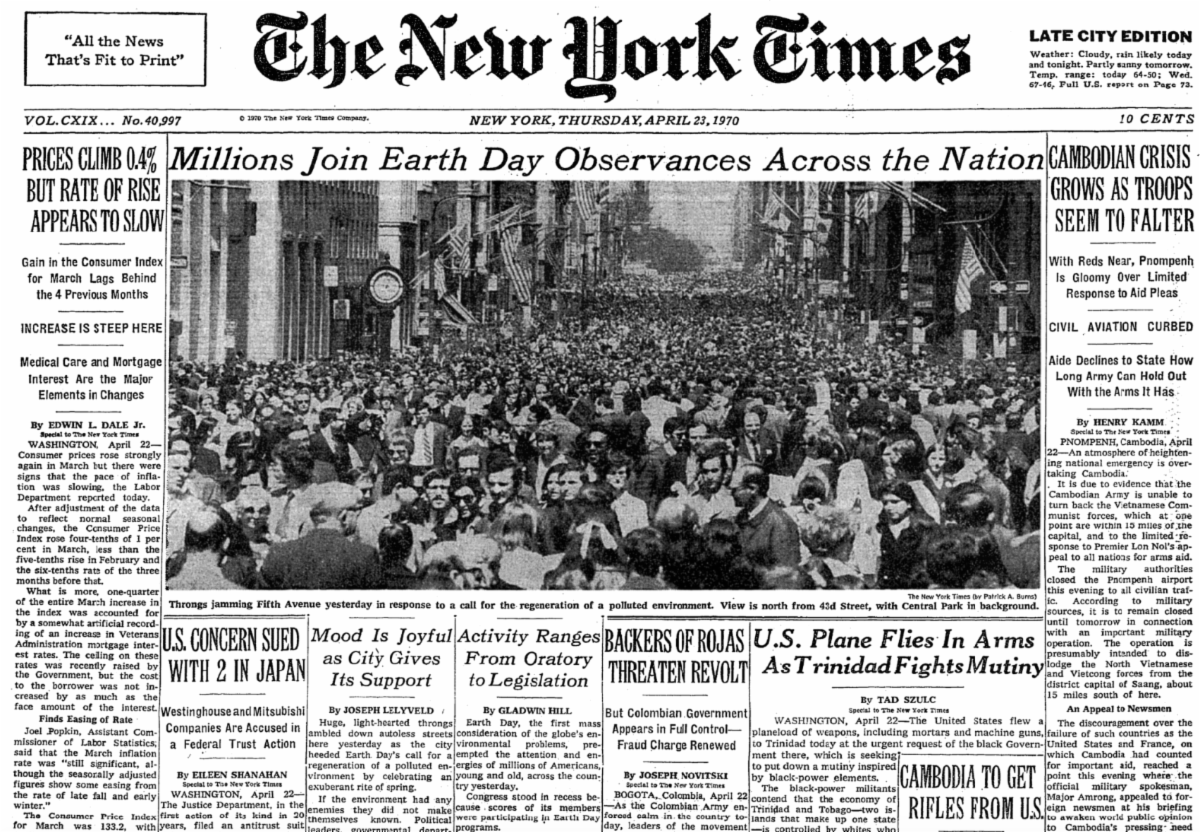 
I Left the Satmar Community and Unorthodox is Grossly Inaccurate  (Forward)

Our Pandemic Summer: The fight against the coronavirus won't be over when the U.S. reopens. Here's how the nation must prepare (Atlantic)

I led services yesterday from the mystical Ari Synagogue in Safed...virtually.
You'll never guess where I'll be leading services from this evening! 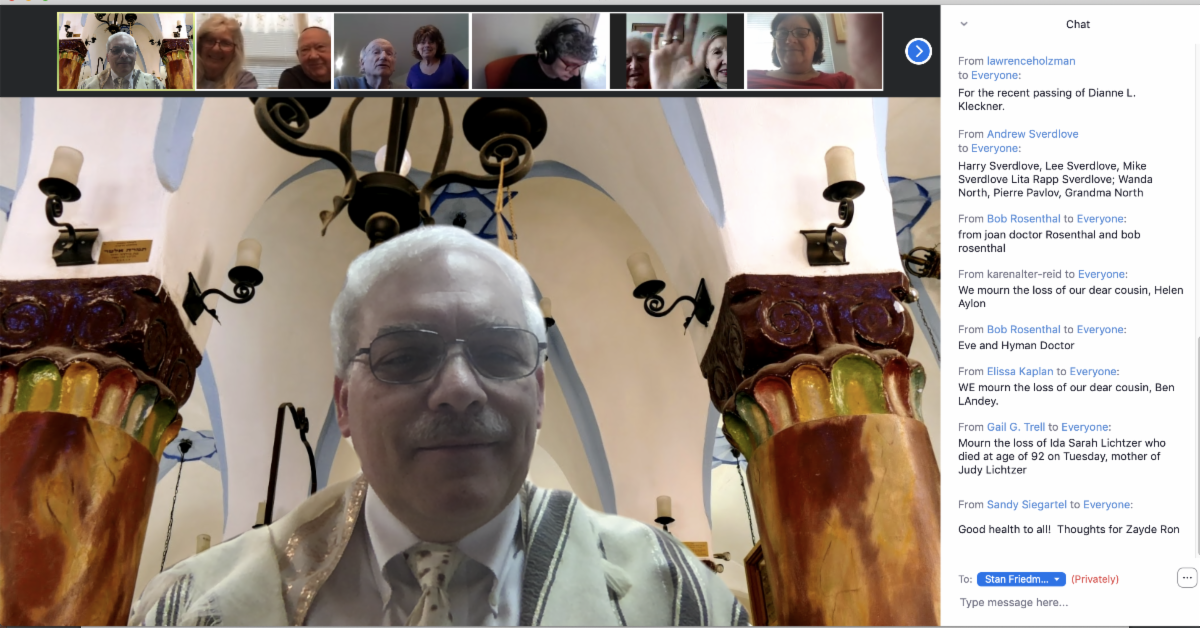 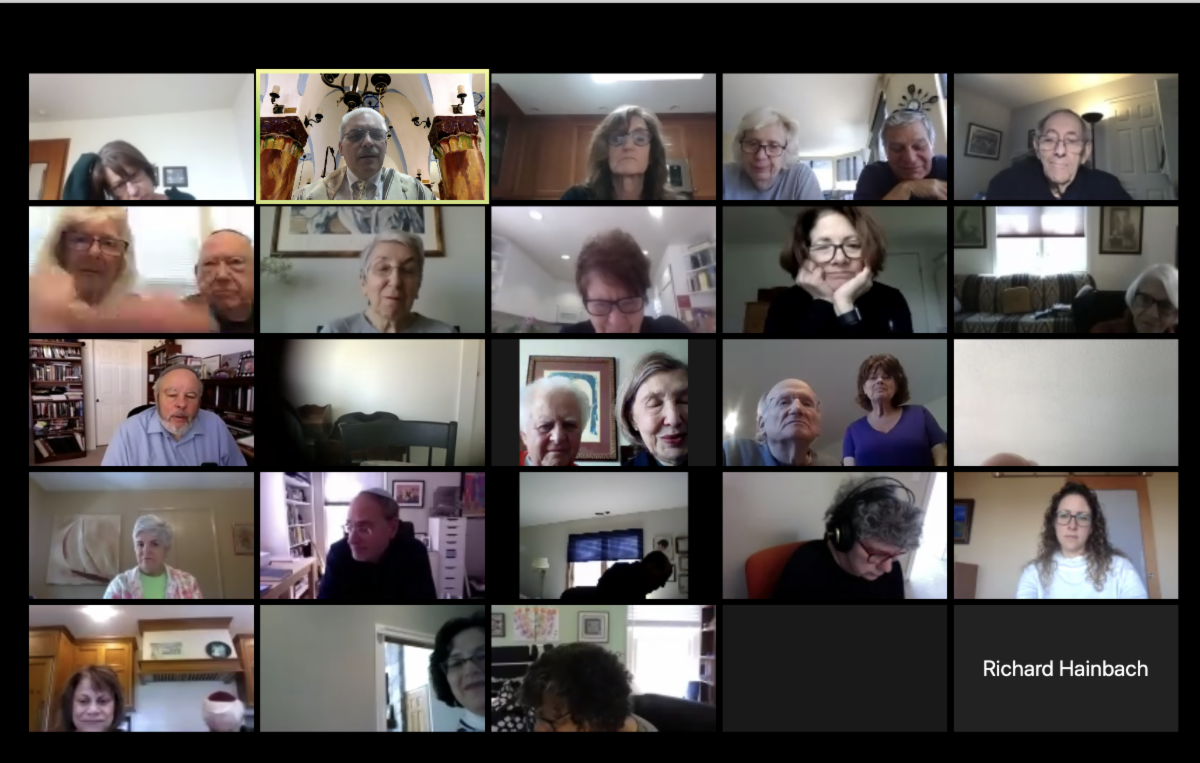 You look like you could use a hug.  Everyone needs one.  Thanks to Rev Mark Lingle for sharing this video, guaranteed to put a smile on your face.

There is enormous sadness surrounding us right now, as we contemplate unfathomable losses. I read this morning of Margit Buchhalter Feldman, a 90-year-old Holocaust survivor from Somerset, N.J., died on Tuesday, one day before the 75th anniversary of her liberation from the camps.  What the Nazis were unable to accomplish, the coronavirus did.

But neither the Nazis nor Covid-19 could crush her spirit, nor can they crush ours. This morning I was up at 5 (Sleep schedule? What sleep schedule? I've even got a dog with insomnia).  Determined to boost my immunities, because that's what we are supposed to do these days, I took a chilly and invigorating 5:30 walk, accompanied only by a chorus of birds, and, in one part of the sky, the post-Pesach quarter moon and the dawn's early light in another. I found myself praying the morning blessings (p. 103 in Siddur Lev Shalem), with a special nod to the commentary written many years ago by Pamela Cohn Allen of blessed memory, as she walked in nature on a morning much like this one.  She was fighting cancer at the time, but I share it with you knowing that right now, each of us is fighting our own private battles... 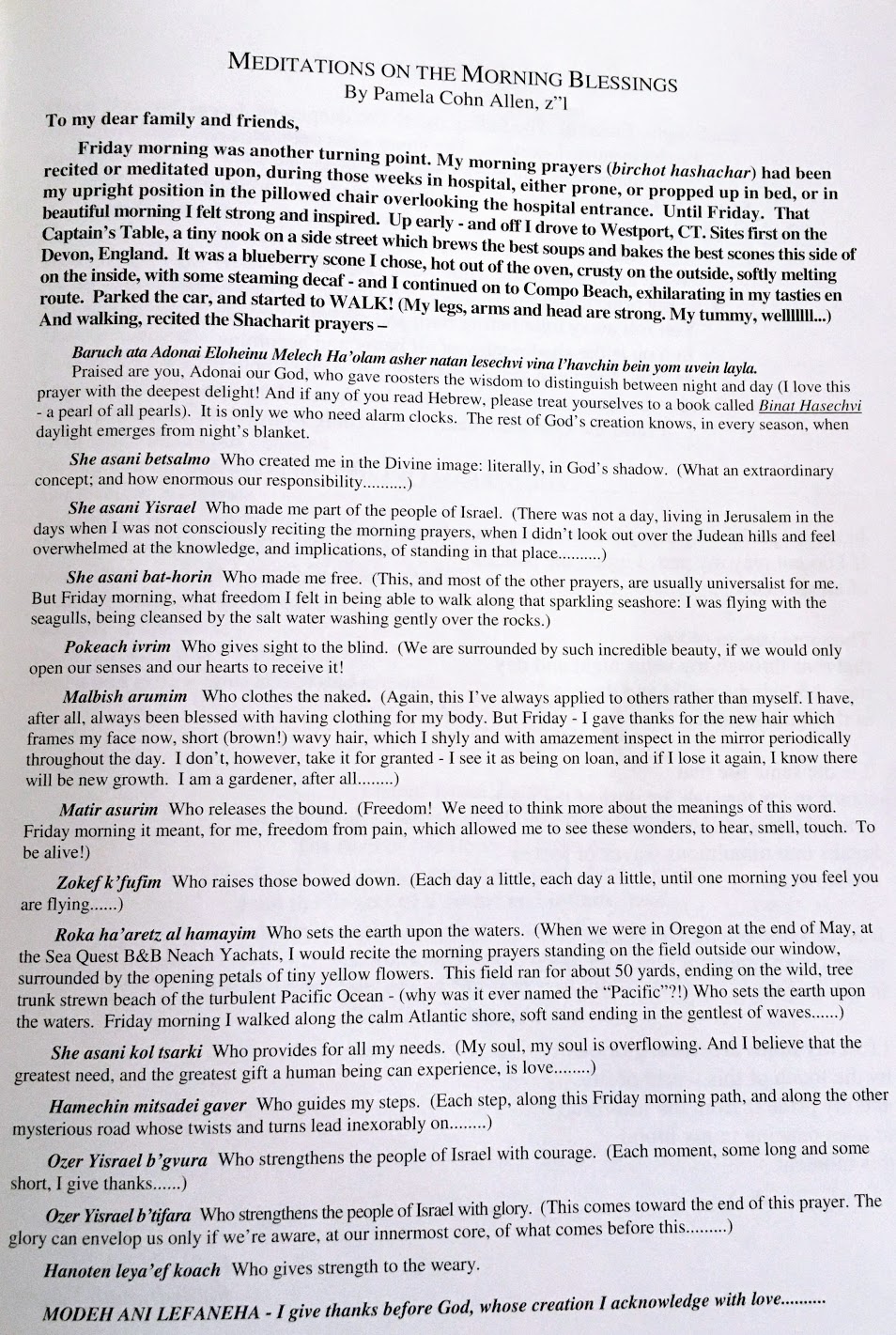 Pamela got me through half the walk, but when I got to Heartbreak Hill (Barncroft Rd - and hey, the Boston Marathon was supposed to be this week), I needed an extra boost, so I chose Cat Stevens' "Morning has Broken," which is based on a Scottish hymn and a poem by English poet Eleanor Farjeon, whose purpose was to inspire worshippers to give thanks for each day. Count me as duly inspired.

But if you are looking for a faster pace, try Ahinoam Nini (Noa's) "Keren Or" (Ray of Light)

Morning, loyal widower
Clutch your grey sack tight
From the north
And south to Yemen
Not a ray of light

No light, not a ray of light

Light a small white candle
In this darkened tent,
This heart of mine
From the north
And south to Yemen
Then a brilliant light will shine!

The light, the light will shine

Let it shine, indeed! And for a moment at least, mourning has broken.

And as a bonus, here's another upbeat, whimsical Noa  tune - with a little English sprinkled in, entitled, appropriately, "Boker" (Morning).

God's Quarantine:
The Divine Spark in the Human Heart

The Coronavirus pandemic has brought out the generosity of so many, including publishers.  The Koren Haggadah, by Rabbi Jonathan Sacks, one of this generation's great rabbis, was made free to the public for this year's holiday.  This Haggadah commentary, like Sacks' many other writings, is filled with wisdom and theological insights.  I was struck particularly by two that related to that most vexing of questions, one that bridges the span between Passover and next week's observance of Holocaust Remembrance Day.  After Auschwitz, how can one even speak of a God who is active in history, like the God of the Exodus and Sinai, the God who saved Israel at the Red Sea?

In back to back commentaries early in his Haggadah, Sacks shares Holocaust-related stories and in doing so, provides similar replies to that vexing question. In both cases, he demonstrates how a post Holocaust God can only be seen in human terms.  After Auschwitz, the God of Sinai has taken refuge in the human heart.  In the terminology of the day, we can call it God's Quarantine.
The first has to do with the Ha Lachma Anya passage, where Matzah, the "Bread of Affliction" first grabs the Seder spotlight. 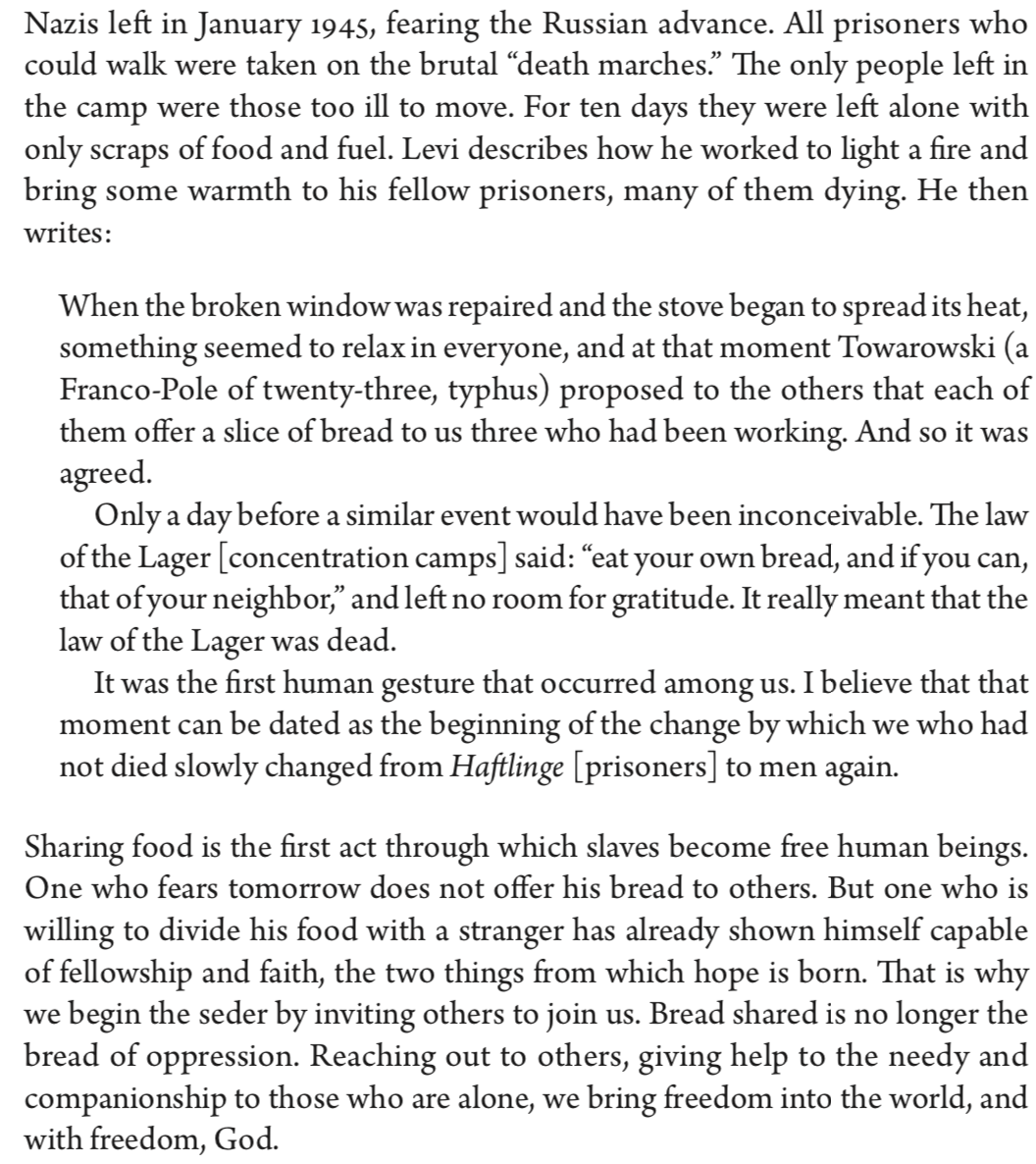 Primo Levi's story is inspiring, but Sacks struggles to gerrymander a post-Holocaust God into the Exodus-Sinai framework.   How human beings were able to maintain their dignity in this story - one might even suggest, their God-given dignity - does little to salvage divine justice or compassion from the refuse pile of the Holocaust experience.  The fact that human beings could be so incredibly magnanimous  -despite the inhuman conditions thrust upon them - neither comes from God nor leads one inevitably back to God, at least not the God of Moses, the One capable of splitting large bodies of water and inflicting salvific plagues on nasty despots.

In the dramatic scene recalled by Levi, the men involved are the true heroes, and indeed they restored freedom and human dignity to the world.  But did they restore God as well?

Sacks is doing what so many theologians have done since the Holocaust: he is trying to use the canon of the Holocaust to reinforce a pre-Holocaust notion of God.  He is still addressing the God of Sinai, not the God of Auschwitz, and so the story rings hollow.

Rabbi Sacks explains God's presence similarly in his next Holocaust-connected commentary in the Koren Haggadah. 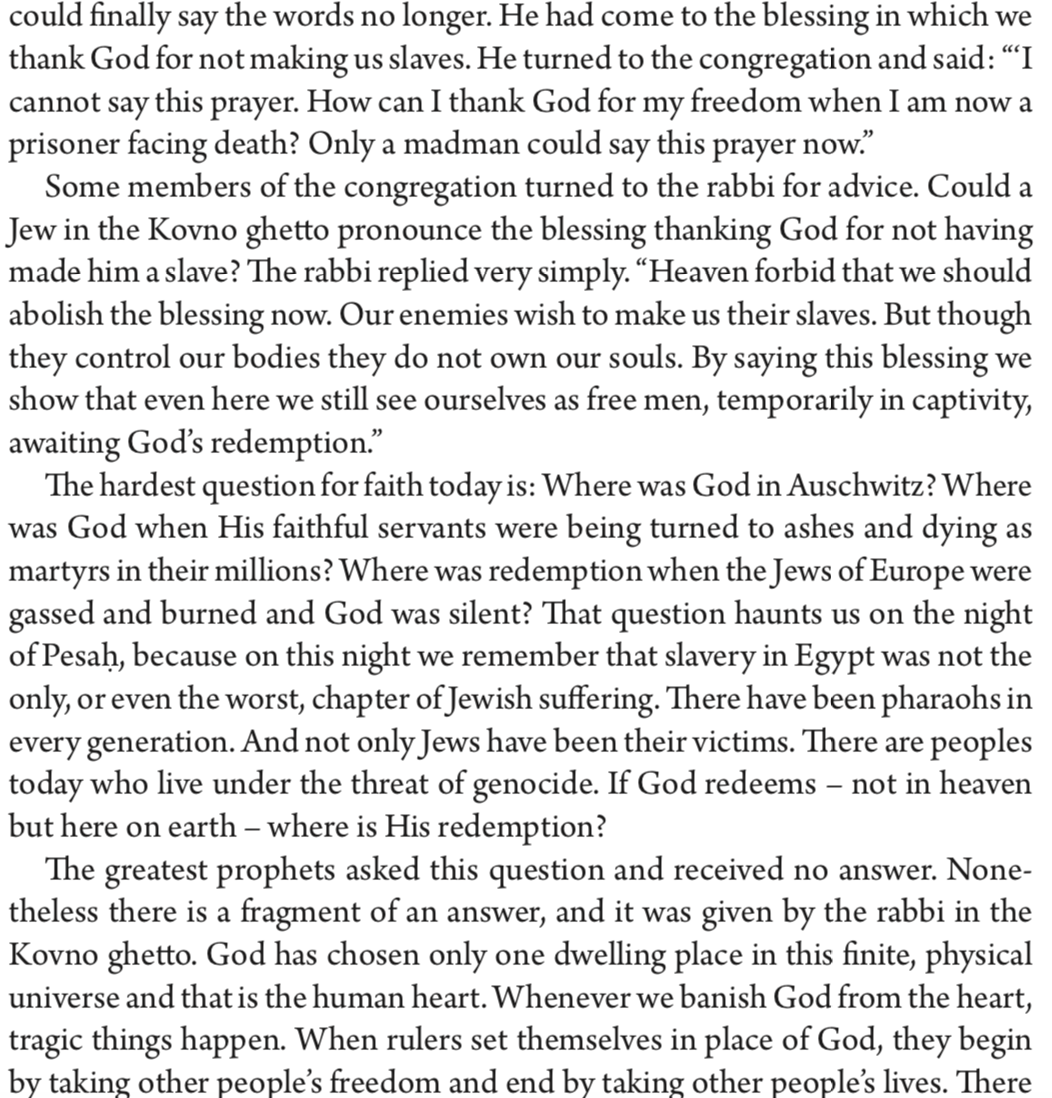 Should God tarry, Sacks is admitting, we need the courage to take matters into our own hands and bring justice to our world. Here he hints that there is no simple answer to the question of where was God at Auschwitz, but then he returns to the heroic human spirit and the assertion that the only world more terrifying than one with an absent God is one where autocrats try to fill that void.  We need to cling to the idea of God even in God's absence, if only to leave the vacancy unfilled, leaving it to modern Pharaohs presumptuously aiming to fill it.

So what are the implications now, in the Age of Corona?  With so many people using their precious freedom to share their bread, by helping neighbors in distress and in some cases risking life and limb to do that, are those people bringing God back into the world?  And if they are - and I'm not saying that they are not - could the massive human response to this plague (the good response, not the response of those who are cynical, selfish and corrupt) be the first step toward ending the plague of divine darkness, the eclipse of God that has darkened our spiritual world for 75 years?

In his classic 1952 essay, The Eclipse of God, Martin Buber wrote, of the "still unredeemed concreteness of the human world in all its horror." Buber's paper was an effort to rummage through the still-smoldering ashes for some way of comprehending the incomprehensible while reconciling himself to a world without an operational deity.  Now, more than half a century later, has God begun to peer back at us from out of the mist?  Is the darkness receding?

These hopeful albeit farfetched approach may be irrational, but it was Ben Gurion, hardly an apologist for God, who said that in order to be a realist you must believe in miracles. And no less a dreamer-realist than Elie Wiesel, who had every reason to succumb to despair, quoted Albert Camus, author of "The Plague" in a 2006 interview with Time:

"Camus said,'Where there is no hope, one must invent hope.' It is only pessimistic if you stop with the first half of the sentence and just say, There is no hope. Like Camus, even when it seems hopeless, I invent reasons to hope."
We join Sacks in inventing reasons to hope, if not for some manifestation of a traditional God, then at least for a notion of Ultimate Justice; because we desperately need the moral foundation laid out at Sinai, even as the God of Sinai has given way to the eclipsed, human centric God of Auschwitz. In that sense, we need God because no human being should ever be allowed to usurp that divine role. We need God to prevent extremists from perverting religious imagery to horrific ends.

And the best way to do that, Sacks asserts once again, is to place that divine spark, that Eternal presence, safely quarantined inside the human heart.