From the Rabbi's Bunker: April 27: A Very Different Yom Ha'atzmaut 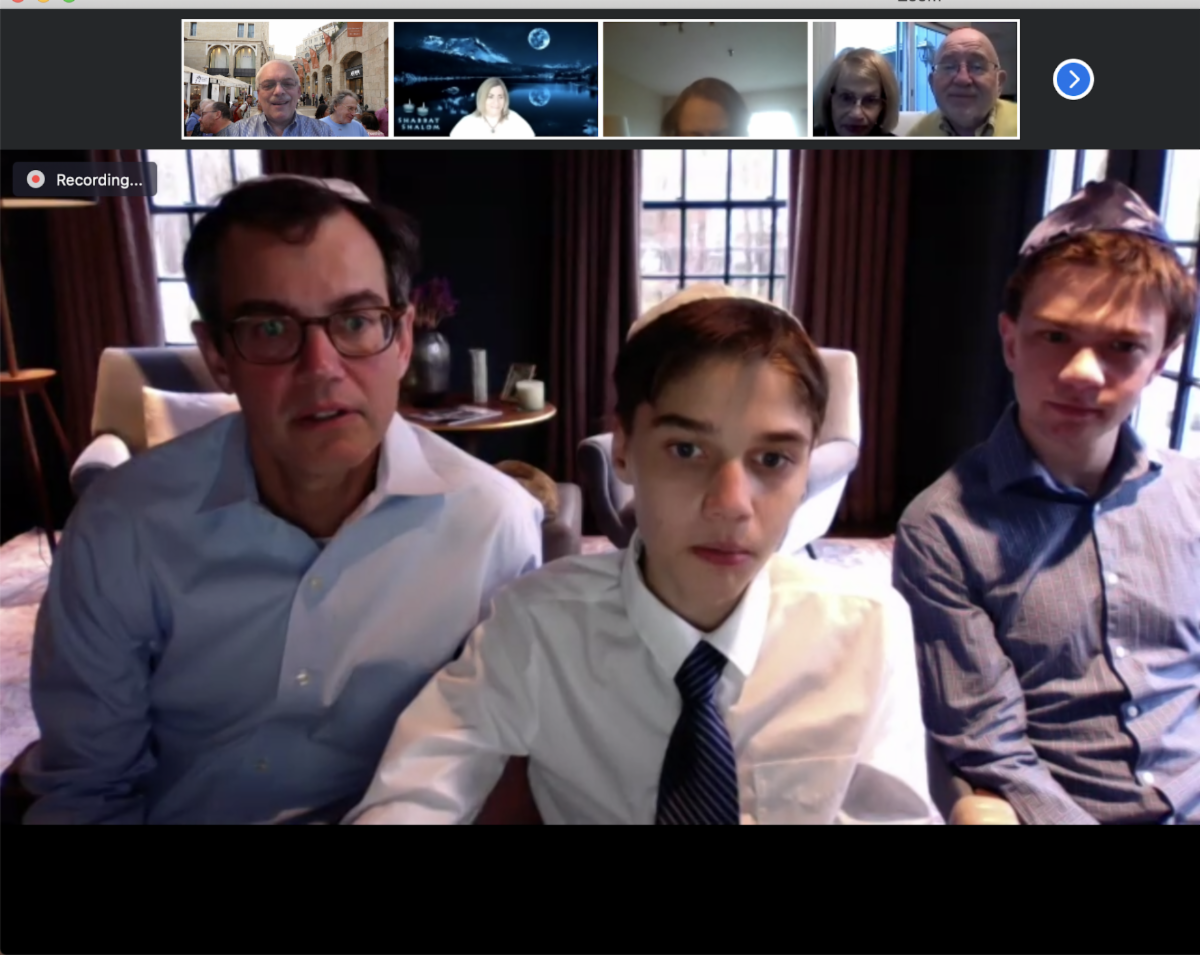 Last Friday evening, Brandon Nadel became our first-ever Zoom "Not Mitzvah."  His Bar Mitzvah has been rescheduled for the fall, but it would have been this weekend, and his speech was tailor-made for this portion. You can see the whole service by clicking here.  (Pre) Mazal tov, Brandon! 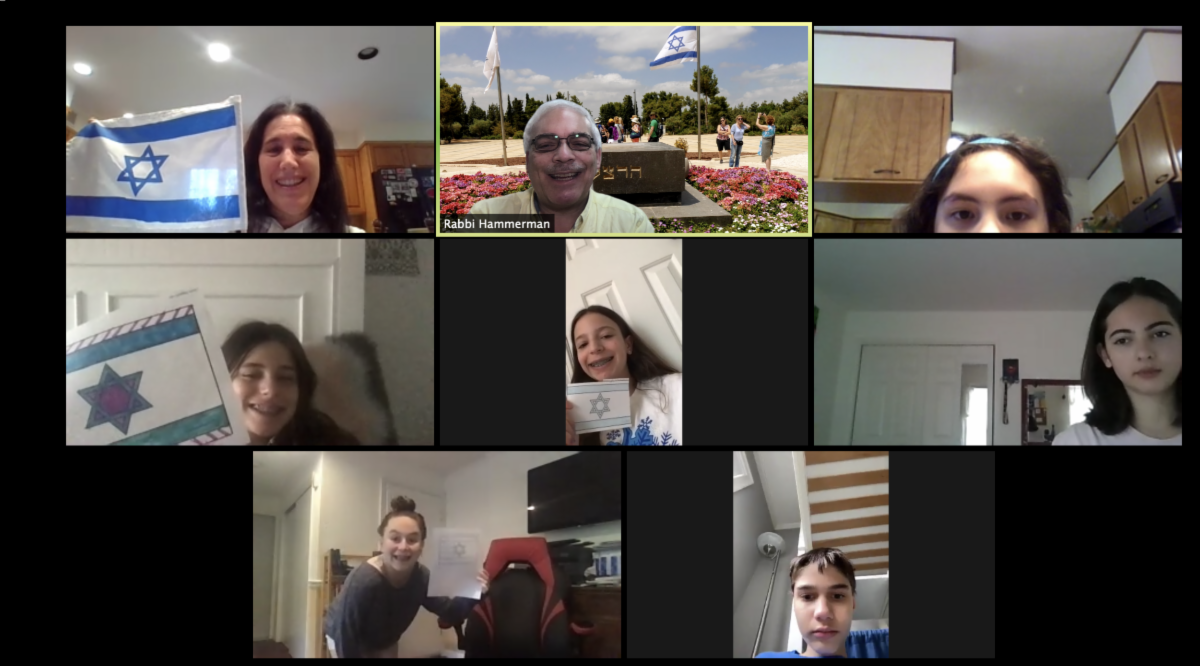 TBE 7th graders getting into the Blue & White spirit on Sunday

Don't forget our Yom Ha'atzmaut mini concert with Koby Hayon and Cantor Katie Kaplan on Tuesday evening at 7 PM.  As Israel approaches this auspicious moment, the reins of the lockdown have been loosened slightly and a new unity government appears ready to be convened.  But, like everything in Israel, it's complicated.

As Daniel Sokatch of the NIF writes, it's too early to know exactly what the government will look like, or how the courts will deal with the still unresolved issues of an indicted prime minister and his delayed trial, but we do know that the agreement hands critically important ministries - including Defense, Foreign Affairs and the Justice Ministry - to Blue and White MKs who are likely to be far more moderate than the current right-wing hardliners in those positions.  On the other hand, an agreement seems to be in place that would allow the Knesset to move forward toward annexation of disputed territories this summer. Sokatch continues:

In the face of efforts to shutter parliament, citizens took to the streets to register their dissent, flying black flags - in Israel, the symbol that democracy is in danger, that the public trust has been broken - from their cars.... Just this week, on the eve of the announcement of the new government, thousands of activists and citizens took to Tel Aviv's Rabin Square, and while taking pains to maintain appropriate social distancing, stood together for democracy and civil liberties in a time of emergency. These brave Israelis showed the world, as Time Magazine put it, what democratic protest looks like during a pandemic.

So we don't know what the future brings - and truthfully, Israel's future diplomatic course will be determined more by what happens here in the US over the coming months than anything happening over there. In today's Washington Post, Jackson Diehl points out that "Netanyahu was about to proceed with the settlements' annexation in early February when he was blocked by Trump senior adviser Jared Kushner, a prime author of the peace plan. The White House said annexation must await U.S.-Israeli agreement on a map of the exact boundaries of the seizure." So it's not a given that the Gantz-Bibi government will be allowed to annex, especially when the Saudis, Jordanians and Egyptians chime in.

I'm disappointed that progress on the pluralism and human rights fronts will be less likely, and as Anat Hoffman writes in Ha'aretz today, dissenting voices are stifled and ignored.  As she puts it, "Israel only engages with Diaspora Jews who marvel at its utter perfection."

The Israel I know as a native Jerusalemite is complicated and messy. I find the "messy Israel" to be a flawed, but nonetheless wonderful, place for hashing out issues and having a real impact. The State of Israel is where Jewish and democratic values play out, and where a multiplicity of (sometimes conflicting) voices are engaged in figuring out what, precisely, those values are or should be. Israel affects us and reflects on us, holding up a mirror through which we can see both the beauty and the flaws.
Pretending that everything is perfect might be momentarily gratifying, but I personally can think of nothing more important, meaningful, and ultimately beautiful than to be engaged in a dialogue about Jewish values and the Jewish State, and doing real work to help achieve those values.

Whatever happens, we do know that despite all odds, the Jewish state continues to persist, to grow and even to amaze and inspire us at times - even if Israel, like the US, now faces enormous challenges, both external and from within.

Daniel Gordis, in his new Times of Israel column, "Only Here," describes a phenomenon that has become more common over recent weeks, the balcony minyan - total strangers joining voices across courtyards and streets to assemble a quorum for prayer.

Within minutes, there were all sorts of voices, a chorus seemingly flowing from the stones. Men's voices, women's voices. Some children. A few people, secular by their looks, walked by on the street below, also looked for the source of the voice, and smiled. They might not have been participating, but they of course understood every word and were stirred by what they were witness to - this was theirs, too. So instead of praying downstairs in my study, alone, as I've done for weeks now, we found ourselves together on the porch, singing with people whom we'll never be able to identify, our collective voices rebounding off the buildings. As we were singing, mesmerized by the strangeness but also the wonder of the moment, it struck me: those very words - those exact same words - have been rebounding off of buildings around here for thousands of years. Many of the words we were singing were debated by the rabbis of old - the Talmudic Tractate Berakhot is a record of many of their conversations about what precisely the wording should be. And for millennia, now, we've been doing more or less what they prescribed. These neighborhoods, these hills, these stones, have been hearing those echoing words for thousands of years...
Even in the face of the fear, the hunger, the anguish and the unknown, many people in these neighborhoods will spend this very strange week heartbroken, to be sure, but also grateful beyond words to be in it with people whose lives are statements about where they want to be, no matter what:  Only here.
Only in Israel.
Film at 11...and 12...and 1 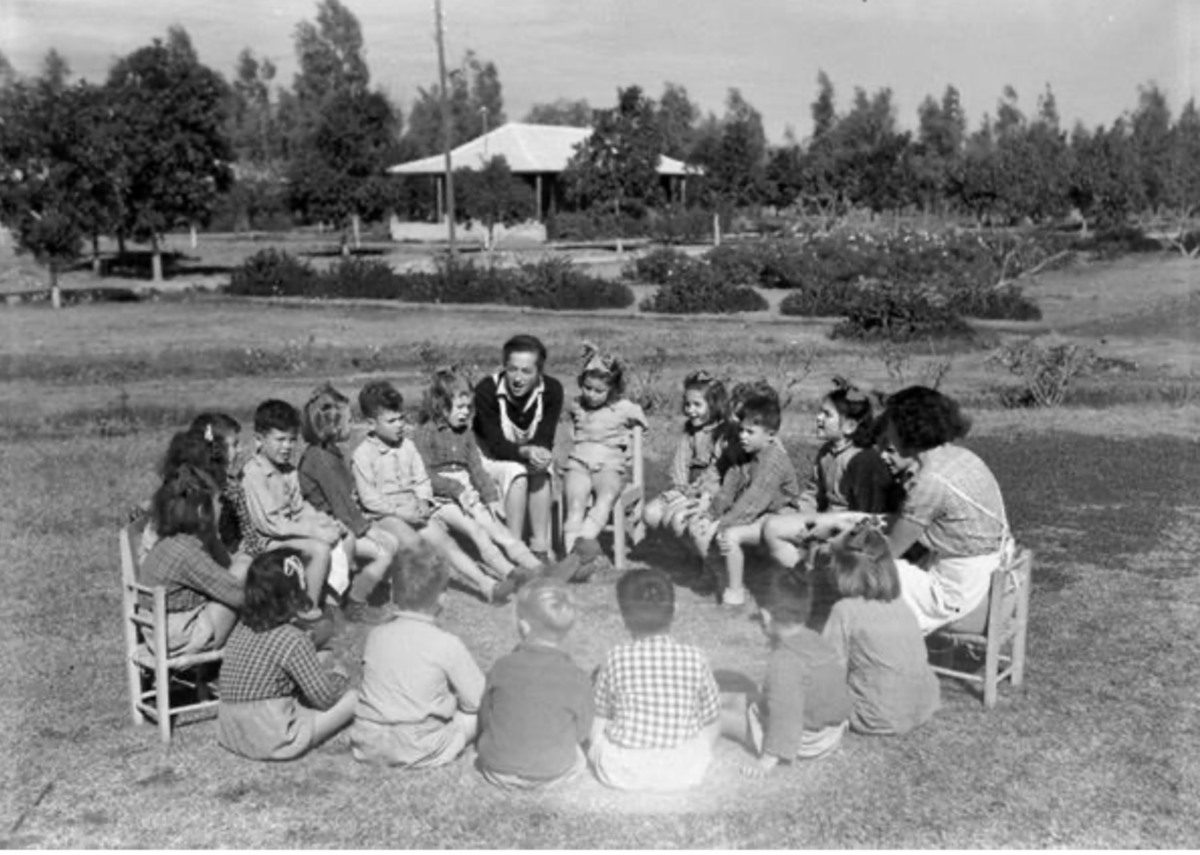 If you are looking to combine a desire to celebrate Israel's birthday with the pandemic pastime of movie binging, have I got news for you! The Jerusalem Post reports that after years of intensive work on digitizing its collection of Israeli film clips, the Israeli Film Archive is posting many of its gems online and plans to make more available, with the goal of eventually digitizing everything in its vast collection, more than 5,000 hours of film. The IFA features a copy of virtually every film ever shot in Israel, including feature films, documentaries, newsreels and home movies, with clips that go back to the 19th century, among them an 1896 film produced by the Lumière brothers shot in Palestine which is believed to be the earliest film made here still in existence. These films and clips provide a fascinating and unique glimpse into Israeli history; but in the past, only scholars doing research at the IFA had access to them.

Here are some vintage films to get you started:

Here's the playlist for the Spielberg Archives pre-state newsreels , as well as vintage photos.

If you are looking for a great read for yourself or a book group, take a look at this current best seller, written by the sister of TBE's Elisa Rosner.

Inspired by the true stories of Jewish children hidden during World War II, Jennifer Rosner's debut is a breathtaking novel about the unbreakable bond between a mother and a daughter. Beautiful and riveting, "The Yellow Bird Sings" is a testament to the triumph of hope-a whispered story, a bird's song-in even the darkest of times.

The novel has received starred reviews from Library Journal and BookPage, and has a wonderful Reading Group Guide (it is one of Macmillan's top book club picks).  Much more at http://jennifer-rosner.com/the-yellow-bird-sings-novel.html.

In Poland, as World War II rages, a mother hides with her young daughter, a musical prodigy whose slightest sound may cost them their lives.

As Nazi soldiers round up the Jews in their town, Roza and her 5-year-old daughter, Shira, flee, seeking shelter in a neighbor's barn. Hidden in the hayloft day and night, Shira struggles to stay still and quiet, as music pulses through her and the farmyard outside beckons. To soothe her daughter and pass the time, Roza tells her a story about a girl in an enchanted garden:

"The girl is forbidden from making a sound, so the yellow bird sings. He sings whatever the girl composes in her head: high-pitched trills of piccolo; low-throated growls of contrabassoon. Music helps the flowers bloom...."

In this make-believe world, Roza can shield Shira from the horrors that surround them. But the day comes when their haven is no longer safe, and Roza must make an impossible choice: whether to keep Shira by her side or give her the chance to survive apart.