From the Rabbi's Bunker, April 19: Why is Anne Frank Trending on Twitter? 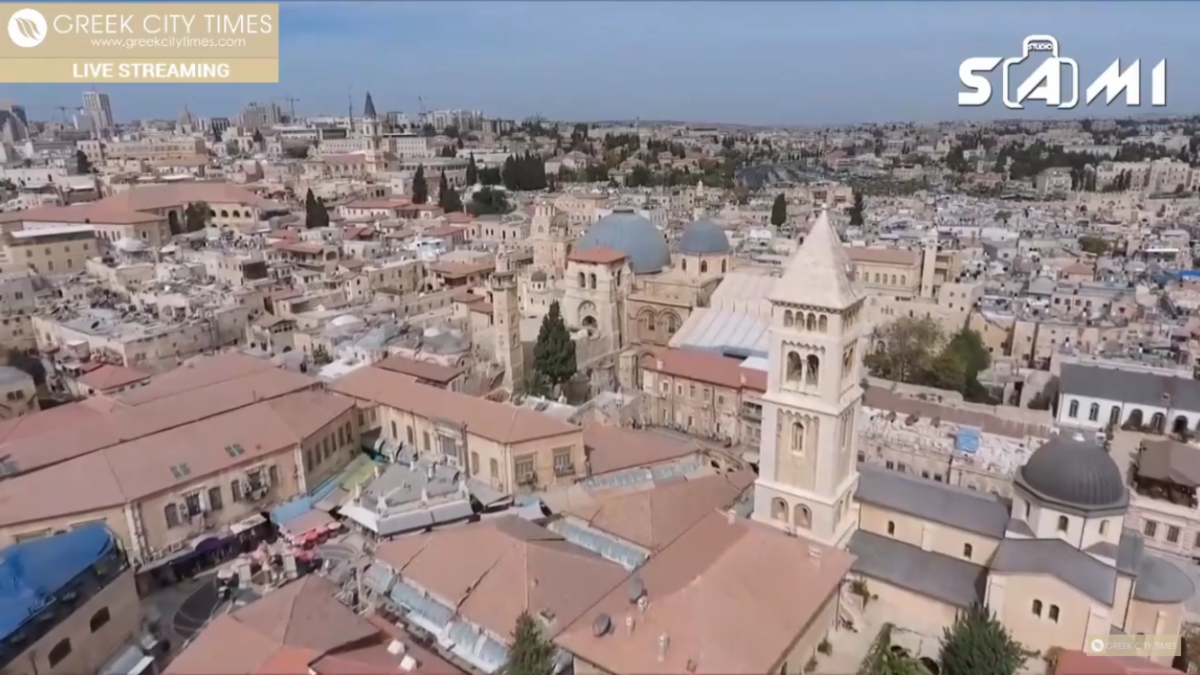 Yesterday was the Festival of the Holy Fire in the Greek Orthodox world, which coincides with the Greek Easter weekend.  Here's what it looked like outside the Church of the Holy Sepulchre, back when I lived in Jerusalem during rabbinical school. 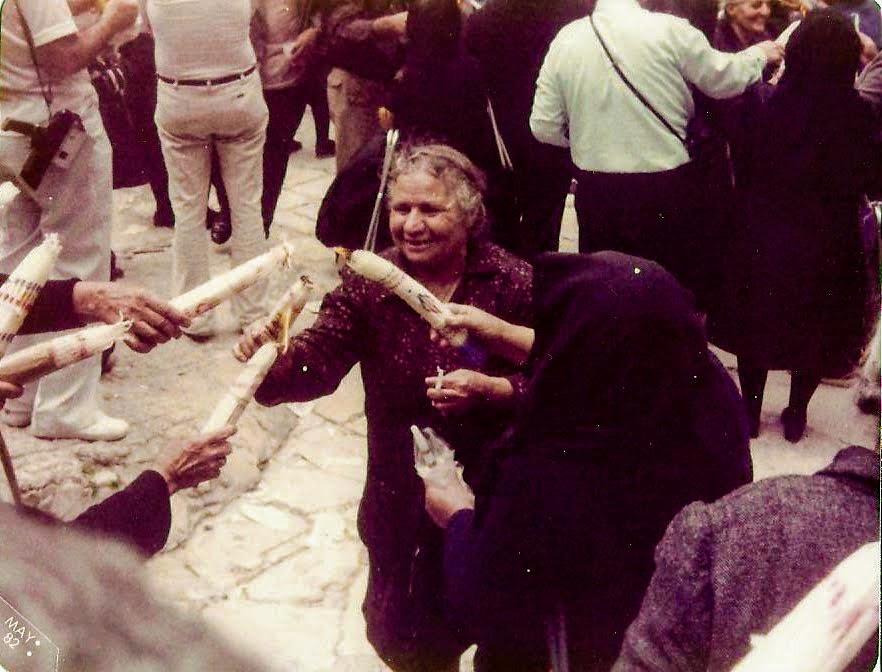 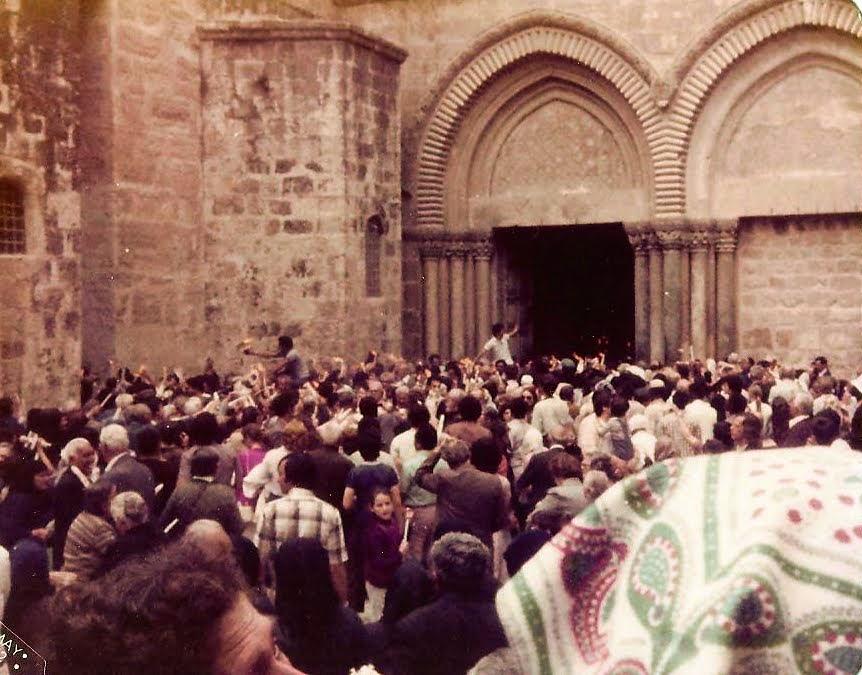 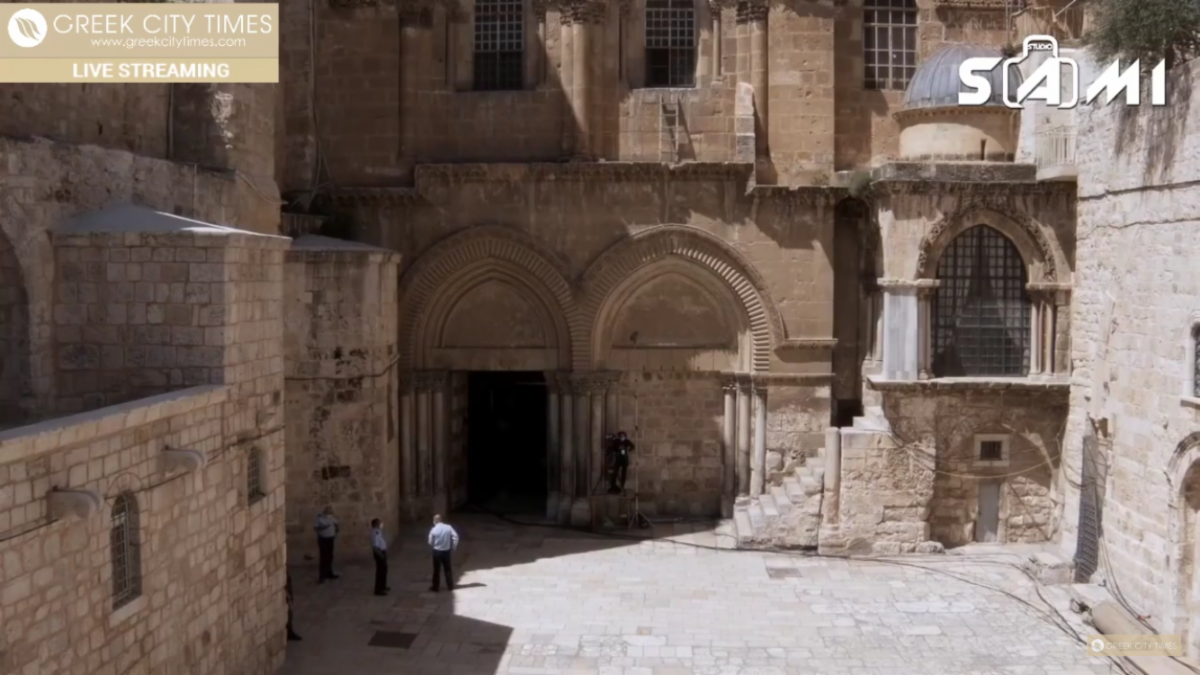 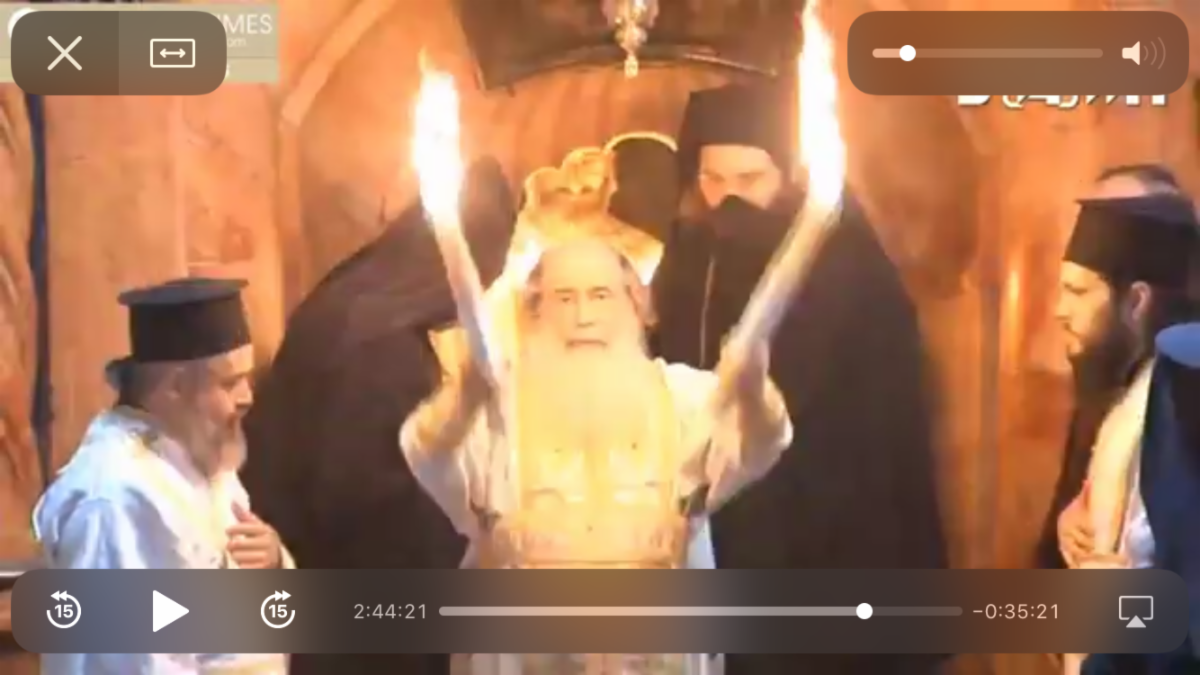 We've long wished for quiet in Jerusalem - but never did we expect the City of Peace to find this kind of peace.  See the video of the ceremony below -
and a Happy Easter to our Greek Orthodox neighbors.

And Happy Ridvan to our Baha'i friends too! Ridvan is the twelve holy days that commemorate Baháʼu'lláh's declaration that he was a Manifestation of God.
The three main Holy Days are April 20, April 28 and May 1, 2020.  Plus, for Muslims, Ramadan begins a week from today.  Very busy time for religious holidays! n Monday evening at 7, I'll be joined by Rev. Mark Lingle and Dr Kareem Adeeb in an interfaith dialogue on the spring holidays and the coronavirus.

Please join us for our weekly Healing & Hang Out today at 1 PM, this week featuring our Yom Hashoah commemoration, with Katie Kaplan and our 7th graders.  If you have a yellow candle or other yahrzeit candle, we will be lighting them at that time and it would be nice to see many lit together on the Zoom screen.

At this afternoon's session, we'll be hearing some of Judy Altmann's story.  For those who want to hear the whole talk you can find it here.  And here is a plethora of Yom Hashoah-related links and material.

It was startling last night to notice that, of all subjects, Anne Frank was trending on Twitter.  If you don't believe me, here's the proof: 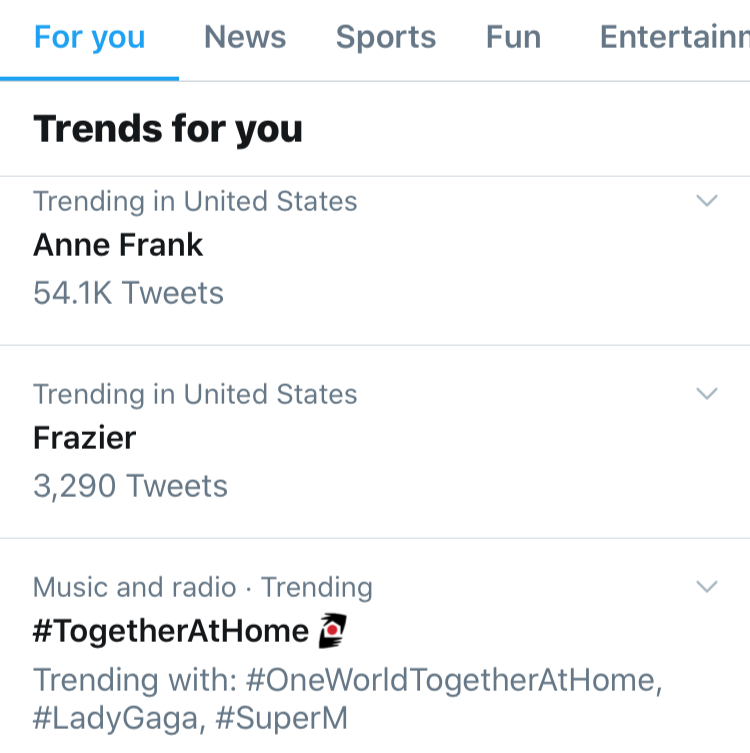 The question is, why?  "One World: Together at Home" was being broadcast on a gazillion platforms at that moment, yet even that trailed Anne.  I searched my brain, and Google (at this point I'm not sure where one ends and the other begins), and discovered, one possible reason: an Anne Frank memorial was defaced this week. 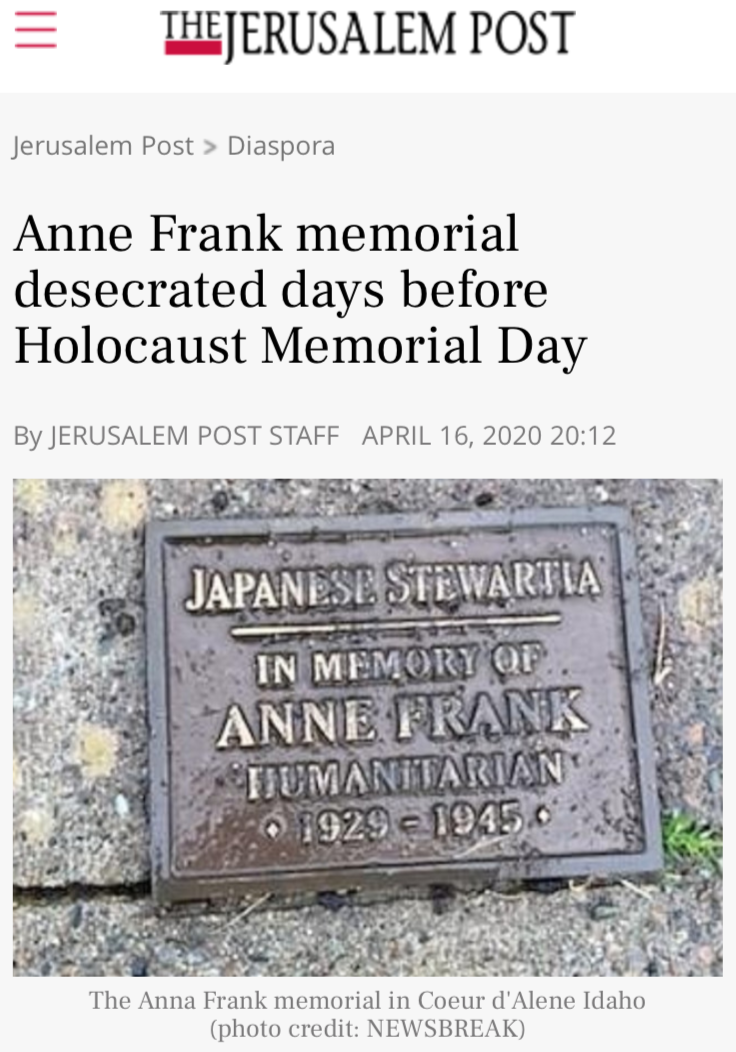 But as horrible as that is, that memorial in Idaho has been defaced before, Idaho being a hotbed of white supremacist Holocaust deniers. Sadly, anti-Semitic hate crimes are hardly a novelty these days - a horrific effort to firebomb a Massachusetts Jewish assisted living residence was thankfully foiled just a few days ago. So a hate crime by itself wouldn't have accounted for the sudden surge of interest in Anne.

One might claim that interest in Anne Frank is always high, and possibly never too far from the level of "trending."  But there is something more afoot here.

One is that many are making the comparison between our predicament and her's.  We've been forced to shelter-in-place with our families; Anne was too.  This analogy is superficial and has many flaws, but it can be useful in explaining our situation to children; we are not the first to have to endure living in such close quarters for so long a time, and we will certainly not be the last.  But our hardship pales in comparison to the hardship of others, including and especially those who hid during the Holocaust.

Anne is relatable for today's quarantined kids, because if you look at her diary as she would have, always remaining hopeful and blissfully unaware of what lay ahead  after the final pages were written, what we have is the story of a teenager in captivity, with all the banality, discovery, frivolity and even joy that Anne's diary expresses.

The second factor in Anne's sudden resurgence on Twitter is that people are revisiting that period with a renewed interest, and not simply because of Yom Hashoah.  True, Holocaust references have been ubiquitous for a long time - it's Godwin's Law that every political argument seems automatically to lead to someone bringing up Hitler.  But this weekend that trend has accelerated markedly. Here's an article on the front page of today's Jerusalem Post: 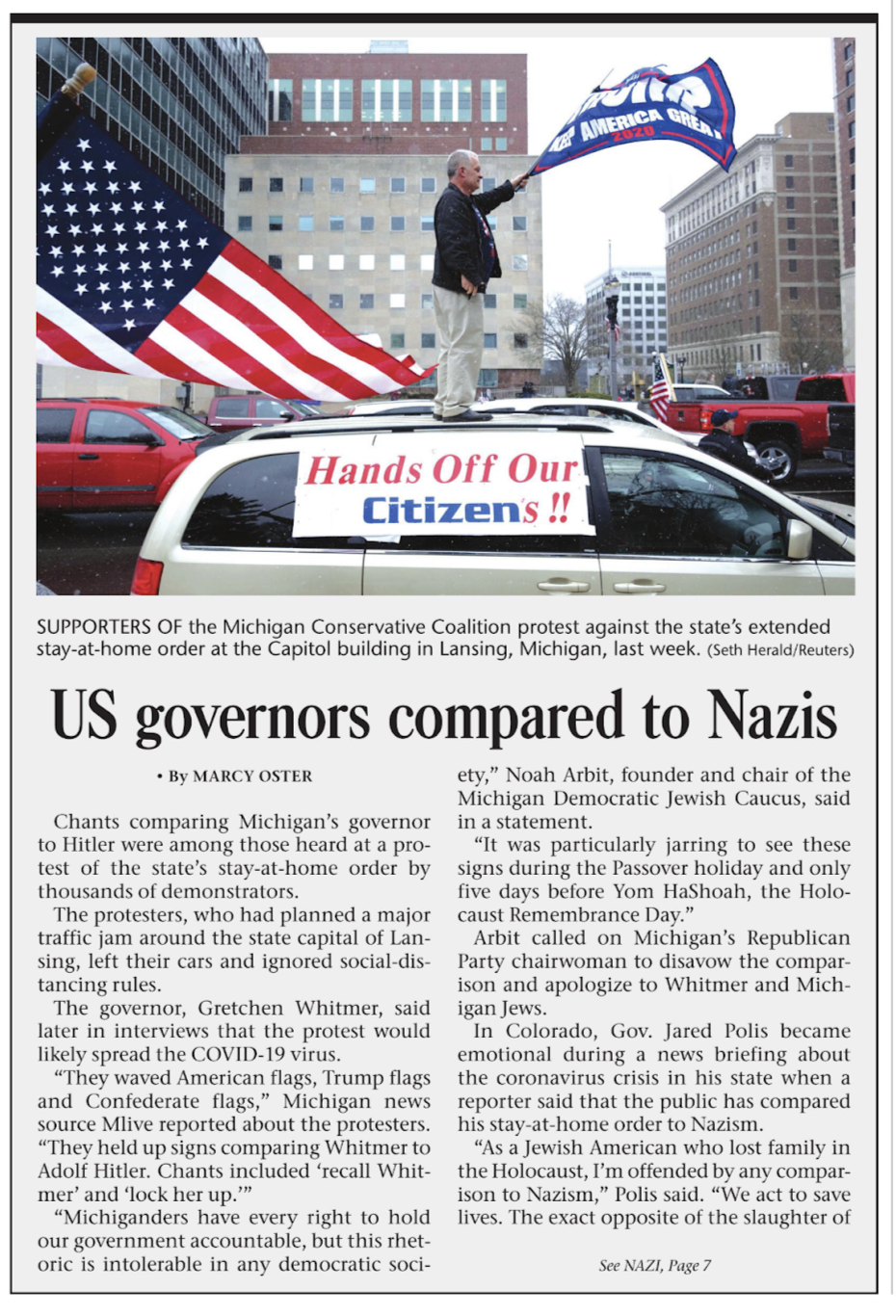 The Jerusalem Post is hardly a bastion of leftist propaganda, but it does have a special sensitivity to Holocaust terminology, and it cut to the chase of what is happening.  This morning, responding to those demonstrations, the Jewish Democratic Council tweeted this:

This would be terrifying in any context, but consider this - the POTUS is using a global pandemic that has killed thousands of Americans to rally extremists, amplifying reckless calls to disregard safety measures, and possibly incite violence. Horrifying.

Without being explicit, the JDC is suggesting that these demonstrations evoke images of Kristallnacht and other similar demonstrations (think the wedding scene of "Fiddler on the Roof").  While it's debatable whether these rallies are aiming to incite violence - I tend to think not, but the presence of guns is deliberately provocative - coming at a time that is already brimming with instability, it all adds to the feeling that an already fraying social fabric is unravelling.  And we Jews know that an unravelling social fabrics never lead to anything good.

That feeling of unraveling has lead people like CNN's Brian Stelter to write this today, explaining why he did not send out his daily newsletter yesterday:

Truth is, I hit a wall. Gutted by the death toll. Disturbed by the government's shortcomings. Dismayed by political rhetoric that bears no resemblance to reality. Worried about friends who are losing their jobs and kids who are missing school and senior citizens who are living in fear. I crawled in bed and cried for our pre-pandemic lives. I think those tears had been waiting a month to escape.
So the point is this: We are all feeling a bit Anne Frank-like right now.  A solid argument can be made that some of the protesters are feeling the same way, especially those who have been laid off.  We all feel helpless. But that does not excuse putting everyone else at risk by playing with fire and selfishly putting other people's lives at risk.
I am absolutely certain that we will get through this, if cooler heads prevail and the public health experts are allowed to lead the way.  Mistakes will be made, but constant testing will enable us to shift accordingly and we will get through. The Jewish people have survived worse than this.

And who will inspire us?  Holocaust survivors. See this article from yesterday's South Florida Sun Sentinal: " They survived the Holocaust. They say this pandemic, too, shall pass." 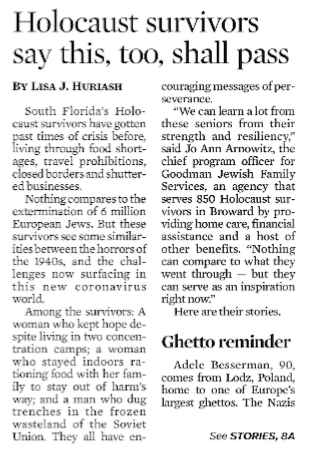 Here are their stories:
Reminded of the ghetto
Adele Besserman, 90, comes from Lodz, Poland, home to one of Europe's largest ghettos. The Nazis didn't allow free movement, and she remembers the food scarcity. "I do remember grandma saying to us, 'This is your dinner, nothing else.' I was hungry. Most of the time, we made something out of potatoes like pancakes - they called them latkes - very simple food.

"Once in awhile" they got "a good hot dinner. Most of the time it was potatoes and that kept us going. If they had leftover flour they used to make something with it. We also stayed in the house. It was hard to live like that. But it was a war. And we understood - us children - this too shall pass. With God's help, we will survive."

Her mother owned a beauty salon and she turned it over to one of her workers in exchange for a horse and buggy ride into the woods, where they were then smuggled past a river. "Now you are free to go wherever you want," the men told her mother. "I didn't understand, but my mother did."

The family escaped to Siberia. Her grandparents, aunts, uncles and friends left behind were murdered.

Today, being confined to her home "does remind me of the ghetto, it does remind me. Sometimes I am very depressed and I don't know why and then I realize that's how the times were. But we prayed for the good times," Besserman said.

"Right now I'm obeying whatever we are told to do for the better for me and the rest of the people, but I'll tell you the truth, this will pass," said Besserman, who is confined to her Hallandale Beach condo. "Everything is going to be normal again."

"We survived a war and we're here. We're going to survive this, too."

Taking it day by day

Sally Dauman, 93, of Hallandale Beach, also comes from Lodz. She lived in the ghetto for four years before being sent to two concentration camps - Auschwitz and Bergen-Belsen - before the war ended.
She has seen such horrors that it took years to be able to talk about it.
Still today, the memory of watching her older sister being shot to death in front of her still haunts her. Her sister had run after her two children, ages 6 and 3, who had been ripped from her by Nazis, but was stopped with a bullet.
"There is no comparison to what we went through because we had nothing to defend ourselves, we were thrown out from our homes, we were starving for food, and we didn't get any medical help," she said. "Typhoid was going around."
But still, she said a principle still applies today: Take it "day by day. It will get better."

'Help other people if you can'

Ilya Katz was born in 1935 in Leningrad in the former Soviet Union. Both his parents died after the Nazis invaded the Soviet Union in the summer of 1941. Katz was eventually sent to a gulag labor camp in Siberia for disagreeing with the government.
He was there for eight years. It was hell.
"There's a Soviet proverb: 'No work, no food,' " he said. "We were practically dead, we were hungry."
His job was digging trenches in the frozen wasteland.
Now a Hollywood resident, Katz, 85, said he is handling the virus pandemic with calm: "It's a different grade of the stress."
"Humor makes us stronger. There is an enemy but we can survive. To be positive is a good idea," he said. "We have water. We have electricity. We have refrigerator. We are not alone because we have TV. When people say, 'It's loneliness, it's terrible,' I can tell you: Keep your nose up, when you know other people in other countries went through much more difficult situations, take this optimism. Optimism depends from your sense of humor."
He takes comfort in knowing this is temporary.
"It will go, with help of God, with help of common sense, with sense of optimism," he said. "Be a good Samaritan. Help other people if you can."

Some recommended reading and viewing:

More basic than a crisis of faith: Will the virus upend ultra-Orthodox society? (Times of Israel).

The Rabbinical Assembly and the Schechter Institute co-published Megillat Hashoah - The Shoah Scroll - in five languages (Hebrew, English, French, Spanish and Russian) and it's been read every year at synagogues, schools and JCC's all over the world. This year, we will sponsor an international reading of Megillat Hashoah as a symbol of Jewish solidarity during the current crisis.  The reading will take place on Yom Hashoah, April 21st, at 11:00 AM Eastern time. Zoom link
Download the Shoah Scroll here.
Posted by Joshua Hammerman

Email ThisBlogThis!Share to TwitterShare to FacebookShare to Pinterest
Labels: coronavirus, Holocaust and Anti-Semitism