From the Rabbi's Bunker April 5: Was the 10th Plague a Coronavirus? What Would Philip Roth Say Now? 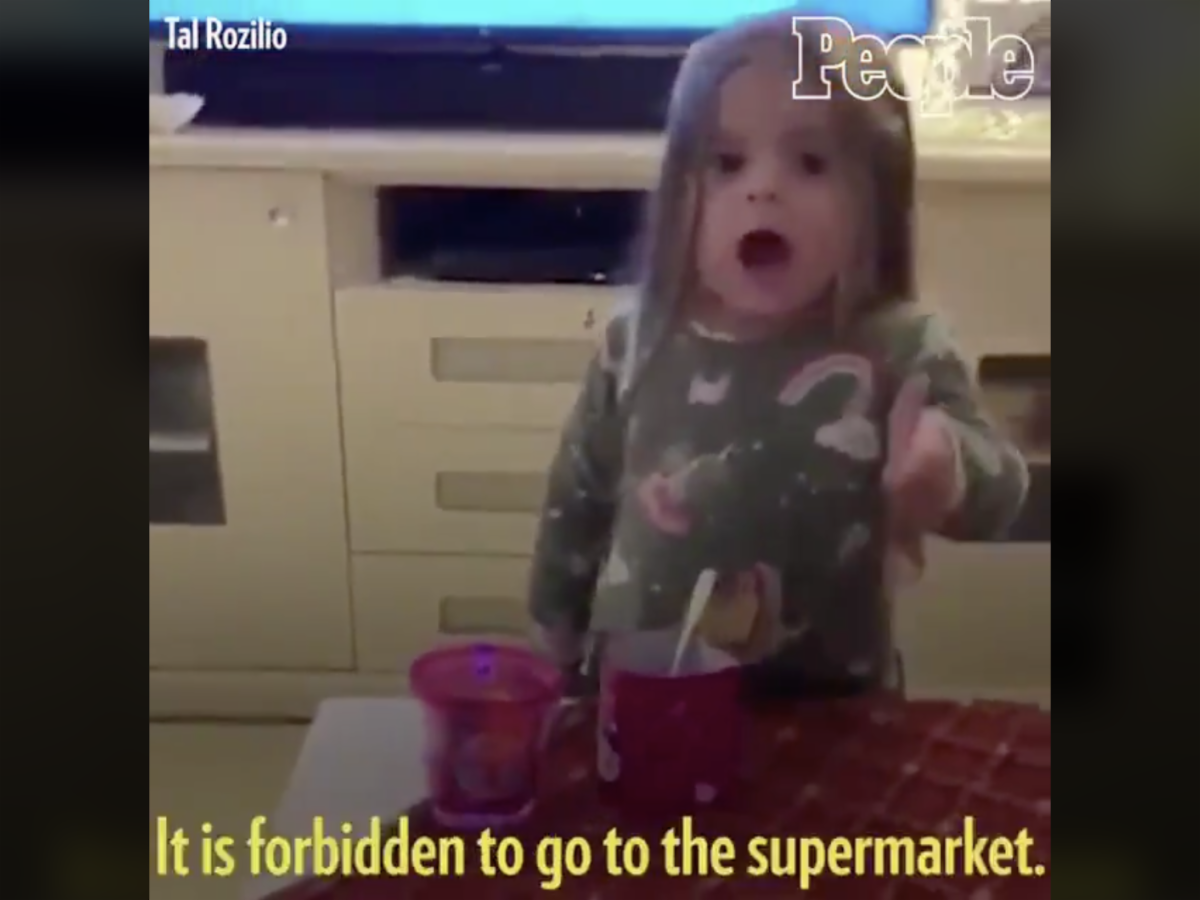 This Israeli child has become a big hit
as she explains the implications of the lockdown.
See the hilarious video here, with English subtitles

- Click here for archived dispatches from the Rabbi's Bunker

- Click here to view and download the Rabbinical Assembly Passover guide.
- If you need a Sale of Hametz Form, you can find it here. Sign and scan back to me.

- New Rituals for Passover (Ritualwell)
When you come to the temple parking lot to pick up Passover food on Wed. morning (or even if you have nothing to pick up) drop off bags of non perishable food for our emergency drive for the Food Bank.  Turn your hametz into a mitzvah!

- And yes, kippah masks are now all the rage - seriously.

Here in the bunker we're preparing to celebrate Dan's 27th birthday on Monday.   I am so proud of all he does, and more, of the kind, giving person that he is.  HAPPY BIRTHDAY, DAN!!

We had over 75 devices tuned into our Zoom Kabbalat Shabbat on Friday - so at least there is one positive number that keeps going up - we've seen plenty of depressing statistics also on the increase.  We somehow need to find the strength to remain hopeful - and to remain safely indoors.

Thanks to Lisa Gittelman-Udi for this screen shot from today's K-2 model Seder, which was loads of fun. 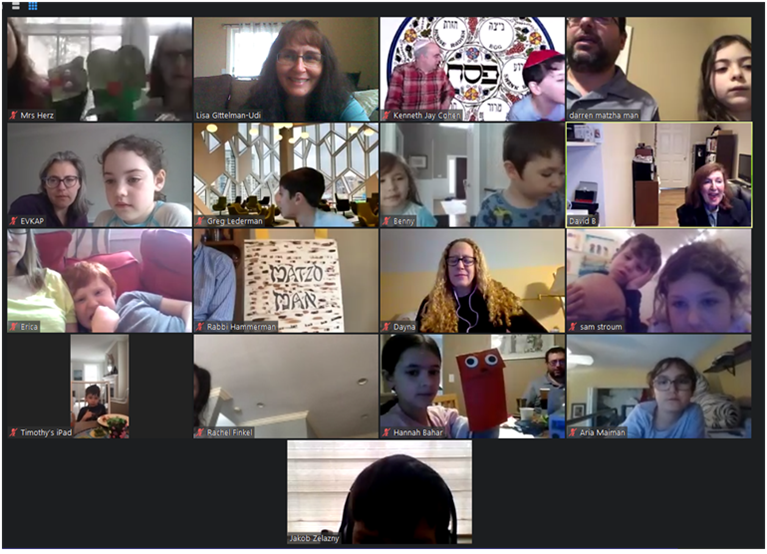 And to Jami Fener for these screen shots of 15 families attending yesterday's Shababimbam. 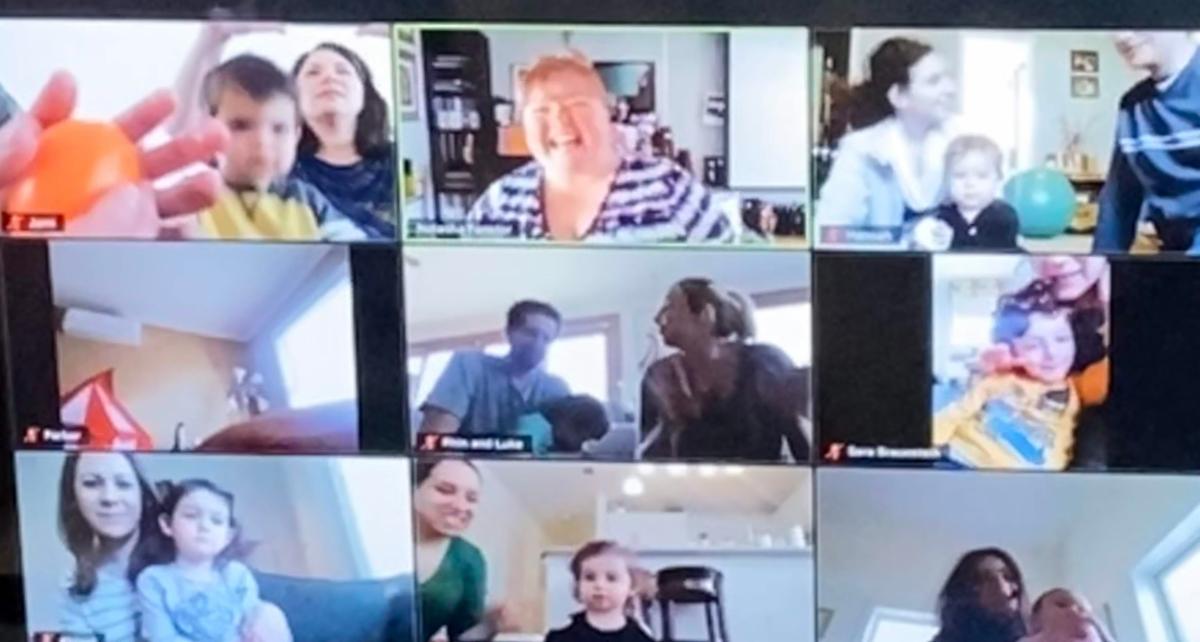 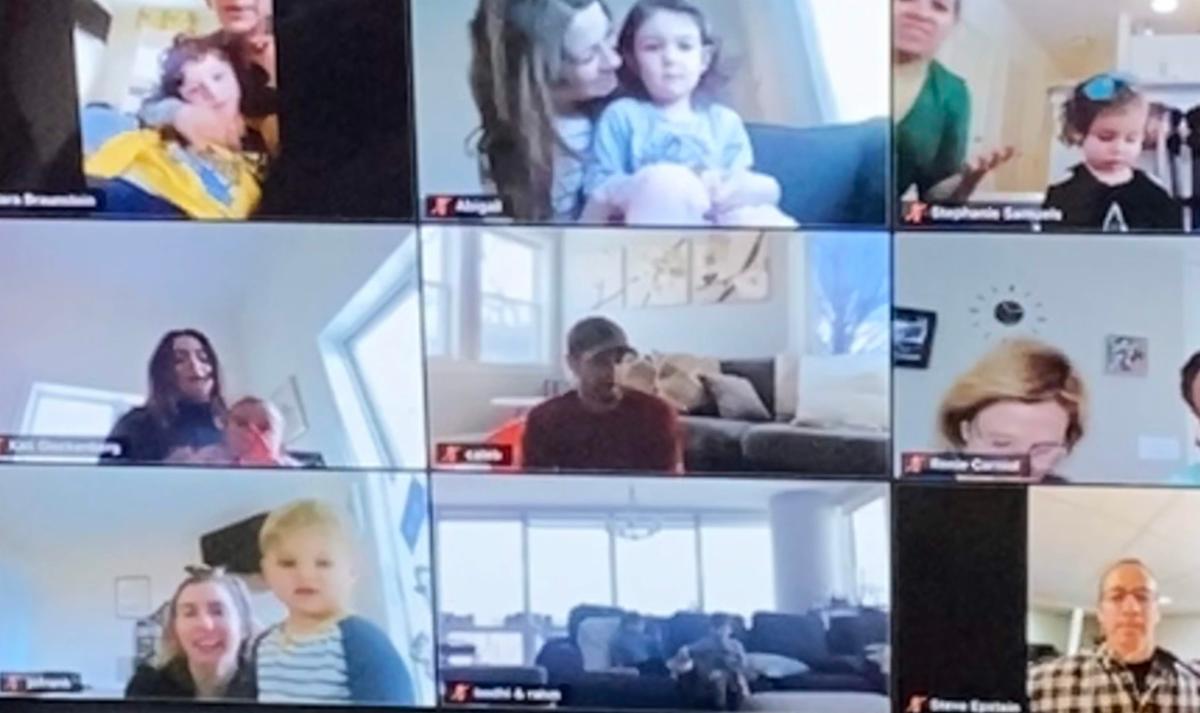 And to Kenneth Cohen for these screen shots from Friday evening's service: 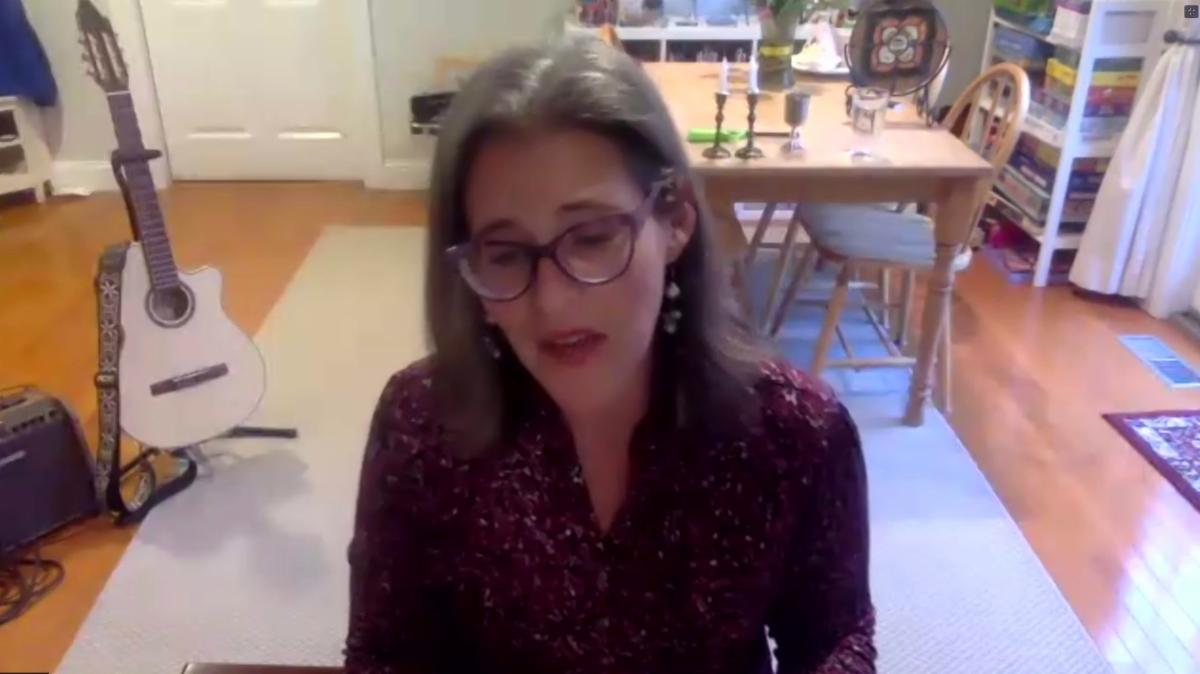 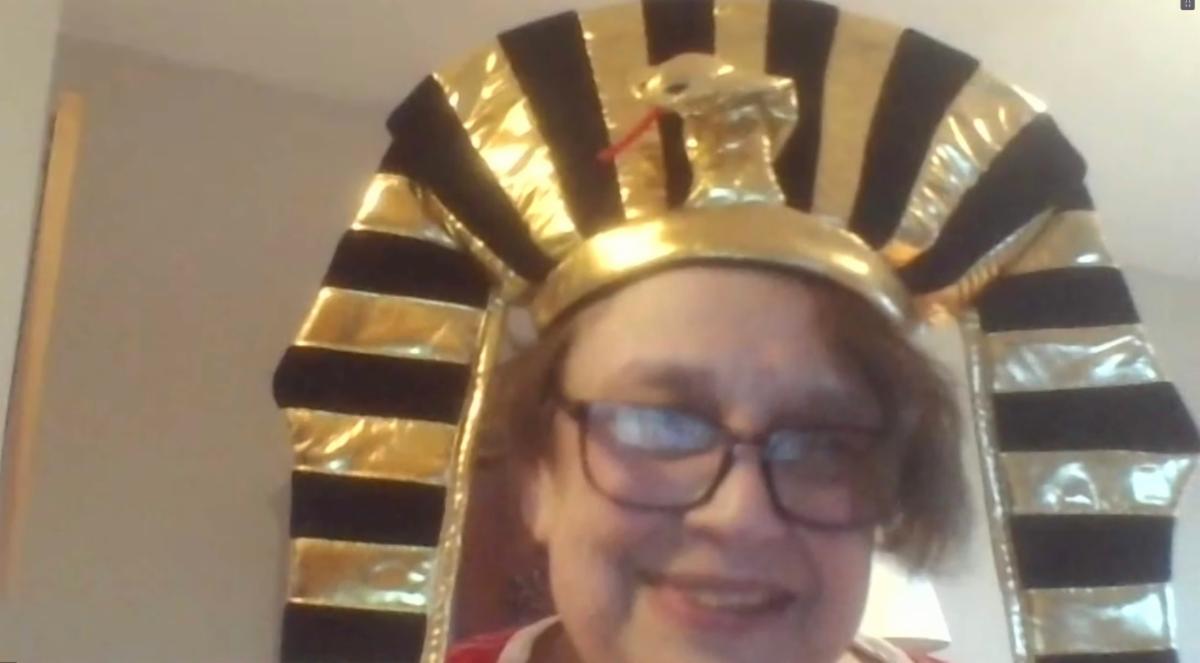 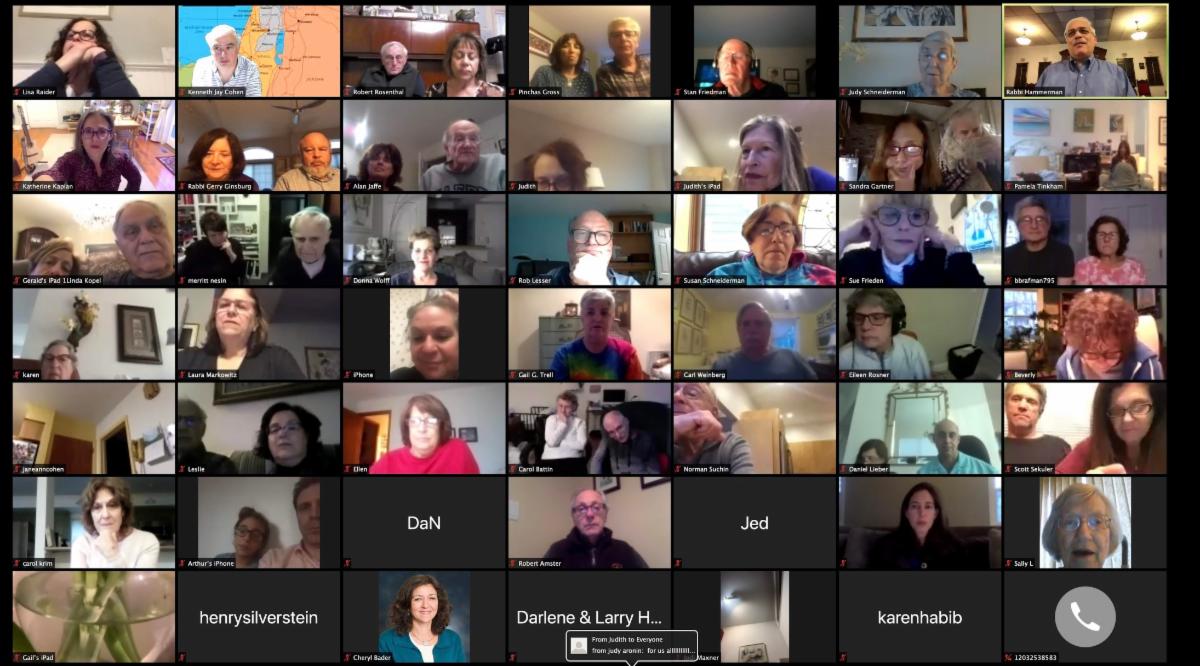 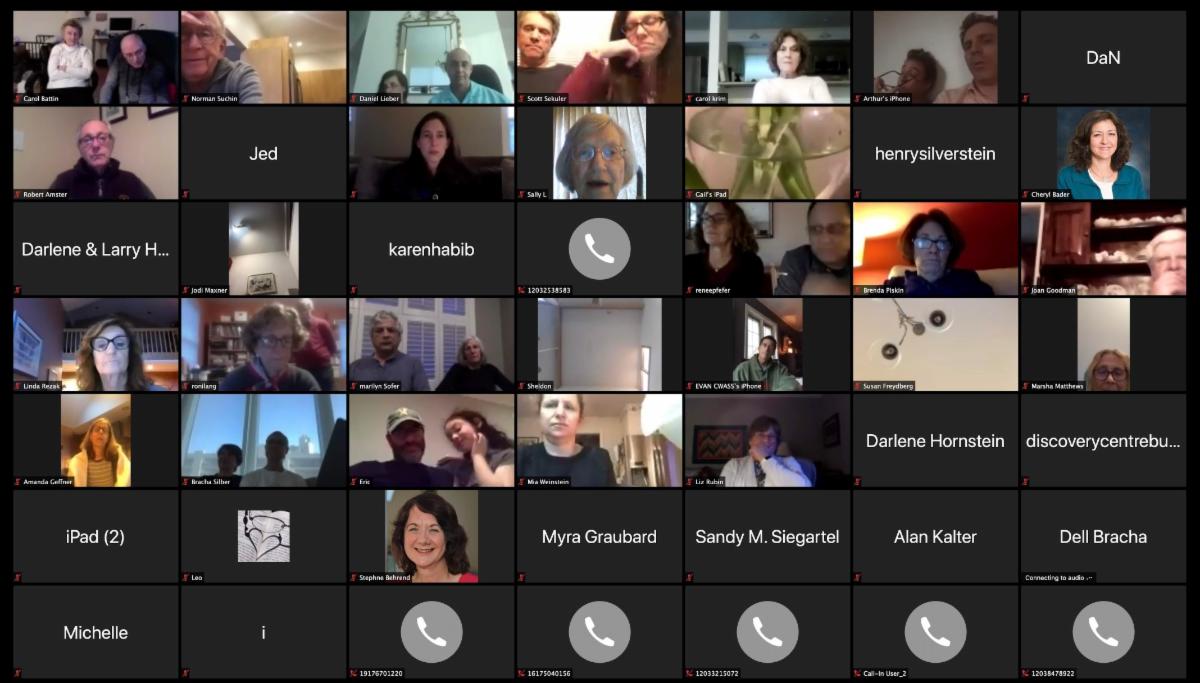 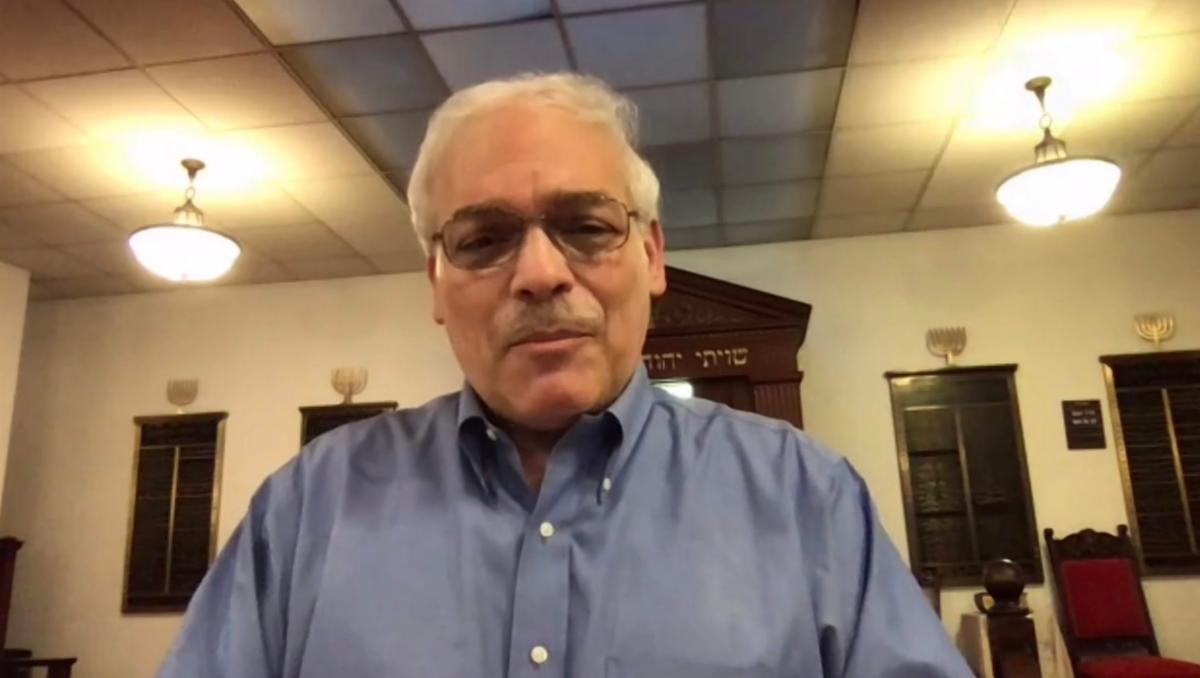 As you can detect, I led the service from inside the TBE chapel.  I was the only one in the building, which has been thoroughly cleaned.  I live next door, as most of you know; still, the journey from my house to God's house never seemed so distant and perilous.  I know it is comforting for you to see our building, so I may make the trek to TBE from time to time for a Zoom event - but I do not want to insinuate that anyone else should be leaving home.

Was the tenth plague a coronavirus? 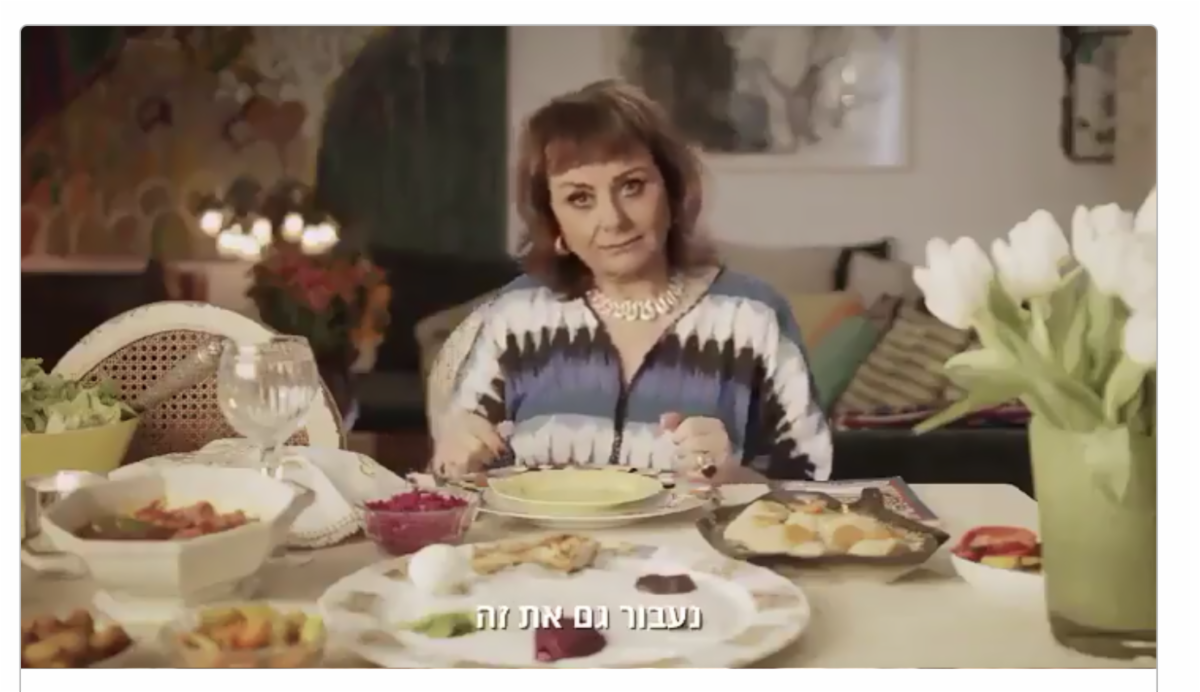 This PSA tells Israelis to stay home on Passover and keep those Seders small.

"We survived Pharaoh." she says, "We'll survive this."  See it here - the Hebrew is pretty simple.

I woke up this morning to the jarring realization that perhaps, just maybe, they survived the same thing that we are trying to survive.

I'm never one to over rationalize miracles.  I don't give much credence to those who suggest that the Red Sea's splitting was due to an unusually low tide during an eclipse, for instance, or that the plagues resulted from volcanic ash stemming from an eruption on the Greek island of Santorini.

But the way Covid-19 has forced us to take cover in our homes, as the Israelites did in Egypt, has made me wonder whether the Angel of Death may in fact have been a particularly virulent form of a coronavirus.  Check out these parallels:

- The plague attacked the first born; i.e. the oldest among them.
- The principle means of avoiding the plague was to huddle indoors with the immediate family -and to stay there until the danger had "passed over."
- Exodus 12:13 "...and when I see the blood, I will pass over you, and there shall no plague be upon you to destroy you, when I smite the land of Egypt." What blood does the Destroyer avoid? Could this be the blood containing antibodies from those who have had mild forms of the virus?
- The tenth plague and Passover took place on the 14th day of the month, precisely the outer limit for Covid-19's incubation period (2-14 days) following exposure.
- "And it came to pass at midnight, that Adonai smote all the firstborn in the land of Egypt, from the first-born of Pharaoh that sat on his throne unto the first-born of the captive that was in the dungeon; and all the first-born of cattle. (Ex.12:29). The coronavirus does not distinguish between rich and poor, urban or rural, blue state or red.
- "...And there was a great cry in Egypt." (Ex. 12:30).  People living in New York have commented about the eery silence of the streets, punctured only by the piercing cry of emergency sirens.

- The lambs blood on the door is not something I would recommend in this situation, but if you smear disinfectant instead - on all smooth surfaces - well then we're onto something.

One question that needs to be addressed: If the tenth plague was a coronavirus, why were the Israelites spared? In an article that appeared in the New York Times during the Ebola crisis a decade ago, Dr. Martin J. Blaser, a historian who is chairman of medicine at New York University's medical school, offered an intriguing hypothesis for why Jews became scapegoats in the medieval Black Death. They were largely spared, in comparison with other groups, "because grain was removed from their houses for Passover, discouraging the rats that spread the disease. That plague peaked in spring, around Passover."

So maybe the tenth plague also coincided with a springtime epidemic that was suppressed by the elimination of fermented grains from the diet. Who knows; we may discover in two weeks that the populations of Monsey and Crown Heights have been mysteriously released from the terrors of Covid-19 because the disease could not penetrate a cascade of matzah crumbs.

Or not. But meanwhile, as we join at our Seders on Wednesday night, Jews everywhere will be able to sense the same existential dread our forbearers felt. Perhaps they too feared awakening with that telltale dry cough, or that feeling of an anvil on their chest, or that spiking fever that brings a terror that not even a Pharaoh could match.

We survived Pharaoh. But will we survive this?

This year we are slaves to the disease. Next year, may we be a free nation - or to be more precise, a vacci-nation. 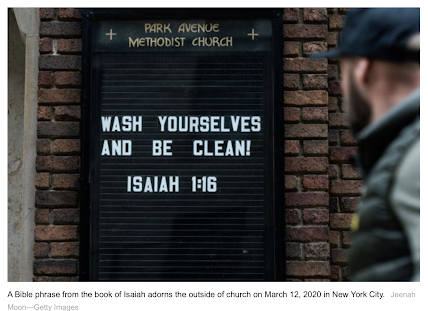 Malerie Yolen-Cohen sends along a new poem written by her cousin Heidi (whose mom is the well-known author Jane Yolen). Heidi wrote this for her own daughter, who lives in Atlanta and is organizing an online Seder for the family. And now, we can use it at our Seders too. Thank you so much to Malerie and Heidi!!

We Are Whole
Why is this night different from all other nights?
Our people have been persecuted and prosecuted,
converted and run into hiding,
imprisoned and slaughtered.
Being together-
being one--
has never kept us safe.
But it has kept us whole.
Why is this night different from all other nights?
We are together but not together.
We are apart,
and still we are parts
of our whole.
We cannot hold hands
around a table
signifying our oneness,
our beginnings and endings
being a circle of love,
and faith,
and hope.
How is this night different from all other nights?
The distance between us
is farther
and colder
and yet-
and yet,
this distance is not wider than our hearts.
No space is too far for us to remember where we came from,
how we fought
what we lost--
but, also what we have gained.
I hold your hand,
and yours, and yours, and yours,
in metaphor only,
and our circle grows wider for the space between.
It grows
to include those who came before,
who endured, who persisted, who preserved,
and those who did not.
But, also those who WILL endure, persist, and preserve--
though war, and famine,
through plagues--
ancient
and new.
How is this night different from all other nights?
Maybe the answer is that
it is not.
Because, we will join together,
rise up,
meet all challenges at the gate,
standing side-by-side,
in rows of strength,
to turn all tides,
defeat--
or befriend--
all foes,
armed with love and faith and hope,
and each other.
Because, tonight we ARE
love and faith and hope--
and we are whole.
Poem by Heidi E.Y. Stemple
Passover 2020 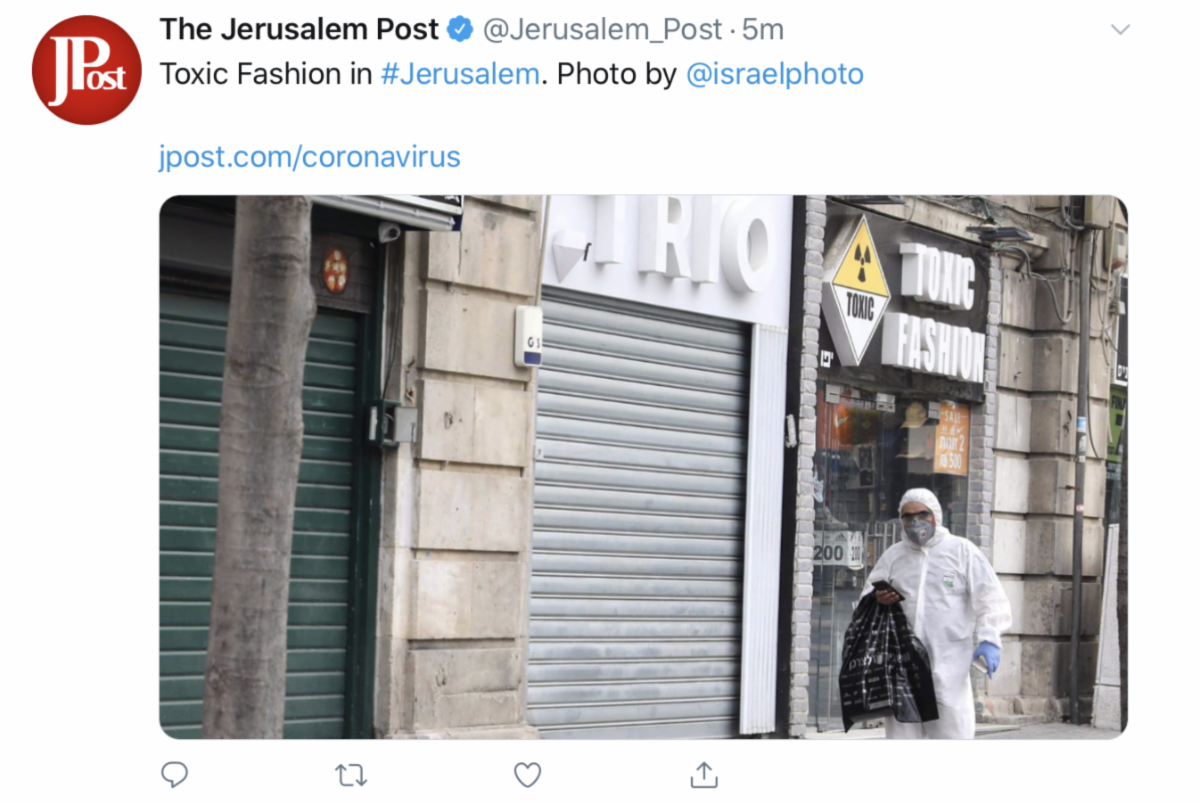 For thousands of years, Jerusalem has captured our hearts and souls with its indescribable magnetism. For the first time, the holiest sites of Jerusalem have been captured using both volumetric scanning, and Stereo 360 VR filming. In one of the most complex volumetric VR projects produced to date, an inter-faith team of Jewish, Christian, and Muslim innovators has brought their unique perspectives to the magic and wonder of Jerusalem. The innovative documentary experience captures this energy and invites you to immerse yourself in Jerusalemʼs Old City through a transcendent stereoscopic 360 degrees Virtual Reality Documentary. Beyond what a traditional documentary could offer, VR has the power to affect the user in ways that mirror actual experience, making you feel as if you are actually there! Find out more at the Tower of David Museum site and watch the preview video below:
The Plot Against America

For those who have been watching lots of TV lately, two series of special Jewish interest have been Netflix's "Unorthodox," and HBO's take on the Philip Roth novel, "The Plot Against America." After watching these, we can begin to ask ourselves, as Vanity Fair recently did, when did TV suddenly become so Jewish? (And there's more to come, with a popular Israeli series, "The Baker and the Beauty" soon to come to ABC, though in this case Jews have been replaced by other ethnicities). And these shows are not simply Jewish, but hard core Jewish - "Unorthodox" displays haredi life as never before seen on mainstream television, with exquisite detail of a Satmar wedding and much of the dialogue in Yiddish.

"Plot" also brings us a real slice of Jewish life of its era, though the authenticity slips in a few spots (like anachronistically using a 1970's camp version of the Alenu prayer), but those slips are few and far between.

But what appears most authentic is the premise that xenophobia could lead America in a decidedly undemocratic direction, and that the canary in the coal mine of intolerance and hate in such a country would be, as it always has been, the Jews.

Roth himself was optimistic about the resilience of the American people. Shortly after the publication of "The Plot Against America" in 2004, he wrote an essay about it in the New York Times Book Review.  The essay was later published as part of a collection of his nonfiction writings, in the Library of America collection, "Why Write.'  You can find the full essay here. Here is an excerpt, as he writes about that fateful election of 1940, when the isolationist and anti-Semitic America Firsters, led by Charles Lindbergh, chose not to run for the presidency, despite their immense popularity, leaving a much weaker Wendell Wilkie to lose to FDR, who then, a year later, was able to lead the nation into World War Two. 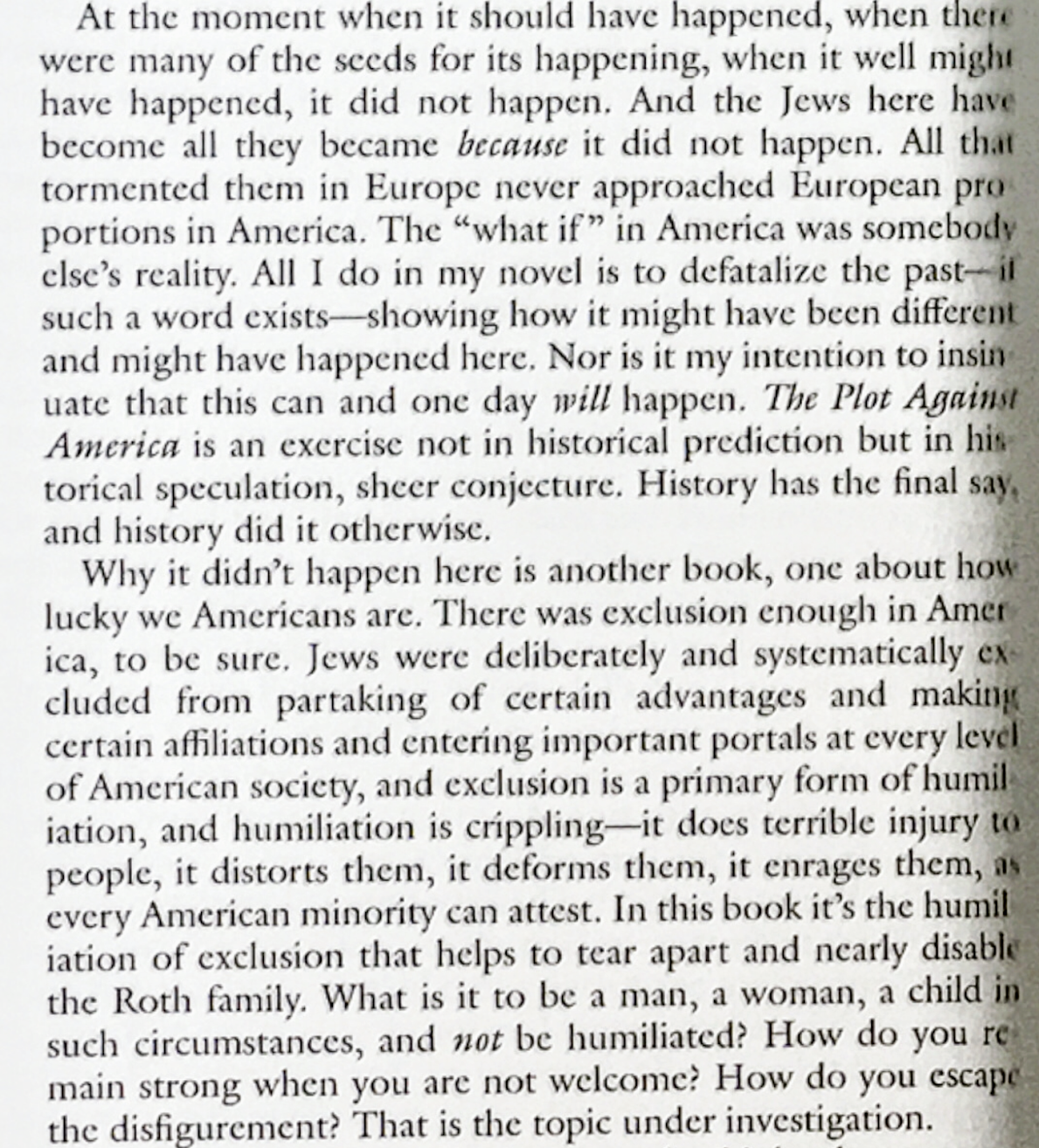 So let's give Roth his due. In this 2004 essay, he states unambiguously that the America that he lived in, the America of George W Bush, could never tip over into the kind of cauldron of hate that his book imagines. But before his death a couple of years ago, Roth made no such disclaimer regarding the current administration. So, what would Philip Roth be saying now?

From the Bunker, stay well and a zissen Pesach.